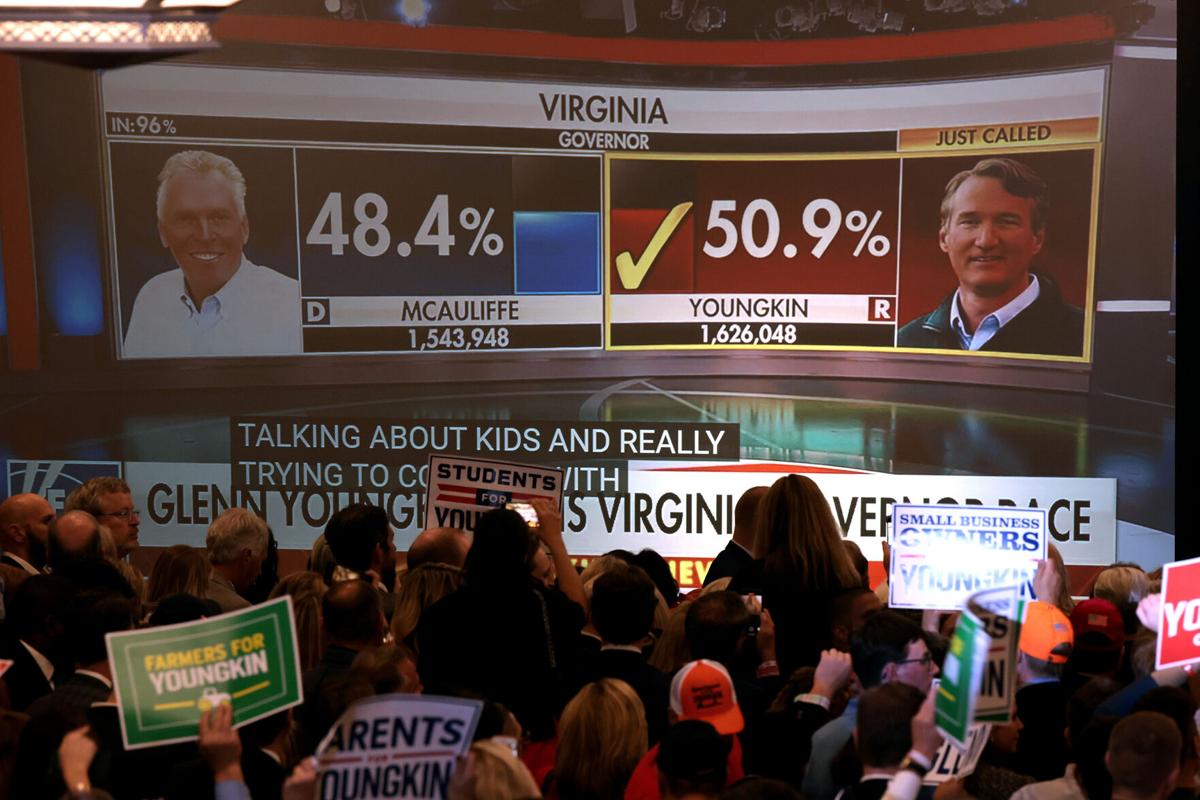 Supporters of Virginia Republican gubernatorial candidate Glenn Youngkin watch as Fox News calls the election for him during an election night rally at the Westfields Marriott Washington Dulles on Nov. 2 in Chantilly.

Republicans are in a triumphalist mood. Last week’s red wave election has many in the GOP counting on a crimson tsunami come next year’s midterms and fueled even more confidence that Joe Biden will be a one-term president. Some skepticism is in order, though a little triumphalism is warranted as well.

Democrats can obsess all they want about alleged racist dog whistles in Virginia to explain how Glenn Youngkin, the Republican candidate for governor — and Winsome Sears, the Black Republican candidate for lieutenant governor — won so handily, flipping Democratic counties red, out-performing former President Trump’s 2020 margins everywhere, and erasing Biden’s huge margins in 2020. Even if you believe that the GOP bought the Virginia victory on the race card, it doesn’t explain why New Jersey Gov. Phil Murphy won by a very slim margin against his Republican challenger when Biden had a 16-point margin of victory in New Jersey against Trump in 2020.

How the midterms will go depends largely on events outside of Republican control, partly for the obvious reason that Republicans don’t control anything in Washington. If the congressional elections were last week, it’s not unreasonable to think the Democrats might have lost 40 or 50 seats in the House and several seats in the Senate. But a year from now the supply chain problems could be worked out, the Delta variant and inflation a distant memory, and the overall economy heading back to the post-COVID boom we thought was coming early last summer. If schools have a return to normalcy too, perhaps the parent revolt in Virginia and New Jersey will dissipate. Also, the bipartisan infrastructure package Biden secured on Friday may turn out to be popular enough to make everyone forget the ugliness of the process that delivered it.

The biggest X factor, however, is Trump. Some Republicans believe that Youngkin’s hyper-disciplined campaign shows the path out of the Trump captivity: Take his endorsement, praise him enough not to make him or his supporters mad, but not so much that you alienate independents and anti-Trump Republicans. This needle-threading ruined former Democratic governor Terry McAuliffe’s plan to repeat California Gov. Gavin Newsom’s recent recall strategy of running against Trump.

Here’s the problem: This strategy depended not just on Youngkin’s discipline but on Trump’s as well. Trump wisely didn’t get in Youngkin’s way, despite desperate taunting from McAuliffe with even Biden joining in. Youngkin proved that if Trump is a team player and doesn’t tell his voters to stay home (as he essentially did in the Georgia January Senate runoffs, costing two seats) they’ll come out. Any formula that hinges on Trump’s being a team player is going to run into trouble. ABC’s Jonathan Karl reports in his new book that last January, Trump wanted to leave the GOP and start his own party.

Besides, in the wake of Virginia’s election, a strategy premised on the idea that the secret to success is keeping Trump at arm’s length is particularly fraught. Even if Trump isn’t planning to run for president in 2024, he will not tolerate the idea that he’s not the leader of the Republican Party. Unsurprisingly, Trump has already said he’ll be “very involved” in the midterms, which means the Youngkin strategy is already something of a nonstarter.

Fortunately for Republicans, there’s considerable room for Trump to meddle in the midterms — and exact more vengeance on those who supported impeachment — without hampering the party’s ability to take back the majority in the House. However, the Senate, which requires candidates to run statewide with more diverse electorates, could be a different story.

The real question is 2024. One of the lessons of last week’s elections is that Republicans can win back suburban and independent voters by talking about real issues, exploiting Biden’s weaknesses, and highlighting the Democrats’ excesses. If Trump is in the race, he has made it clear what he’ll talk about. “If we don’t solve the Presidential Election Fraud of 2020,” Trump said last month, “Republicans will not be voting in ’22 or ’24. It’s the single most important thing for Republicans to do.”

Youngkin could avoid talking about Trump’s false claims about a stolen election while running for governor without antagonizing Trump or his superfans. It’s a lot harder to sidestep Trump when he’s actually onstage with you in a presidential debate.

One of the lessons of last week’s elections is that Republicans can win back suburban and independent voters by talking about real issues, exploiting Biden’s weaknesses, and highlighting the Democrats’ excesses.

Supporters of Virginia Republican gubernatorial candidate Glenn Youngkin watch as Fox News calls the election for him during an election night rally at the Westfields Marriott Washington Dulles on Nov. 2 in Chantilly.