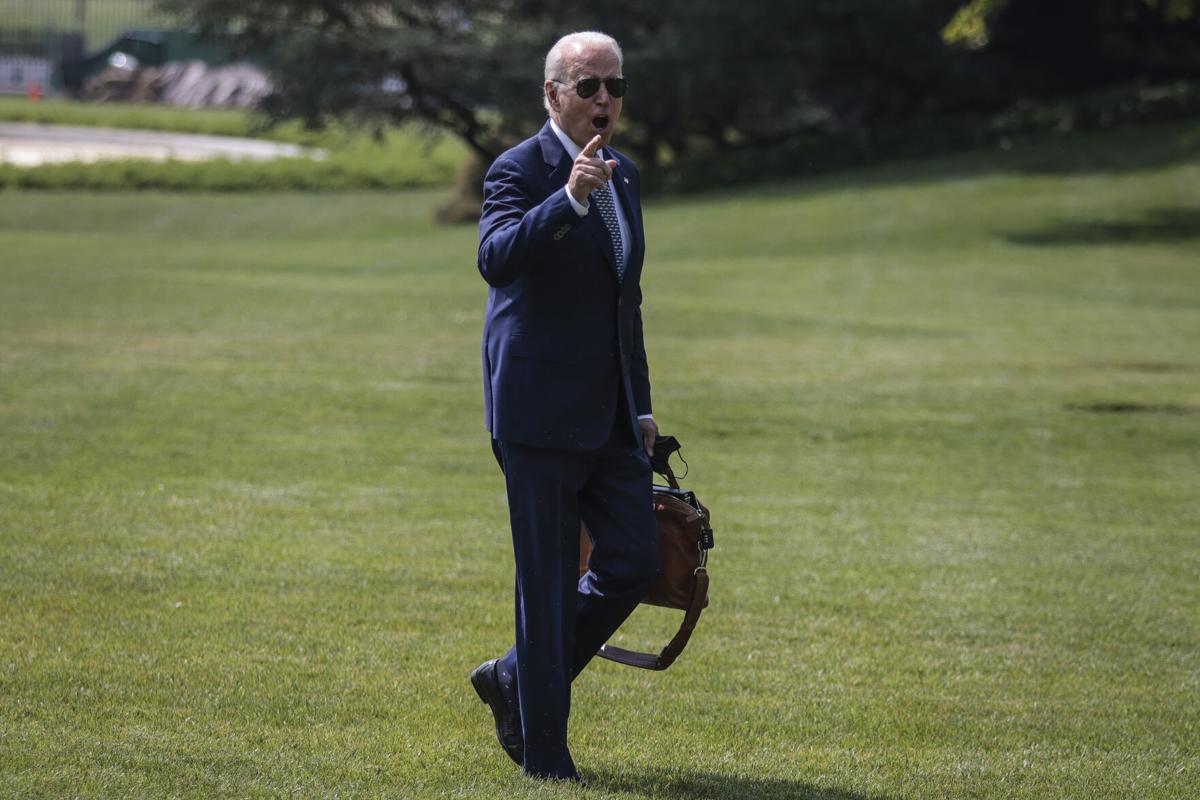 President Joe Biden walks from Marine One after arriving on the South Lawn of the White House on Tuesday.

President Joe Biden has already violated his oath of office. The good news for him: He’s in fine company.

In 2002, George W. Bush signed the McCain-Feingold campaign finance bill into law. At the ceremony, he expressed his “concerns” that the law he signed “restrains the speech of a wide variety of groups on issues of public import in the months closest to an election.” He added, deflecting from his own responsibilities, “I expect that the courts will resolve these legitimate legal questions as appropriate under the law.”

From 2011 to 2014, Barack Obama said over and over again that he could not unilaterally overturn or subvert laws passed by Congress and change the immigration status of “Dreamers.” “I’m not a king. I am the head of the executive branch of government. I’m required to follow the law,” he said in January 2013. A month later, he reiterated that view: “I’m not the emperor of the United States. My job is to execute laws that are passed, and Congress right now has not changed what I consider to be a broken immigration system.”

Then, in November 2014, Obama signed an executive order doing it anyway.

We can skip Donald Trump’s track record on violations of the oath of office, since he was impeached twice.

And now there’s Biden. Last week, his administration issued a “new” moratorium on renter evictions, essentially reissuing the one imposed by the Centers for Disease Control and Prevention in September as a public health measure during the pandemic. The Supreme Court said in June that the CDC had no authority to issue a nationwide moratorium. But Justice Brett Kavanaugh, writing for the majority, told the administration that it could let the old moratorium expire on July 31 rather than eliminate it immediately, since it had only weeks left on the clock. If the administration wanted a new moratorium after July, he said “clear and specific congressional authorization (via new legislation) would be necessary.”

On July 31, the moratorium expired without congressional action. On Aug. 2, White House adviser Gene Sperling was asked if the administration could unilaterally extend the moratorium. His answer was that it couldn’t find legal authority to do so.

“The bulk of the constitutional scholarship says that it’s not likely to pass constitutional muster,” Biden conceded a day later. Yet, he added, “at a minimum, by the time it gets litigated, it will probably give some additional time while we’re getting that $45 billion out to people who are, in fact, behind in the rent and don’t have the money.”

This is no way to run a constitutional republic.

The president takes an oath to “faithfully execute” the laws and to “preserve, protect and defend” the Constitution. Biden, Bush and Obama, by their own admission, believed their actions ran afoul of the law and/or the Constitution. But politically, it was easier to pass the trash to the Supreme Court so the court could take the political heat.

You can be sure that when the court invalidates this new moratorium, Democrats — and probably some Republicans who’ve kept their heads down through all of this — will feign outrage at the court’s “callousness.”

But we should all be outraged by the cowardice of elected politicians who find their jobs too difficult to do within the bounds of their oaths.

And frankly, we should be outraged at ourselves. It’s a rare day that fidelity to the Constitution is demanded by the people or the press except when it’s a useful talking point about a partisan disagreement. When Obama reversed himself on DACA, the Washington Post dubbed him a flip-flopper. That’s great, but flip-flopping is faint criticism for a president who, by his own standard, had behaved as an “emperor” or “king” outside his constitutional authority.

The elected branches of government routinely behave like a parent who can’t say no and cops out with “Go ask your mother” or “Go ask your father” to avoid being the heavy.

I’m with the conservatives on this. But the fact remains that politicians would rather the justices play the heavy than do the jobs they swore to do. Of course, Biden won’t be penalized, much less impeached, for the same reason Bush and Obama weren’t: No one really cares. While I can live with that, I’d rather live in a country where politicians were terrified of violating their oaths.

President Joe Biden walks from Marine One after arriving on the South Lawn of the White House on Tuesday.