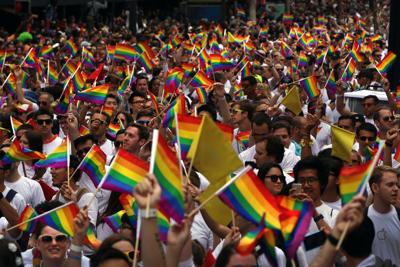 The U.S. Senate has taken a major step toward protecting same-sex and interracial marriage by advancing a landmark bill that would rightfully recognize the legality of such marriages in every state in the nation.

The bill would not force states without same-sex laws to permit such unions, but it would require that all states recognize the legality of marriages performed in other states.

The bill also would repeal the indefensible Defense of Marriage Act, which passed in 1996 and codified marriage as only the union of one man and one woman. Later found unconstitutional, DOMA also gave states the right to refuse to recognize same-sex marriages performed in other states.

A block of all 50 Democrats and a dozen Republicans united last week to form a filibuster-proof coalition to get the bill through a procedural vote, the most serious hurdle it's expected to face. The Respect for Marriage Act will move to a full Senate vote shortly after Thanksgiving and then to the House, which passed its own version earlier.

Tampa Bay Times: Americans have agreed to agree on lots of issues, including same-sex marriage, marijuana

U.S. Sen. Amy Klobuchar, D-Minn., told an editorial writer that the bill is not only "highly significant" but necessary to ensure the Supreme Court cannot do to marriage rights what it did earlier this year to abortion rights.

In Dobbs, the court overturned its precedent of 50 years, finding that the Constitution did not guarantee the right to an abortion. In a concurring opinion, Justice Clarence Thomas stated that the same rationale applied in Dobbs could be used to overturn rights to same-sex marriage, contraception and same-sex consensual relations. Thomas was part of a strong, six-justice conservative bloc, and his words carried far more weight than they would have in earlier courts, sounding alarm bells among those who thought such issues had been long settled.

"Dobbs to me was proof that the court is out of kilter with where the American people are," Klobuchar said. Thankfully, she said, "our founders set up a system of checks and balances. Well, this is the check. When one branch gets out of kilter, another steps in."

Lawmakers have, in fact, relied too heavily on courts to decide matters best addressed through statute. What the courts can do, they can also undo — especially when, as with the Roberts court, even long-standing precedent is seen as no barrier.

Many states had anti-miscegenation laws prohibiting interracial marriage until the 1967 landmark case of Loving v. Virginia found such laws unconstitutional. At the time, Chief Justice Earl Warren wrote that "the freedom to marry, or not marry, a person of another race resides with the individual, and cannot be infringed by the State."

Even so, it would be more than 30 years before all such state laws were repealed. Alabama was the last, in 2000. Similarly, when the Dobbs decision threw the abortion issue back to the states, many still had old laws on the books or had passed so-called trigger laws. The result was an immediate reversion in those states to laws that strictly limited or banned most abortions. The right to same-sex marriage is protected under the Obergefell decision, but if that were overturned, same-sex couples could find their unions under fire. ...

Minnesota, wisely, took steps some years ago to give its same-sex couples full protection under the law. In Minnesota, not only was a proposed state amendment barring same-sex marriage defeated at the polls, but the Legislature went further and in 2013 put the right to same-sex marriage in statute.

Klobuchar noted that the coalition that allowed the Respect for Marriage Act to clear its latest hurdle was some time in the making, and required patience and discipline. "We could have brought this issue up before the election, but we didn't push it just to make [Republicans] look bad." Such a move, she said, could have poisoned months of work and a still-fragile coalition. "What we wanted was to get this done," she said.

Senate Majority Leader Chuck Schumer said of the bill: "No one — no one — in a same-sex marriage should have to worry about whether or not their marriage will be invalidated in the future. They deserve peace of mind, knowing their rights will always be protected under the law." Schumer's daughter is married to another woman, and the couple is expecting a baby in the spring.

Klobuchar noted that there is often a temptation in politics to "save" an issue that may prove more useful for fundraising and stirring up the base. "A lot of times these issues just sit out there and people continue to use them, which is sad," she said. "If you have the opportunity to vote to solve a problem, you should."

“Let’s turn on the local TV news to find out who’s shooting whom.” That’s what I say to Mrs. Palm these days at 6 p.m.

Williams: Now is no time to feed anti-LGBTQ bigotry. The Youngkin administration needs to rescind its proposed transgender policies.

🎧 Episode 65: The hosts discuss the tricky balance of holding people accountable for their actions but the danger in taking things too far.

David Silverman, an expert in early American and Native American history, discusses the history of Thanksgiving.

“I don’t own this job. Anybody who wants to run for it can feel free to do so,” Senate Republican Leader Mitch McConnell said Wednesday. “I’m …

If former Vice President Mike Pence is ever in need of a character witness, he could not do much better than one statement former President Do…

The midterm elections seem to have set American politics up for some new forms of turmoil. Most of it will grow out of the Republican world’s …

Commentary: If we want long-term solutions to our social ills, we must work to make our institutions better at ensuring justice for all.

Scott Jennings: Independents may not like Biden, but they abhor Trump

I thought I was taking crazy pills on the set of CNN’s “Election Night in America” show on Nov. 8, leafing through the pages of exit polls just before the returns started rolling in.

Concern about student accused in killings should have prompted more worry, action