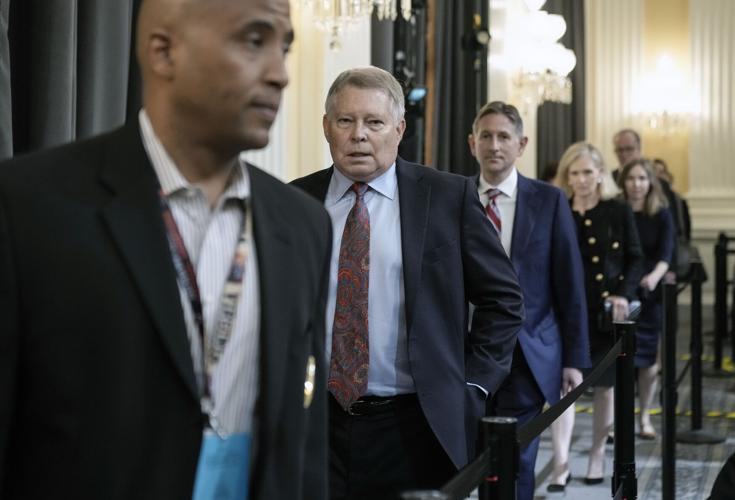 Sometimes in the art of political stagecraft, an entire debate can shift on a single statement.

Former Nixon aide John Dean comes to mind. His declaration during the Watergate hearings of “a cancer growing on the presidency” stands out as a pivotal moment that helped grease President Richard Nixon’s slide from office to early retirement.

A similarly pivotal moment seemed to show itself on the third day of Jan. 6 committee hearings, when J. Michael Luttig, a retired federal judge with solid conservative Republican credentials, declared slowly and softly, yet also powerfully, that “Donald Trump and his allies and supporters are a clear and present danger to American democracy.”

He is not, by any stretch of the imagination, a man to be easily dismissed as Trump often does as some sort of a woke, knee-jerk, Trump-hating, lefty-progressive liberal.

As a former judge on the U.S. Court of Appeals for the 4th Circuit, Luttig, appointed by President George H.W. Bush, earned a reputation as one of the country’s most prominent and conservative judges.

Often mentioned as a possible Supreme Court nominee himself, he sent more than 40 clerks into Supreme Court clerkships, 33 of whom worked for conservatives Justices Antonin Scalia and Clarence Thomas.

Yet, he has earned respect across party lines in the way Washington’s “wise men” from both parties used to in less polarized times. That’s important at a time when the Jan. 6 committee itself struggles against perceptions of partisan unfairness.

Luttig brought a respect for the larger stakes at issue. Had then Vice President Mike Pence carried out Trump’s demand to refuse to count electoral votes won by Democrat Joe Biden in the 2020 election, he pointed out, the nation would have plunged into “what I believe would have been tantamount to a revolution within a constitutional crisis in America,” Luttig said, “which, in my view, … would have been the first constitutional crisis since the founding of the republic.”

Actually, as much as I respect the judge’s scholarship, I recall an earlier constitutional crisis from my history books: the disputed presidential election of 1876.

After several states submitted competing slates of electors that year, a divided Congress was unable to resolve the deadlock for weeks. The result, as you may recall from history classes, was the Compromise of 1877, an unwritten handshake deal that, among other consequences, resulted in the federal government pulling its last post-Civil War troops out of the South and ending the Reconstruction Era.

That was part of the deal that awarded the presidency to Republican Rutherford B. Hayes, who narrowly lost the popular vote, over Democrat Samuel J. Tilden, in exchange for the troop withdrawal.

This historical epic hits home with me as a descendant of Black American slaves. Black Republicans, loyal to the party of Abraham Lincoln, felt betrayed by the Hayes-Tilden compromise for good reasons. Their rights, including the right to vote, were withdrawn too, as the “Black Codes” and “Jim Crow segregation,” among other forms of “slavery by another name,” took hold.

Elections have consequences, as the saying goes, and so do backroom deals made in place of elections to choose our political leaders. Luttig has been advising a number of senior Republican senators on proposals to update and clarify the Electoral Count Act, an effort that comes not a moment too soon.

Passed 10 years after Hayes-Tilden, the Electoral Count Act established a formal counting procedure. But the law is so vaguely worded that Trump adviser John Eastman apparently thought Pence could use it to invalidate Biden’s victory.

“While the Republicans are transfixed by their own political predicaments, and the Democrats by theirs,” Luttig wrote in a New York Times op-ed in February, “the right course is for both parties to set aside partisan interests and reform the Electoral Count Act, which ought not to be a partisan undertaking.”

Right. The long-term credibility of our elections is at stake. Candidates sympathetic to Trump’s “Stop the Steal” movement are running for secretary of state and other election-related offices at the local level across the country, perhaps coming soon to a vote-counting office near you.

Are they setting up more fights for the future? The very future of our democracy hangs in the balance. It is not enough for Congress and the rest of us to hold Trump, among others, accountable for the last election. We need to protect future elections too.