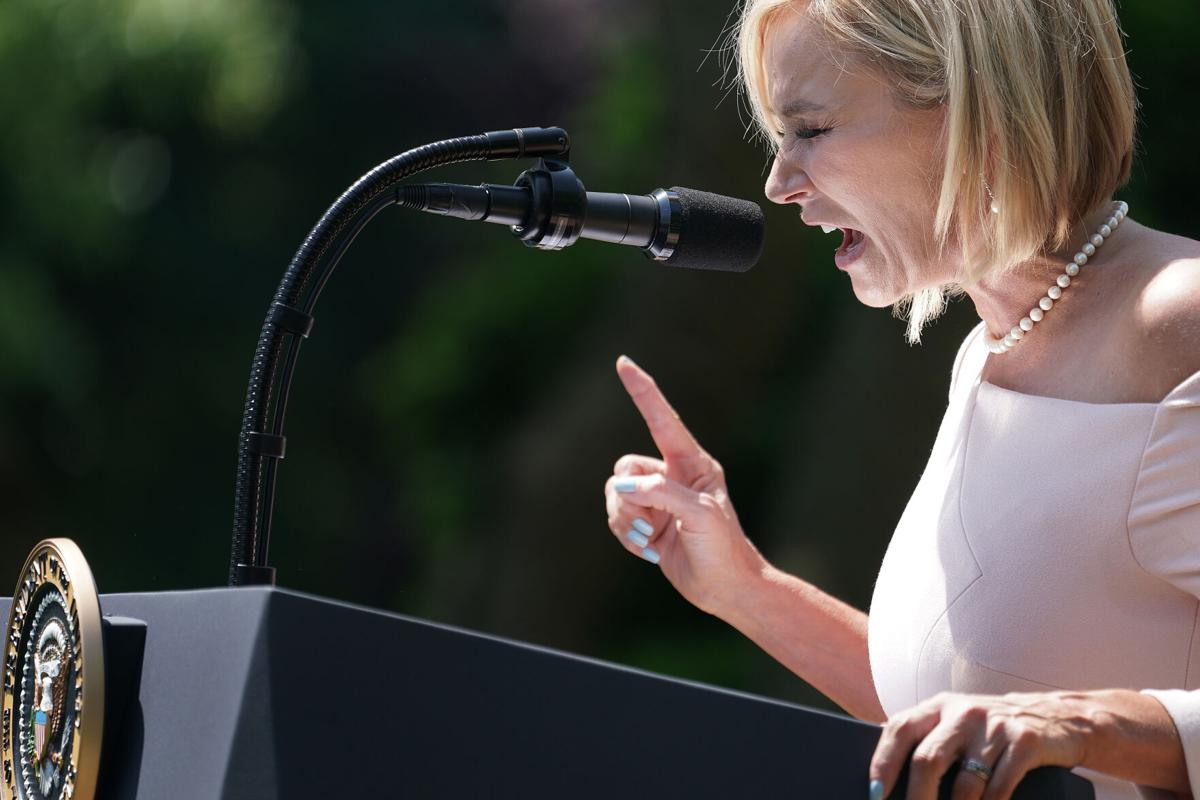 Evangelist Paula White, chair of the White House evangelical advisory board, says a prayer for President Donald Trump during a National Day of Prayer service May 2, 2019, in the Rose Garden at the White House.

Pollsters who keep track of such matters report that the numbers of religiously unaffiliated — describing their religious identity as atheist, agnostic or “nothing in particular” — now stands at 26%, up from 17% in 2009, according to Pew Research.

Some call it the “rise of the nones,” short for nonbelievers. But that doesn’t mean they have abandoned all trappings of religion. Americans don’t limit their religions to the most holy. Sometimes their devotion is bound tightly with their politics.

That thought came to mind as I mused about John McWhorter’s latest book, which bears the timely title “Woke Racism: How a New Religion Has Betrayed Black America.”

A Columbia University linguist and intellectual provocateur, particularly in his analyses of race relations, McWhorter is popularly known — some would say infamously — for giving voice to the self-made voiceless. He says many would like to say or raise questions in our world of fickle language etiquette, but hesitate to speak up for fear of inviting a punch in the nose.”

I winced at first when I saw in his title yet another setback for my struggling campaign to erase the word “woke” from today’s social and political discourse. But McWhorter, in his own provocative way, actually joins that fight from another angle.

He argues that certain strains of today’s anti-racism movement and its advocates have effectively turned the cause into a form of religion, demanding strict obedience and unfortunately muzzling such niceties as nuance and debate.

His aim, as he puts it, is to explain “why something so destructive and incoherent is so attractive to so many good people” and “why so many Black people are attracted to a religion that treats us as simpletons.”

Appropriately, McWhorter forgoes current woke fashion by spelling “Black” with the traditional lowercase “b.” That debate also goes on.

But, one asks, has the cultural left, along with some major institutions and companies, gone too far in embracing anti-racist ideas?

I have to say yes. Pundits and others have found ample fodder in commentary about unfair presumptions of “white privilege” and “Black victimhood” that don’t always stand up under closer examination.

I still bristle, for example, over a white Chicago law professor who had to face a disciplinary process last year for quoting the N-word in class, reading it from the text of a court case.

Or the San Francisco school board’s decision to remove the name of Abraham Lincoln, among other historical figures, from public schools because of his questionable policies toward Native Americans, a move that one parent quite correctly said sounded “almost like a parody of leftist activism.” Sorry, it’s real.

But if wokeness has taken on religious overtones in the passions of some believers in the superheated atmosphere following the murder of George Floyd, so has its opposite, commonly known as Trumpism.

This often occurred to me as I was trolled by some of my more colorfully conservative readers during Barack Obama’s rise, especially with messages referring to him as “your Savior.”

But with Donald Trump’s surprising rise to the White House, I was surprised and impressed by the same level of boisterous devotion, only by a different subset of Americans.

I have since been further impressed by Trump’s success in energizing multitudes of conservatives to take over the Republican Party, particularly with the help of white evangelical Christians, among whom his approvals soared above 80%.

Those numbers appear to have held up so remarkably well, even after some of his devotees attacked the Capitol on Jan. 6, that almost no Republicans expect to have a chance to win primaries without his blessing.

Those who try do so at the risk of banishment as “RINOs,” or Republicans in Name Only, as does anyone who fails to show complete devotion to his dominance.

One can only take such comparisons so far, of course. Religion is a system of belief and worship of a superhuman controlling power, dictionaries say, especially a personal God or gods and grounded in faith as much or more than logic.

That’s why I like to keep my politics and religion as separate as possible. My religion tells me that God is infallible. Politics has yet to produce anyone who deserves that level of devotion, and I don’t expect that it ever will.

No, there is absolutely nothing funny about the horrors that abruptly ended Waukesha, Wisconsin’s Christmas parade. But Mary Lemanski gave it …

Clarence Page: ‘Wokespeak’ is changing faster than I can keep up

Last summer’s protests and “racial reckoning” for social justice have given rise to a new vocabulary of racial, ethnic and gender awareness and activism.

Evangelist Paula White, chair of the White House evangelical advisory board, says a prayer for President Donald Trump during a National Day of Prayer service May 2, 2019, in the Rose Garden at the White House.