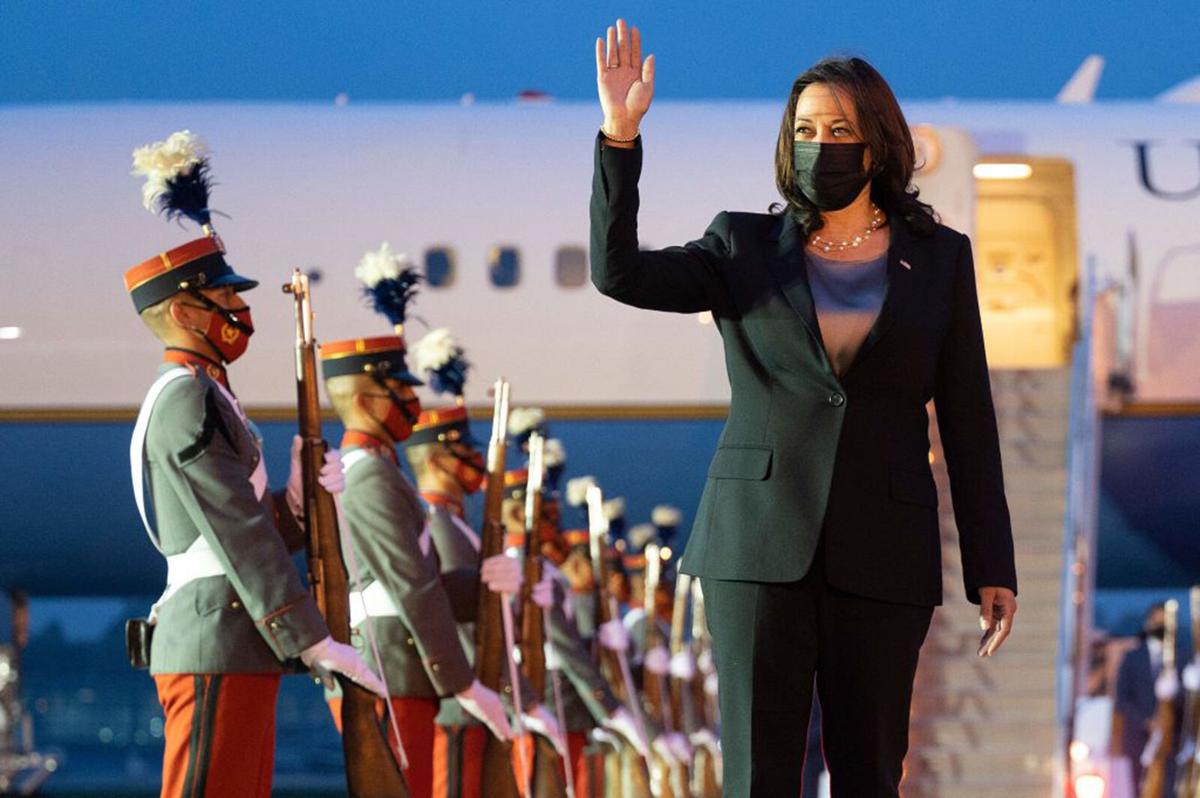 US Vice President Kamala Harris waves upon arrival at the Aeropuerto Internacional La Aurora in Guatemala City on June 6.

Rep. Alexandria Ocasio-Cortez actually was being kind when she described Vice President Kamala Harris’ “Do not come” message to undocumented Central American migrants as “disappointing.” “Embarrassing” would have been closer to the point.

On her first foreign trip as vice president, at a news conference with Guatemalan President Alejandro Giammattei, Harris spoke about

such “root causes” as crime, poverty and corruption that drive the recent tide of disparate migrants from the “Northern Triangle” of Guatemala, Honduras and El Salvador in Central America.

On behalf of the administration, the former California senator offered new economic aid and programs to partner with government and civil society to investigate corruption and human trafficking and a future in which Guatemalans and others can find “hope at home.”

But that was overshadowed in the news coverage and public conversations by her blunt and, in tone, callous declaration that, “I want to be clear to folks in the region who are thinking about making that dangerous trek to the United States-Mexico border. Do not come. Do not come.”

She arrived as a bridge-builder but turned into a traffic cop, rolling up the national welcome mat without even bothering with an exclusion for those seeking legal asylum from horrendous violence. That was too much for Ocasio-Cortez, who tweeted that Harris’ comments were “disappointing to see.”

Not surprisingly, the Bronx-based voice of the Democrats’ left-progressive wing compared Harris’ position with blaming the victims.

“First, seeking asylum at any US border is a 100% legal method of arrival,” she tweeted. “Second, the US spent decades contributing to regime change and destabilization in Latin America. We can’t help set someone’s house on fire and then blame them for fleeing.”

And in terms of tone, Harris made bad matters worse in the way she tried to deflect questions from NBC’s Lester Holt about why she was not including a visit to the U.S.-Mexico border in her trip.

The question was predictable, since visiting the border had become a litmus test among conservatives and daily fare in right-wing media. Yet Harris responded with a tone of annoyed surprise.

“And I haven’t been to Europe,” she said.

“And I mean, I don’t understand the point that you’re making,” she said, trying to recover. “I’m not discounting the importance of the border.”

Sure, visiting the border, one of former President Donald Trump’s signature issues in 2016 as if it were a divine rite of passage, is more of a symbolic gesture than substantive policy change. But in politics, performance matters. Harris should at least have been better prepared for the question, instead of adding fuel to her appearance of being poorly briefed.

Let’s be candid. I’m a lot closer to Harris’ and President Joe Biden’s positions than I am to former President Donald Trump on immigration and almost every other issue.

But that only makes me all the more frustrated when I see the current veep display the same tone deafness that too often has caused other rising Democrats to lose touch with what’s really troubling the mostly white working-class and middle-class GOP base that used to be a lot more receptive to Democrats.

Immigration has become a defining issue for both parties in much the same way that the two parties differ on other issues, such as domestic crime and poverty. The right prioritizes law and order while the left emphasizes root causes.

In fact, both challenges need to be met. But in today’s hyperpolarized political atmosphere, seldom do solutions come together to jointly confront the problems.

Instead, our government is so deeply divided that a flip of party control in Washington — beginning perhaps with next year’s midterm elections — could bring a reversal

on Biden’s efforts to bring a more humane policy than what Trump left behind.

Vice President Harris should be sufficiently chastened by her experience on the road to do better next time she’s in the spotlight. Much still needs to be done in improving border security and our rechanneling of aid to Central America through nonprofits and nongovernmental organizations, instead of corrupt regimes.

But to make that sale, Harris and the rest of Team Biden need to come up with more clear and succinct assurances to dispel the partisan fearmongering that only further divides us.

Clarence Page: Police suicides remind us that our folks in blue get the blues, too — to a deadly degree

Reports of the recent death of a Chicago police officer from a self-inflicted gunshot reminded me of a sadly startling statistic: Police in re…

Bill Cosby and Chicago Mayor Lori Lightfoot may not know each other but both have been giving genuine racial victimization a bad name.

Clarence Page: Southern Baptists face turmoil over critical race theory, whatever it is

Clarence Page: Pot, politics, protests — yes, it must be time again for the Olympics

Clarence Page: Can Biden chill the spike in gun violence? He knows he must try

Let’s start with a guessing game:

US Vice President Kamala Harris waves upon arrival at the Aeropuerto Internacional La Aurora in Guatemala City on June 6.