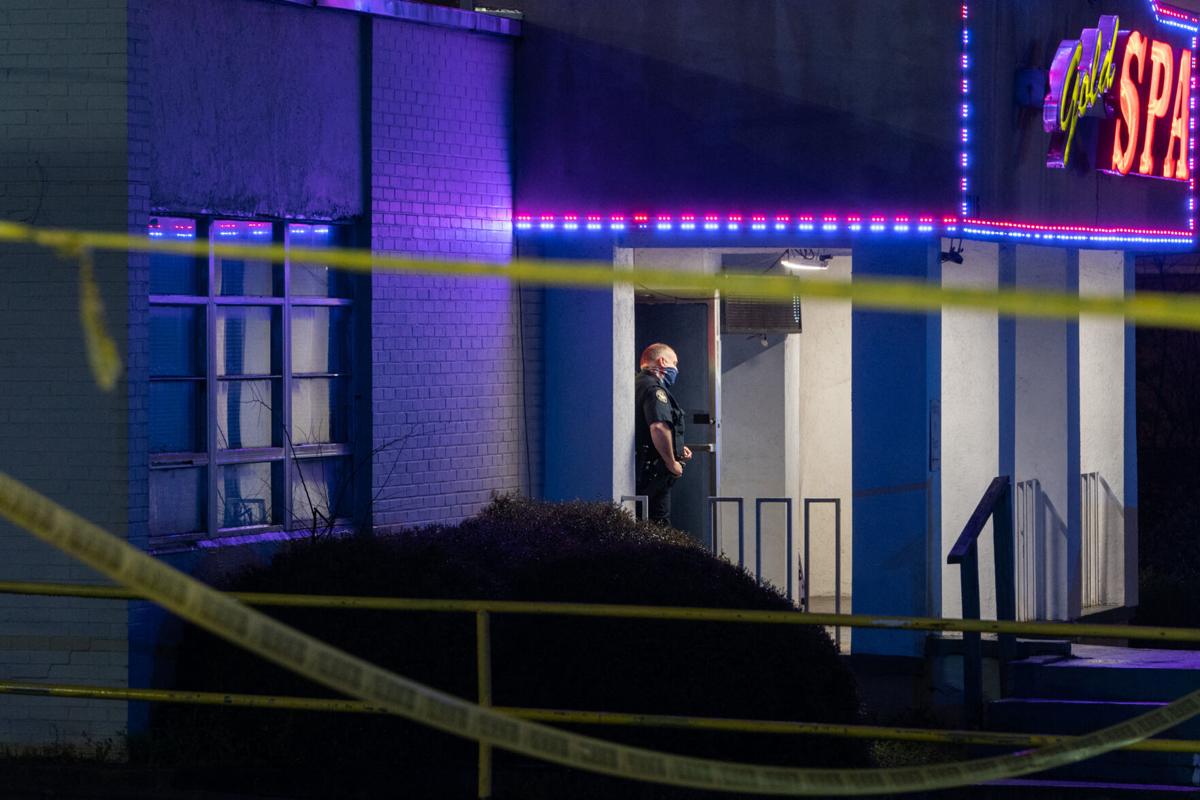 A police officer stands outside a massage parlor where three people were shot and killed on March 16 in Atlanta, Georgia. Eight people were killed in shootings at three different spas in Georgia that day, police and local media reported. The suspect, named as 21-year-old Robert Aaron Long, is in police custody.

When I first wrote about a national surge in reported hate crimes against Asian Americans since the coronavirus pandemic began, it was easy for the rest of us to sympathize, yet also believe, however feebly, the problem was not about us.

A month later, the shooting deaths of eight people, including six women of Asian descent, in three Atlanta spas painfully spotlights how Asian Americans have been upset for good reason, even as the motive of the alleged shooter in the Atlanta-area attacks remained murky.

That murkiness has raised a necessary debate over what it should take for official “hate crime” charges to be warranted — and what we should make of this particular gunman’s explanation, which, as police described it, sounds deranged.

The suspect, Robert Aaron Long, 21, “was pretty much fed up” and “having a really bad day,” said Capt. Jay Baker, spokesman for the Cherokee County sheriff’s office, in an initial description that was widely and justifiably panned. “Having a bad day” might work as cop-shop chatter but not to reassure Asian American communities that too often have experienced communication problems with police.

Baker later was replaced as a spokesman for the investigation as journalists discovered a Facebook post, since deleted from his page, with photos of a T-shirt describing COVID-19 as an “IMPORTED VIRUS FROM CHY-NA” in apparent reference to former President Donald Trump’s “China virus” and “Kung Flu” rants that many, including me, blame for hate crime incidents, verbal and otherwise.

While overall rates of hate crimes decreased by 7% after the nation went into the COVID-19 shutdown in 2020, anti-Asian hate crimes surged by 149%, according to the Center for the Study of Hate and Extremism at California State University at San Bernardino. Nearly 3,800 anti-Asian hate incidents were reported between March 19, 2020, and Feb. 28, 2021, the center found.

“Verbal harassment” accounted for 68.1% of the reported incidents, according to the Stop AAPI Hate reporting center that was launched in March 2020 to track attacks against Asian Americans and Pacific Islanders. Physical assault amounted to 11.1%.

But we need to know more. Too many relevant episodes go unreported, partly because of little faith anything will be done about them and partly because of the often politicized disputes over what constitutes a “hate crime.”

After all, as some critics point out with varying degrees of sarcasm, aren’t all violent crimes motivated by anything but love?

It’s hard to argue with that, especially regarding violence as clear-cut as the Atlanta-area massacre. But the hate crime designation was created to bring FBI investigations and enhanced penalties for bias-related crimes based on the victim’s race, color, religion, gender, sexual identity, disability or national origin.

But that usually means the perpetrator has to make some expression of bias, verbal or otherwise, to reveal their biased motivations. One thing the FBI presumably must investigate is whether Long’s allegedly confessed “sexual addiction” would be enough to justify the “hate crime” designation.

While acknowledging victims of race-based violence deserve justice, for example, Rep. Chip Roy, a Texas Republican, hit a sour note by adding he was concerned about “thought police” stifling free speech. Then he followed that with a jocular reference to lynching (a “rope” and a “tall oak tree”).

Among those taking umbrage, Rep. Grace Meng, a New York Democrat and first vice chair of the Congressional Asian Pacific American Caucus, later complained Republicans had helped incite violence against Asian Americans by using language like the “China virus” to describe the coronavirus.

“This hearing was to address the hurt and pain of our community, to find solutions, and we will not let you take our voice away from us,” she said.

Yes, every voice must be heard. We all need to listen too.

Clarence Page: Is there room for redemption in 'cancel culture'?

I am hardly a core member of Teen Vogue magazine’s demographic. But I began to pay attention to the lively Conde Nast publication back in 2016…

A police officer stands outside a massage parlor where three people were shot and killed on March 16 in Atlanta, Georgia. Eight people were killed in shootings at three different spas in Georgia that day, police and local media reported. The suspect, named as 21-year-old Robert Aaron Long, is in police custody.