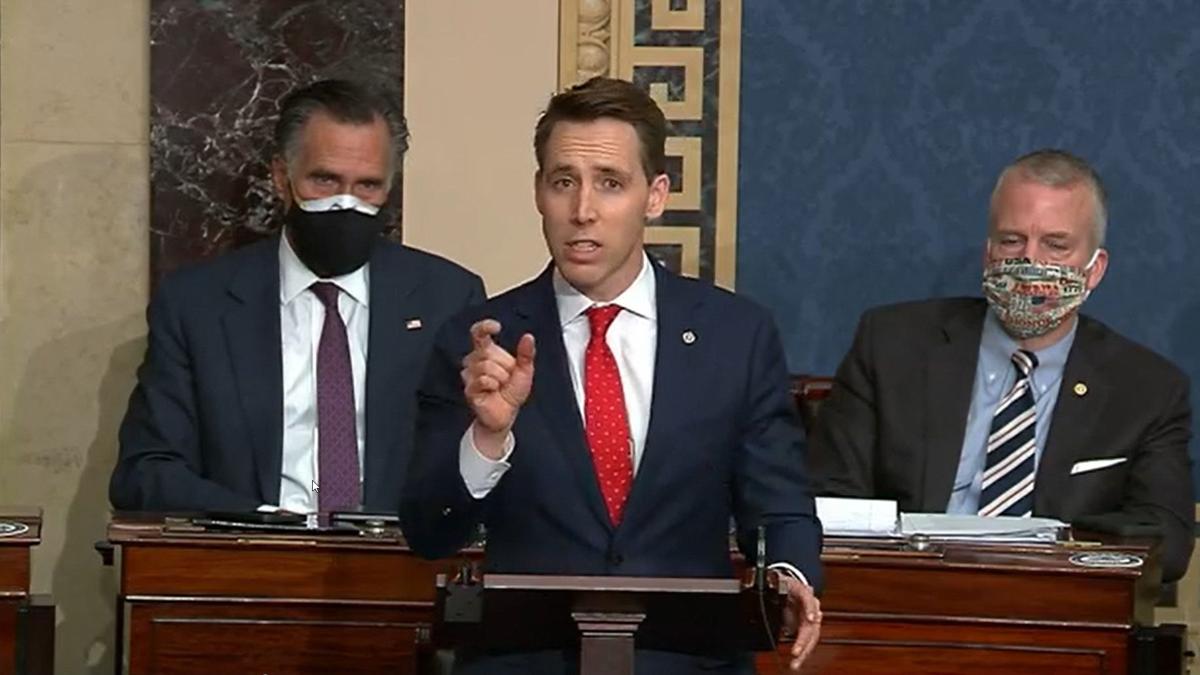 In this screenshot taken from a congress.gov webcast, Sen. Josh Hawley, R-Mo., speaks during a Senate debate session to ratify the 2020 presidential election at the U.S. Capitol on Jan. 6, 2021, in Washington, D.C. (congress.gov/Getty Images/TNS)

What is it going to take?

For years, that question has weighed upon the rest of us — and even some of its own members — as we watched the Republican Party slide ever deeper into a morass of political extremism, screwball conspiracies, alternate facts and ambient rage incompatible with responsible governance.

What’s it going to take to shock this party back to itself?

Mind you, we’ve learned a great deal about what will not do it. Public censure won’t. Logic won’t. Appeals to decency won’t. Nor will appeals to patriotism, duty and tradition. Nor will reminders that history is watching.

But there was a last hope one always held in reserve: that, when rubber met road and nitty met gritty, Republicans finally would return to some semblance of sanity because they’d have no other choice.

But in the last three weeks, that hope has been smashed like, well, a window of the U.S. Capitol. It turns out that neither a violent physical attack on the government itself nor a direct threat to their very own lives and limbs is enough to get a groundswell of Republican lawmakers to do the right thing.

For a while, it looked as if it might be. For a while, in the backwash of shock and anger from the Jan. 6 attack, it looked as if they might join with Democrats to impeach and convict the 45th president, thereby assuring he can never hold office again. One dared to hope his party might at last impose accountability upon the man who exhorted the mob to violence.

Then the quislings quailed.

House Minority Leader Kevin McCarthy, who had said flatly the president bore responsibility for the riot, said Sunday on “Full Court Press with Greta Van Susteren” that “everybody across this country bears some responsibility” — an epigram of gutless moral equivalence that insults most Americans, particularly those of us who have been warning about something like this for years.

Other Republicans pretend to see nothing out of sorts here, nothing that demands sanction.

Unless it be those few members of their party — Rep. Liz Cheney, one of 10 House Republicans who voted for impeachment, comes to mind — who were courageous enough to do what is so glaringly right.

Otherwise, Republicans suddenly are more concerned with preaching “unity,” a word most could not spell on Jan. 5. As House members delivered their Article of Impeachment to the Senate on Monday, it was considered unlikely a sufficient number of Republican senators will vote to convict the former president.

Sadly, even though the bad man has left town and can’t hurt them anymore, they still can’t bring themselves to stand up on their hind legs and say that what he did is wrong.

After all, there are all those future elections to think about ... It is said the ex-president is thinking of forming a new, MAGA-centric political party. In some ways, it’s an attractive idea.

Democracy requires at least two functioning political parties. America has been making do with one and a cult.

A MAGA party would be the political equivalent of giving the GOP an exorcism. But it also would give extremism a permanent, prominent seat at the table.

Can the GOP be saved otherwise? Truth is, the rest of us have no say.

If the party is to be saved, the party will have to do it. And while we can’t know all that that will take, we do know it will take courage.

Unfortunately, the present standoff makes one thing all too clear.

Courage is a commodity the GOP has in short supply.

Leonard Pitts Jr. is a columnist for the Miami Herald, 3511 NW 91st Ave., Miami, Fla., 33172. Readers may contact him via email at lpitts@miamiherald.com.

Leonard Pitts Jr.: Black history is America's history. It will not be erased -- no matter how hard America tries

Leonard Pitts Jr.: Listen to Y before it's too late

You’re not reading this on a smartphone or tablet, are you?

Leonard Pitts Jr.: Black history is America's history. It will not be erased -- no matter how hard America tries

Leonard Pitts Jr.: 'I do not believe unity is possible'

Leonard Pitts Jr.: This is not a feel-good story

This is not a feel-good story.

Leonard Pitts Jr.: For African Americans, faith is not confined to the hope of heaven

George Zimmerman was acquitted in the killing of Trayvon Martin on a Saturday night in 2013.

Apparently, Adam Kinzinger’s family hates him now. Alexander Hamilton would not be surprised.

Leonard Pitts Jr.: It is different, being us

An open letter to African-American people:

In this screenshot taken from a congress.gov webcast, Sen. Josh Hawley, R-Mo., speaks during a Senate debate session to ratify the 2020 presidential election at the U.S. Capitol on Jan. 6, 2021, in Washington, D.C. (congress.gov/Getty Images/TNS)