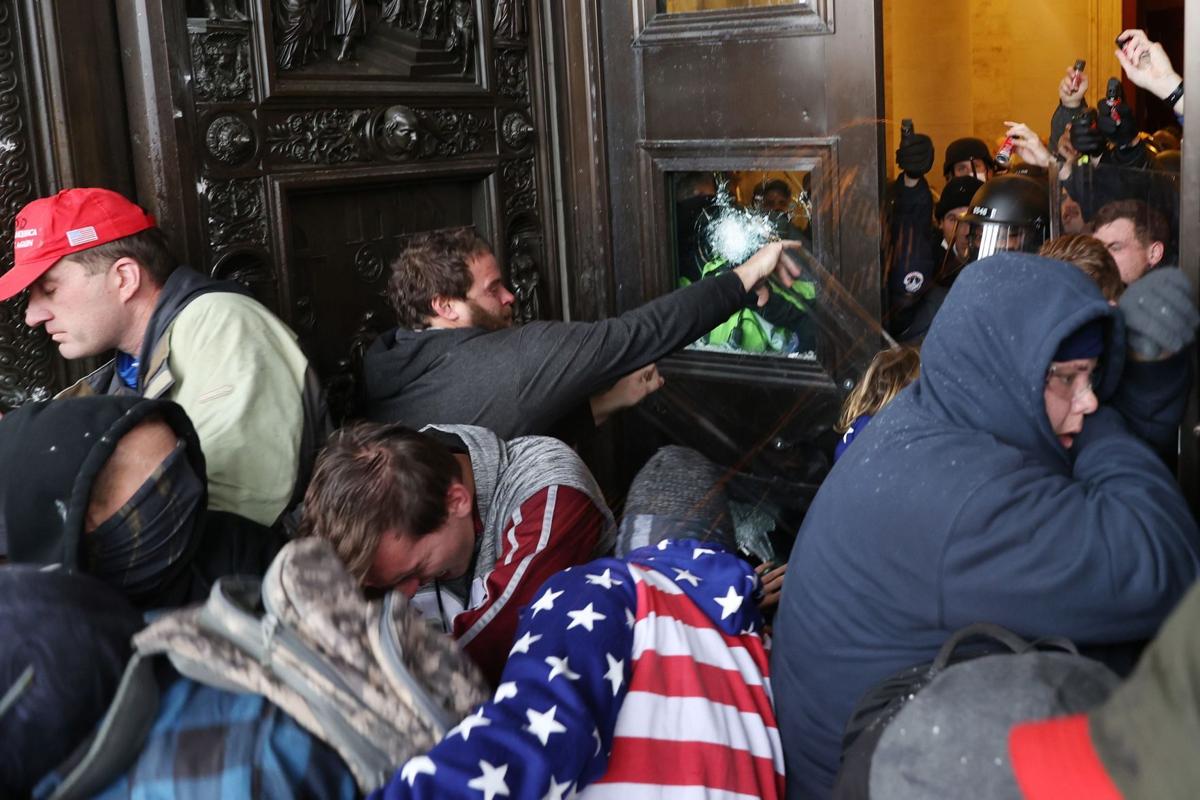 A pro-Trump mob at the door of the U.S. Capitol Building on Wednesday in Washington, D.C. during a riot.

No, it wasn’t any of the boogeymen white conservatives have imagined, exaggerated and bloviated into national threats. Rather, it was a mob of white conservatives themselves, unrestrained by law, unfettered by patriotism, fueled by resentments, racial and otherwise, who stormed the very Capitol Building of the United States. Who broke its windows and fought with police. Who forced representatives and senators to shelter in place. Who brought Congress to a halt.

All of it egged on by Donald Trump, the pathetic excuse for a president with which this country has been saddled for four years that feel like 40. He told them the election he lost in November was “rigged.” He invited them to turn a procedural formality — the certification of electoral votes — into the last stand at the Alamo. He encouraged this chaos, called for it. And it came.

It is perhaps fitting that CNN cut to images of the violence shortly after Sen. Ted Cruz gave a speech calling on Congress to look into Trump’s baseless allegations, allegations that have already been investigated and rejected by a battalion of courts, journalists and public officials. Cruz’s “reasoning” was that the rest of us should be more solicitous of those who, notwithstanding all that debunking, still believe the election was stolen.

Meantime those same charming people were storming the barricades. If the hypocrisy of white conservatism were any more naked, it would be skeletal.

They acted like racial-justice uprisings across the country were an attack on the Union. Then they committed this act of treason unparalleled in American history.

They called Colin Kaepernick unpatriotic because he knelt during the National Anthem. Then they took Confederate battle flags into the Capitol.

They decried the burning of a Target store in Minneapolis during the George Floyd protests. Then they came to Washington and burned democracy itself.

So much for the peaceful transition of power. And if we are not very careful in this moment: so much for America. No, scratch “careful:” If we are not purposeful and intentional about requiring liberty and justice for all, if we do not stop minimizing, rationalizing and mollycoddling white extremism, this country cannot survive.

Can you imagine a scenario where an African-American mob storms the Capitol and the lawn is not littered with bodies and blood? That happens to Black people when they ask for equal justice, much less if they tried to overthrow the government. Yet this mostly white mob had the run of the building. What a shameful and wretched spectacle. What an embarrassment.

What’s frustrating is that this was foreseeable — and foreseen, both by this observer and others. Unfortunately, we have gotten into this habit of acting as if gravity has been repealed, as if the things we do — the shortcuts of expedience, the abridgments of custom, the embrace of lies, the compromises of fundamental principle — are without weight, without consequence.

But everything leads to something else. You cannot keep breaking the rules, cannot accept incoherence as reason, cannot abandon fact, cannot abdicate a statesman’s duties, cannot — it bears repeating — mollycoddle white extremism, without paying a price. That’s the story of Wednesday’s chaos.

The bill came due.

Leonard Pitts Jr. is a columnist for the Miami Herald. Readers may contact him via e-mail at lpitts@miamiherald.com.

To the Republican Party:

And so we reach the end of an unpresidented era.

Leonard Pitts Jr.: So what now?

I don’t mind admitting that I could really go for a race against time to foil a terrorist plot.

A pro-Trump mob at the door of the U.S. Capitol Building on Wednesday in Washington, D.C. during a riot.