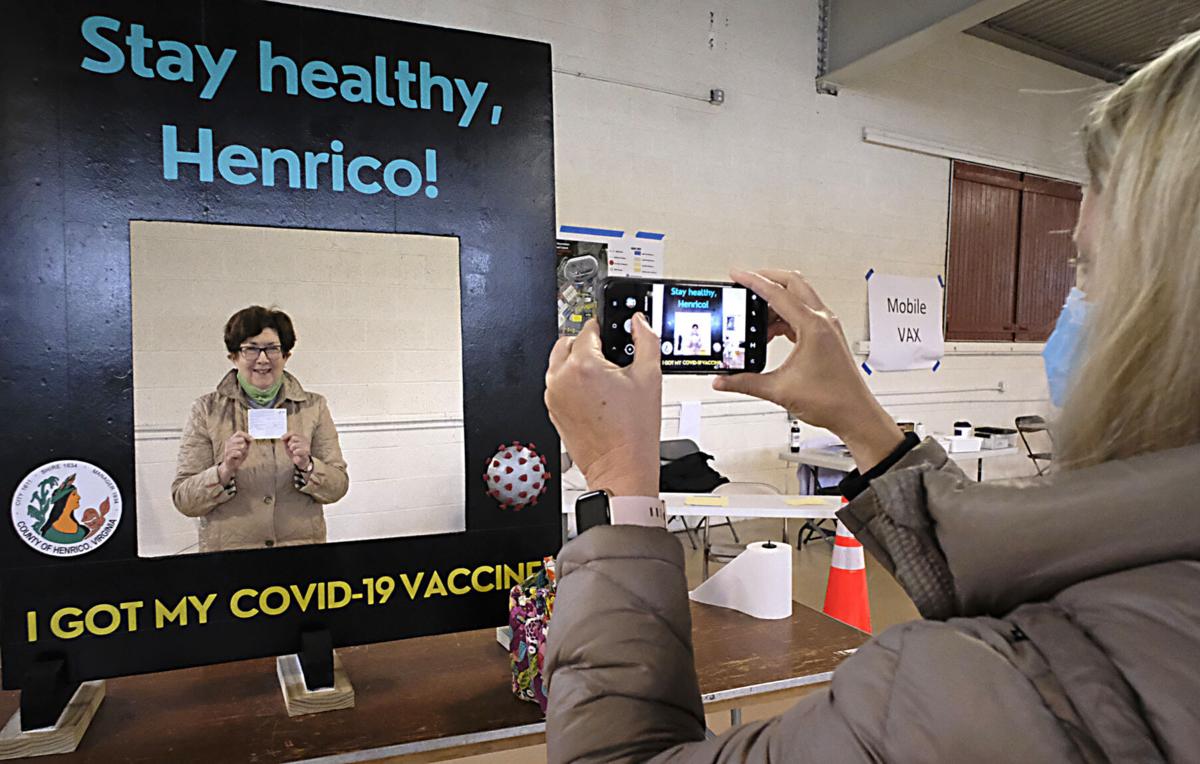 Carolyn Buckner (left) had her photo taken by Virginia Carlson after they both received a Johnson & Johnson vaccination at Richmond Raceway on Thursday.

An official looks over people who were resting after receiving their COVID-19 vaccines at St. James Baptist Church in Henrico County.

That news puts to rest one worst-case scenario: that vaccines might protect the vaccinated against hospitalization, but allow millions of silent infections to continue circulating.

The new data were collected from 4,000 health care workers, first responders, delivery workers and teachers who were vaccinated with the Pfizer or Moderna vaccines between December 2020 and March 2021.

The participants were asked not only to monitor symptoms but also to test themselves weekly. The study authors concluded the vaccines caused a 90% reduction in all infections. If people aren’t getting infected, they can’t transmit the virus to others.

The next drop on the roller coaster could come from new virus variants, some of which have shown ability to evade antibodies generated by the original strain.

But experts such as Paul Offit of the Children’s Hospital of Philadelphia are more optimistic.

Even before the new study came out, Offit saw enough other evidence of decreased transmission from vaccines that he said he liked the idea of issuing vaccine passports for travel, restaurants or other venues.

Data from Israel, where most of the population already is vaccinated, show rapidly dropping deaths and hospitalizations. “Nothing is foolproof,” he says, but people will be much safer mixing with others who are vaccinated than those who are not.

The new study results also should allay fears that the vaccines’ astounding clinical trial results wouldn’t hold up in the real world.

One concern was a small sample size. While there were thousands of people enrolled in those trials, infections relatively were uncommon so only a small number of people became infected either in the vaccine arm or in the placebo group.

In this new study, there were 161 infections in the control group of 994 unvaccinated people. By contrast, among the 2,479 vaccinated participants, only eight became infected between their first and second doses, which are given three or four weeks apart. Only three people were infected after they fully were vaccinated (two weeks after receiving the second shot).

One reason Offit said he was so optimistic was the vaccines induce not just antibodies, but so-called cellular immunity. That is, they stimulate production of specialized virus-fighting cells called T-cells, which can work against a broader range of variants than antibodies. The T-cells also last longer than antibodies and are what give vaccines the power to “remember” and fight a pathogen weeks or even months later.

He also was enthusiastic about the Johnson & Johnson vaccine, though it only was used in five people in the CDC study. That vaccine induces cellular immunity after just one shot, he says, while the Pfizer and Moderna vaccines induce T-cells only after two shots. For that reason, he does not advise skipping the second shot of the two-shot vaccines in order to conserve supply.

Monica Gandhi, an infectious disease doctor at the University of California, San Francisco said she thinks the shots will effectively end the pandemic because the T-cells can fight different variants.

“I do understand it almost seems too good to be true that the vaccines will get us out of this,” she says. “But they will.”

One thing we’ve learned is it’s hard to predict the course of this pandemic — given how hard it is to predict human behavior and the fast evolutionary path of the virus. Even the vaccine optimists such as Gandhi and Offit don’t see eradication of the virus in sight.

But they do see the possibility the virus could become less of a threat to life and health than seasonal flu, after which it will be hard to hold back a return to normal life — one with restaurants, international travel, and yes, roller coasters.

One thing we’ve learned is that it’s hard to predict the course of this pandemic — given how hard it is to predict human behavior and the fast evolutionary path of the virus.

Too often during this pandemic, the agency that’s supposed to help Virginians who have lost jobs through no fault of their own has instead added to their woes. COVID-19, with its devastating economic effects, has put the Virginia Employment Commission to the test. Repeatedly the VEC has failed that test, complicating the predicament of people who find themselves out of work. Many of those ...

Editorial: Rail deal will go a long way for Virginia

In December 2019, Gov. Ralph Northam was bullish about the need to improve Virginia’s rail system. The commonwealth introduced a $3.7 billion …

Editorial: A decision we still are paying the price for

Editorial: 60 years ago today, we crossed the threshold of space

Remembering cosmonaut Yuri Alekseyevich Gagarin's daring and historic feat on this date in 1961.

Editorial: What we can learn from Pete Giesen's career

Pete Giesen, who was from Radford, was the last of the “mountain-valley Republicans” who broke the stranglehold on power of segregationist Democrats in Virginia in the 1960s.

Editorial: Three more reasons for Virginia to use stimulus for school construction

Last week we proposed that Virginia use at least $3 billion of the $3.8 billion it’s getting as part of the latest federal stimulus spending bill for school construction.

A year ago on March 14, just days before the official start of spring, Virginia announced its first coronavirus-related death. A James City County man in his 70s died of respiratory failure as a result of COVID-19. Two days later, officials reported that the virus had claimed its second victim in the commonwealth.

In medicine, the rule (often incorrectly attributed to Hippocrates) is “first, do no harm.”

As we enter Year Two of the global coronavirus pandemic, researchers are finding another toll on American workers: burnout.

Carolyn Buckner (left) had her photo taken by Virginia Carlson after they both received a Johnson & Johnson vaccination at Richmond Raceway on Thursday.

An official looks over people who were resting after receiving their COVID-19 vaccines at St. James Baptist Church in Henrico County.