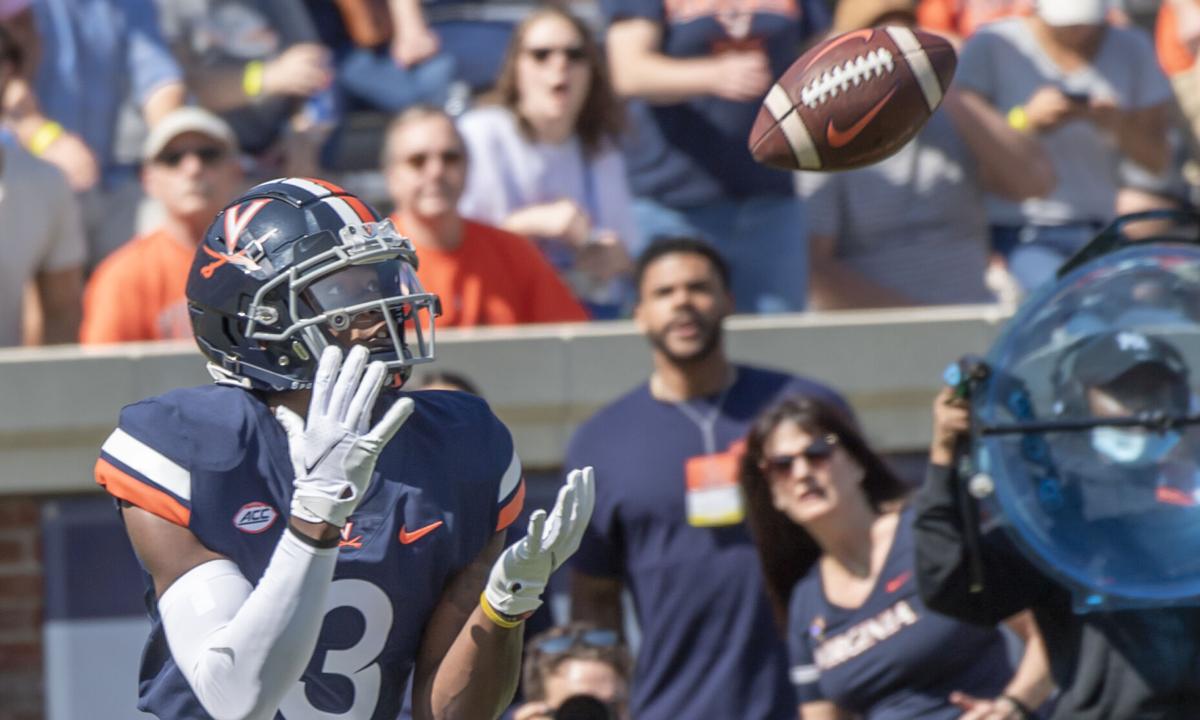 UVa wide receiver Dontayvion Wicks sets to catch a pass during a game Saturday against Illinois at Scott Stadium in Charlottesville. 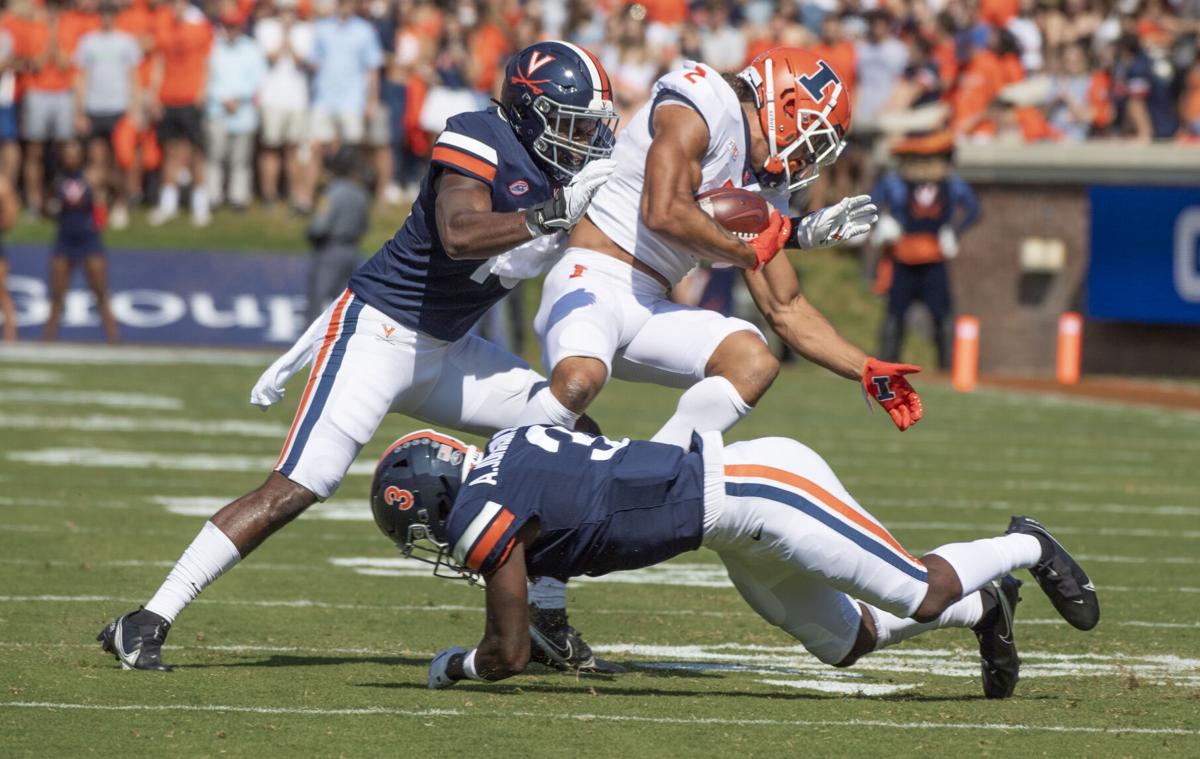 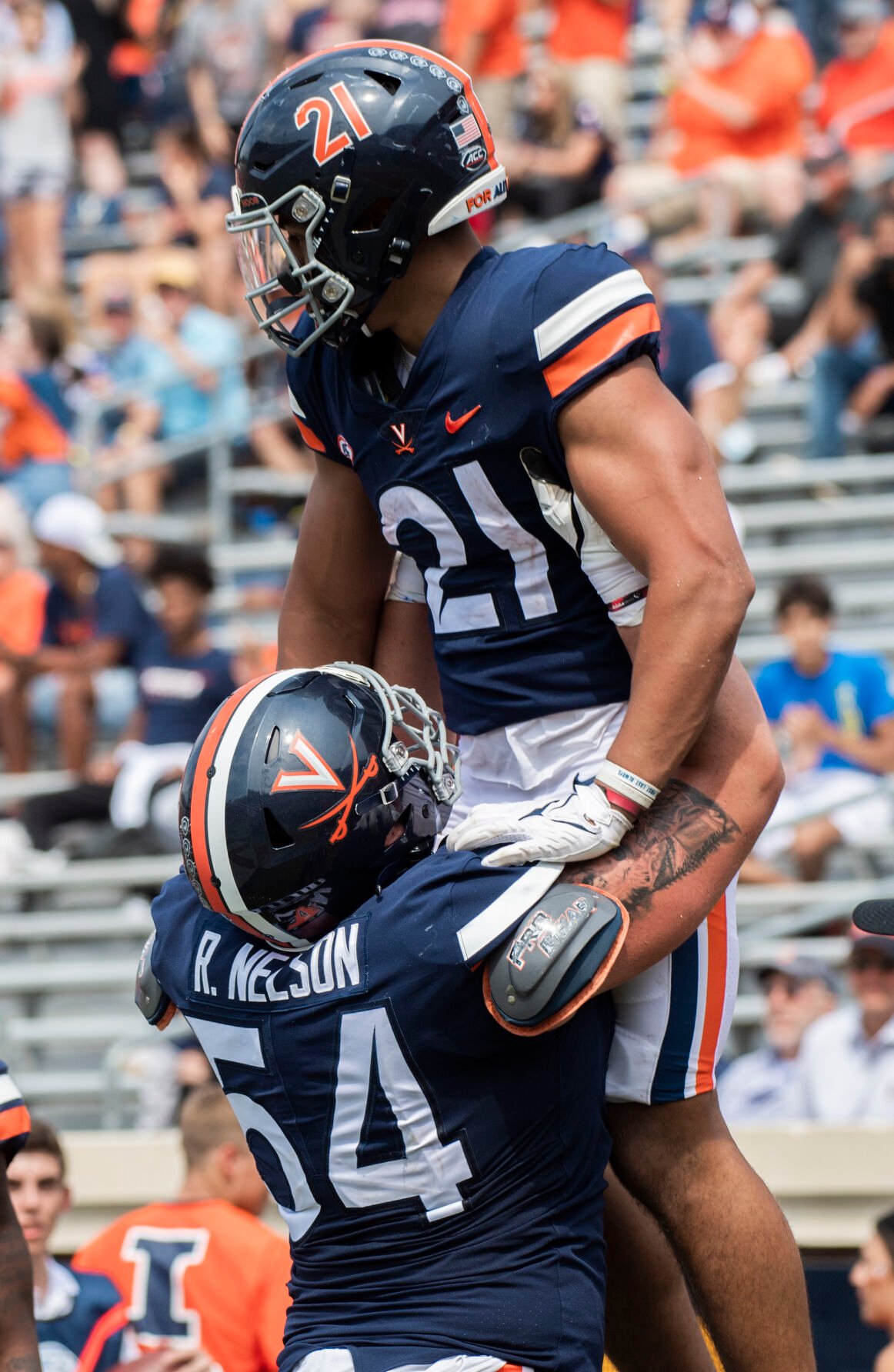 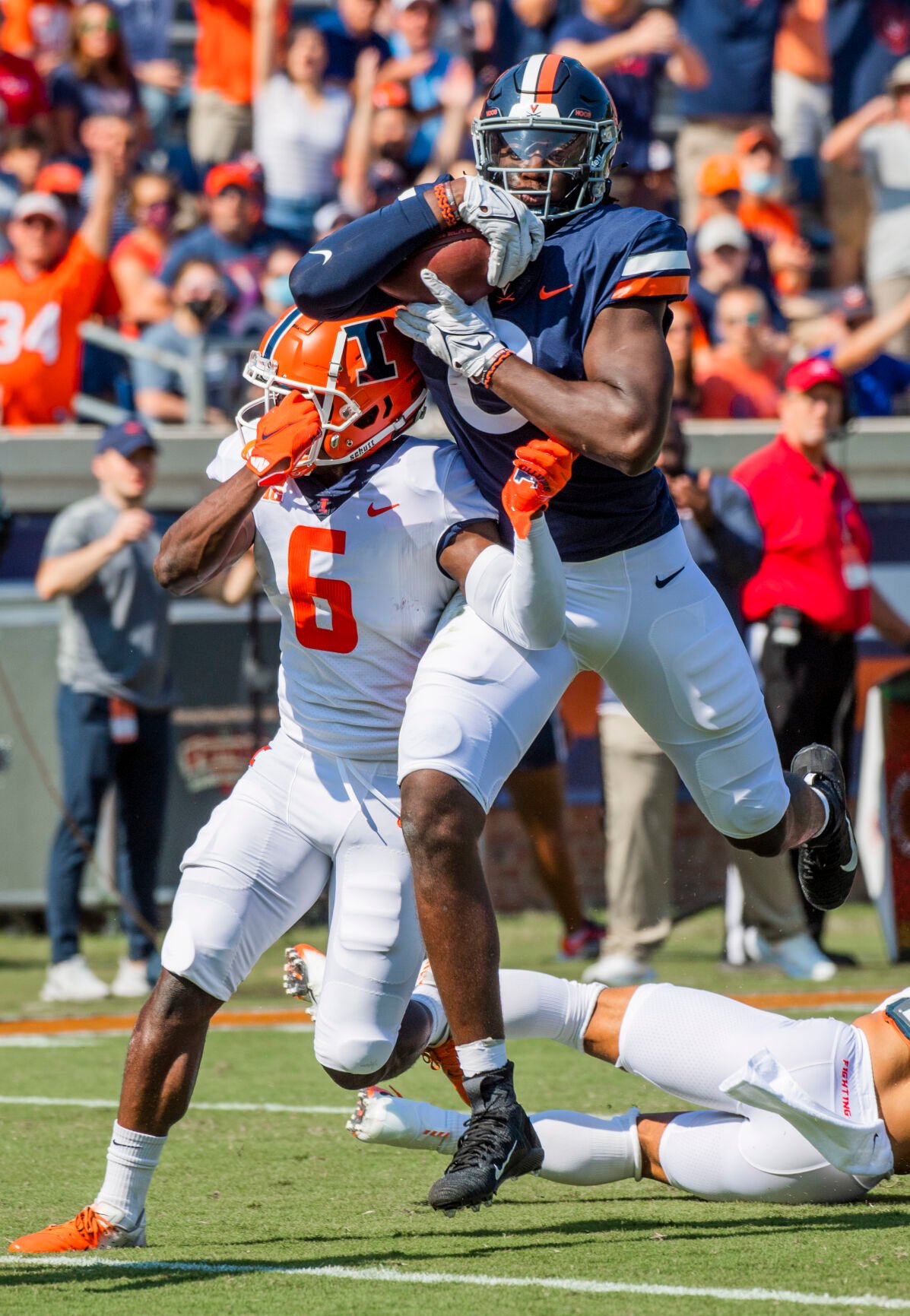 CHARLOTTESVILLE — Bronco Mendenhall was bullish about his offense during preseason camp, at one point matter-of-factly saying, “We’re gonna score a lot of points.”

Virginia took down Illinois 42-14, racking up 556 total yards in the process.

The first two drives set the tone for the contest, spotting Virginia (2-0) a two-touchdown lead in the first five minutes. Brennan Armstrong hit his receivers on the numbers, and the Illinois secondary struggled to keep UVa’s skill players in front of them.

“That was the whole objective of the game this week, to start fast, keep going fast, and don’t let up,” wide receiver Dontayvion Wicks said.

It took just four plays and 76 seconds for UVa to march 75 yards for a touchdown on the team’s opening drive. Tight end Jelani Woods accounted for 63 receiving yards, including a 32-yard touchdown catch.

Woods recorded just one catch in Week 1, his first game in a Virginia uniform. He caught five passes for 122 yards Saturday, and Mendenhall chose Woods to break the rock after the game.

“That was pretty much the best moment of my life right there,” Woods said.

On the next possession, UVa went 80 yards in four plays. Ra’Shaun Henry and Wicks both recorded chunk plays, with Wicks’ 28-yard catch ending in the end zone to put the Cavaliers up 14-0 with 10:04 left in the first quarter.

The Cavaliers stressed a fast start in practice all week, with Mendenhall designing practices in hopes of jumping out to an early lead against the Fighting Illini (1-2, 1-0 Big Ten).

“Our team responded because it was such a focus,” Mendenhall said. “When the team heard it over and over again and then saw it, there was an immediate confidence boost.”

The offensive showing wasn’t much better. Illinois didn’t record a first down until its fourth drive.

“I’m just trying to tell the guys, ‘Hey, don’t be satisfied, man, it’s time to keep pushing,’” Armstrong said. “We could’ve really knocked them out in that first quarter … it could’ve been 28-0 right off the rip. I feel like we’ve got to start getting that cutthroat mentality.”

Armstrong led one final touchdown drive before halftime, helping the Cavaliers march 62 yards in seven plays. He found Wicks for a six-yard touchdown to put his team up 21-7 at halftime.

Illinois opened the second half with an impressive four-play, 75-yard touchdown drive to pull within seven, but the Cavaliers quickly reinforced their dominance.

A pair of nine-play touchdown drives gave UVa a 35-14 lead late in the third quarter. The passing game was particularly effective on each drive, although Armstrong banged up his right leg on the first scoring drive of the quarter. He stayed in the game, playing with a brace on his right knee.

“I’m fine,” Armstrong said. “It got tweaked, braced it, taped it and we were fine.”

As the offense consistently churned out yardage, the defense stood tall. Illinois put together two touchdowns drives of 70-plus yards, but the Fighting Illini also had five three-and-outs.

“I think we’ve done a really good job,” Blount said. “I’m proud of our guys. The offense is hot, so why not three-and-out, get the ball back to them, and let them do their thing.”

Two fourth-quarter turnovers inside Illinois’ 30-yard line kept Virginia from closing in on 50 points. The Cavaliers left points on the field with missed field goals and turnovers, but the team also executed well for much of the contest and more than made up for errors.

Virginia added an exclamation point to the commanding win when Armstrong found running back Wayne Taulapapa for a e-yard touchdown pass. The score capped a 46-yard scoring drive aided by Illinois penalties.

"This leg will never be what it used to be", but Tiger is 'on the positive side'

"This leg will never be what it used to be", but Tiger is 'on the positive side'

Army takes advantage of short fields in win over Liberty

There are only two defensive linemen on Liberty’s roster who played in the early season matchup against Army in 2018. Ralfs Rusins and Jayod S…

Army’s inaugural visit to Williams Stadium was expected to be the first of many for the Black Knights. With Liberty and Army both playing as F…

Willis has not publicly announced whether he is entering the NFL Draft or returning for his final season of eligibility.

Darius McGhee scored a game-high 19 points, and Liberty held Maryland-Eastern Shore to 10 points over the final 12 minutes to win 73-61.

Virginia Tech uses big plays to take the lead and then holds on for the win win despite a late turnover.

The selections for all 41 bowls will be finalized four days from now during college football’s version of Selection Sunday. There have been so…

UVa wide receiver Dontayvion Wicks sets to catch a pass during a game Saturday against Illinois at Scott Stadium in Charlottesville.