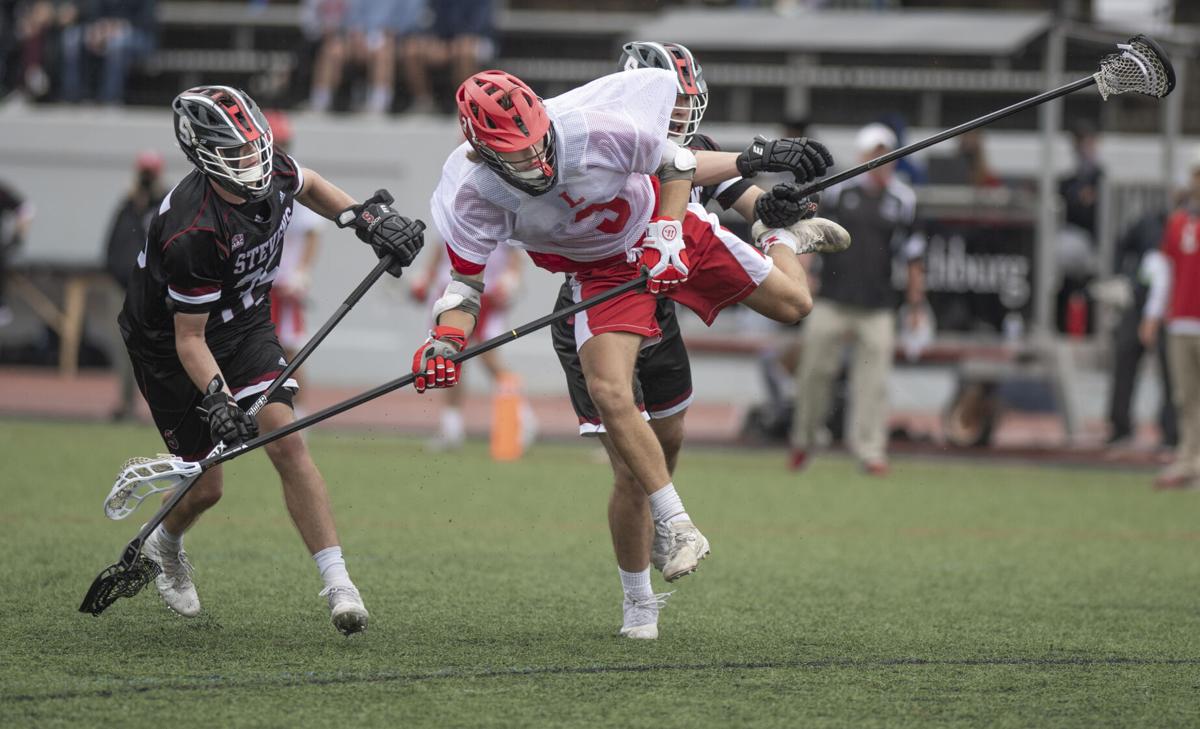 Lynchburg’s Chris Darminio follows through on his shot during a game against Stevens in the second round of the NCAA Tournament on May 16 at Shellenberger Field. 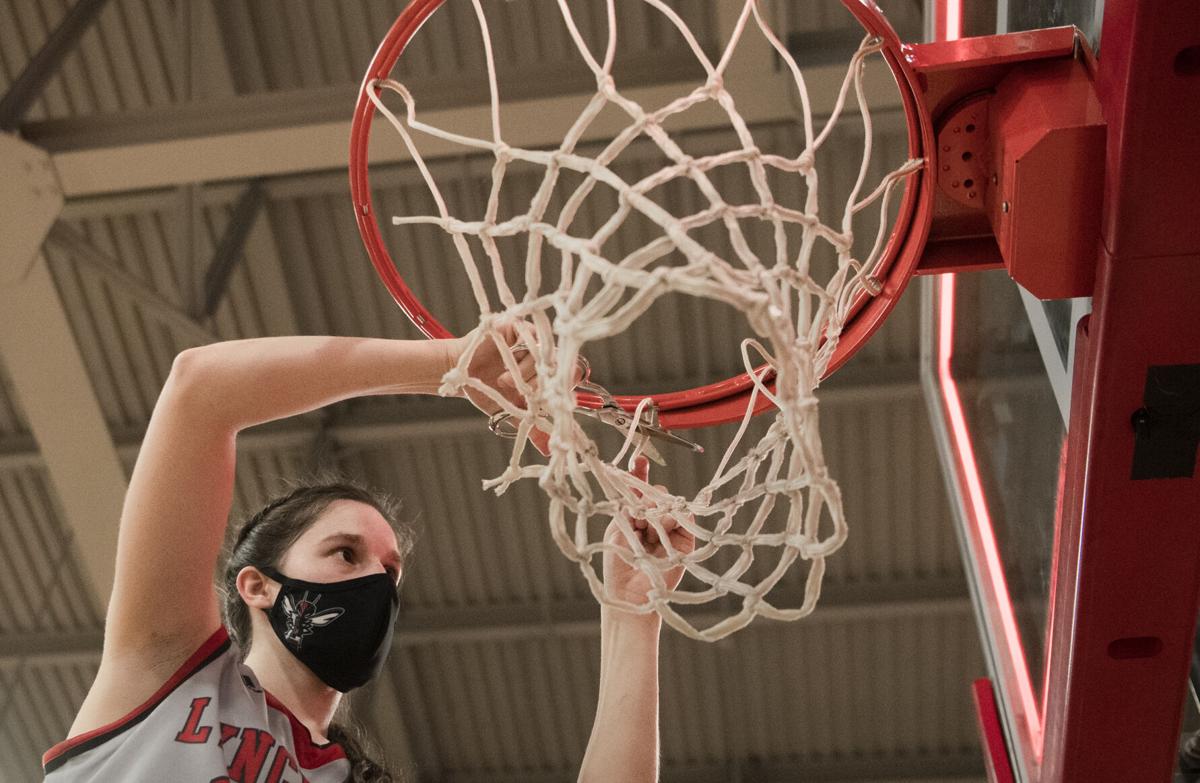 Lizzie Davis takes her turn cutting down the net after Lynchburg defeated Roanoke for the ODAC title. Davis was named the most outstanding player of the tournament. 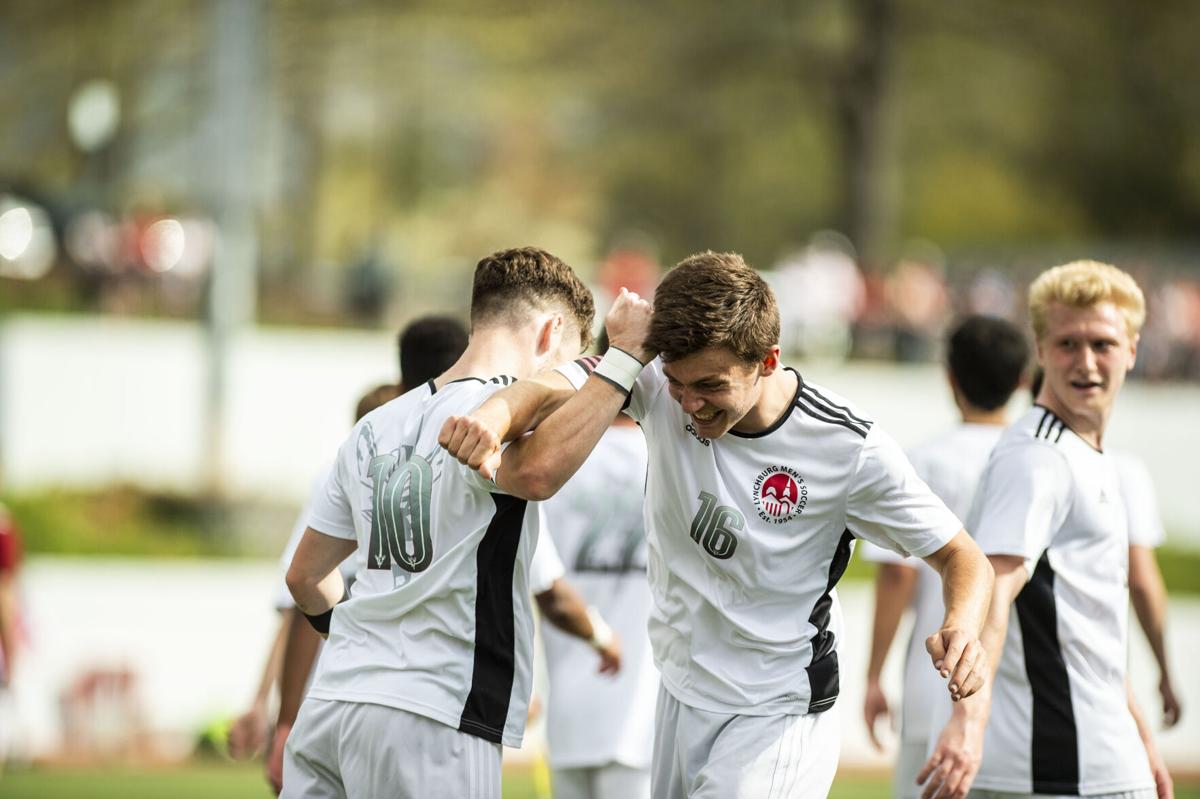 Lynchburg midfielder Ben Mackey (left) and defender Nick Foley celebrate with a personalized handshake after a goal during the ODAC soccer championship against Guilford on April 11 at Shellenberger Field.

Industries have shifted approaches to stay alive amid the pandemic. Individuals have drastically adjusted the ways they go about daily tasks. For many, the goal each day has been simple: survive.

The University of Lynchburg athletic department hasn’t been immune to the effects of COVID-19. The virus caused administrators, coaches and athletes to collectively embrace a flexible mindset for the 2020-21 school year.

But while changes abounded when it came to schedules and workouts, individual interactions, safety protocols and the goings-on of game days, the overall goal never changed for UL. The mission of those in charge of the athletic department wasn’t to have teams just survive on a day-to-day basis; the aim, said baseball coach Lucas Jones, was to “thrive.”

At the end of a whirlwind five months of competition, preceded by several months of altered offseason work, UL teams certainly have a case to make that they checked that box.

A glance at the postseason showings in the fall, winter and spring campaigns — which produced a school-record eight Old Dominion Athletic Conference titles (three more than any other school in the league) — and a review of the processes implemented to ensure athletes’ safety while competing show Lynchburg had a year worth remembering.

“Together, we can accomplish anything we want to accomplish,” athletic director Jon Waters said.

Waters offered those words as part of an explanation about the work of the school’s COVID-19 taskforce during the past 16 months, a period set in motion last March when the pandemic brought the sports world to a halt.

During the unexpected months off from competition, the taskforce and athletic department came up with plans to eventually bring athletes back safely in the fall.

“They’re gonna sacrifice everything to get it done,” Waters said. “We need to put ourselves in the right spot to let them do [that].”

Regular COVID-19 testing took place during the regular and postseasons, with Lynchburg administering about 4,500 tests to athletes this year.

There were some pauses because of positive tests or contact tracing, but Waters and coaches said their plans for dealing with such setbacks ensured seasons wouldn’t be scuttled entirely.

Jones, whose baseball team didn’t turn up a single positive test, was one of the eight UL squads to capture an ODAC title and one of two to make the NCAA tournament (the NCAA did not put on tourneys for fall and winter sports). Five track & field athletes — members of both the men’s and women’s ODAC-champion outdoor teams — competed at nationals, as well.

Jones led the Hornets to NCAAs and the ODAC title for the first time since 2012. He said he knew his team had “a ton of talent” and could make a postseason run despite a 2-6 start. The run that came to fruition, however, took players committing to “beat COVID.”

UL baseball players, like all the other athletes on campus, had to alter their college experiences to ensure their teammates could continue playing.

“They were pretty quick to learn that, ‘Hey, if we do these things, it gives us the best opportunity to do the thing we love,” said Koudelka, whose team earned its eighth ODAC championship this year.

“No doubt about it: we had a very successful year because our athletes care,” Koudelka said.

Koudelka attributed that success also to the leadership of the university and athletic department, the work of support staff and athletic trainers, and the communication that took place during the year-plus of uncertainty.

The messages given to UL teams during the year carried a sense of belief in each other and of positivity, Waters said. There wasn’t ever a message of, “You’re not gonna get to the finish line,” Jones added.

By the time his team did get there, Jones said he, his players and others in the department felt a sense of “fulfillment.”

Amid the “COVID year” that included the “most difficult 14, 15 months in the history of our university,” Koudelka said, the athletic department at Lynchburg reached new heights. It grew through the uncertainty, he added, “and we came out swinging” heading into the next school year.

Liberty’s defense responded with a stop to force second down. Then another stop forced Troy to use its final timeout. And Storey Jackson came up with a sack to back up the Trojans even more. It was everything Freeze wanted and then some.

TROY, Ala. — Jacob Bodden fulfilled a childhood dream in 2018 when he played in his first collegiate game in his home state. The Liberty left …

There are 25 players from Liberty and Old Dominion that took the field Sept. 1, 2018, when the Flames made their FBS debut. Nineteen of them w…

In Lexington, Washington and Lee and Lynchburg were knotted up for more than 27 minutes. A goal late in the second half by Lynchburg’s Carter …

This Saturday in the college football world will feel different.

More than 185,070 Virginians packed the state's sports venues Saturday in a return to live events

Hugh Freeze got his first look at Liberty’s offensive line depth during Monday morning’s practice. Familiar faces that have been stalwarts in …

Lynchburg’s Chris Darminio follows through on his shot during a game against Stevens in the second round of the NCAA Tournament on May 16 at Shellenberger Field.

Lizzie Davis takes her turn cutting down the net after Lynchburg defeated Roanoke for the ODAC title. Davis was named the most outstanding player of the tournament.

Lynchburg midfielder Ben Mackey (left) and defender Nick Foley celebrate with a personalized handshake after a goal during the ODAC soccer championship against Guilford on April 11 at Shellenberger Field.