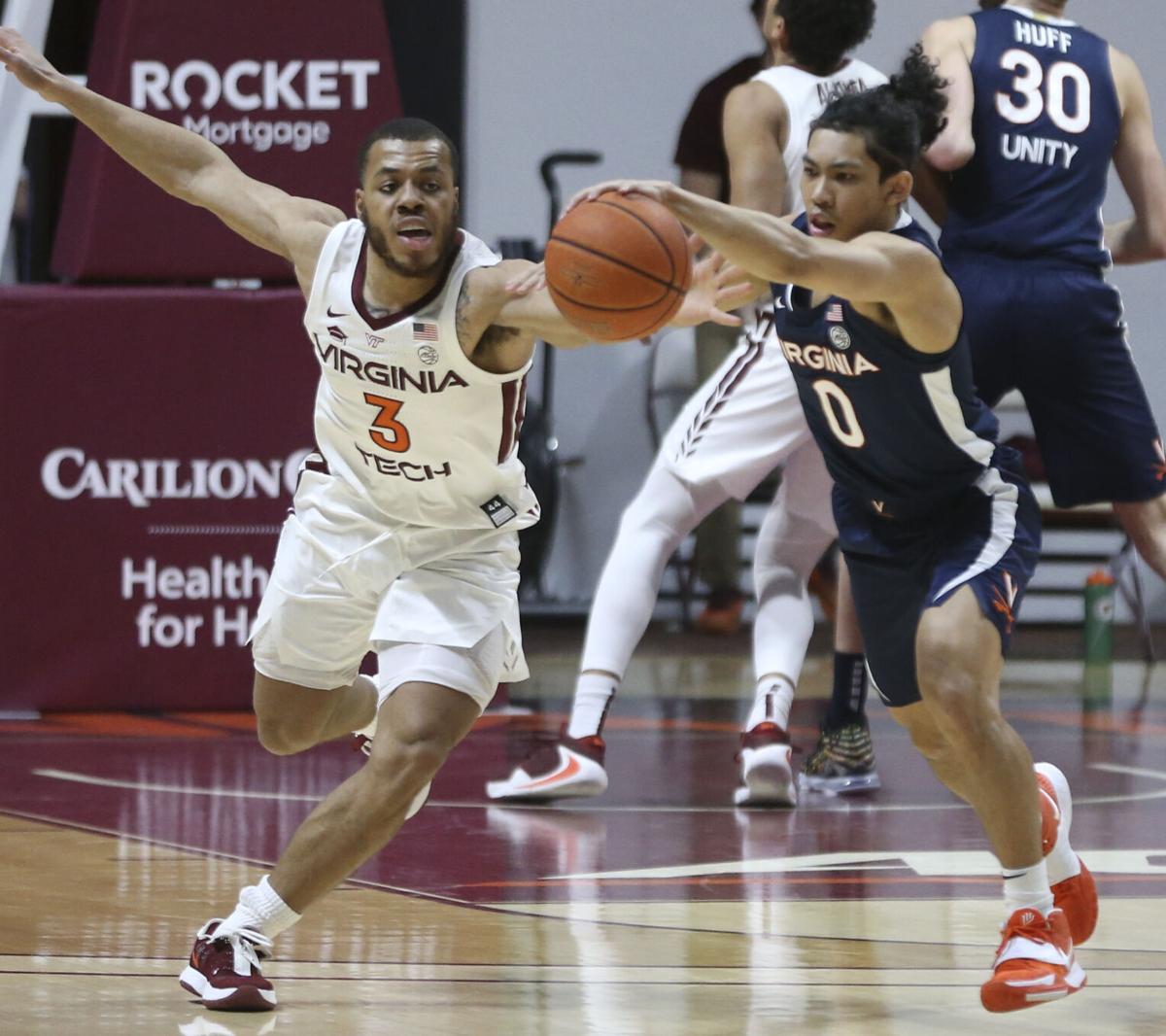 Virginia Tech’s Wabissa Bede (left) and Virginia’s Kihei Clark compete for a tipped ball during the Hokies’ 65-51 win in Blacksburg on Jan. 30. That victory gives Tech a potential ACC tiebreaker with the Cavaliers, who have one fewer conference loss than the Hokies. 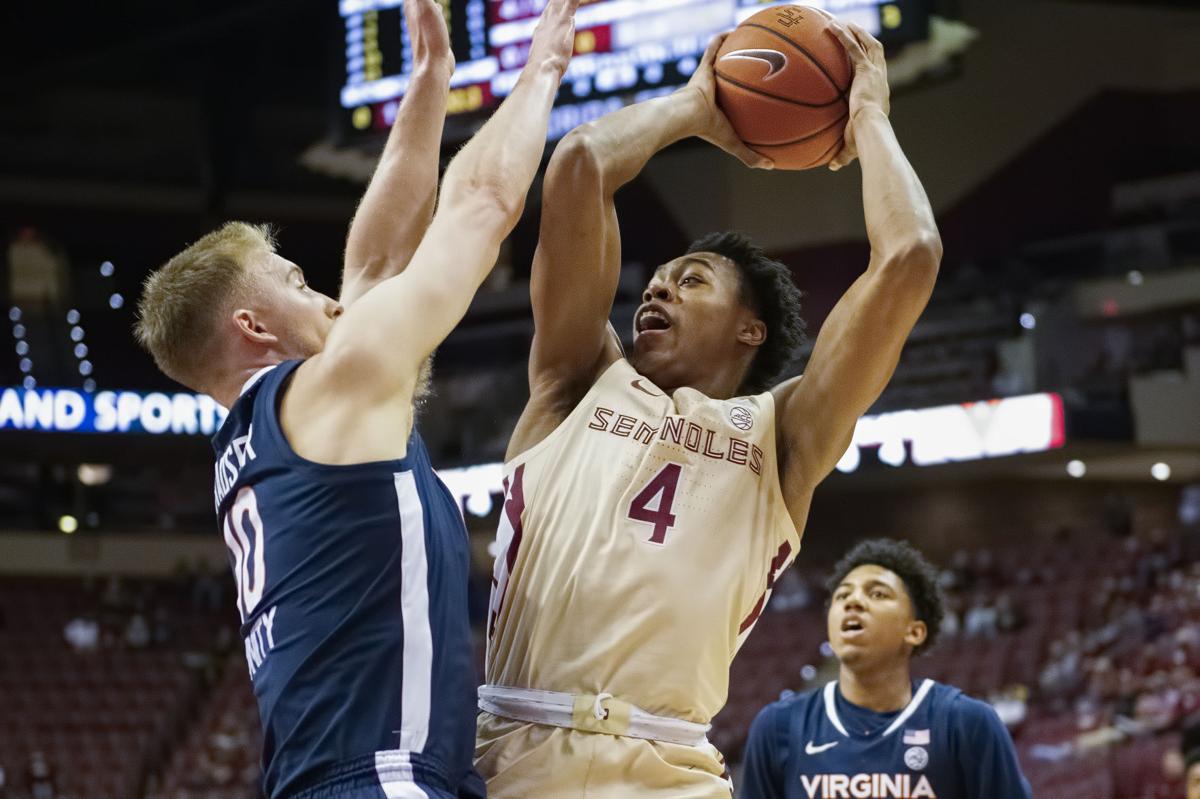 The window is open for Virginia Tech. Just a crack.

Boy, how much do we need to see the Hokies get a chance to play at Florida State on Saturday? After FSU’s 81-60 victory over UVa on Monday night, the Cavaliers (11-2 in conference) and Seminoles (8-2) are tied in the loss column atop the ACC.

Right behind them? The Hokies (8-3), who’ve had three straight games postponed because of COVID-19 issues and aren’t sure whether they’ll be able to play Saturday’s game due to contact tracing.

Tech remains a long shot to pass FSU and UVa and win the regular-season title, but the Hokies do hold a tiebreaker with the Cavaliers after winning that matchup in Cassell Coliseum on Jan. 30. A victory over the Seminoles would give Tech the tiebreaker there, too, as their other scheduled meeting last week was postponed and is unlikely to be made up.

And check out that remaining Tech schedule after Saturday: home against Georgia Tech, Wake Forest and Louisville, followed by a trip to N.C. State on March 6.

The Hokies should be favored in all of those games.

They won’t be on Saturday, assuming they play, and it’s not just because they’ll be rusty. FSU is criminally underpublicized nationally once again. The Seminoles always seem to be big, tough and talented under coach Leonard Hamilton, and this season is no different.

The defending ACC champions dismantled the Cavaliers on Monday to win their 24th consecutive ACC home game — the second-longest streak in conference history.

“Boom, that separation was there right away,” UVa coach Tony Bennett said. “And it was almost like cold water.”

A similar dousing could happen to the Hokies, of course, but we’d like to see them at least get a shot.

Florida State isn’t the only team that’s getting it done at home. Through Monday, the top eight teams in the ACC standings are a combined 41-4 on their home courts in conference play.

Yet another reason next month’s ACC Tournament in Greensboro ought to be wide open.

It could be worse…

Sure, it’s a bummer that the Hokies haven’t played a game since Feb. 6, but look at the bright side: At least they’re not American University.

No Division I team has played fewer games than the Patriot League’s Eagles, who’ve had 11 of their 15 scheduled games either postponed or rescheduled.

American is coming off a 10-day, departmentwide pause announced on Feb. 5 “following a slight increase in the department’s COVID-19 positivity rate.” The Eagles (2-2) haven’t played a game since Jan. 24.

If they return to the court on Saturday as planned, though, Navy had better look out. American is riding a two-game winning streak.

We’re one race into the NASCAR season, and Team Penske already has friction.

Joey Logano’s attempt to block teammate Brad Keselowski on the final lap of Sunday’s Daytona 500 triggered a huge wreck that took out both competitors and allowed Michael McDowell to score an upset win.

Keselowski long has been a vocal critic of blocking on superspeedways, but this isn’t even the first time Logano’s decision to do it has ruined Keselowski’s day. In last year’s Busch Clash at Daytona, Logano tried to block Kyle Busch, which caused a wreck that collected Keselowski.

The Team Penske drivers were able to sort through their differences that time. This year’s incident promises to be a little tougher to overcome, given that Keselowski was so close to the Daytona 500 victory that has eluded him.

He was relatively calm in his postrace TV interview. But At 1:34 a.m. Monday, Keselowski tweeted: “My body is fine but my heart is broke.”

And we all know who broke it.

Virginia Tech’s Wabissa Bede (left) and Virginia’s Kihei Clark compete for a tipped ball during the Hokies’ 65-51 win in Blacksburg on Jan. 30. That victory gives Tech a potential ACC tiebreaker with the Cavaliers, who have one fewer conference loss than the Hokies.