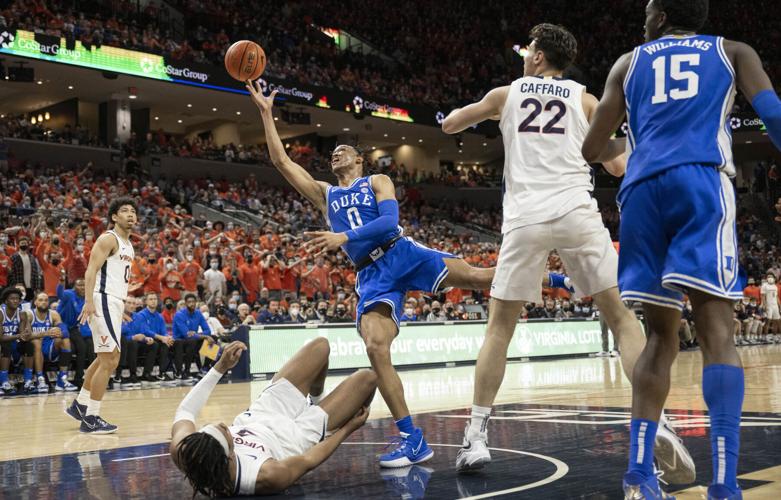 Duke’s Wendell Moore Jr. releases a shot as Virginia’s Armaan Franklin is whistled for a block while attempting to draw a charge during Wednesday’s game at John Paul Jones Arena in Charlottesville. 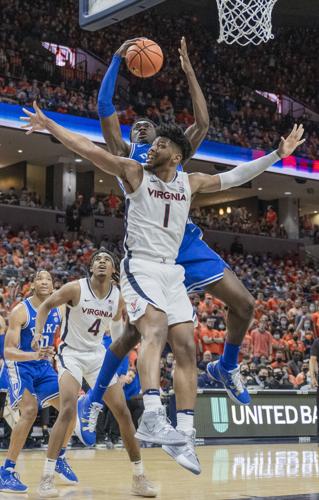 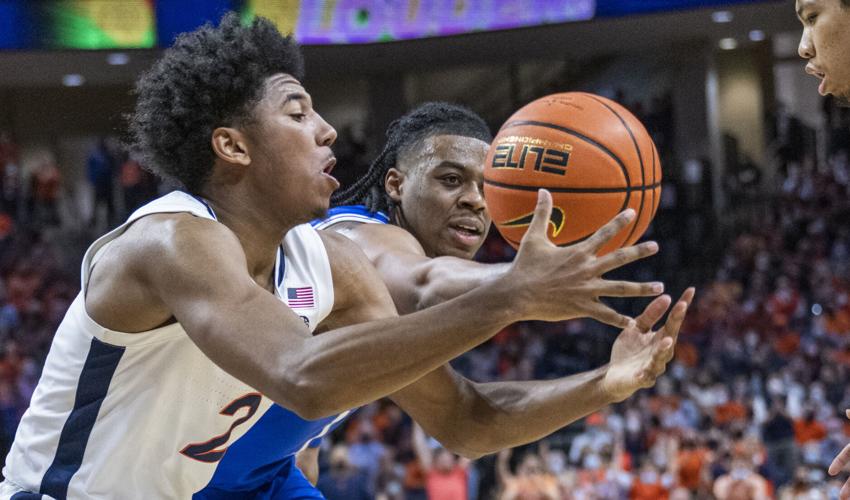 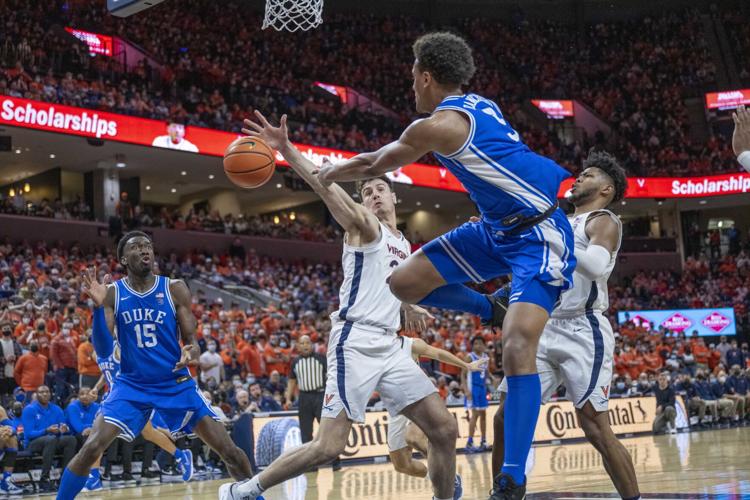 Duke’s Paolo Banchero gets off a pass to Mark Williams (15) before going out of bounds as Virginia’s Francisco Caffaro attempts to deflect the ball during Wednesday’s ACC game at John Paul Jones Arena. 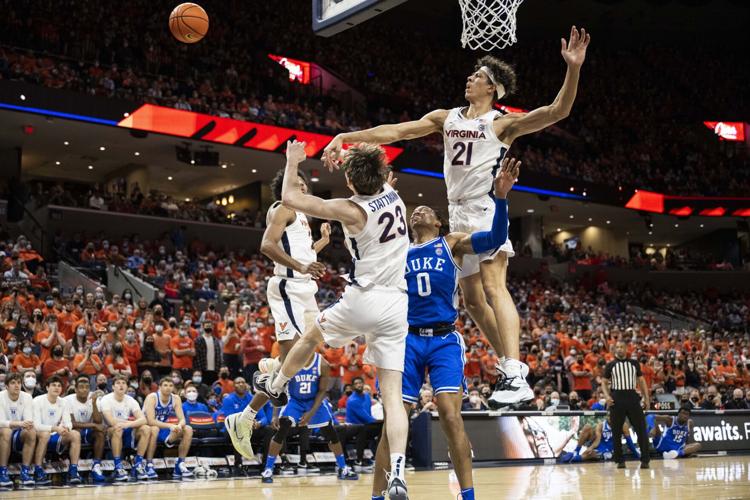 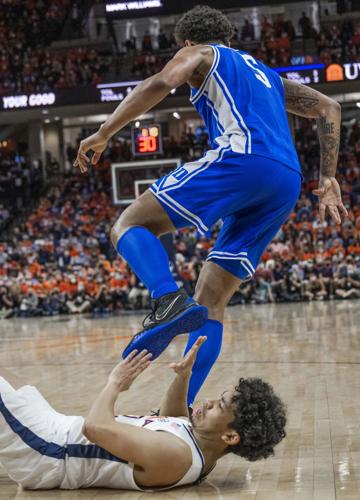 Virginia’s Kihei Clarks protects his face from being kicked by Duke's Paolo Banchero on Wednesday.

Then, they made him sweat things out the rest of the night.

Senior point guard Kihei Clark scored a career-high 25 points, including hitting six 3-pointers in the first half, but the No. 9 Blue Devils fought off the Cavaliers, denying them a key win in their quest for an eighth straight NCAA tournament appearance.

Leesburg’s Jeremy Roach had a big game in his home state, scoring 15 to lead first-place Duke to an 65-61 win. Freshman A.J. Griffin helped the Blue Devils put Virginia away down the stretch, scoring eight of his 13 points in the final 3:39 of the game.

UVa switched senior forward Jayden Gardner onto Griffin in the final minute, and Gardner nearly forced Griffin into a turnover. But Duke kept possession on a held-ball call from the officials.

Gardner scored 14 points on the night, 11 of which came in the second half.

Gardner and UVa’s defense once stifled Duke star freshman Paolo Banchero, holding him to eight points on 2-of-13 shooting.

Virginia, which stunned Duke with a late 3-pointer from Reece Beekman two weeks ago at Cameron Indoor Stadium, was seeking its first regular-season sweep of the Blue Devils since 1995.

Wednesday night, the ACC’s top team once again brought out the best in the Cavaliers. And for the seventh time in the past nine meetings between the two teams, the game was decided by four points or less.

Duke missed its first three shots of the night before Mark Williams, working against Francisco Caffaro, flipped in a short shot to tie the game 2-2.

"He kept us in it offensively, was moving hard," Bennett said. "He just kind of got in the zone, and the guys were finding him. Kihei was really all we had,  pretty much, early."

Theo John tied the game 13-13 with 11:47 to play in the half when Kadin Shedrick went down trying to draw a charge and John threw down a two-handed dunk, swinging on the rim with Shedrick sprawled out on the court below him.

It was part of an 8-0 run that put the Blue Devils up 17-13 with 6:45 left before the break before Clark answered with three straight 3-pointers. UVa went back on top 22-18 as a result, prompting a timeout from Krzyzewski.

"He's as good a guard as there is in the league," Krzyzewski said of Clark.

A 3-pointer by Trevor Keels and an inside basket from Banchero sent Duke to the locker room up 30-25.

Virginia opened the second half half scoring four straight and prompting another Duke timeout. But from there, Duke took control.

A 7-0 run by the Cavaliers got them within a point, down 52-51 after a jumper in the lane by Clark with 5:02 left. Gardner had a chance to give UVa the lead with a jumper that just missed with 3:55 to play.

When Griffin hit a contested 3 at the other end, the Blue Devils had the cushion that ultimately was enough for the win, though UVa remained within a shot through the final minutes of play.

In his Hall of Fame career, Krzyzewski is 6-3 at JPJ and 58-21 all-time against UVa. Before the game, Bennett addressed the crowd, praising Krzyzewski for his success and longevity and acknowledging the partnership between the legendary coach and his wife, Mickie, who was seated courtside for the game.

Bennett told Krzyzewski he and his program wanted to “acknowledge your monumental contributions to the basketball world. … Your success is remarkable and you’ve stood the test of time.”

During the week, Krzyzewski was asked about the emergence of the Virginia program under Bennett.

“They’ve done more than emerge. They’re securely planted as one of the top programs in the country and Tony being one of the best coaches in the country,” Krzyzewski said. “They play basketball at a really high level on both ends of the court.”

Wednesday night, they did it again. But in the end, as it has been so many times before, it was Krzyzewski’s night.

Duke’s Wendell Moore Jr. releases a shot as Virginia’s Armaan Franklin is whistled for a block while attempting to draw a charge during Wednesday’s game at John Paul Jones Arena in Charlottesville.

Duke’s Paolo Banchero gets off a pass to Mark Williams (15) before going out of bounds as Virginia’s Francisco Caffaro attempts to deflect the ball during Wednesday’s ACC game at John Paul Jones Arena.

Virginia’s Kihei Clarks protects his face from being kicked by Duke's Paolo Banchero on Wednesday.