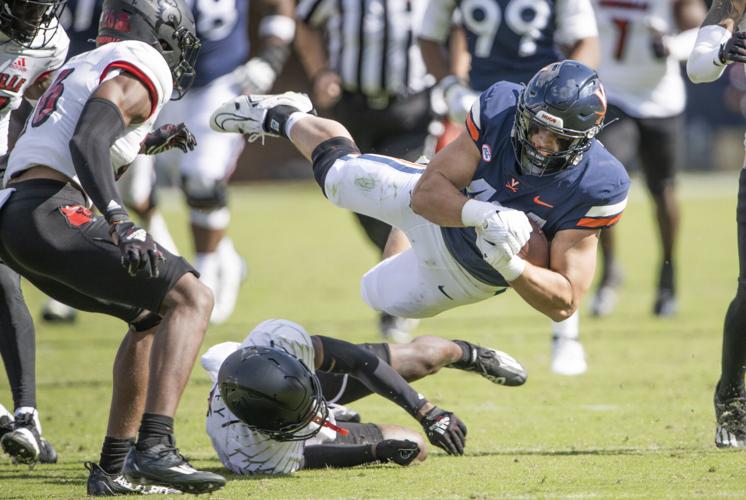 Virginia tight end Sackett Wood (E.C. Glass) is upended after catching a pass against Louisville during an October game at Scott Stadium in Charlottesville. 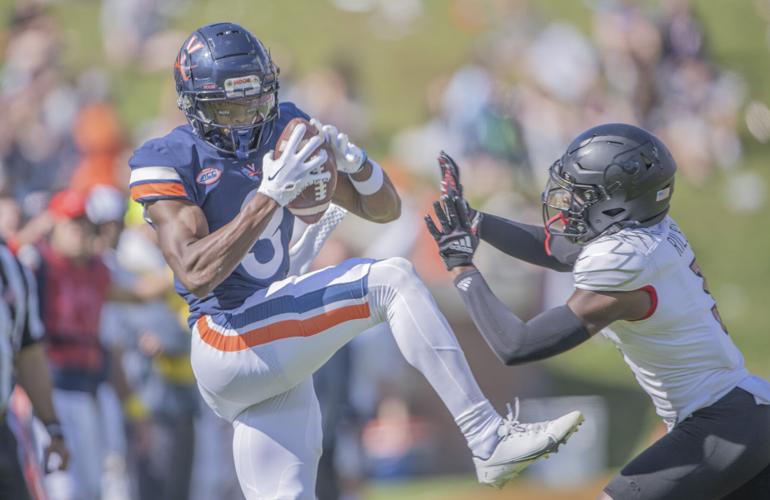 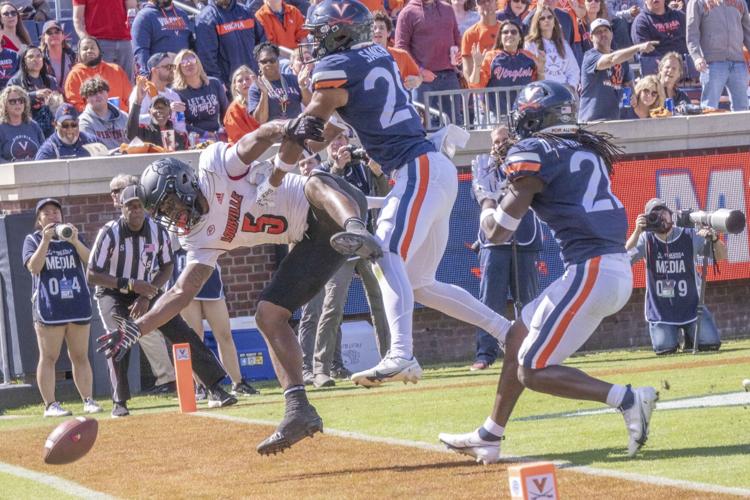 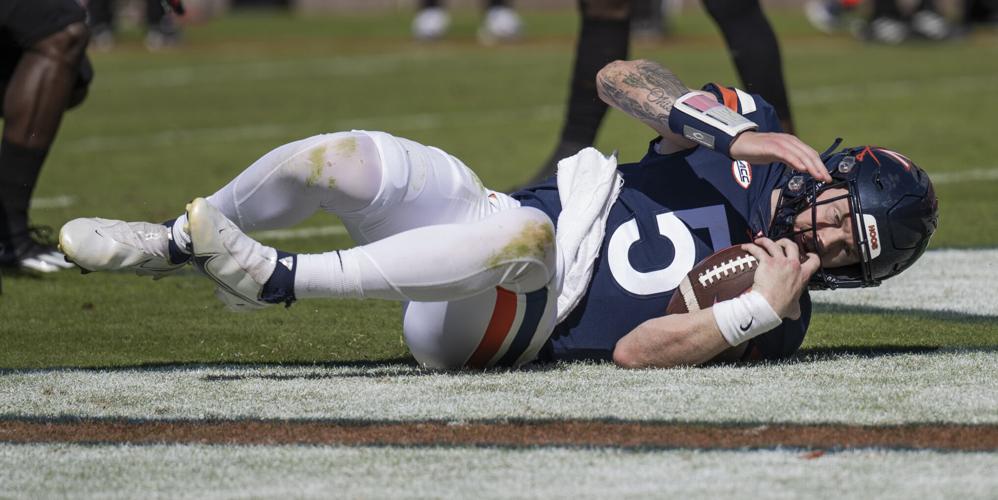 Cavaliers quarterback Brennan Armstrong dives into the end zone for a touchdown against Louisville on Saturday at Scott Stadium in Charlottesville.

CHARLOTTESVILLE — Virginia opened Saturday's game better than it had in each of the previous two outings.

But the Cavaliers never got the memo about having to play the rest of the contest well, too.

“We kind of got complacent,” senior cornerback Anthony Johnson said.

Louisville’s run of 20 straight points from the second quarter through the early third stanza propelled the visiting Cardinals — without starting quarterback Malik Cunningham — to a 34-17 Atlantic Coast Conference win over UVa (2-4, 0-3) on an immaculate, sun-soaked fall afternoon at Scott Stadium.

The loss was the Cavaliers’ third straight entering their bye week, and the Hoos’ collapse began when they were ahead 10-0 late in the first quarter.

“What happens is two things,” first-year UVa coach Tony Elliott said. “When we have success, guys get satisfied. They get fat and happy, and it doesn’t matter what the score is. That’s something I talk about a lot is, ‘You can’t play to the scoreboard.’ ... And then when adversity hits, we’re all looking around and we don’t have guys now who are stepping forward, saying, ‘I’m going to be the guy who makes the play.’”

Quarterback Brennan Armstrong’s fumble in the red zone provided the Cardinals (3-3, 1-3) momentum when they were without any, and they capitalized by rattling off 13 second-quarter points to take a 13-10 advantage heading into the locker room.

Backup signal-caller Brock Domann, who got the nod in place of Cunningham, used a 44-yard touchdown run on a fourth-and-2 to knot the score at 10 after a fake handoff fooled and froze all of UVa’s defense plus its orange-and-navy-clad spectators in attendance.

Domann raced into the end zone without any member of the Cavaliers’ defense within reach of trying to tackle him.

“They’ve got a nice offensive scheme and they’ve got a system,” UVa defensive coordinator John Rudzinski said of Louisville’s offensive success with Domann making his first FBS start. “That’s what system teams do. They plug in the next guy to go execute.”

Louisville added a field goal to end the first half, and didn’t stop scoring.

The Cardinals struck again on their initial possession of the second half. Domann, who finished 17 of 30 for 275 yards, found wide receiver Tyler Hudson on a pair of passes to put Louisville in UVa territory, before connecting with wide receiver Marshon Ford for a 32-yard touchdown.

At that point, the Cavs were behind by double digits and they never could catch up.

“There is a big weight of responsibility,” Domann said, “and the main thing I wanted to do was my job.”

Armstrong recorded an 11-yard touchdown run in the third quarter, but he was intercepted later in the period and Louisville was able to convert that turnover into points when running back Trevion Cooley crossed the goal line on a 1-yard touchdown run.

Without Cunningham, Louisville racked up 198 rushing yards with little resistance from the Cavaliers. Domann had 71 yards on the ground, and Cooley had a game-high 77 rushing yards. Domann, Cooley and Jawhar Jordan each had rushing touchdowns for the Cardinals.

Avoiding the slow start that plagued them in recent losses at Syracuse and Duke, the Hoos had their chance to bury Louisville for good in that first quarter.

Armstrong’s 40-yard touchdown pass to wide receiver Dontayvion Wicks gave the Hoos a 10-0 lead over the Cardinals, whose secondary struggled early on. Armstrong used a free play, in which Louisville jumped offside, to find Wicks in stride on the toss into the end zone, giving the home faithful a flashback to 2021 when the pair connected for nine touchdowns.

Between the field goal and the touchdown, Johnson intercepted Domann. Wicks’ score after Johnson’s touchdown was the Cavaliers’ first touchdown following a forced turnover this year. UVa had forced nine turnovers entering Saturday.

But Armstrong’s fumble in the red zone with about three minutes remaining in the first quarter ruined his squad’s opportunity to be ahead 13-0 or 17-0 and gifted Louisville hope.

“He’s not trying to fumble,” Elliott said. “But when we’re coaching you in practice, take the coaching.”

Elliott said in practice this week he and his offensive players discussed the proper way to carry a football, and he even provided a history lesson of the high-and-tight fundamental.

“It’s a Virginia guy that went with the high-and-tight in Tiki Barber,” Elliott said. “So, I’m trying to create some accountability, but there’s a lot of, especially with your veteran guys … there’s muscle memory and when you get in the heat of the battle, you revert. That’s where we have to be disciplined.”

The Cardinals outgained UVa 216-13 in the second quarter, and benefitted from three UVa turnovers overall.

He departed Scott Stadium encouraged by his own performance, but at the same time felt like the effort was missing the most important element.

Virginia tight end Sackett Wood (E.C. Glass) is upended after catching a pass against Louisville during an October game at Scott Stadium in Charlottesville.

Cavaliers quarterback Brennan Armstrong dives into the end zone for a touchdown against Louisville on Saturday at Scott Stadium in Charlottesville.