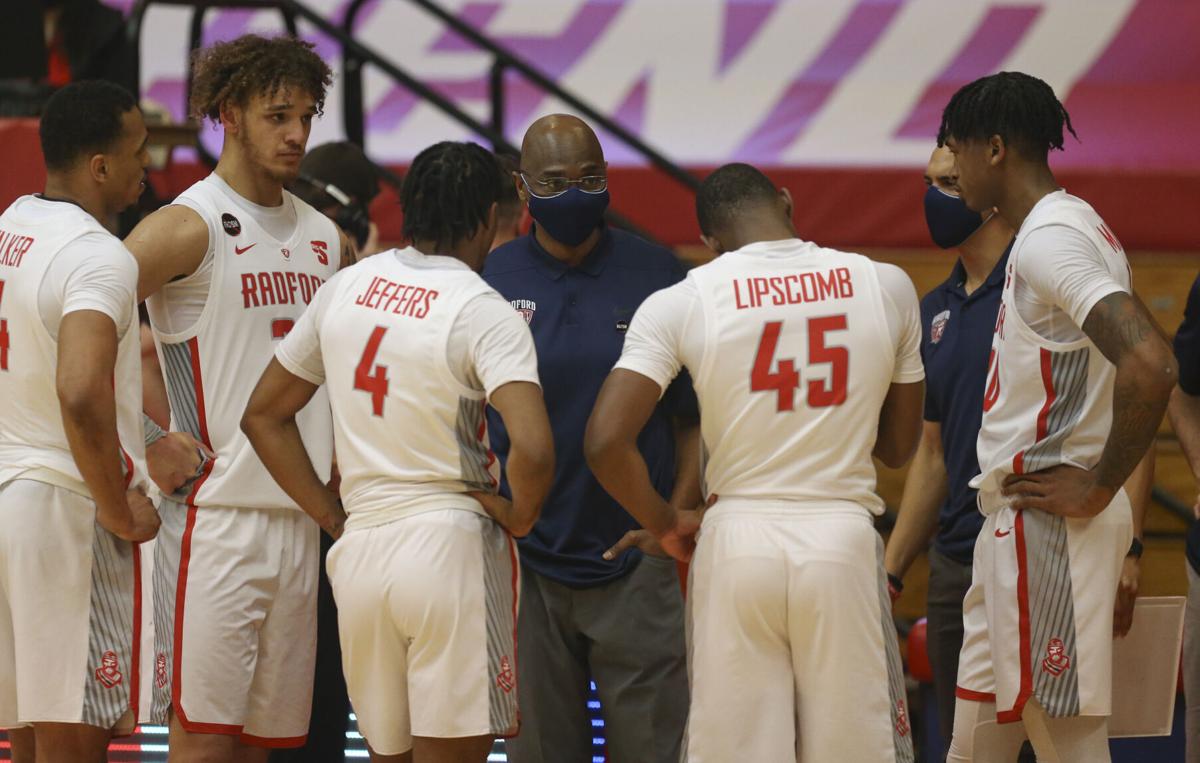 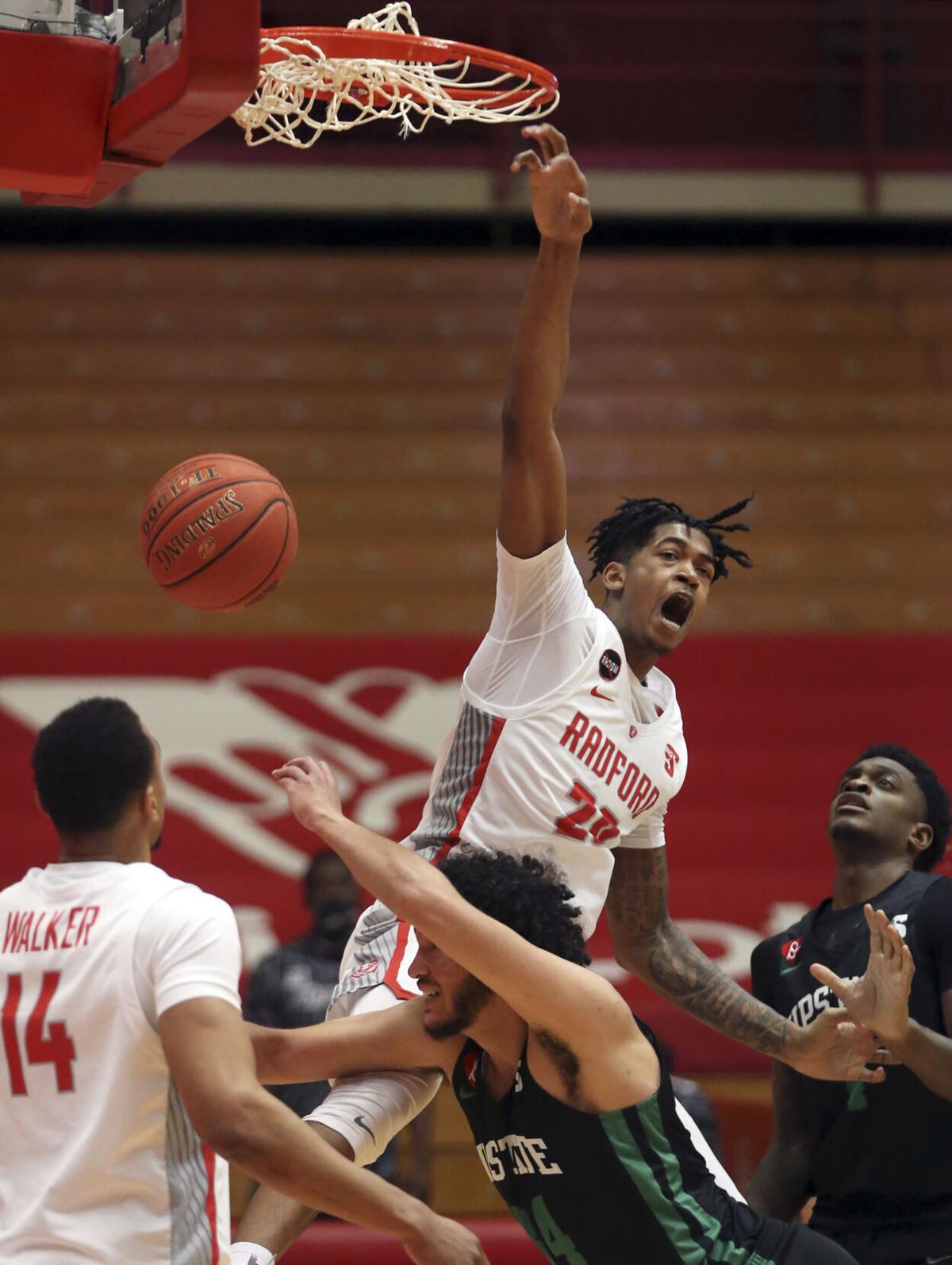 Radford’s Dravon Mangum (center) and the second-place Highlanders will host first-place Winthrop at 6 p.m. Thursday and 7 p.m. Friday. ESPN Plus will air Thursday’s game and ESPN3 will air Friday’s game. 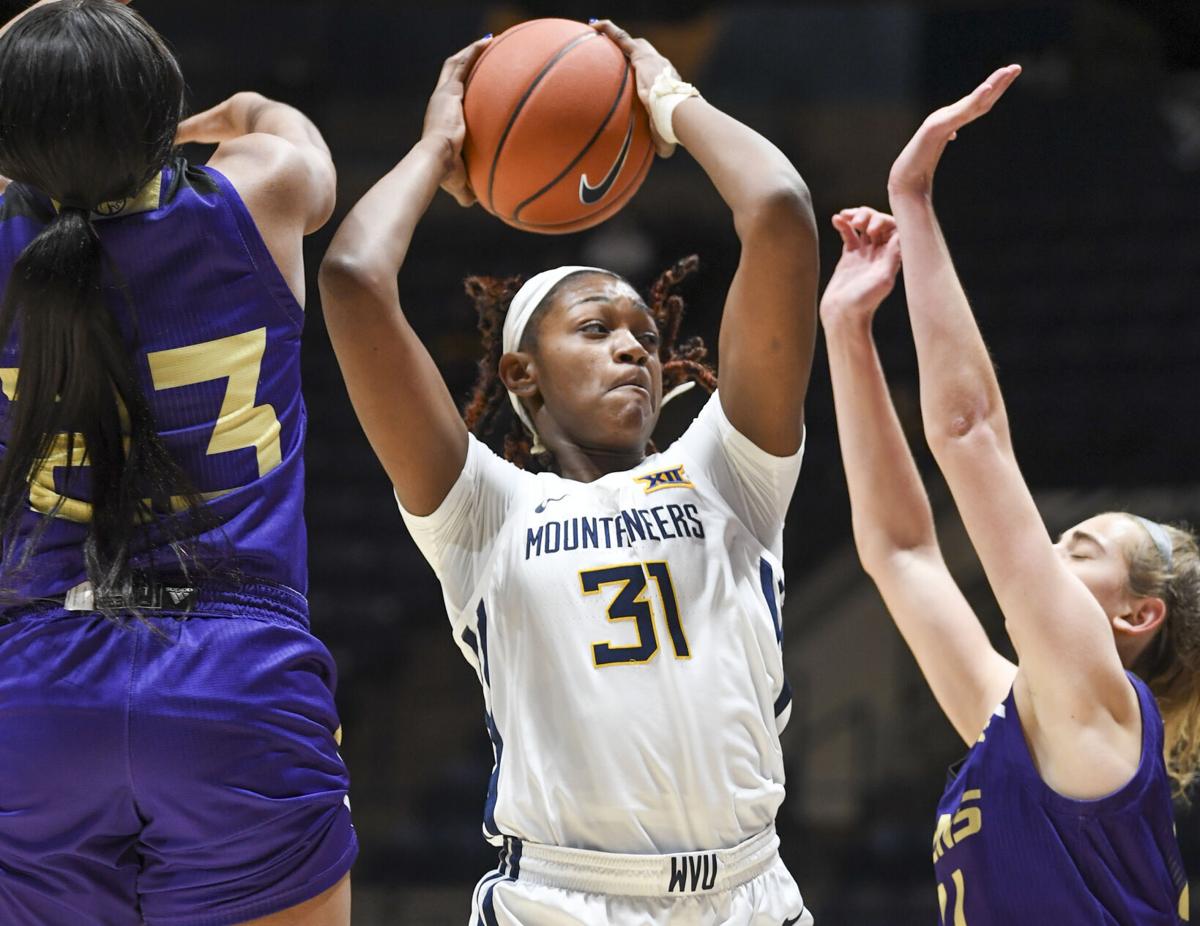 But first place will be on the line when Winthrop visits Radford at 6 p.m. Thursday and 7 p.m. Friday.

Winthrop (16-1, 13-1) is atop the league standings. The Eagles opened eyes around the country by winning their first 16 games.

Despite having to replace all of last year’s starters, the Highlanders (13-7, 12-2) are in second place — just one game out of first.

“I knew they were going to be good because they’re always good,” Winthrop coach Pat Kelsey said Wednesday in a phone interview. “They have a great tradition. They have a system they believe in. They know the parts that fit into that system and they do a great job recruiting to it.

“That’s a tribute to the caliber of program they have, that they’re able to just reload and continue to have success.

“They’re always, like we are, a strong, physical team. What they do and who they are is always going to be rooted in that. We like to think that’s the same thing for us.”

The Eagles tied Radford for the regular-season title last year and won the league tournament.

The Eagles lead the Big South in scoring offense (81.3 ppg).

“They push the ball up the floor really fast,” Jones said. “They score a lot of points in transition. They also are tremendous on the offensive glass. They have guys that can score inside, get inside the paint then kick it out to shooters.

“We can’t give them a lot of points in transition, which means we’ve got to take care of the ball, which we haven’t done a great job with all season long.”

Winthrop leads the league in steals (8.3 spg), while Radford is tied for next-to-last in turnovers (15.4 per game).

“The No. 1 thing that our guys have bought into is that in order to have a chance to win a game, you have to defend and rebound,” Jones said. “We’ve done that well this year.”

The Eagles rank second in the Big South in rebounding margin (outrebounding foes by 8.5 rpg).

“It’s going to be a battle of wills,” Kelsey said.

“We’ve got to keep them off the offensive glass so they don’t get second-chance opportunities,” Jones said. “And then we’ve got to sit down in the halfcourt and really guard them and make it hard on them.”

Rochelle Norris tweeted Tuesday night that she intends to transfer from West Virginia to Virginia Tech.

She said Wednesday in a phone interview that she had offers from Virginia, Boston College, Texas Tech and Xavier, as well as the Hokies.

Norris is from Stafford County.

“Virginia Tech, … it’s closer to home, so now more of my family can come to my games,” Norris said. “And I feel like [Tech] Coach [Kenny] Brooks will take me to the next level of developing my game.

“I already have the physicality aspect of the game from West Virginia, but … he’s going to teach me to be more skilled with my game.”

She has remained at WVU as a student; she plans to transfer in May.

Norris averaged 3.2 points, 3.5 rebounds and 13.6 minutes in 13 games as a third-year sophomore this season. She started twice. She scored a season-high nine points against both James Madison and Texas Tech.

“I felt like my time at West Virginia was done,” she said. “It was time to further my basketball career somewhere else.”

She sat out the 2018-19 season as a medical redshirt after suffering a knee injury.

Brooks had offered Norris a scholarship when she was in high school.

Harvey’s wife Karen, who is one of the team’s assistant coaches, said she began having symptoms after Ferrum’s Jan. 29 loss to Randolph and tested positive on Feb. 1. Bryan Harvey went into quarantine on Jan. 30 because of his exposure to his wife.

Bryan Harvey said he tested positive Monday. He hopes to rejoin the Panthers on Feb. 18.

“I’ve had some … head-flu-type symptoms, but they’ve been relatively minor,” he said. “I’m feeling a little bit better right now than I was a couple days ago.”

Karen Harvey, who is also the Ferrum women’s lacrosse coach, returned to work this week.

“I was really sick for … five days,” she said. “I felt awful. But then I started to feel better. I lost my taste and smell, but hopefully that’ll come back soon.”

Ferrum was supposed to play Roanoke on Wednesday, but that game was postponed earlier in the day. Bryan Harvey said a Ferrum player has flu-like symptoms and is quarantining but had a negative rapid test. The game was postponed because the school does not have her PCR test results yet.

Chiefs end up on top in potential game of the year

Chiefs end up on top in potential game of the year

Radford’s Dravon Mangum (center) and the second-place Highlanders will host first-place Winthrop at 6 p.m. Thursday and 7 p.m. Friday. ESPN Plus will air Thursday’s game and ESPN3 will air Friday’s game.