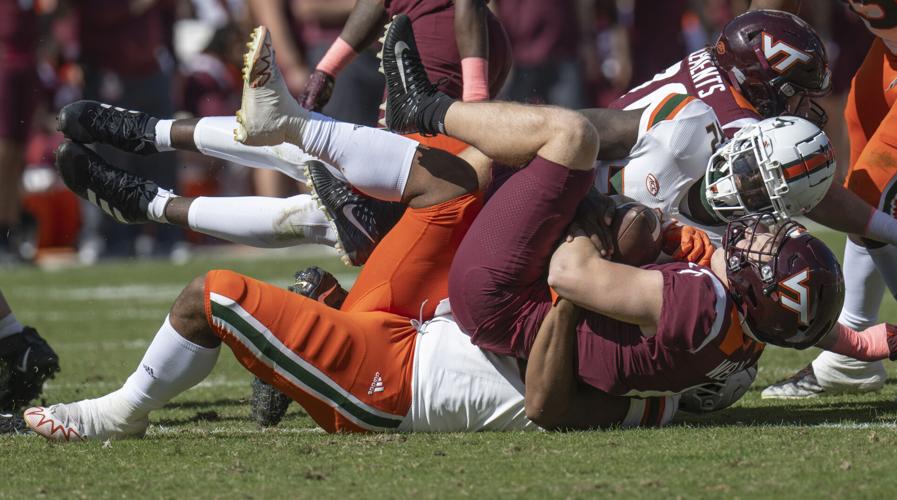 Virginia Tech Hokies quarterback Grant Wells (6) gets tackled by a pair of Miami defenders during Saturday’s game at Lane Stadium in Blacksburg. 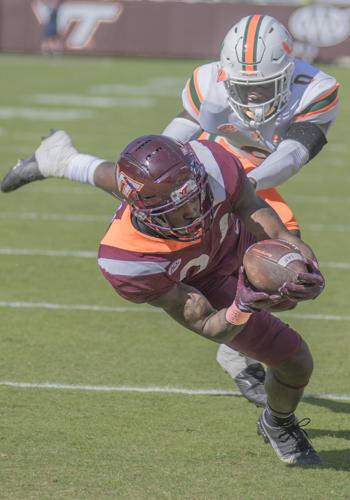 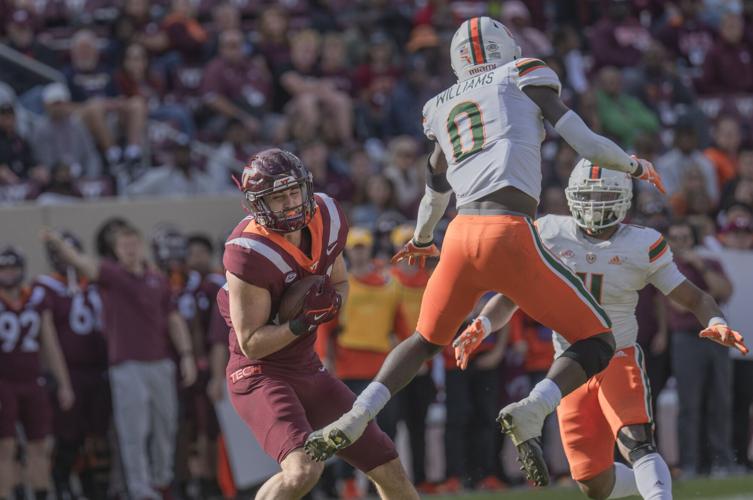 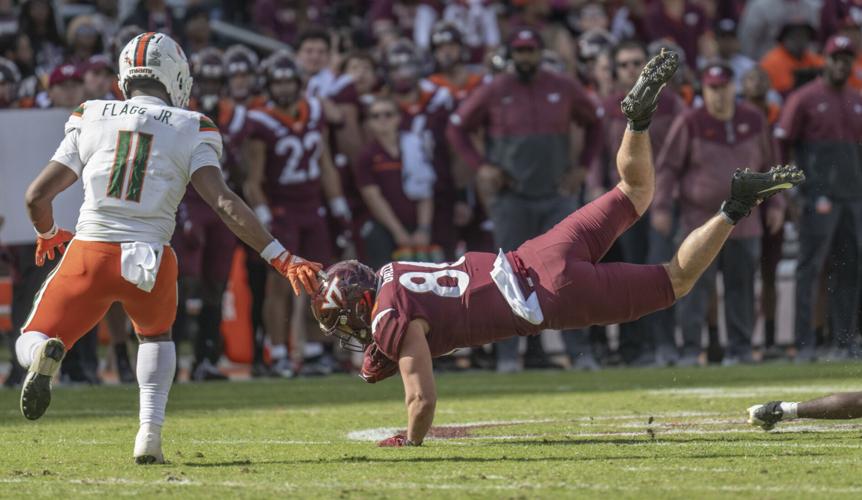 By Aaron McFarling The Roanoke Times

The Hokies dropped their fourth consecutive game Saturday, gaining just 257 total yards and seeing their late rally fall short in a 20-14 loss to Miami in front of a sellout crowd at Lane Stadium.

"We’ve got to stop stubbing our toe and finding ways to not make people earn it," Tech coach Brent Pry said. "We’ve got to stop that. There’s signs of the team we can be. We’ve got to look at and be accountable as coaches and players in every little area where we can improve and be the player, the coach, the unit that we can be. Because it’s there."

The final matchup between these teams as divisional opponents saw the Hurricanes (3-3, 1-1 ACC) build a 20-0 lead on their way to breaking a three-game losing streak.

Tech (2-5, 1-3) was in danger of being shut out for the first time since 1995 before getting a Malachi Thomas touchdown reception with 12:10 remaining.

“As a team, we’ve got to come out swinging first," Tech defensive lineman Josh Fuga said "We’ve got to start fast, we’ve got to play physical. The game demands four quarters. We can’t play half.”

Tech cut the deficit to 20-14 on a Wells touchdown run with 3:20 left, but Miami converted a pair of third downs on the ensuing possession to run out the clock.

“It’s almost a shame that we have to keep saying that — that we’re that close — but it really is the truth," Tech receiver Kaleb Smith said. "That means there is something there, we’ve just got to figure out [how] to have both the offense and defense clicking at the same time.”

NFL prospect Tyler Van Dyke threw for 351 yards and two touchdowns for the Hurricanes, who overcame 17 penalties for 159 yards in a game with minimal flow.

Miami dominated the first half, outgaining the Hokies by a nearly 3-to-1 margin.

Trouble started for Tech on the opening drive. Freshman Dae’Quan Wright caught a pass on third-and-6 and picked up chunk yardage before fumbling the ball, which was recovered by Miami. The Hurricanes needed just four plays to forge 65 yards and find the end zone and take a 7-0 lead.

Tech’s offense didn’t cross the 100-yard threshold until the 3:34 mark of the second quarter. By that point, the Hurricanes led 17-0.

Van Dyke connected on 15 of his first 20 passing attempts while engineering three early scoring drives. Seven of those completions gained 15 yards or more, as Miami’s receivers found gaps in the Tech secondary or made contested catches when they didn’t.

Tech, meanwhile, missed its rare chances to get back in the game earlier than it did. Receiver Da'Wain Lofton had a potential touchdown pass bounce off his chest early in the third quarter.

"That thing could be a little bit different if we put a few points on the board in the first half."

The Hokies' fourth-quarter rally included drives of 65 and 80 yards. They gained more yards on those two possessions (145) than they did in the first three quarters combined (118).

"It seems like one more possession would have changed that game," Wells said. "We just ran out of time.

Looking for any spark it can find on offense, Virginia Tech will explore ways to use quarterback Grant Wells more as a rushing threat. Wells was the team’s second-leading rusher Saturday.

“He can run, and he’s confident in it," Pry said. “Obviously, that’s one of the things that he brings to the table, and that’s a strength that for me has been on my mind: How much do you really want to run him? How much can we afford to run him? Do we need to do it more?

“We’re going to look at that. Because I think that’s tough to defend. And obviously we’ve got a couple plays for him, but we can expand that package.”

Wells said he enjoys running the ball and has been encouraged to do so by offensive coordinator Tyler Bowen.

“It seems like when the quarterback runs the ball well, it opens up a lot,” Wells said.

The Hokies had to play most of the final three quarters without starting safety Nasir Peoples, who was ejected early in the second period on a targeting call.

Peoples, a redshirt senior, had six tackles before his disqualification. On the last one, he used his shoulder to hit Will Mallory’s head after Mallory reeled in a 20-yard pass. The call was reviewed and upheld.

“Nasir is one of those guys, he’s kind of an admiral back there in the secondary,” Pry said. “He’s a model of consistency, and it just puts a lot of pressure on the other guys with the unfortunate call that he’s out of the game. We need him in the rotation for sure.”

Linebacker Alan Tisdale finished as Tech’s second-leading tackler with nine in his first game of the season. He also had one quarterback hurry.

The fifth-year senior had practiced with the team all fall as he worked through an NCAA eligibility issue unrelated to academics. He was declared eligible early in the week.

The Hokies led 27-16 and had a first-and-goal from the Georgia Tech 10-yard line with less than 11 minutes remaining. Then the collapse began.

Virginia Tech Hokies quarterback Grant Wells (6) gets tackled by a pair of Miami defenders during Saturday’s game at Lane Stadium in Blacksburg.