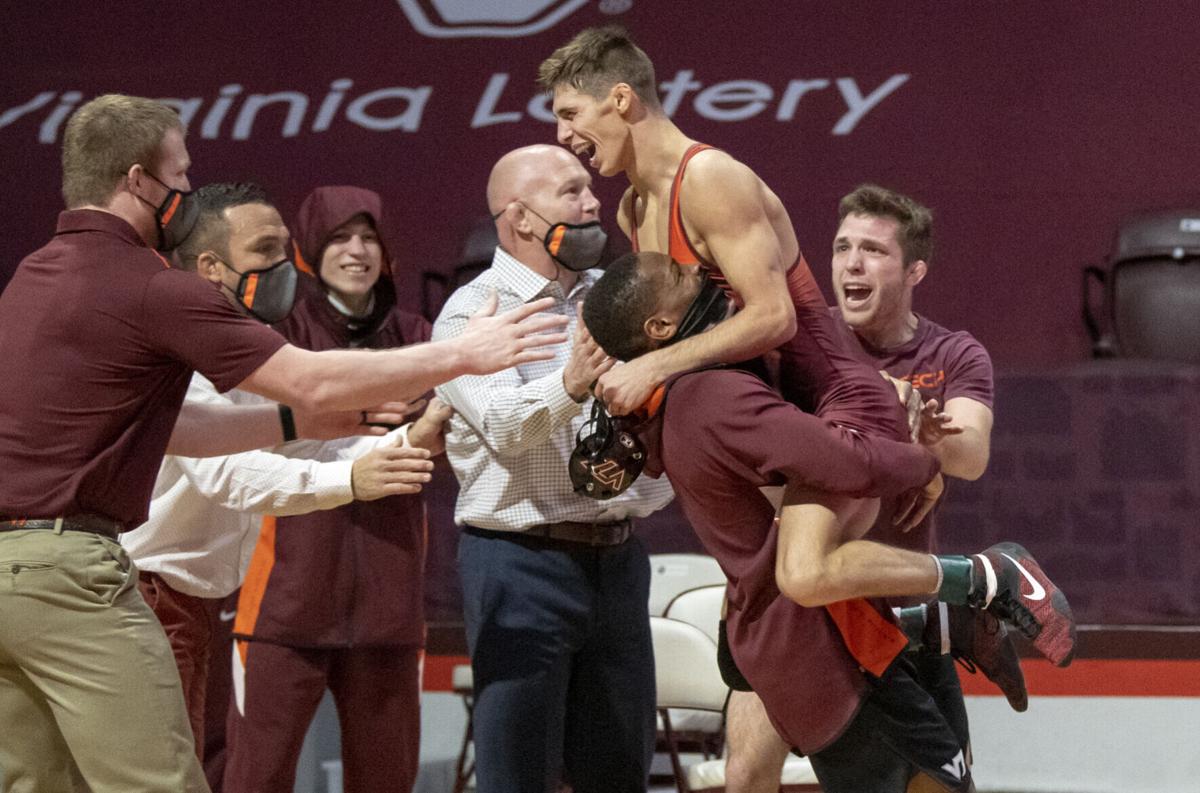 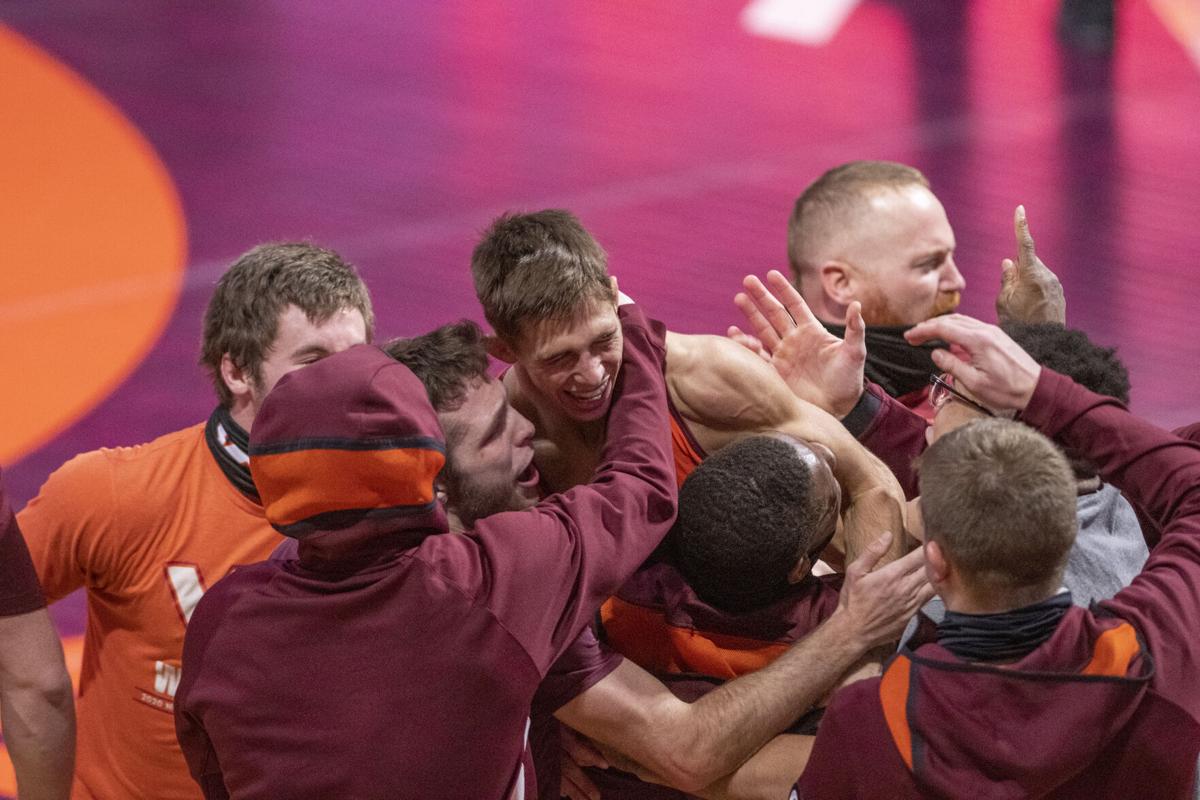 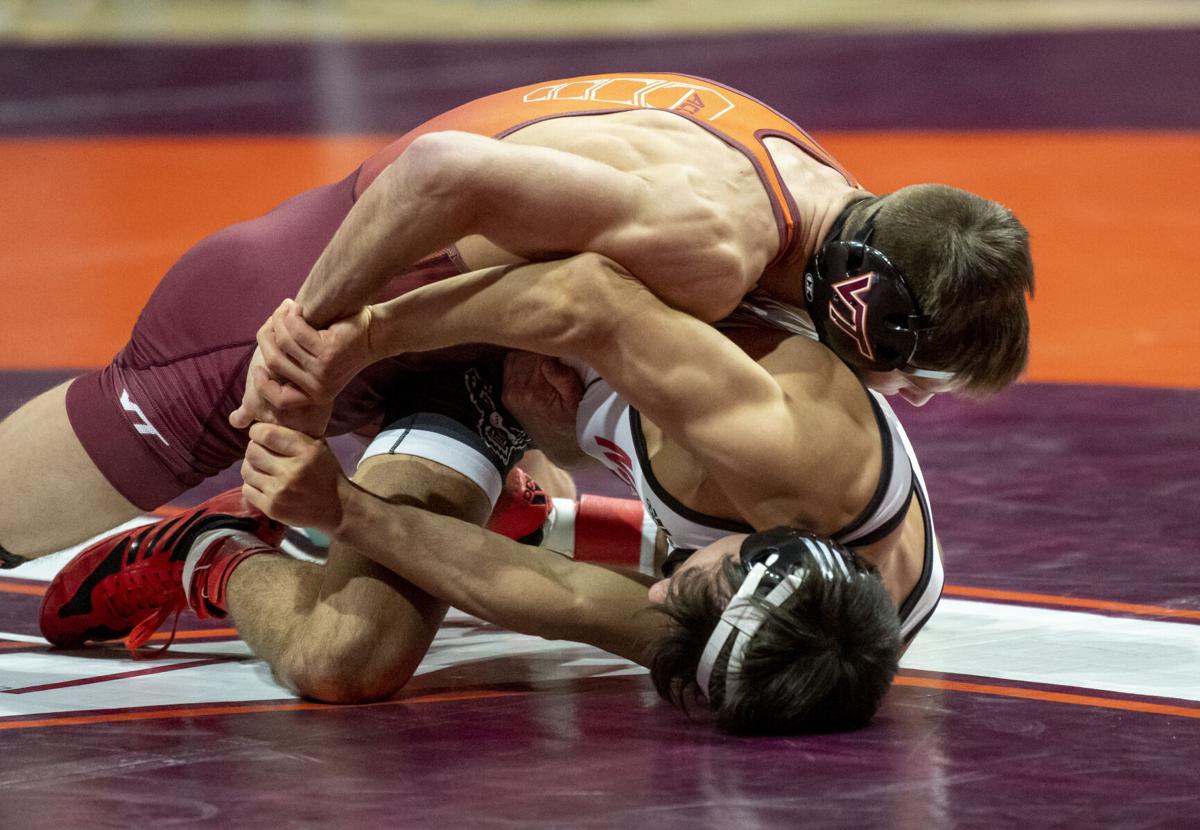 Virginia Tech redshirt freshman Sam Latona (top) recorded a takedown and a two-point near fall of Jakob Camacho in the final seconds to win 7-4 in the final match of the Hokies' 17-16 victory over North Carolina State last Friday. 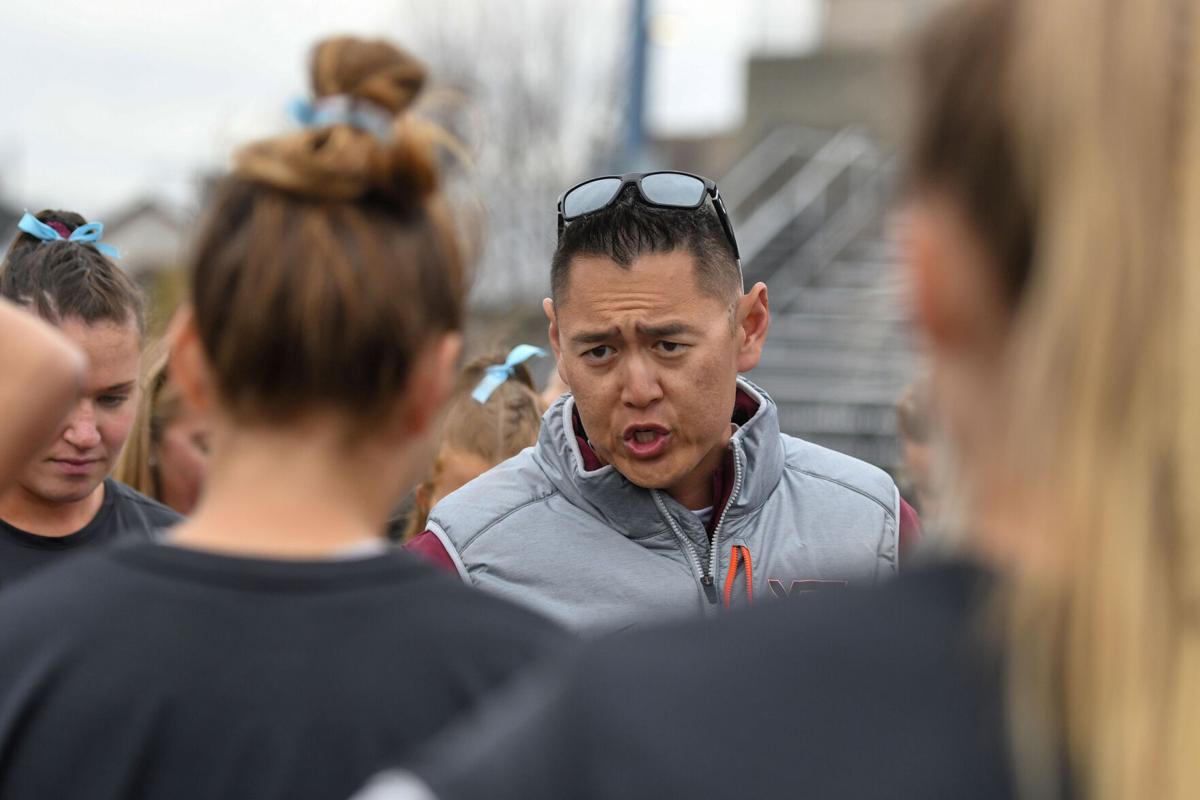 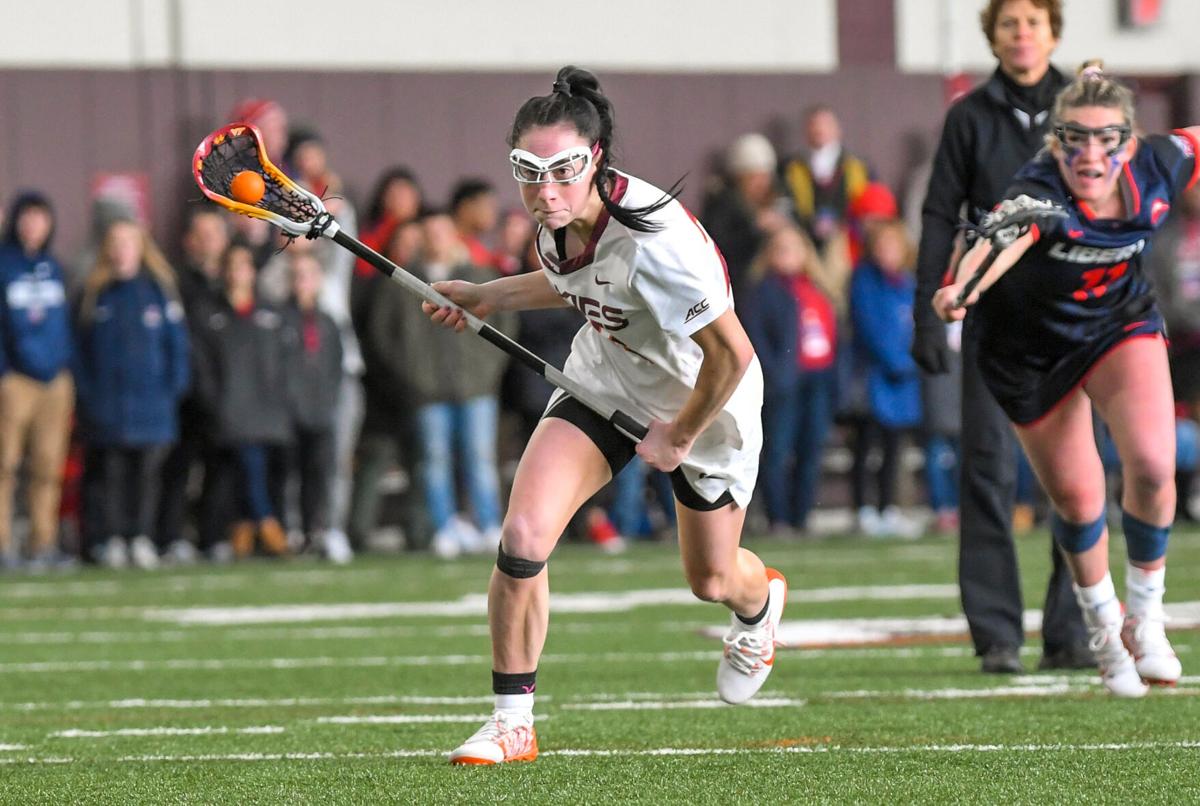 The Virginia Tech wrestling team is coming off its biggest win of the season, but there is still plenty on the line in its next match.

The Hokies, who rose from No. 8 to No. 4 in Tuesday’s national coaches poll, clinched at least a share of the ACC regular-season title by knocking off then-No. 3 North Carolina State last Friday night.

“We can’t let that [win over State] affect us,” Tech coach Tony Robie said Wednesday in a phone interview. “It was an emotional evening. It was fun. But we’ve got to make sure we stay focused.

“Our guys understand what’s at stake, … but it’s always hard. … Sometimes you have a lull after a match like that.”

Be it in a tie or alone, Tech is assured of finishing atop the ACC standings for the first time in four years. It is no small accomplishment, considering that five of the ACC’s six teams are in the national coaches Top 25 poll.

The Hokies beat State 17-16 in a match that came down to the third tiebreaker, which was the total points each team earned during the night’s bouts. Tech finished with 49 points to State’s 48.

“I like the composure our guys had … and the toughness that we wrestled with,” Robie said.

Tech trailed 16-13 entering the final match, which was at 125 pounds. Down 4-3, Tech redshirt freshman Sam Latona recorded a takedown and a near fall of Jakob Camacho in the final seconds to win 7-4 and tie the team battle at 16.

“He’s got no quit in him,” Robie said of Latona. “There’s 420 seconds in a wrestling match — that’s what it took him to win. He wrestled hard every single second of that match. … It’s a message to the rest of the guys on our team that you can’t ever let up.”

Latona (7-0) was ranked No. 4 in his weight class Thursday in the NCAA Division I coaches’ inaugural rankings of the season.

Mekhi Lewis, the 2019 NCAA champ at 165 pounds, was ranked No. 1 in his weight class Thursday. He has won 27 straight matches, including eight this season.

Latona, Lewis and Myers were not in Tech’s lineup last season. Latona took a regular redshirt year, while Lewis took an Olympic redshirt year to train for the postponed Olympic trials. Myers missed last season with an injury.

Friday’s match will air on the ACC Network.

The Virginia Tech women’s lacrosse team, which is ranked No. 16 in the Inside Lacrosse preseason poll, will open the season Friday at Liberty.

“To just get to this moment is unbelievable,” coach John Sung said Wednesday. “This team has gone through so much, from having COVID happen, … the injuries that happened, a kid getting cancer.”

Sung returned to Tech on Wednesday after testing positive for COVID-19 and quarantining for 10 days.

He said assistant coaches Gregg Gebhard and Amanda Shimp also tested positive and will not be at Friday’s opener.

Tech got off to a 7-3 start last year before the season was cut short by the pandemic.

Kayla Frank, who tied for sixth nationally with 45 points as a freshman last year, is no longer with the Hokies. She has remained at Tech as a student, but Sung said he does not know if she will rejoin the team next season.

“She’s gone through some personal matters,” Sung said. “She needs some time away from the game.”

Paige Petty, who ranked third nationally with 38 goals last year, is back. She suffered a torn ACL in last year’s finale but will play Friday.

Also back is Mary Griffin, who underwent surgery last fall for a rare form of pancreatic cancer. The Tech medical staff has given her the green light to play limited minutes Friday.

“She’s been practicing,” Sung said. “The surgeons … feel very confident with the results [of the surgery]. … She didn’t need any of the chemotherapy or radiation.”

The NCAA Division I Council granted all Division I 2020 spring athletes another year of eligibility to make up for their shortened seasons, so four of Tech’s 2020 seniors came back.

One of them was Taylor Caskey, who was third on the team with 32 points last year. But she suffered a torn Achilles tendon in preseason practice, so she will spend the season as a graduate assistant.

The other 2020 seniors who returned were goalie Angie Benson and defenders Kendall Welch and Mary Clare McCarthy.

Caroline Allen, a former All-Ivy League pick who had 18 goals for Cornell as a senior last year, transferred to Tech for her extra year of eligibility.

The Virginia Tech softball team will open the season Saturday with a doubleheader at Kennesaw State.

Tech is ranked No. 15 in the USA Today preseason coaches poll — its highest preseason ranking in 13 years.

Virginia Tech has been picked second in the ACC’s preseason poll. Ace Keely Rochard made the preseason All-ACC team, as did outfielder Jayme Bailey and infielder Kelsey Bennett.

Opinion: Sean Payton's last season with the Saints was a success

Opinion: Sean Payton's last season with the Saints was a success

Virginia Tech redshirt freshman Sam Latona (top) recorded a takedown and a two-point near fall of Jakob Camacho in the final seconds to win 7-4 in the final match of the Hokies' 17-16 victory over North Carolina State last Friday.