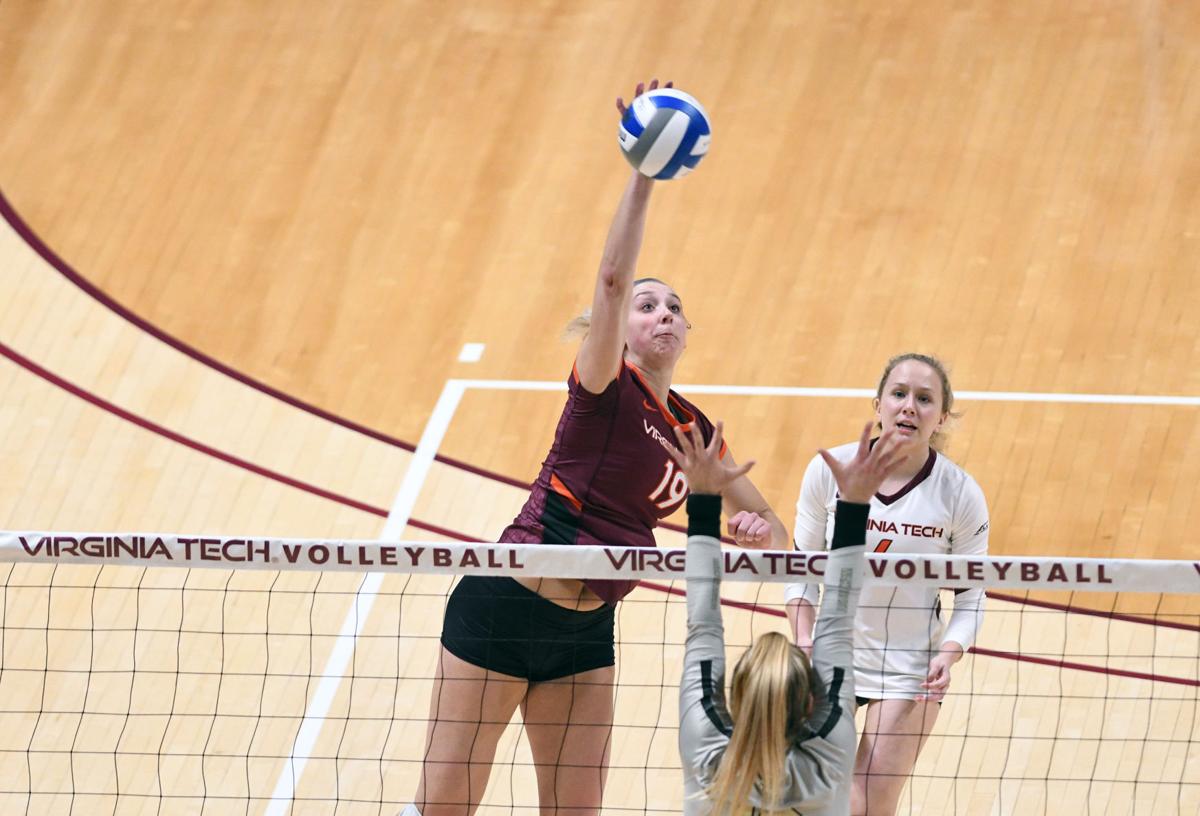 Virginia Tech volleyball player Marisa Cerchio (left) is one of six returning starters on the Hokies, who open the season Thursday against The Citadel. 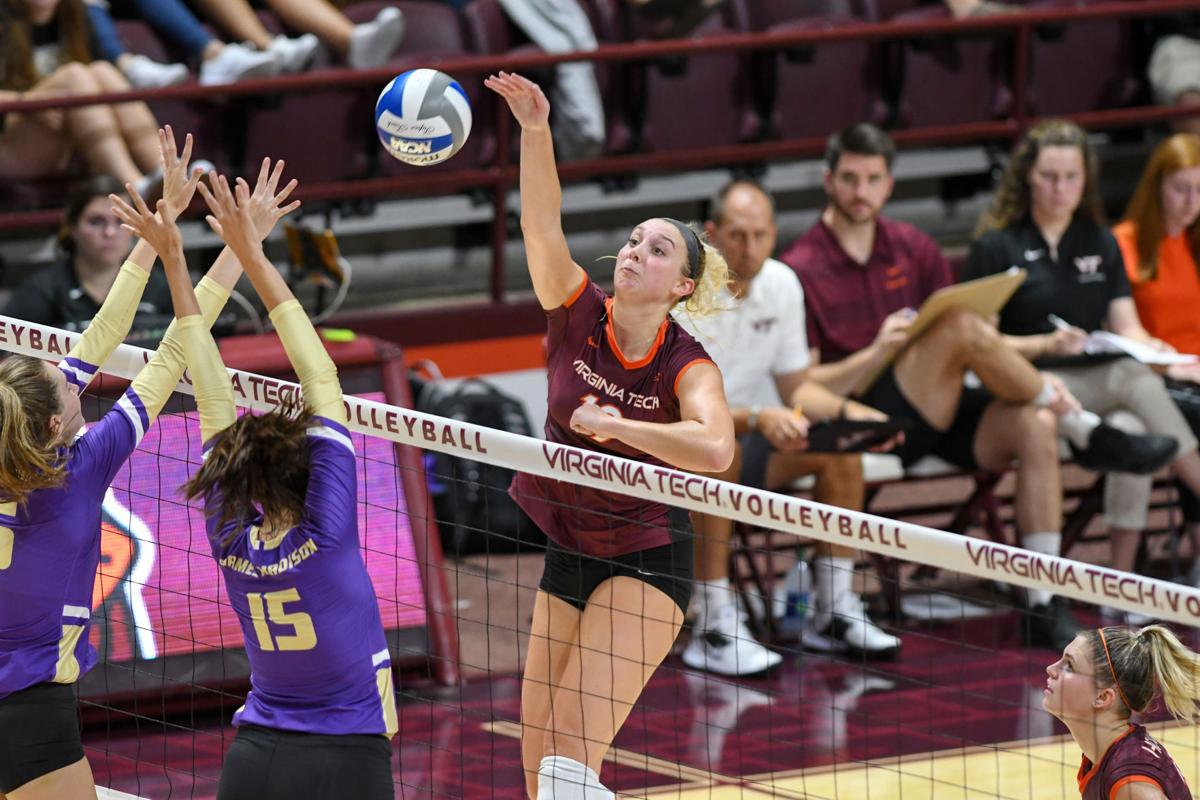 Virginia Tech senior Marisa Cerchio (center), shown in a 2019 match, had a team-high 312 kills last fall. The Hokies will open the season Thursday at home against The Citadel. 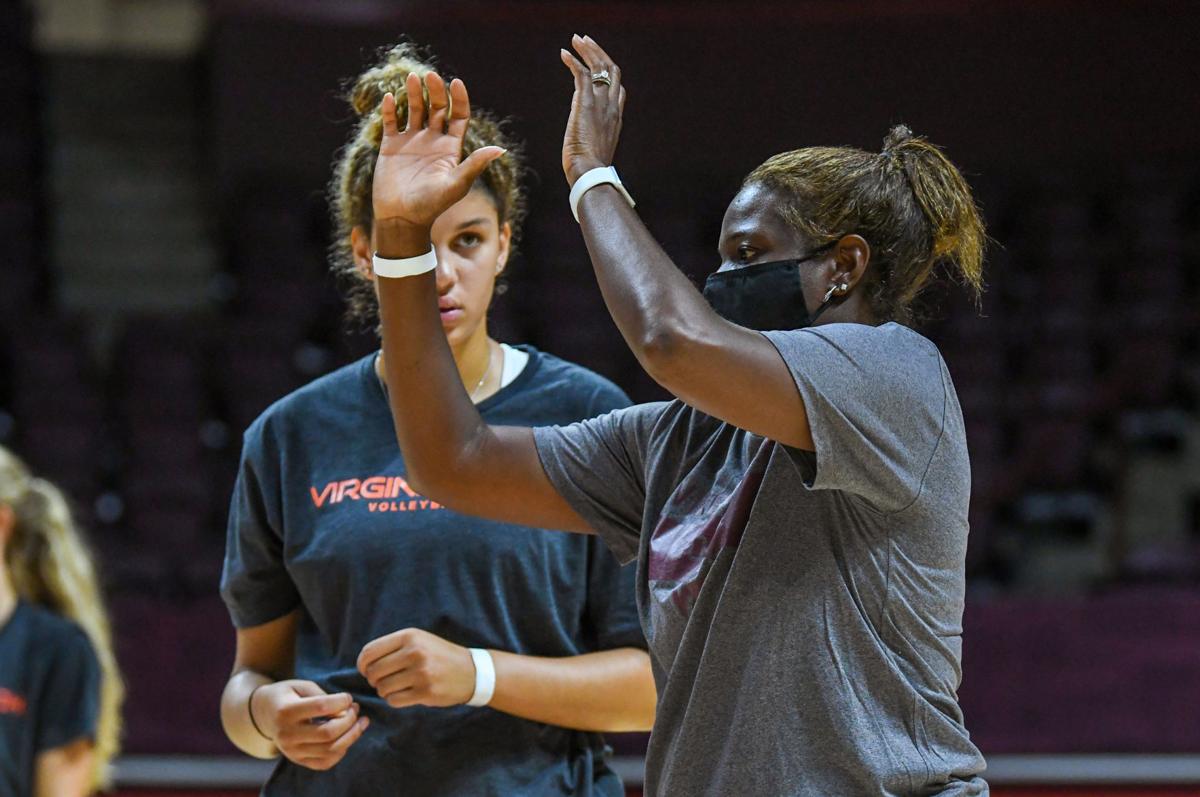 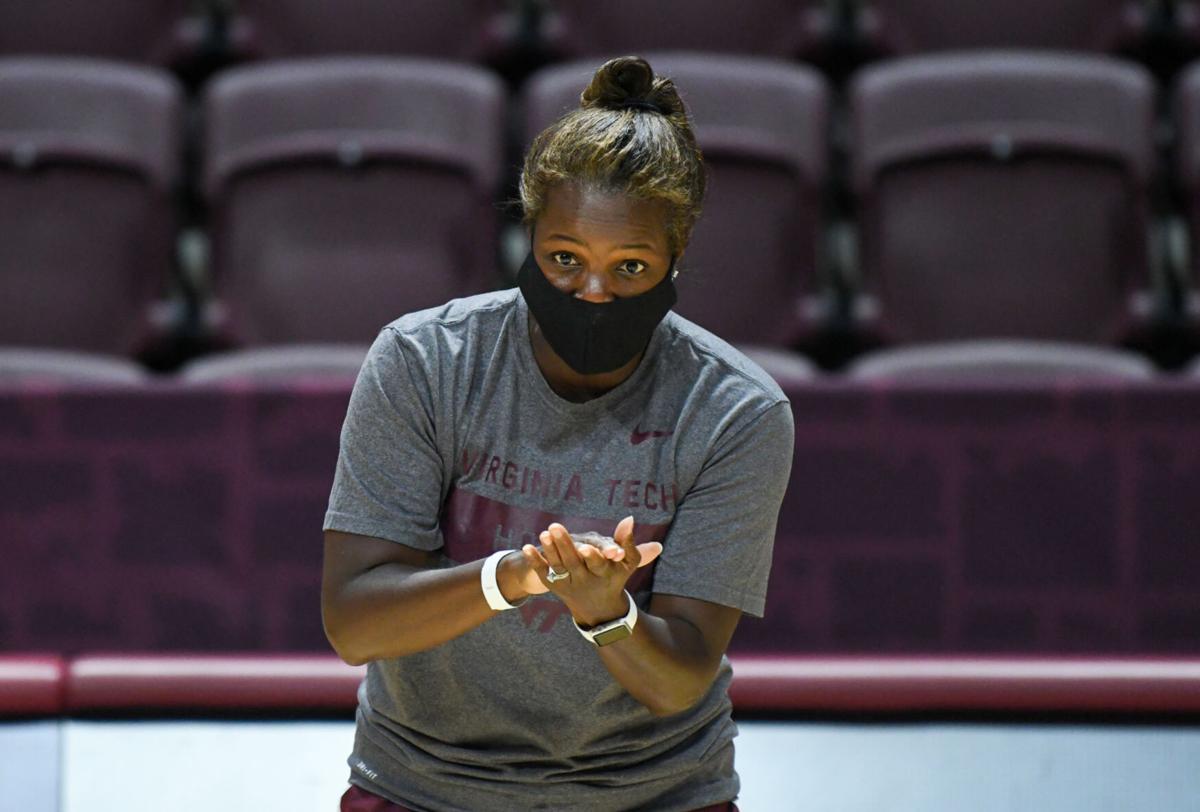 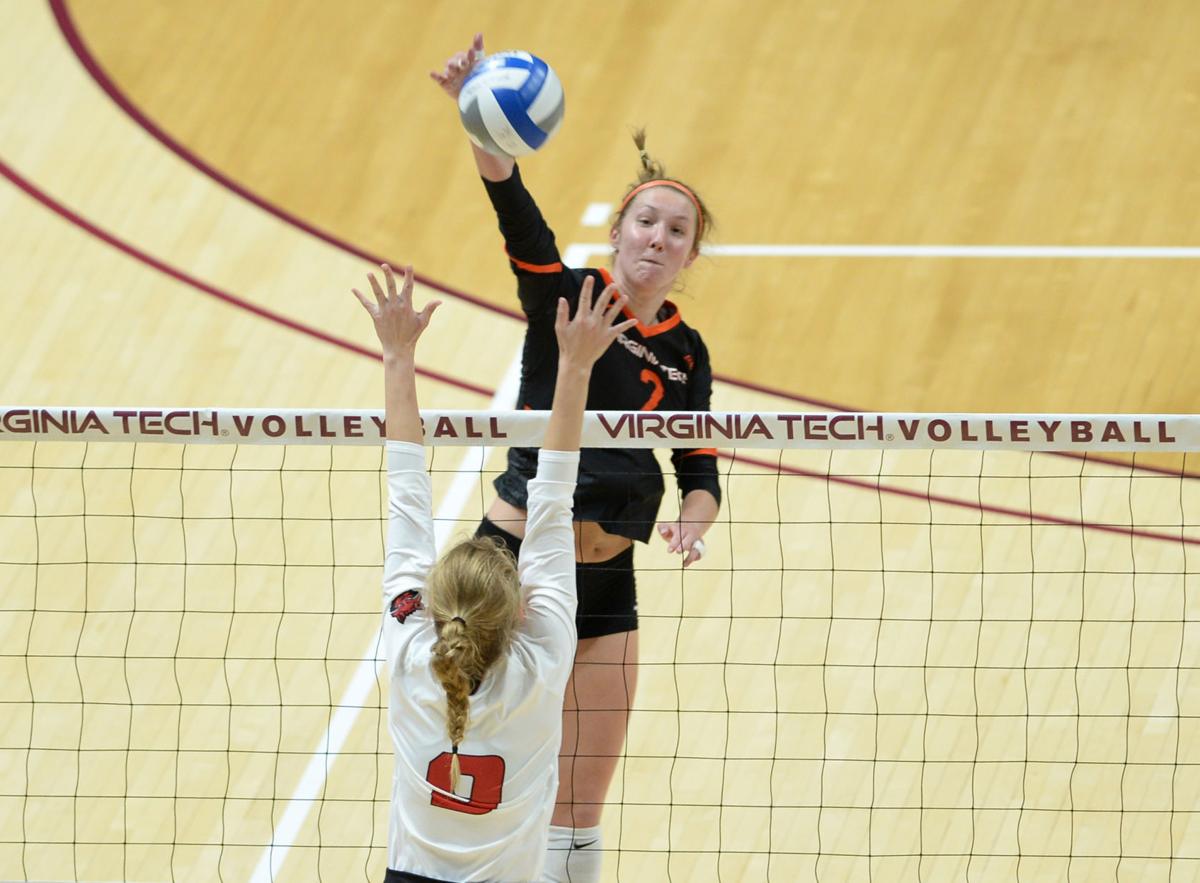 Virginia Tech volleyball player and Blacksburg High School graduate Anabel Zier, shown last year, is one of six returning starters. The team will open the season Thursday against The Citadel. 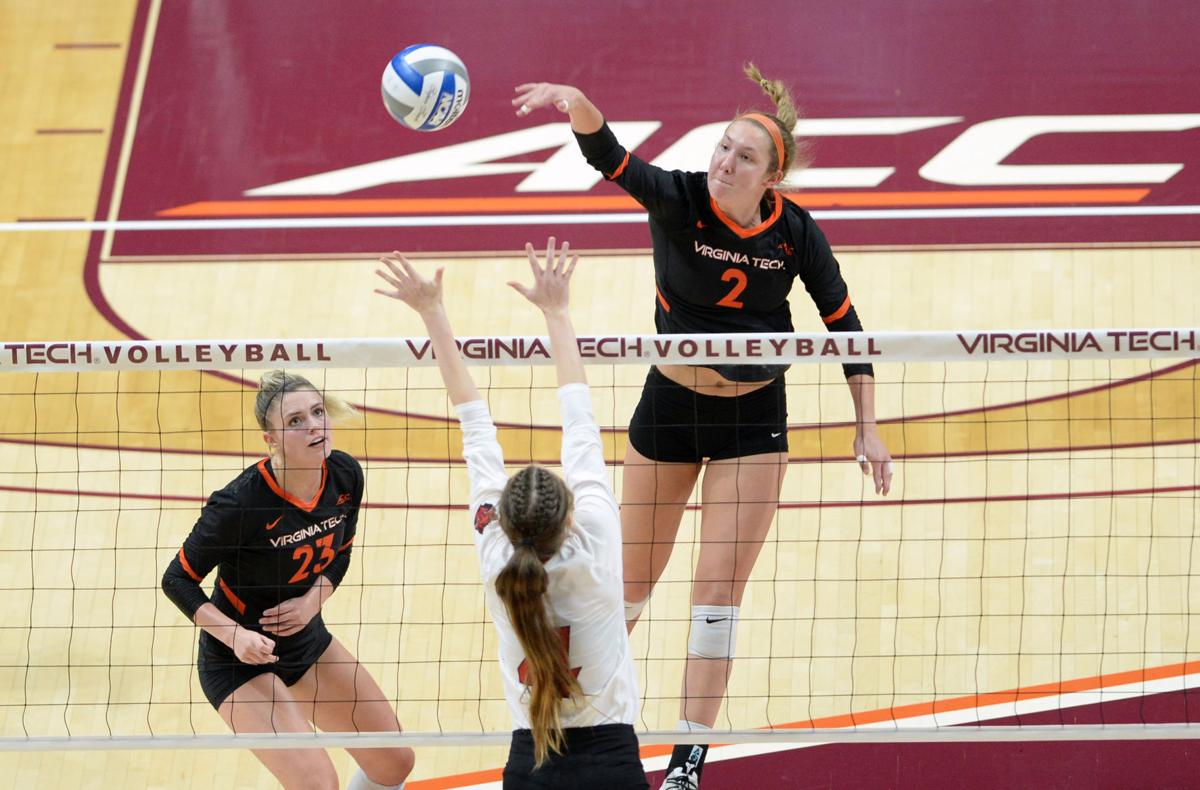 Even though there won’t be a Virginia Tech home football game Saturday, there will still be one sporting event on campus this week.

The Virginia Tech volleyball team, with new coach Marci Byers at the helm, will open the season Thursday against The Citadel at Cassell Coliseum.

It will be the first time Tech has hosted a sporting event since the coronavirus pandemic shut down the sports world in March.

“That is so crazy,” Tech senior Marisa Cerchio said Tuesday in a phone interview. “It took a lot of waiting, but we’re finally here. The entire team is super excited.”

The Tech women’s soccer team opened its season last weekend, but that game was in Charlottesville.

“Our entire team has gone this whole time having negative cases,” said Cerchio, who had a team-high 312 kills last fall. “We’ve all been taking it super seriously for each other because we don’t want to put the team at risk.

“We make sure we’re staying farther apart [in practice] so we’re not breathing down each other’s necks.

“I talked with our athletic trainer and she said that during a whole practice or a whole match, it shouldn’t add up to … even 15 minutes of being in less than 6 feet of other people, so I do feel very safe.”

The Tech football team was poised to open its season Saturday against visiting Virginia, but Tech announced last weekend it was postponing that game because of positive COVID-19 tests and quarantining on the football team.

“It definitely did come as a shock,” Cerchio said of the football news. “We all were pretty worried because we know that it is going around campus.

“When we did have to get our testing done, we all were a little bit worried, knowing that there were cases rising. But luckily, since they all came back negative and we all know that we’re staying extra safe and doing as much as we can, that does give us more comfort.

“Since our team [roster] is a lot smaller than the football team, it gives us a lot less people who could possibly get infected.”

Was the volleyball team given any advice in the wake of the football news?

“Not necessarily because of what happened to football, but we are encouraged to try and stay in little groups within our team or just stay within our team because we can’t know for sure what our friends outside the team are doing,” Cerchio said.

“Since we’ve been doing such a good job so far, they’re just encouraging that we keep up that behavior and keep ourselves distant from the rest of the population in Blacksburg as much as we can.”

Thursday’s 4 p.m. match will be the first Olympic sports event that the ACC Network has televised this fall.

Many conferences have postponed their fall season until the spring, prompting the NCAA Division I Council to move the NCAA volleyball tournament to the spring as well.

The Citadel (0-1) belongs to the Southern Conference, which moved its fall season to the spring but is permitting nonconference action this fall.

The Citadel was supposed to follow up the Tech match with a visit to Clemson on Friday, but Clemson announced Monday it was postponing that match and two men’s soccer games because of positive COVID-19 tests within both Clemson programs. The Citadel will visit UVa on Friday instead.

In addition to Thursday’s nonleague match, Tech will play eight ACC matches this fall. There could be ACC matches next spring as well.

“Getting our season cut short does kind of stink a little,” Cerchio said. “We’re definitely going to make the most of it and compete as hard as we can.”

Virginia Tech announced Wilson’s resignation on Jan. 21 — 10 days before Ohio State announced it had hired her as associate head coach.

Wilson, who had one year left on her letter of appointment, had a losing record in each of her three seasons at Tech.

“We were all very surprised,” Cerchio said of Wilson’s exit. “It was sad to see her go.”

“We all love Coach B,” Cerchio said. “We’re all learning new technique, … different things with our blocking patterns and how we read hitters and different ways that we approach and come off the net and different passing techniques.

“Being able to see ourselves progress from something old to something new … has been very eye-opening.”

Tech has not had a winning season since 2015.

“We definitely have to go through a little bit of a culture change to change our mentality to competing hard every single point,” Cerchio said.

Through a spokesman, Byers canceled an interview that was scheduled for Tuesday.

Neither the general public nor Tech students were allowed to attend the Hokies' home game against N.C. State.

When his hand cramped severely early in the second quarter, Virginia Tech quarterback Braxton Burmeister used an effective home remedy to finish out his team’s 45-24 victory over N.C. State.

Virginia Tech found out early Saturday morning the team would be without defensive coordinator Justin Hamilton in season opener, a look at how they handled shuffling the coaching staff on game day

BLACKSBURG — Virginia Tech kicks off the 2020 season at Lane Stadium on Saturday night against N.C. State.

BLACKSBURG — Virginia Tech freshman safety Keonta Jenkins had a plan when he arrived in Blacksburg alongside his fellow 2020 signees in early July.

Virginia Tech offensive lineman Brock Hoffman made a joyous return to the field … unless you were an N.C. State pass rusher trying to get by him.

Virginia Tech volleyball player Marisa Cerchio (left) is one of six returning starters on the Hokies, who open the season Thursday against The Citadel.

Virginia Tech senior Marisa Cerchio (center), shown in a 2019 match, had a team-high 312 kills last fall. The Hokies will open the season Thursday at home against The Citadel.

Virginia Tech volleyball player and Blacksburg High School graduate Anabel Zier, shown last year, is one of six returning starters. The team will open the season Thursday against The Citadel.