The coaching carousel in college football has been hyperactive for more than one month now. Fourteen programs have announced coaching changes at the FBS level before Thanksgiving, and there are expected to be more once the regular season concludes this weekend.

Hugh Freeze’s name has been floated around as a possibility for several openings, including Florida and LSU in the SEC and Virginia Tech in the ACC, despite the Liberty football coach indicating he remained happy in his current position.

He reiterated that point several times in 2020 when his name frequently popped up for openings, and stressed it again during the Flames’ open week earlier this month that his family’s quality of life had never been better since he took the job in Lynchburg.

“I’ve said it before and I’ll say it again and hopefully people will listen to it,” Freeze said Wednesday, “when you have as good a job as I have with as good of people as I have it here on the mountain, and the vision and the commitment level that they continue to show and believe in us, it can’t be that many better jobs than this one.”

Freeze made that abundantly clear when he and Liberty finalized the terms of a seven-year contract that will extend his time with the Flames to 2028 and make him one of the highest-paid non-Power Five coaches in the country.

“Coaching stability is especially essential in a program like ours that’s in the early stages of playing at the FBS level,” athletic director Ian McCaw said in a phone interview. “Obviously, Coach Freeze is an outstanding leader for our program and has us on a great trajectory and we want to continue the momentum forward.”

Financial details of the contract extension were not released. Multiple reports and sources confirmed the deal will pay Freeze an average of more than $4 million per season.

The seven-year deal replaces the final five years of the extension he signed one year ago. Freeze said McCaw approached him “three, four weeks ago” regarding the latest contract extension. That is when openings, especially at Power Five schools, started becoming available.

“What we’re seeing nationally is a trend to longer-term contracts. You’re starting to see some contracts beyond the traditional five years,” McCaw said. “I think that certainly speaks to the commitment we’re making to Coach Freeze and his staff.”

The deal ensures Freeze will lead the Flames from the FBS independent ranks into Conference USA. C-USA officially announced on Nov. 5 that Liberty, New Mexico State, Jacksonville State and Sam Houston State will join the league starting with the 2023-24 season.

“What we’ve done here in three years, gaining bowl eligibility, winning and being 2-0 in bowls, obviously ranked in the top 20 last year, and being competitive in almost every game we’ve played in, I think it made Liberty’s program here somewhat relevant,” Freeze said. “Now, transitioning after next year into Conference USA, I think it just set us up now to be competitive to win a conference championship.”

According to USA Today’s college football coaches salary database, Middle Tennessee’s Rick Stockstill would be the second-highest paid coach in the league behind Freeze.

“We’re excited that he will lead us into our transition to Conference USA,” McCaw said. “That’s exciting for us. With the anticipated expansion of the [College Football Playoff], we want to be in a position to compete for a conference championship and in turn a CFP berth.”

Freeze will make more than five current coaches in the Southeastern Conference, a league he previously coached in at Ole Miss, and the new pact will make Freeze one of the highest paid non-Power Five coaches in the nation.

Former Virginia Tech coach Justin Fuente was the highest-paid coach in the commonwealth prior to mutually parting ways with the Hokies on Nov. 16. His most recent salary figure for the 2020 season was $4.25 million.

“Truthfully, I don't know that it’s all deserved, but just really grateful for the confidence that they have in myself and our staff,” Freeze said. “Jill [Freeze’s wife] and I just rejoiced last night that God has been faithful and good, and the people of Liberty have been incredible to us.”

Freeze is 25-10 in his nearly three full seasons at Liberty. The Flames close the 2021 regular season Saturday when Army visits Williams Stadium at noon (ESPN+).

Freeze has led the Flames to two Cure Bowl victories over Georgia Southern (2019) and Coastal Carolina (2020), and he has the Flames bowl eligible this season with a 7-4 record.

His first extension, signed prior to the 2019 Cure Bowl, replaced the final four years of his original five-year contract and added one additional season through 2024.

The second extension added two years to the 2019 extension and placed him among the top five highest-paid Group of Five coaches with a “substantial” buyout.

“The coaching market is very hot right now with a lot of really attractive jobs open,” McCaw said. “It’s great to be in a position where we’ve secured Coach Freeze with a long-term agreement. Obviously when you go 25-10 in the three years transitioning to FBS, that’s a great statement of what he’s accomplished at Liberty.”

Hugh Freeze sensed something different during the week of practice leading up to Saturday’s matchup with No. 22 Louisiana at Williams Stadium.

Northwestern neutralized the nation’s most explosive offense. Then the Wildcats made sure two third-quarter goals stood up to secure the program’s first national championship.

Hugh Freeze wasn’t happy with the way the Liberty football team performed Saturday night against No. 22 Louisiana, and he certainly let his gr…

No. 22 Louisiana capitalizes on turnovers and sacks to take down Liberty

Louisiana snatched away Liberty's momentum with a lengthy scoring drive and then firmly secured it by gobbling up turnovers that sealed a 42-14 victory.

Breaking down Liberty's home game against No. 22 Louisiana

Liberty was accustomed to welcoming teams ranked in the Top 25 during its time in the Football Championship Subdivision. It was customary for …

Charlotte Vaanhold could barely breathe as she laid beneath her swarming teammates. The near-frozen turf of Phyllis Ocker Field Hockey Field d…

For the first time in nearly two years, the Liberty women’s basketball team walked off its home court with a loss.

A lopsided Saturday certainly turned this ballot for the Associated Press Top 25 poll on its head. 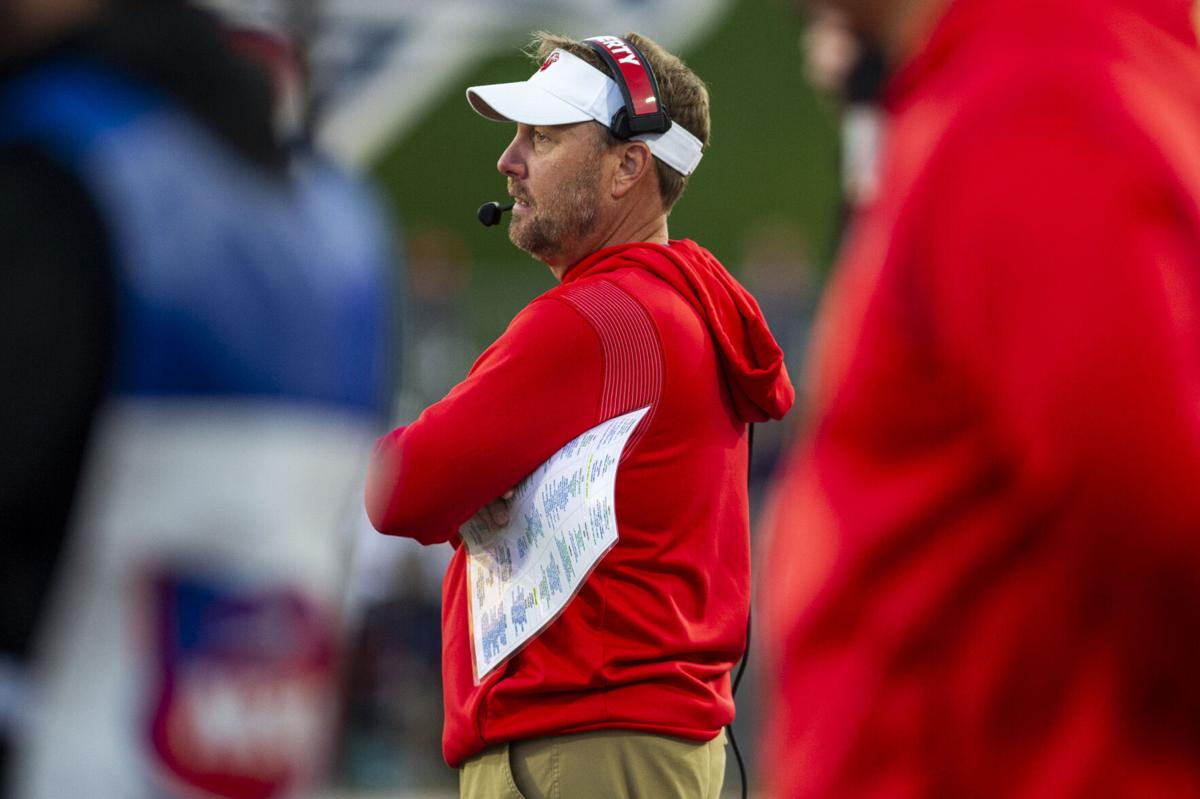 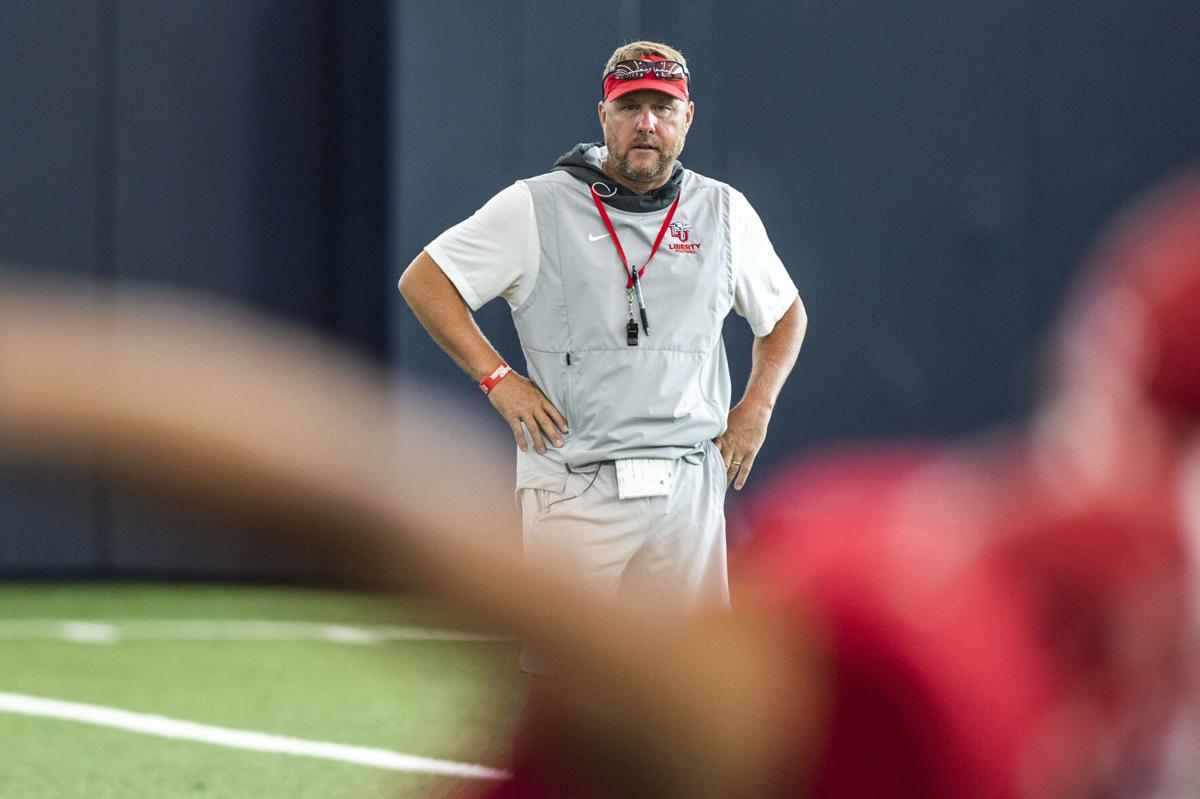