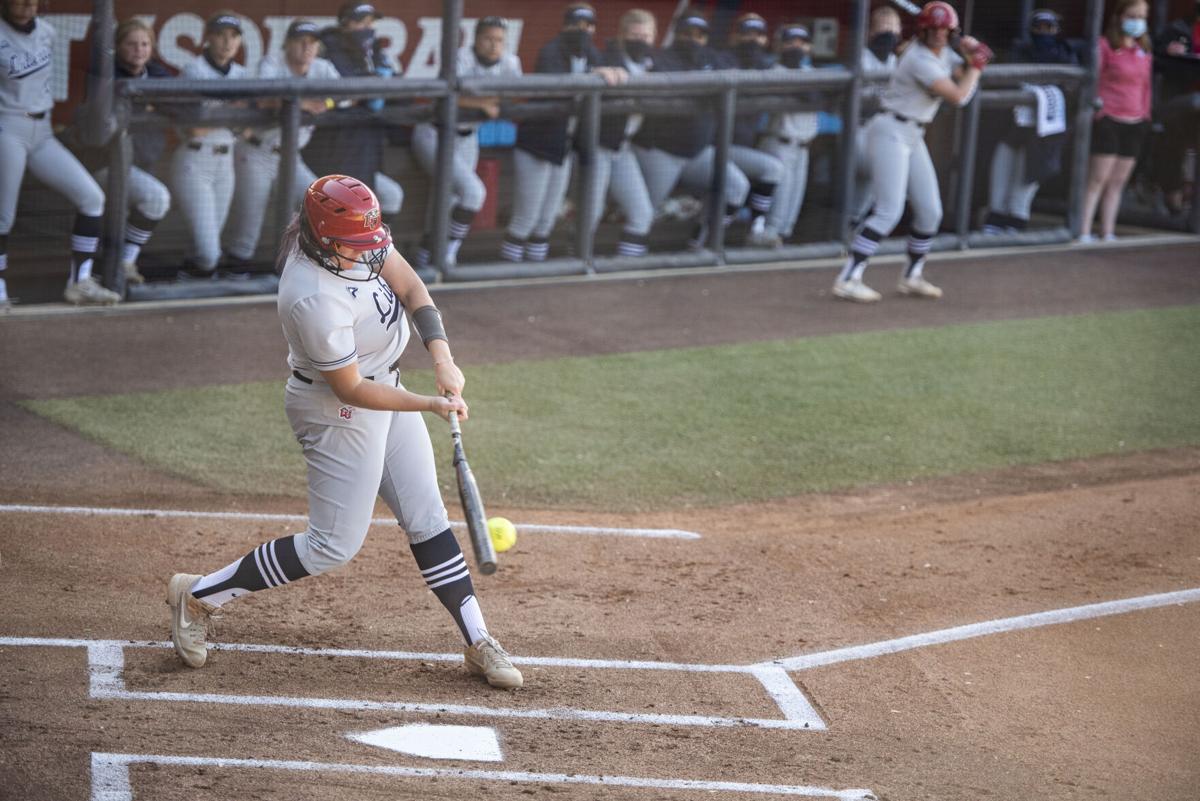 Liberty infielder Amber Bishop-Riley hits during a game against Virginia at Liberty University on April 21. 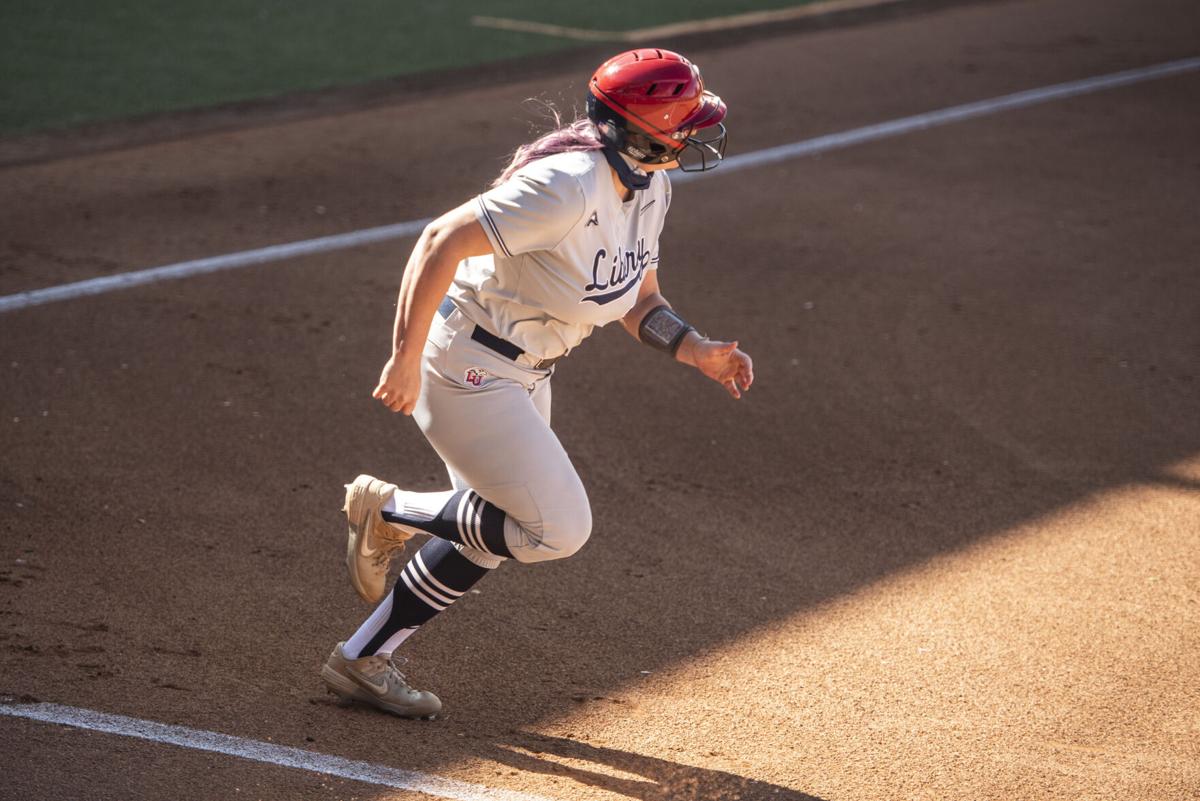 Liberty infielder Amber Bishop-Riley runs to first base during a game April 21 against Virginia at Liberty. 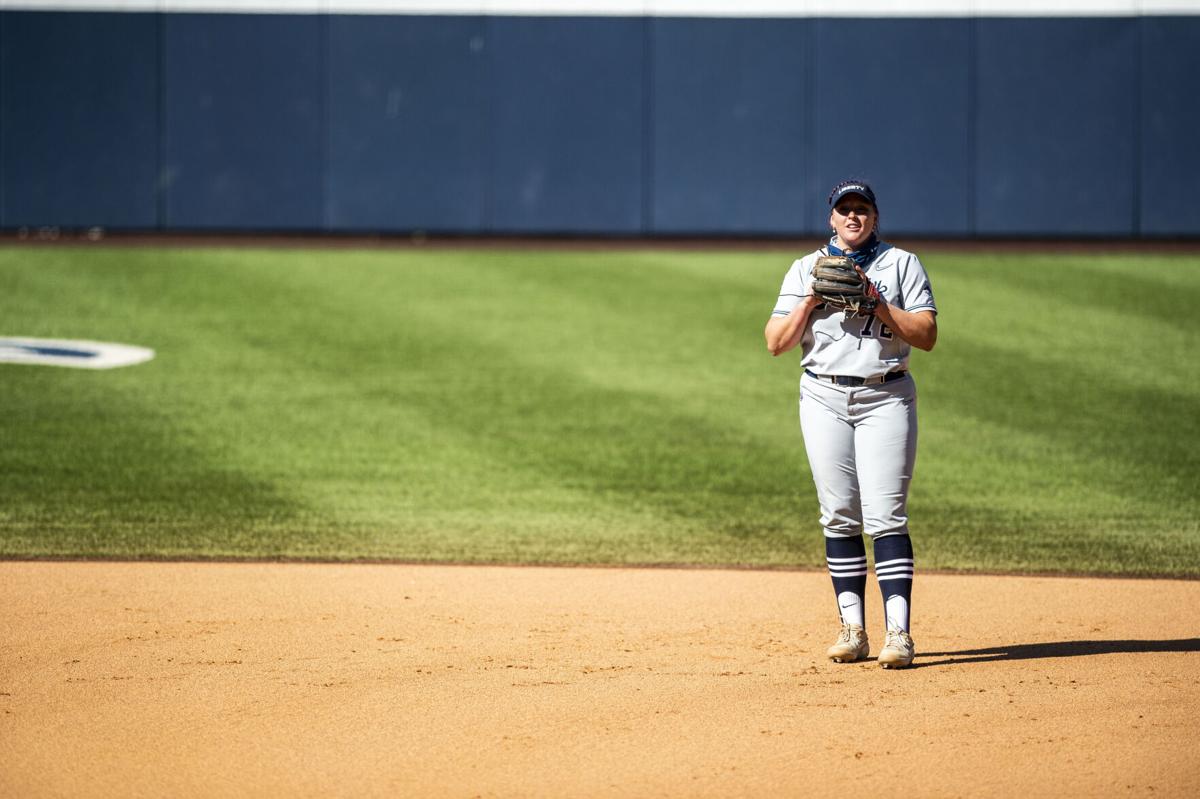 Liberty second baseman Amber Bishop-Riley waits for the play to begin Wednesday against Virginia at Liberty.

Inside pitches were being crushed over the right-field wall. Anything thrown outside or tailing away was being sent for extra bases into the awaiting gap in left-center field. Amber Bishop was in a zone as the 2020 softball season roared into March.

The Liberty second baseman was making the necessary adjustments at the plate and the results were nearly instantaneous. Not only were her power numbers steadily improving, but she was getting on base at a high clip and seeing pitches better from the right-handed batter’s box. Her goal of breaking Liberty’s all-time home run record was actually in sight.

The came March 13, 2020, when the coronavirus pandemic abruptly ended her season.

Those thoughts of rewriting the record books were momentarily replaced with the plea of the NCAA granting an additional year of eligibility for those seniors who were denied the chance to finish their seasons.

“When COVID first happened, I was like, ‘Oh gosh, I hope they give us a chance to decide to come back or not,’” she said recently. “When they did, my husband now [Dakota Riley], we talked about coming back, starting my master’s, and being able to play. It was a pretty easy decision at that.”

Bishop-Riley never hesitated in returning to Liberty for her super senior season, and she has rewritten several pages in the Liberty record book. Plus, she also set a first in NCAA history.

The second baseman’s return has sparked Liberty in its run to return to a regional for the first time since 2018 when she was a sophomore. The Flames (33-12) close their home schedule at 6 p.m. Wednesday against Virginia Tech (28-11) at Liberty Softball Stadium.

The Hokies are ranked 18th by Softball America, 19th by ESPN/USA Softball, and 20th in the National Fastpitch Coaches Association and D1Softball.com polls.

“She’s just a blessing to be able to coach,” Flames coach Dot Richardson said of Bishop-Riley.

Bishop-Riley’s goal of breaking Jessica Moore’s program record of 58 homers had to wait until the 2021 season, and she did so on her 10th homer of the season April 2 in the second game of a doubleheader against Kennesaw State in Lynchburg.

That 10th homer gave her five seasons with double-digit long balls, and she became the first player in NCAA history to accomplish the feat.

“I couldn’t have imagined it. I didn’t even know about the NCAA record until I was maybe four home runs in this year,” she admitted. “I wasn’t too worried about that. I didn’t want to put a ton of pressure on myself to break the home run record at Liberty, but it also was a huge goal in the back of my head. I was like, ‘I’m so close. I would love to get that.’”

“I just hope that she doesn’t feel that she has to have all that pressure to hit home runs because it’s amazing when she is on and just swings as normal as possible how much has happened,” Richardson said. “She doesn’t really have to try too hard and it happens.”

Her next run scored will be her 192nd and will break a tie with Moore for the most in program history.

“She’s such a great athlete,” Richardson said. “ … That’s the competitor in her. She doesn’t shy away from that.”

The hitting has always been a staple of her game. Her fielding has taken a step forward this season.

She boasts a sterling .984 fielding percentage with only two errors this season. She has made several over-the-shoulder catches in shallow right field, and her highlight-reel play behind the bag at second base to record a fielder’s choice in the eighth inning against Arkansas on March 16 allowed the Flames to upset the No. 17 Razorbacks in 10 innings.

“I’m extremely excited to see how I can continue to grow this year in my defense,” Bishop-Riley said. “I try to separate my hitting and my defense. If I’m not doing one thing well, like hitting, I don’t want to take it into my defense and just all around have a bad game. I definitely am happy that I’m able to grow in that way and stuff. Hopefully I can continue in that thought process for sure.”

The Flames have a big series with Kennesaw State this weekend before closing the regular season at Virginia Tech on May 5. If Liberty can take two of three from the Owls, it will secure the ASUN Conference North Division No. 1 seed for the upcoming league tournament.

Bishop-Riley has her sights set on advancing to a regional for the second time at Liberty, and she hopes the Flames can finally clear the hurdle and make it to a super regional for the first time in program history.

“I would be so excited if we can get back to another regional just because the talent that we have on this team right now, we could go really far, and maybe this time win the regional and get on to the next part of the game,” she said. “The motivation from losing in the regional in my sophomore year has definitely grown and I know this team is really wanting that as well. Hopefully we can do that this year.”

Breana Burke wildly jumped up and down just inside the pitching circle. Her Lipscomb teammates charged from the dugout and joined in on the ce…

“It’s a really exciting time,” Nicaise Muamba said Monday after the selection show. “The first time was really exciting, but now I get to share that with the whole team. That’s really much more special.”

Liberty kept getting runners on base against Breana Burke, but the Lipscomb starting pitcher found ways to escape jams and prevent the Flames …

Forward Bryson Spell officially signed his National Letter of Intent on Thursday and is the fourth and final member of Liberty's 2021 recruiting class that includes guards Brody Peebles, Joseph Venzant and DJ Moore.

Liberty, compared to the three at-large selections Iowa, Louisville and Northwestern, held the advantage in most every metric. The Flames ranked second in RPI, had the fourth toughest strength of schedule, and ranked fourth in average computer ranking.

Hudson sent the game into extra innings with a three-run home run in the seventh inning, and she delivered again with a two-run, walk-off homer in the ninth as Liberty’s offense woke up late in a dramatic 5-3 victory over Virginia Tech at Liberty Softball Stadium.

Liberty (7-5-5) faces off against Washington (9-3-3) in the first round scheduled for 7 p.m. Tuesday at the Sportsplex in Matthews, North Carolina.

It took Allie Schwab and Hanna Bishop 15 minutes to get into an offensive rhythm Friday night.

Despite appearing overmatched through five innings, the Virginia baseball team scored runs in the sixth, seventh and eighth innings to complete a come-from-behind 6-5 win over Liberty.

Liberty infielder Amber Bishop-Riley hits during a game against Virginia at Liberty University on April 21.

Liberty infielder Amber Bishop-Riley runs to first base during a game April 21 against Virginia at Liberty.

Liberty second baseman Amber Bishop-Riley waits for the play to begin Wednesday against Virginia at Liberty.