One dead in Campbell County crash 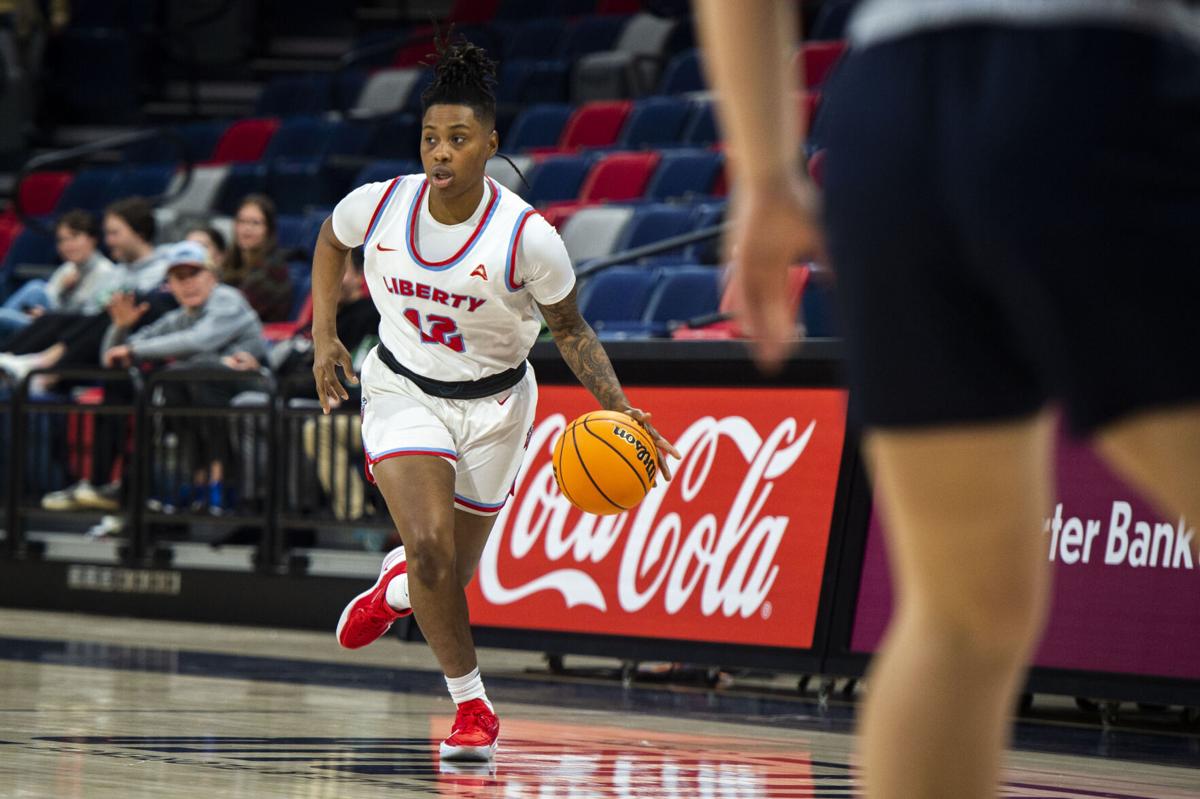 Liberty guard Dee Brown brings the ball up the court during a game against North Florida in Liberty Arena on Wednesday. Brown, along with Priscilla Smeenge, has helped lead a Flames defense that ranks fifth in the nation in scoring defense and third in field-goal defense. 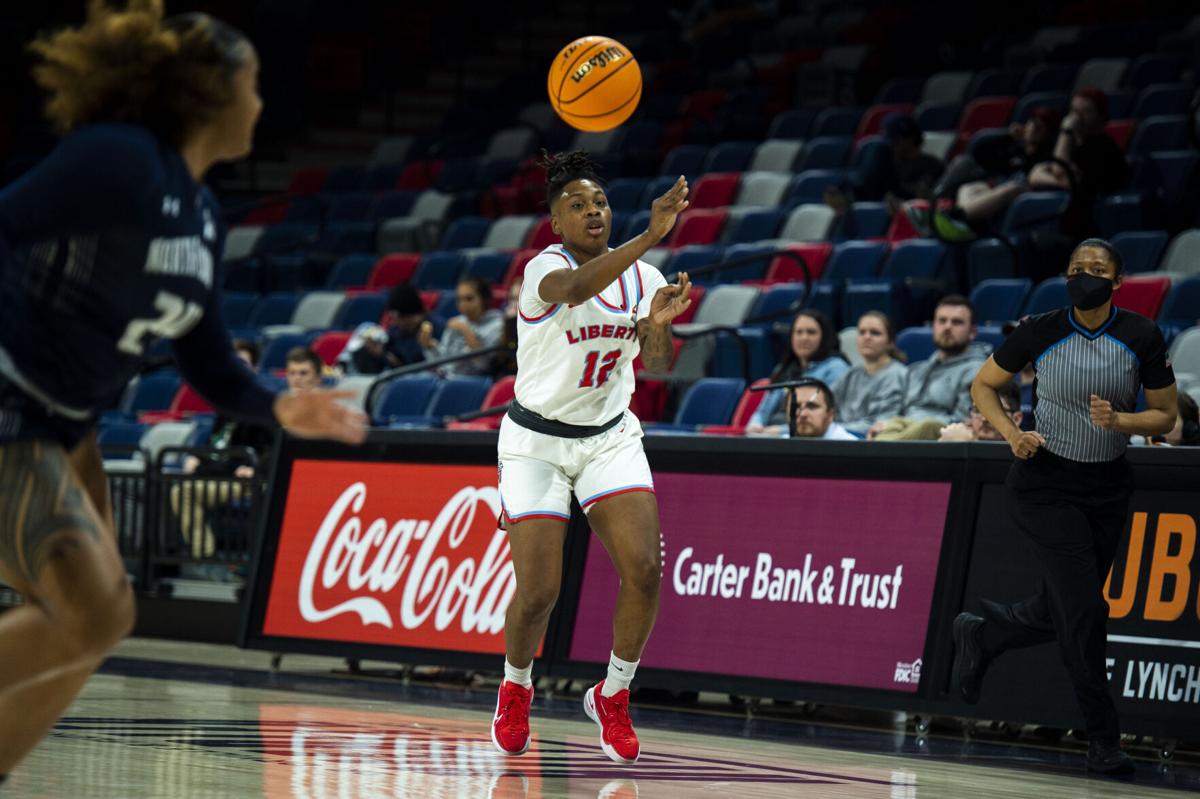 Liberty guard Dee Brown passes the ball during a game against North Florida in Liberty Arena on Wednesday. 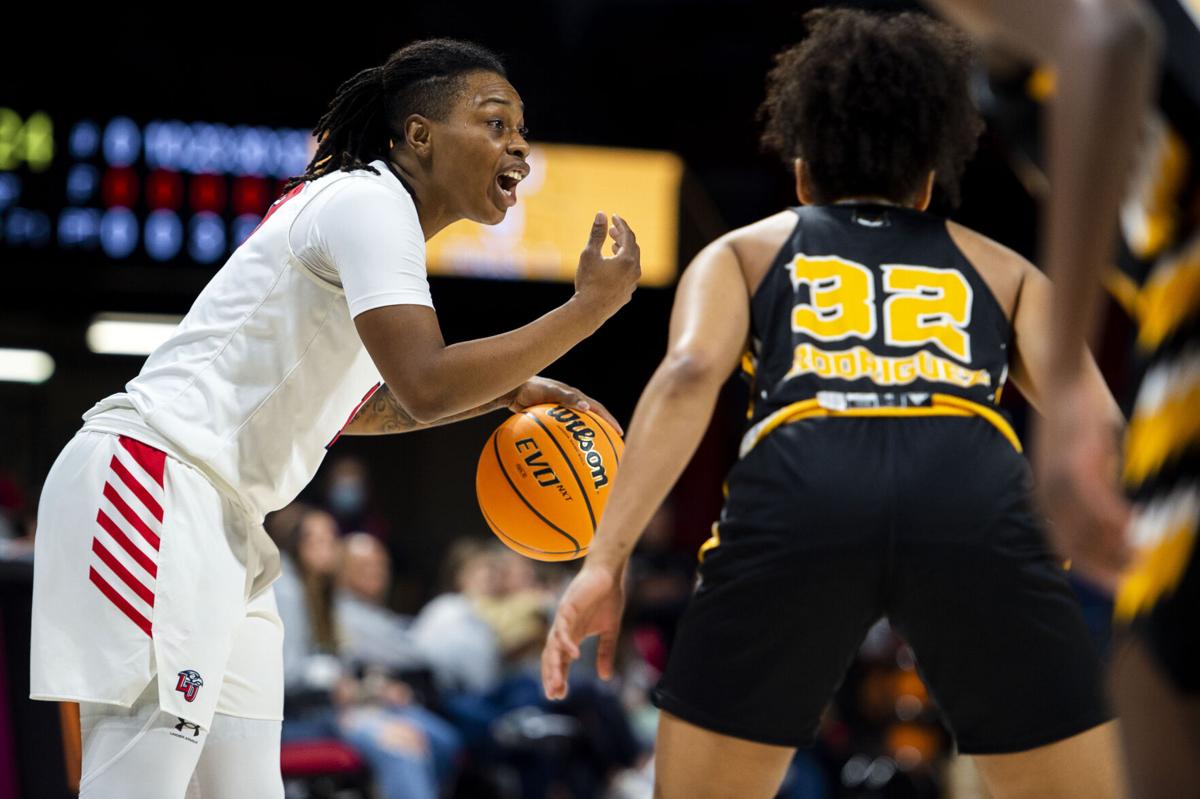 Liberty guard Dee Brown calls the shots during a game against Kennesaw State at Liberty Arena on Saturday, Jan. 8, 2022. 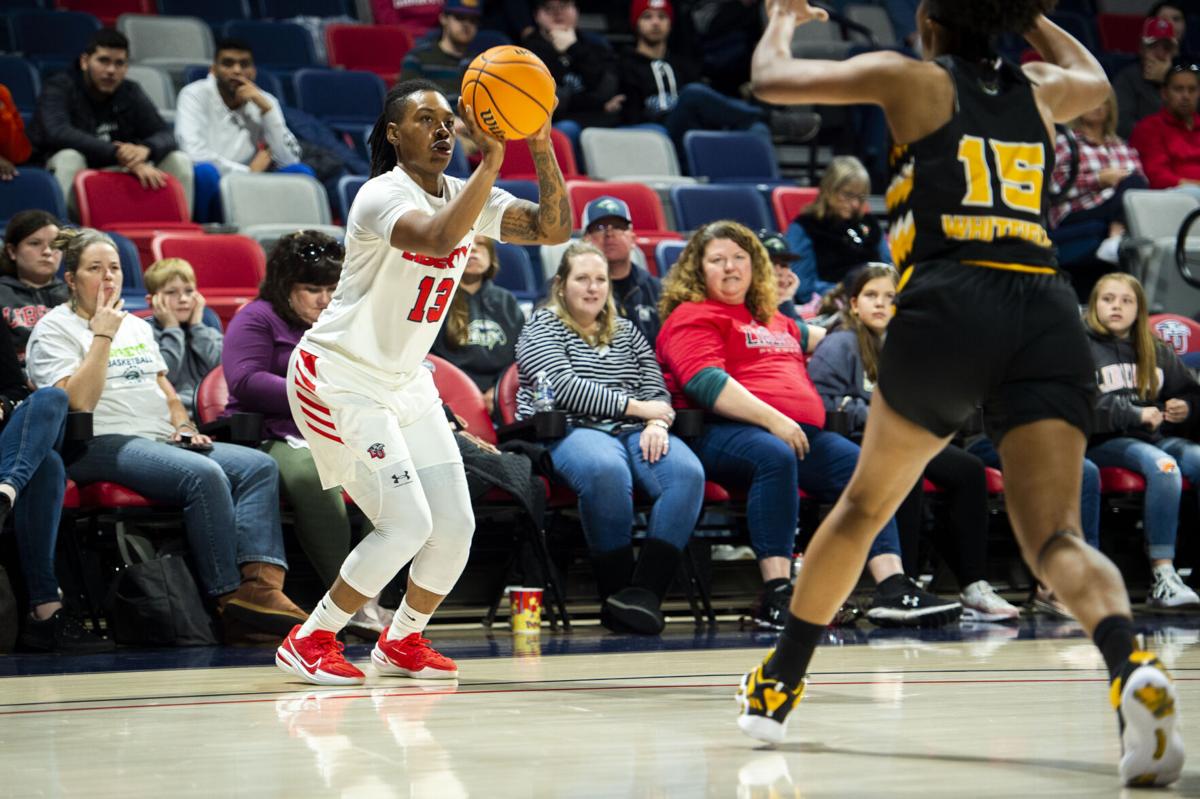 Liberty guard Dee Brown goes up for a shot during a game against Kennesaw State at Liberty Arena on Saturday, Jan. 8, 2022. 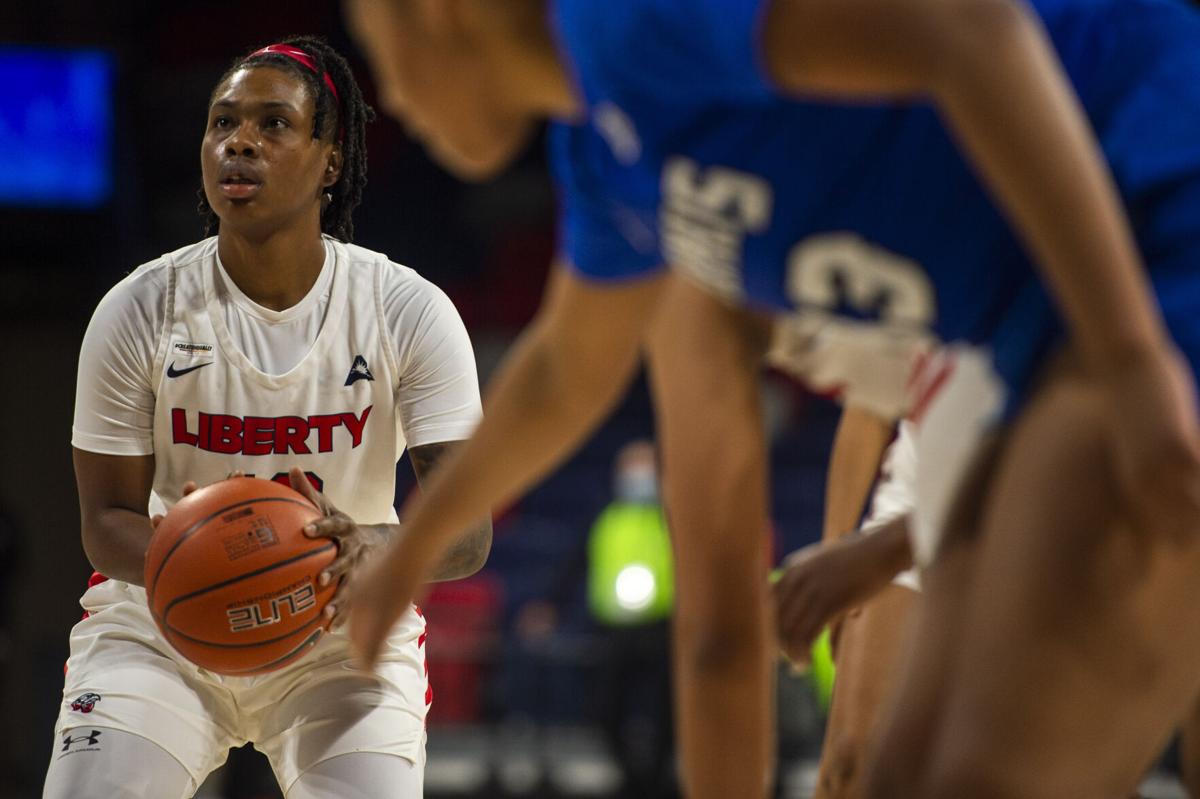 Brown takes a free throw during a game against Memphis on Nov. 23, 2021, at Liberty Arena. Brown and Liberty’s defense will face their toughest test so far this season when they face FGCU and reigning ASUN player of the year Kierstan Bell.

Dee Brown entered a phase of her game Wednesday against North Florida that Liberty women’s basketball coach Carey Green described as “beast mode." The Flames guard did everything she could to not be denied on the offensive end, and her ability to get into the scoring column allowed the Flames to pull away for a win over the Ospreys.

Scoring hasn’t defined Brown this season or her ability to help Liberty continue to rack up win after win. Green fondly calls her “Captain Grit” for her style of play, which features her diving on the floor for loose balls, taking charges and playing tenacious perimeter defense.

That's the only way Brown knows how to play when she laces up her sneakers and steps onto the hardwood. It was ingrained in her growing up in Chicago with five brothers who never took it easy on her.

“I always had to prove myself and stand my ground all day, every day,” she said. “It was some type of fight, some type of roughhousing, so it definitely came from having brothers.”

Brown’s gritty play, especially on defense, has helped Liberty open the season with the program’s best start since the 1997-98 campaign. The Flames’ strong start will be challenged at 4 p.m. Saturday when they face Florida Gulf Coast — which is ranked 23rd in the latest coaches Top 25 poll — inside Alico Arena in Fort Myers, Florida.

The game is the first of a doubleheader, with the two men’s programs meeting at 7 p.m.

“She’s probably the leader in the grit category, Captain Grit,” Green said of Brown. “She has definitely set a tone for her teammates and has really helped make our team who they are this year. … We love to have her energy.”

Brown, along with Priscilla Smeenge, have solidified the Flames’ perimeter defense. The two give Liberty (15-1, 3-0 ASUN Conference) bigger bodied wings who can physically match up with other guards while having the lateral quickness to deny driving lanes into the paint.

The Liberty defense has been one of the best in the nation this season. The Flames rank fifth in the nation in scoring defense (49.1 points allowed), fourth in rebounding margin (plus-13.2) and are third in field-goal defense (opponents are shooting 32.4% against them).

“She’s no doubt a lot of the spirit of the team,” Green said of Brown.

Green’s bunch will face its toughest test of the season against FGCU (14-1, 3-0), which is first in receiving votes in the Associated Press Top 25 poll and boasts reigning ASUN player of the year Kierstian Bell.

Brown’s grittiness will be needed against the high-octane Eagles.

She developed that style of play on the streets of Chicago. Outside of having five brothers making sure nothing ever came easy for her, Brown finally picked up a basketball in the fifth grade and was immediately met with a challenge. Many kids in Chicago begin playing basketball in kindergarten, so Brown described herself as a “late bloomer” in the sport.

Those same kids who played for years before Brown joined the fray gave her a hard time for not being able to shoot or perform at their level.

She said she didn’t develop a left-handed layup until the seventh grade, and there were instances in which she wanted to give up because that’s what those more developed in their game wanted Brown to do.

“Instead of letting me quit like I wanted to so bad, my dad wouldn’t let me,” she said of her father, Derrek Brown. “He made me push it through and see it through.

“I’m grateful and blessed that he made me do that because I wouldn’t be where I am if he didn’t do that. Definitely having brothers and facing adversity when I was younger, it’s all a blessing. A blessing in disguise.”

Brown decided she would do whatever it took to make it in basketball, and that work ethic was rewarded over the years. She graduated from Proviso East High School outside of Chicago as a McDonald’s All-American nominee and a first-team all-state selection from the Chicago Tribune.

She attended Miami Dade College for two seasons and was a two-time National Junior College Athletic Association All-American. She led all NJCAA Division I players in scoring at 26.6 points per game as a sophomore (2019-20 season) and ranked second with 7.3 assists per game.

Brown, a redshirt junior, hasn’t needed to score in her two seasons at Liberty. She's averaging 6.7 points and 5.5 rebounds per game this season.

“I can always score the ball. I’m not shying away from the ball, I can score, but when you’ve got four other players on the court who can score, there’s no need to be selfish,” Brown said. “Whoever has the hot hand, keep giving it to them, and let them play it out.”

The 5-foot-9 Brown has emerged as a leader on this season’s Liberty team. Super senior Bridgette Rettstatt serves as the captain and unquestioned leading voice in the locker room, but the players respect Brown’s play and when she speaks up.

“She’s meant to be a leader,” Williams said. “ … Everybody needs somebody on the team that, hey, this person is doing this, the next person is going to have to step up and be right there with them. It inspires your teammates to push each other every day like, hey, you’ve got to get on the floor, too. We’re sisters, we’re a family, we’ve got to do it for each other.”

Liberty is constantly working to reduce its future football schedules in advance of moving to Conference USA in 2023.

Liberty guard Dee Brown brings the ball up the court during a game against North Florida in Liberty Arena on Wednesday. Brown, along with Priscilla Smeenge, has helped lead a Flames defense that ranks fifth in the nation in scoring defense and third in field-goal defense.

Liberty guard Dee Brown passes the ball during a game against North Florida in Liberty Arena on Wednesday.

Liberty guard Dee Brown calls the shots during a game against Kennesaw State at Liberty Arena on Saturday, Jan. 8, 2022.

Liberty guard Dee Brown goes up for a shot during a game against Kennesaw State at Liberty Arena on Saturday, Jan. 8, 2022.

Brown takes a free throw during a game against Memphis on Nov. 23, 2021, at Liberty Arena. Brown and Liberty’s defense will face their toughest test so far this season when they face FGCU and reigning ASUN player of the year Kierstan Bell.