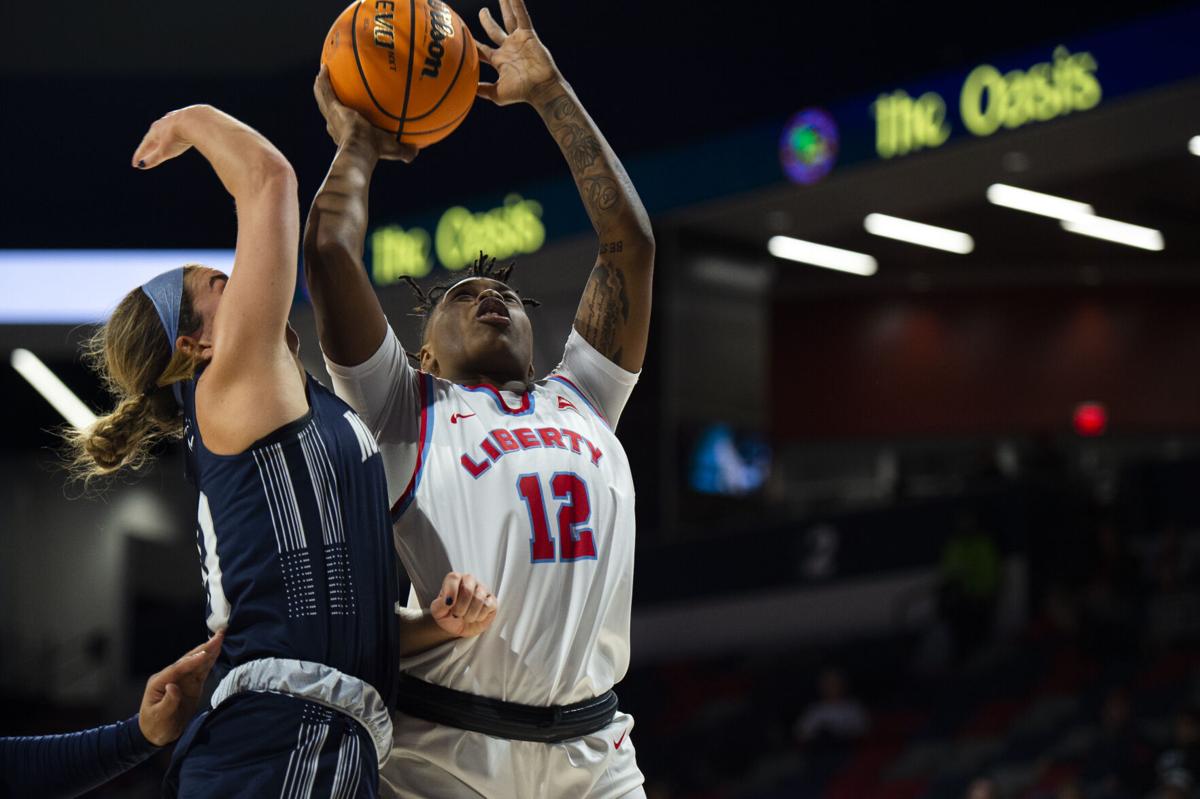 Liberty guard Dee Brown goes up for a shot against North Florida at Liberty Arena on Wednesday. Brown finished with a double-double in the victory. 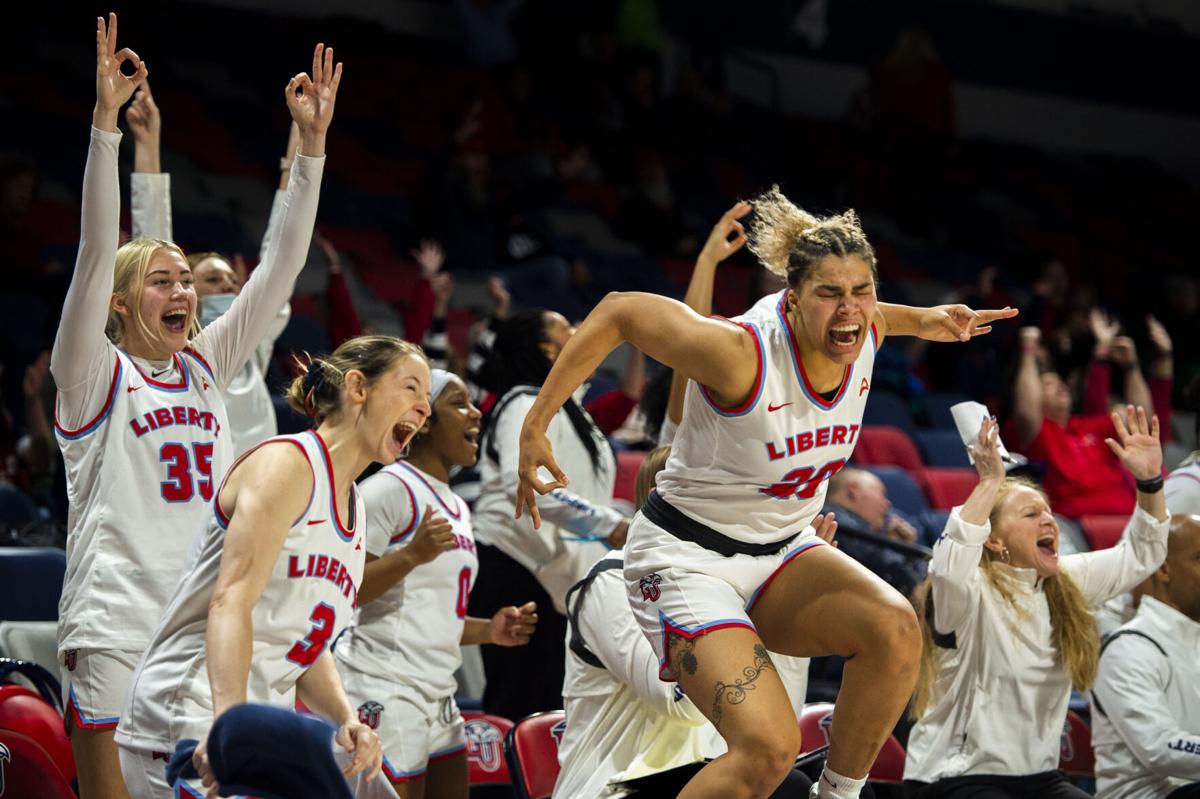 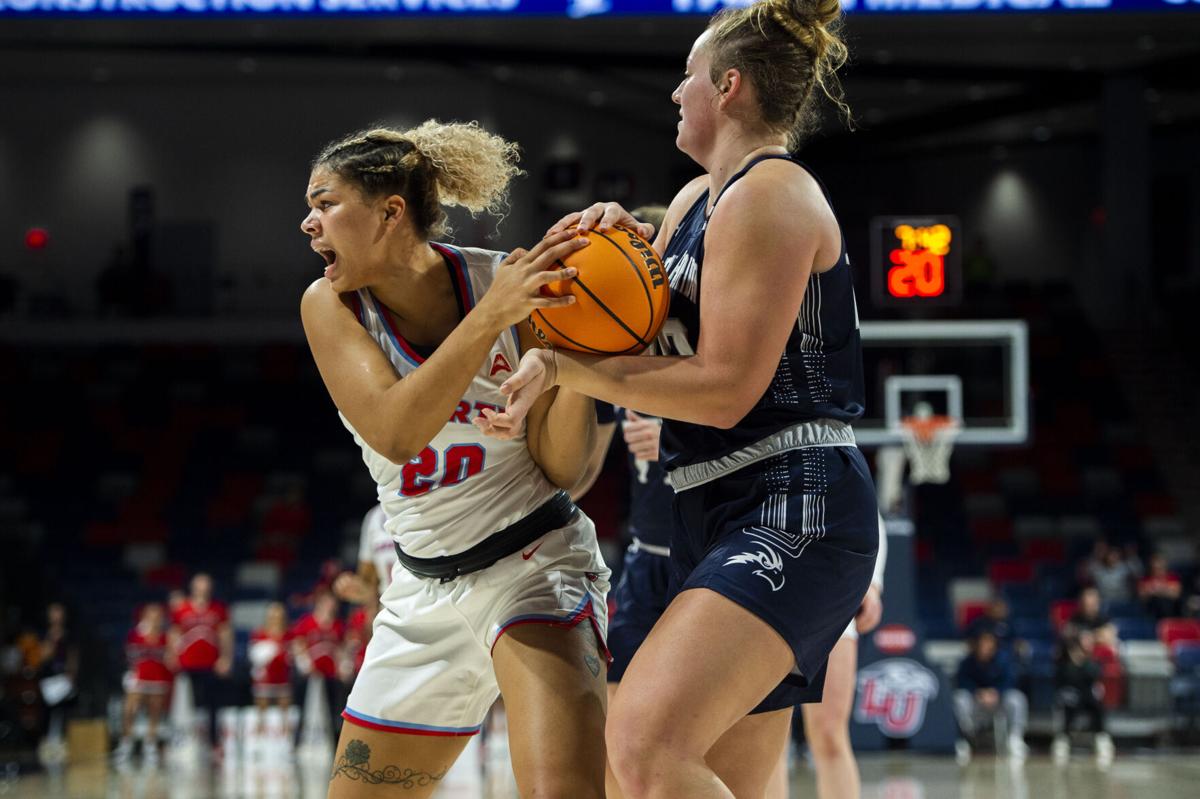 Dee Brown could barely turn around in the paint without bumping into a North Florida post player. The Liberty women’s basketball guard kept going up with a shot, only to be turned back again and again.

It was in the split second before Brown went up for her third shot when Flames coach Carey Green saw something different in his guard. She found “beast mode.”

Brown finished on her third shot attempt around the rim and unleashed a scream that reverberated throughout Liberty Arena. The sequence ignited her teammates and, for all intents and purposes, finished off the Ospreys.

Brown finished with 15 points, 12 rebounds, four assists and three steals as Liberty rallied from an early double-digit deficit and pulled away in the second half for a 61-50 victory over North Florida on Wednesday evening before an announced crowd of 863.

“For me, that was the energy of the game. That described Liberty,” Flames point guard Kennedi Williams said of Brown’s effort. “… That was a great play.”

Williams created off the dribble late in the shot clock and finished through contact as she attacked the rim.

Her three-point play sparked an 8-0 run that helped the Flames extend the lead back to double figures.

“Let’s use this energy and translate that to the game,” Williams said of her three-point play. “Keep your foot on their neck, put them down and put them out of the game.”

Williams matched her season high with 11 points to go with two rebounds and three assists.

Nenna Lindstrom, who tallied a career-high 15 points Saturday in a win over Kennesaw State, scored in double figures for the second straight game with 11 points on 4-of-11 shooting.

Liberty extended its winning streak to 12 games despite a dismal shooting performance.

The Flames made less than 40% of their shots for the sixth time this season (38.1% Wednesday against UNF), but capitalized on a whopping 21 offensive rebounds.

They scored 19 second-chance points, none more important than Brown’s second-chance opportunities with 2½ minutes remaining by which Liberty put away the Ospreys.

“I thought we did outstanding, maybe it was the best rebounding we had all season thus far,” Liberty coach Carey Green.

The Flames owned a season-high plus-26 rebounding margin (53 to 27) and limited UNF to four offensive rebounds.

“We did a good job on the boards tonight,” Green added. “I think that was a major difference because we got more shots.”

UNF opened the game making four of its first five shots and took a 10-0 lead in a little more than two minutes. The Ospreys capitalized on three turnovers and three missed shots by Liberty to race out to the early edge.

Brown got Liberty back on track by stripping the ball and going in for a layup that ignited an 11-3 spurt to cut the deficit to two points in a matter of two minutes.

The Flames had to overcome a six-minute scoreless stretch in the second quarter and trailed 28-25 at the half thanks to Williams’ layup with 1.9 seconds remaining.

Evans, who had 10 points and seven rebounds for UNF, extended the lead to 30-25 on her layup with 9:08 remaining in the third quarter.

That was the Ospreys' lone field goal in the third quarter.

They missed their final 10 shots from the field in the frame as the Flames unleashed a 13-0 run to end the quarter and take a 42-32 lead into the fourth quarter.

“It was energetic. It was live, it gave us the fire that we needed,” Williams said of the third quarter.

The Ospreys were without leading scorer Jazz Bond. The 6-foot-4 forward, who averages 16.1 points and 7.8 rebounds per game with 35 total blocked shots, had her left hand wrapped as she sat on the bench with her teammates.

Liberty guard Dee Brown goes up for a shot against North Florida at Liberty Arena on Wednesday. Brown finished with a double-double in the victory.