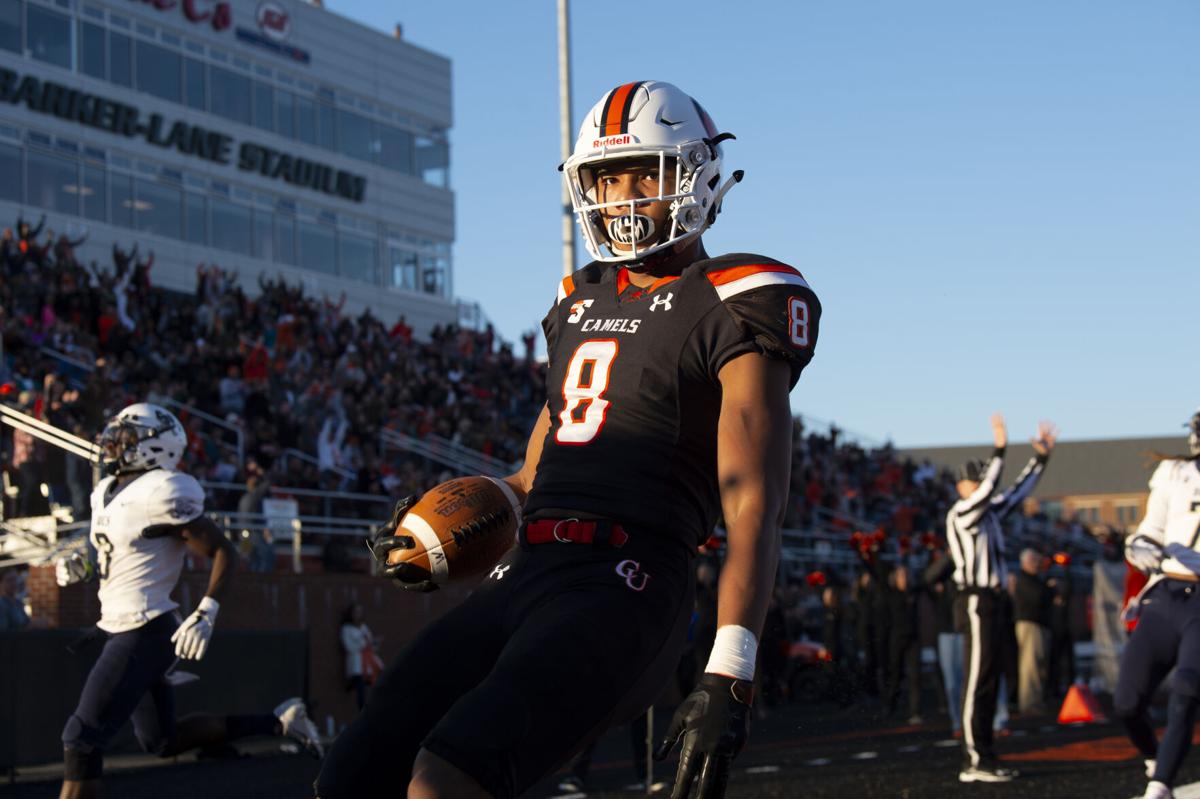 Campbell wide receiver Caleb Snead celebrates after scoring on a 65-yard touchdown pass in the third quarter against Charleston Southern in the 2018 regular-season finale. 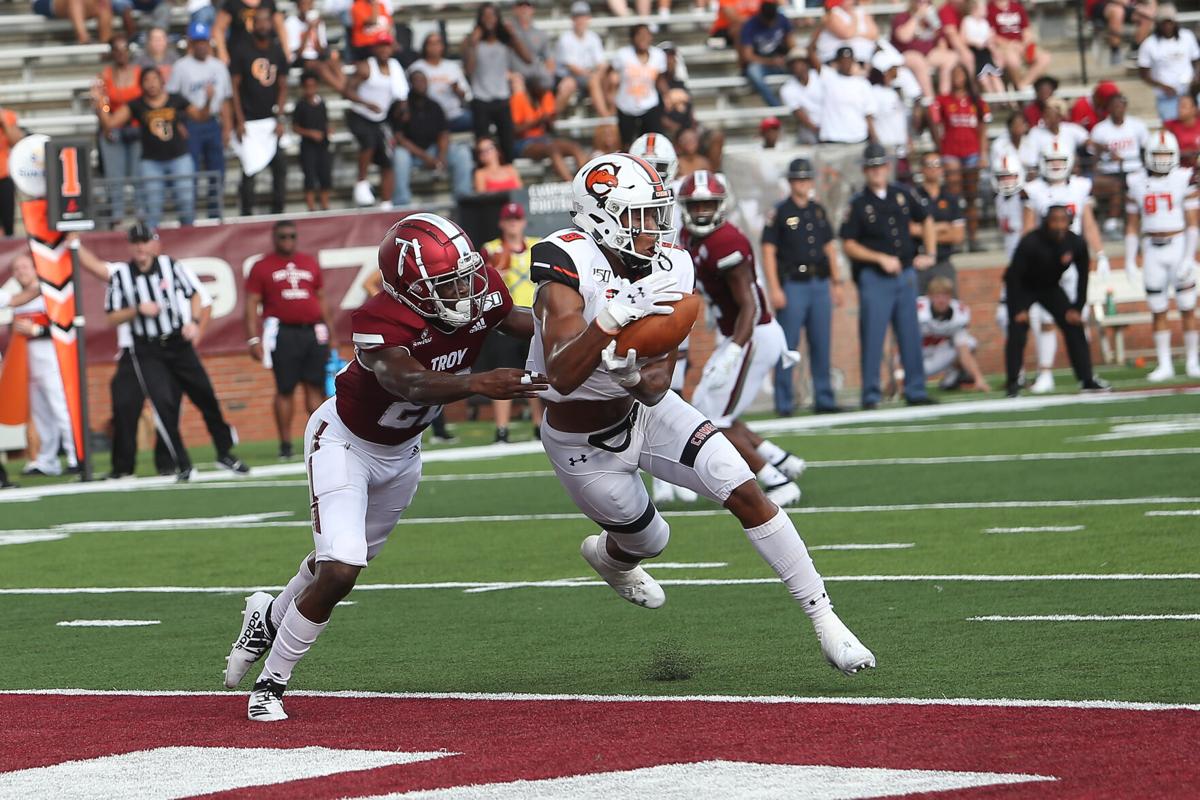 Campbell wide receiver Caleb Snead hauls in one of his two touchdown receptions in the Camels’ 2019 season opener against Troy.

It was painful for the Lynchburg native to be relegated to observer for the abbreviated four-game schedule. The emotional torment was compounded by the physical pain he felt recovering from offseason surgery to repair a torn labrum in his hip.

Snead’s mind filled with questions: Could he even play football again? If he stepped on the gridiron, was he going to be the player he was before the setback?

He stepped back onto the field in February and was fully cleared to participate in drills.

The first cut on the grass. The leap to secure a pass. The explosiveness in his route running. Any lingering questions or doubts were quickly erased.

“Coming out of it, I’m feeling the best that I’ve ever felt in my career. I’m healthy. I’m just feeling great,” Snead said in a recent phone interview. “All I can say is all glory to God at the end of the day. He’s the one that allowed me to go through that process so that I could get the things I’ve invested to get.”

Snead has gone more than 660 days between playing in a college football game. He hasn’t suited up for Campbell since Nov. 9, 2019 against then-No. 11 Kennesaw State, and his return will come in his hometown at 6 p.m. Saturday when the Camels face Liberty at Williams Stadium.

“Just knowing him and growing up with him, I know he’s always hungry,” Liberty cornerback Chris Megginson said. Megginson and Snead were teammates at Heritage High School for the 2016 season. “He trusted the process during that comeback time and rehab and everything. I’m just glad to see him back.”

Snead missed the final two games of Campbell’s 2019 campaign with a broken right hand he suffered in a three-point loss to Kennesaw State. He caught six passes for 99 yards and a touchdown against the Owls. He also revealed he played that game with an injured tailbone he suffered the week prior at North Alabama.

The hand healed without the need of surgery, but his return to the gridiron was derailed by what he called a “weight room incident” that tore the labrum in his hip.

He had surgery in June 2020 and was finally cleared to return in February before spring practice.

“It was tough. It was probably the hardest thing that I’ve ever had to do as a person, as a player,” Snead said. “I did a lot of growing personally off the field, a lot of maturing.”

His return to the field will come in front of family, friends and former teammates and coaches.

Snead hasn’t played football in his hometown since Nov. 25, 2016, when he suited up for Heritage in the 3A West championship game against Blacksburg at City Stadium.

In fact, Campbell hasn’t played in Virginia since Snead arrived on campus. That includes the 2017 campaign in which Snead was one of the 21 scholarship freshmen who redshirted as the Camels transitioned from being a non-scholarship program in the Pioneer Football League to a scholarship team in the Big South Conference.

“Honestly, I couldn’t ask for anything better,” Snead said. “ … It’s just been a long journey. For me to be able to come back and play Liberty in my first game back on the field, I don’t even know how to explain it. Excited? I could use so many different words. Just to be able to have my former coaches, all the family going to be able to see me.”

Snead said family and friends are making personalized shirts with his name and number on them to wear to Saturday’s games.

His return to the field will feature three familiar faces on the Liberty sideline. In addition to Megginson, Flames starting rover JaVon Scruggs was on Appomattox’s first two state championship teams when the Raiders met the Pioneers in the 2015 and ’16 regular seasons.

Liberty reserve linebacker Micah Glaize also played against Snead in 2015 and ’16 with Brookville.

“That’s pretty much my dog. That’s my brother,” Megginson said. The two grew up playing little league football and basketball together, and they played against each other in middle school. Snead attended Dunbar and Megginson went to Sandusky.

“I’m ready and excited to go up against him this weekend,” Megginson added.

The 6-foot-4, 215-pound Snead gives Campbell a viable big threat on the boundary. The redshirt senior, in less than two full seasons, ranks second in Campbell history with 1,364 receiving yards and 15 receiving touchdowns. He is two receptions away from cracking the program’s top five.

“Within their RPO game, he’s really effective at just giving the quarterback a big, strong, possession guy that attacks the football and runs really well for a guy his size,” Liberty defensive coordinator Scott Symons said. “ … I really think it gives them an ability to open up their offense a lot more and stretch the field vertically.”

Snead enjoyed a breakout 2018 campaign with the Camels. He garnered first-team freshman All-America honors from Phil Steele and HERO Sports, and he followed that up in 2019 with comparable statistics before his season was cut short because of the hand injury.

Snead, for his return to the gridiron, has set three goals for the 2021 season.

The first is staying positive at all times on the field through the games, and the second is making sure he never lacks self-confidence.

The third is more ambitious, but attainable: “I want to get back to where I was, and that’s to be a first-team All-American,” he said.

Snead didn’t just sit around while he was injured. He immersed himself in film study. He watched every game and practice his teammates competed in, then added more film review of other college and professional teams.

He wanted to learn every trick and gain every advantage so he could make an explosive return to the Camels’ lineup.

“The game actually slowed down for me, so now when I’m out there on the field, I’m not thinking about this [particular coverage],” he said. “I can read the coverage easily, so the mental part I think has gotten a lot better.”

The surgery to repair the torn labrum was actually a blessing in disguise. Snead said he was born with a natural impingement in his hip. The surgery created more range of motion, which has allowed him to become faster and more flexible.

That pain he endured while his teammates were playing hasn’t subsided. In fact, he said it was only fueled recently when the Big South released its preseason all-conference team, and Snead was not included among the wide receivers.

“The one thing that I think I just want people to see is that this monster, it ain’t done nothing but grow,” he said. “It ain’t went nowhere. It’s still here and it’s worse. I’m just ready to get on that field and kill it. That’s what I do. The people that are doubting me, I love it. It’s just fuel to the fire every day. I’m really just ready to show people that I’m one of the best in the nation.”

Liberty’s defense responded with a stop to force second down. Then another stop forced Troy to use its final timeout. And Storey Jackson came up with a sack to back up the Trojans even more. It was everything Freeze wanted and then some.

TROY, Ala. — Jacob Bodden fulfilled a childhood dream in 2018 when he played in his first collegiate game in his home state. The Liberty left …

This Saturday in the college football world will feel different.

Hugh Freeze got his first look at Liberty’s offensive line depth during Monday morning’s practice. Familiar faces that have been stalwarts in …

Campbell wide receiver Caleb Snead celebrates after scoring on a 65-yard touchdown pass in the third quarter against Charleston Southern in the 2018 regular-season finale.

Campbell wide receiver Caleb Snead hauls in one of his two touchdown receptions in the Camels’ 2019 season opener against Troy.