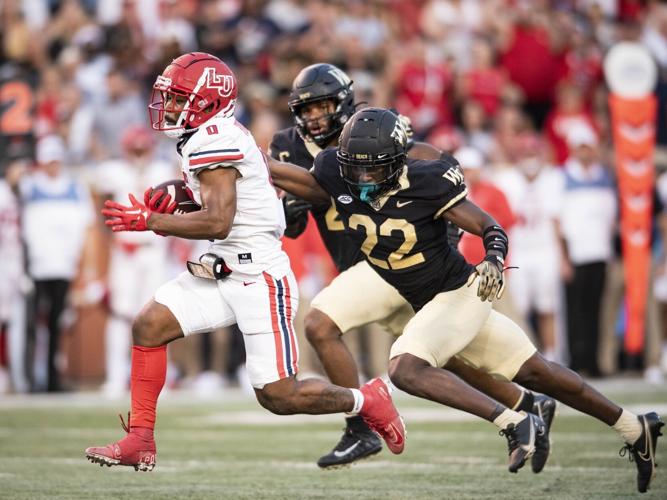 Liberty running back Dae Dae Hunter breaks away from Wake Forest’s AJ Williams to score a touchdown in the third quarter on Saturday at Truist Field in Winston-Salem, North Carolina.

Liberty running back Dae Dae Hunter tries to run around the pursuit of Wake Forest linebacker Ryan Smenda Jr. during the second half Saturday in Winston-Salem, North Carolina.

Liberty running back Dae Dae Hunter runs against Wake Forest during the second half Saturday in Winston-Salem, North Carolina.

Take a quick glance at Dae Dae Hunter. A first impression from an outsider would lead to the thought of the 5-foot-10, 190-pound running back at Liberty being the change-of-pace option, one whose speed makes him a threat on zone runs and catching the ball out of the backfield.

Now watch any one of the Flames’ first three games of the 2022 season. Hunter lowers his shoulder expecting to run over defenders. It doesn’t matter if they are 290-pound tackles, linebackers crashing into the line of scrimmage at full speed, or defensive backs trying to wrap him up around the knees. If a defender is in Hunter’s way, he wants to run through them.

Hunter packs a punch in his frame. And he adds speed — evident in his 43-yard touchdown run last weekend at Wake Forest — to give Liberty a multi-dimensional back who has turned into the featured option through three weeks. The Hawaii transfer has remained healthy as Shedro Louis and T.J. Green have battled injuries in the season’s early stages.

“Me personally, I expect a lot more out of myself honestly. Being tackled by one person kind of irks my soul. It don’t let me sleep at night,” Hunter said with a laugh Monday. “My expectation for myself is far greater than I … think the coaches have for me, but I just hope I can do what they expect of me and do it to the best of my ability and get everything I got and then see how the outcome comes. If they’re happy with it, I’m glad, but I’m going to do my best at all times.”

Hunter and the rest of the running back corps expect this season’s attack to be more like a three-headed monster than solely relying on Hunter’s legs. Green hasn’t played yet because of a left-knee injury, while Louis has battled ankle injuries. Louis’ latest ankle setback against Wake led to Hunter playing every significant snap over the final three quarters against the then-No. 19 Demon Deacons.

Hunter didn’t disappoint. He rushed for a season-high 93 yards on 18 carries against Wake and he got stronger as the game progressed. Hunter had 79 yards on 12 attempts over the final 30 minutes as the Flames racked up 131 of their 181 rushing yards in the second half.

Hunter, who said he likes watching highlights of tailbacks such as LeSean McCoy, Barry Sanders and Kadarius Toney, has rushed for 60-plus yards in the first three games and leads the team with 219 rushing yards. He had 21 carries through the first two weeks as Louis posted a team-high 26 rushing attempts.

Louis’ ankle injury, suffered in the first quarter last weekend, may have him limited in Saturday’s home game against Akron (6 p.m. on ESPN+).

“Hawaii kind of prepped me for a lot of this. At Hawaii, we really didn’t have a lot of backs practicing where you’re practicing all practice and doing all that,” Hunter said. “I was prepped for that. It wasn’t too much.”

Flames coach Hugh Freeze said Malik Caper is “about well” after suffering an ankle injury in the team’s first preseason scrimmage. Green traveled with the team to Wake and practiced Tuesday with a knee brace that was significantly smaller than the one he wore last week.

“I feel great about the room, feel great about Dae Dae, just we haven’t been healthy as a whole,” Freeze said. “We haven’t been healthy with T.J., Shedro’s been beat up several games and obviously didn’t play the other night but a few snaps before he hurt his ankle. We’re thin there right now. We need Dae Dae to stay healthy for sure and hopefully get T.J. back this week.”

Hunter was the only running back signed by Liberty in the latest recruiting cycle. He spent his first two seasons at Hawaii and racked up 834 rushing yards and five touchdowns over 19 games.

He entered the transfer portal at the beginning of December. Johnson revealed he was at an airport ready to travel to recruit another running back when he received a call from either Tim Baggett or T.J. Randall in the recruiting department with information on Hunter, and the message was to take a look at Hunter’s film.

Johnson watched the initial film on his phone, then watched more on the television in his hotel room following the flight. It became apparent that Hunter’s skill set made him an immediate target on the recruiting trail.

“We had to fight now. We had to fight. Some other schools came in the picture,” Johnson said. “The values that we have here and the core values and when we talk about family and love in our culture and this organization, it was a fit for him. We’re blessed to have him.”

Hunter and Green actually knew of each other well before Hunter signed with Liberty. Hunter was born in Colorado Springs, Colorado, and his family moved to Chandler, Arizona, for his senior season of high school.

Hunter spoke highly of teaming up with Green in the spring and in training camp, and he’s looking forward to sharing the backfield in the coming weeks so the running back rotation can be at its best.

“They’re going to be back in action, no question. Back in question full speed, running and toeing the thing,” Hunter said of Green and Louis. “We don’t really got no worries about that. … We really have no doubts in there.”

Liberty football notebook: Freeze 'hopeful' Salter and others will be available at ODU, and more

There might be good news on the horizon for the offense heading into this weekend’s matchup at Old Dominion (6 p.m. Saturday on ESPN+).

NORFOLK — Johnathan Bennett was a surprise entrant into the Liberty offense when the second half opened Saturday evening at S.B. Ballard Stadi…

Turner Gill and Bobby Wilder were the respective coaches for Liberty and Old Dominion when both programs moved to the Bowl Subdivision. Gill a…

Flames post-practice report: Players from Florida get good news from families, and more

Who didn’t lose this week?

Akron finished off a 10-play drive with a touchdown pass early in the fourth quarter this past Saturday evening, and it allowed the Zips to tr…

The pressure created by Liberty’s defensive line doesn’t always result in a sack. It can be collapsing the pocket to prevent a mobile quarterb…

Quarterback stability has been a hallmark for Liberty football for nearly the past two decades. The Flames tend to go complete seasons with on…

Jaivian Lofton’s teammates still in awe of his SportsCenter No. 1 catch

CJ Yarbrough is no stranger to grabbing attention on SportsCenter for one-handed catches. The Liberty wide receiver made the highlight-reel fo…

Liberty running back Dae Dae Hunter breaks away from Wake Forest’s AJ Williams to score a touchdown in the third quarter on Saturday at Truist Field in Winston-Salem, North Carolina.

Liberty running back Dae Dae Hunter tries to run around the pursuit of Wake Forest linebacker Ryan Smenda Jr. during the second half Saturday in Winston-Salem, North Carolina.

Liberty running back Dae Dae Hunter runs against Wake Forest during the second half Saturday in Winston-Salem, North Carolina.