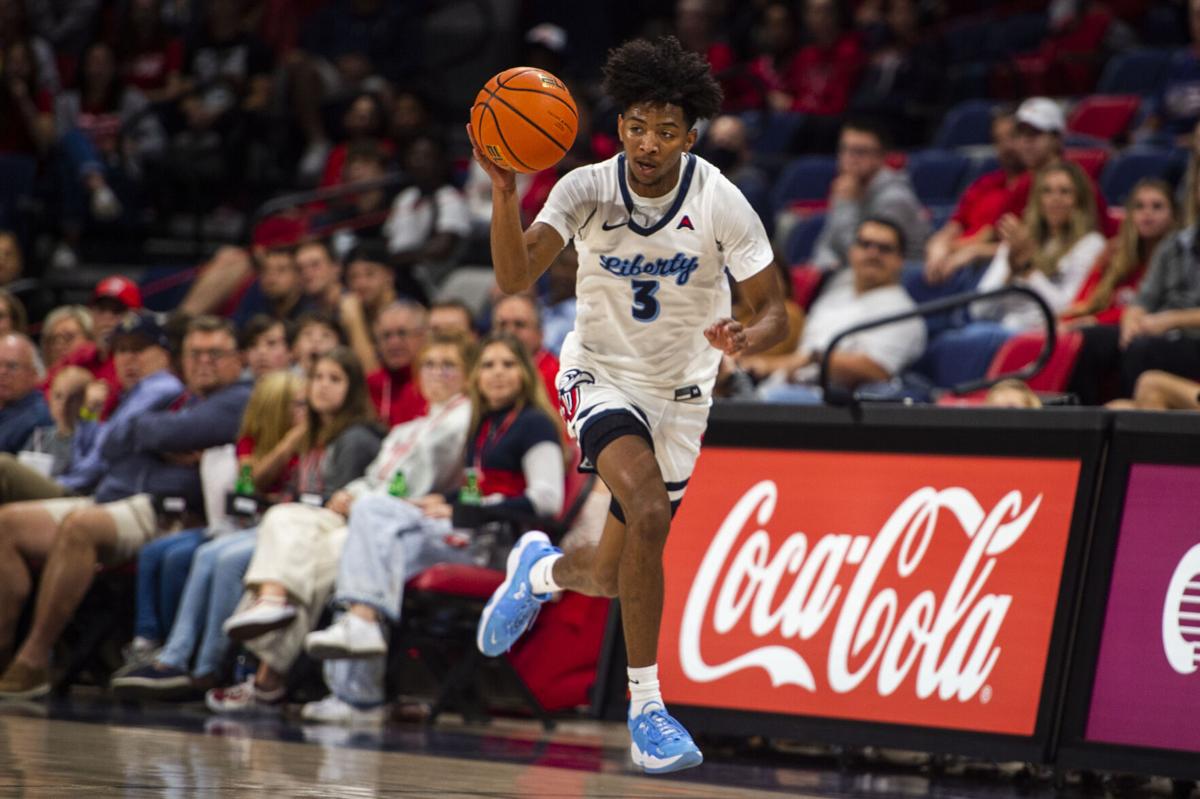 Liberty guard Isiah Warfield dribbles down the court during a game against Regent University at Liberty Arena on Nov. 11. 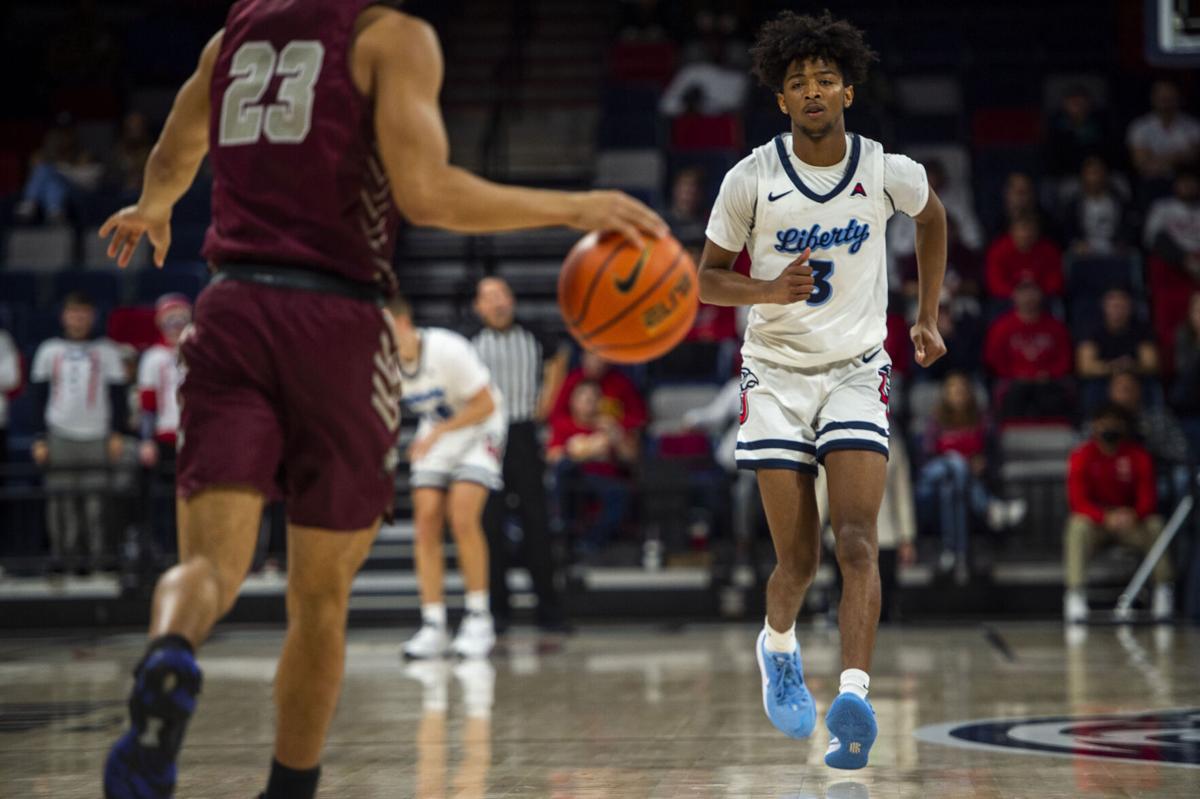 Isiah Warfield was lucky if he saw any sort of playing time in his freshman season. The Liberty men’s basketball rotation featured veterans, especially on the wing, and that meant the 6-foot-5 guard was relegated to watching most of the action from the bench.

What a difference one season can make.

Warfield is now one of the first players called off the bench by coach Ritchie McKay. The sophomore doesn’t need to score in order to make an impact. He draws charges, plays strong perimeter defense, and makes the extra pass to get a teammate a better shot on offense.

Warfield’s impact off the bench has given the Flames (9-6) a versatile presence off the bench. He and his teammates begin their quest for a fourth consecutive ASUN Conference title when they open league play at 7 p.m. Tuesday against Stetson (6-7) at the Edmunds Center in DeLand, Florida.

“I would just say just being patient and staying ready for when the opportunity arrived. That was the main thing I just wanted to focus on was being a good teammate when I wasn’t getting the time,” Warfield said. “Just being able to capitalize on the opportunities I was getting and being able to do what I needed to do for whatever the team needs is something I wanted to focus on.”

Warfield is averaging a little more than 10 minutes per game this season, which is more than double the time he saw in limited action in the 2020-21 campaign.

His statistics don’t tell the story of the impact he’s made on the court. He averages a meager 1.1 points per game, but his role comes as a perimeter defender.

Warfield draws at least one charge per game with his ability to get into position whenever a guard attempts to penetrate the paint. Plus, he spent last season learning from Elijah Cuffee how to play strong perimeter defense in order to take away an opposing team’s top scorer.

“Learning from Cuff, Chris [Parker], Darius [McGhee] and these guys, them going through it before I did, it really helped me a lot,” Warfield said.

Warfield is joined off the bench by Brody Peebles, Micaiah Abii, Blake Preston and DJ Moore in McKay’s rotation. Outside of Preston, the other four are freshmen and sophomores who will get their first taste of significant playing time against ASUN competition.

“I’m really proud of Isiah. I think there was a juncture in his tenure here that he felt like the door of opportunity was closing or maybe even shut, and he never quit, never gave up,” McKay said. “He handled and responded to that perception incredibly well. What it’s done for him has inspired or invoked a belief in his teammates and from his coaching staff that he adds a ton of value.

“As I search to find a consistency of a rotation, and I think it’s going to be a work in progress because we have a lot of good players, but I’m really, really proud of Isiah. It speaks to the influence that his circle has on him of mom and dad and friends and family. He’s really been a bright spot for us.”

Warfield admitted it was difficult to spend last season watching so much of the action from the bench. He played at two different schools in high school — Sewickley Academy and Central Valley High in Pennsylvania — and was an all-state selection at both stops.

It was during last season he reached out to his family members and close friends to get insight into how he needed to handle this new role.

His father, Mike Warfield, is the football coach at Aliquippa High in Pennsylvania, and he reiterated what others relayed to Warfield.

“I was able to reach out to them, they reached out to me to make sure I was OK and I was still keeping my head straight and that I wasn’t worried about what was going on and keep growing as a person,” Warfield said. “I think just being able to talk to people like that, like my close friends and then my parents were really big supportive people in that timeframe.”

Their advice about waiting for his time has been something McKay has preached since he returned to Liberty prior to the 2015-16 season. McKay witnessed Virginia coach Tony Bennett reward players who were dedicated to the process and waited for their chance to make an impact.

McKay saw the same in how Warfield handled his freshman season and then entered this season ready to contribute in any way he could.

Warfield, Joseph Venzant and Shiloh Robinson have become the defensive stoppers on this young team. Warfield and Venzant have the length on the perimeter to form a formidable 1-2 punch, while Robinson has the size to match up with guards and forwards.

“It’s a luxury when you have versatility on offense, but also defensively,” McKay said. “Isiah, Joseph and Shiloh certainly have some defensive versatility. The pack-line defense is a hard scheme. You get better the longer you’re in it.

“I’m happy with where we’re going, especially those three on the defensive end,” he added, “but I even think it’s going to be better towards the end of the year and beyond.”

Brown’s gritty play, especially on defense, has helped Liberty open the season with the program’s best start since the 1997-98 campaign. The Flames’ strong start will be challenged at 4 p.m. Saturday when they face Florida Gulf Coast.

Liberty guard Isiah Warfield dribbles down the court during a game against Regent University at Liberty Arena on Nov. 11.