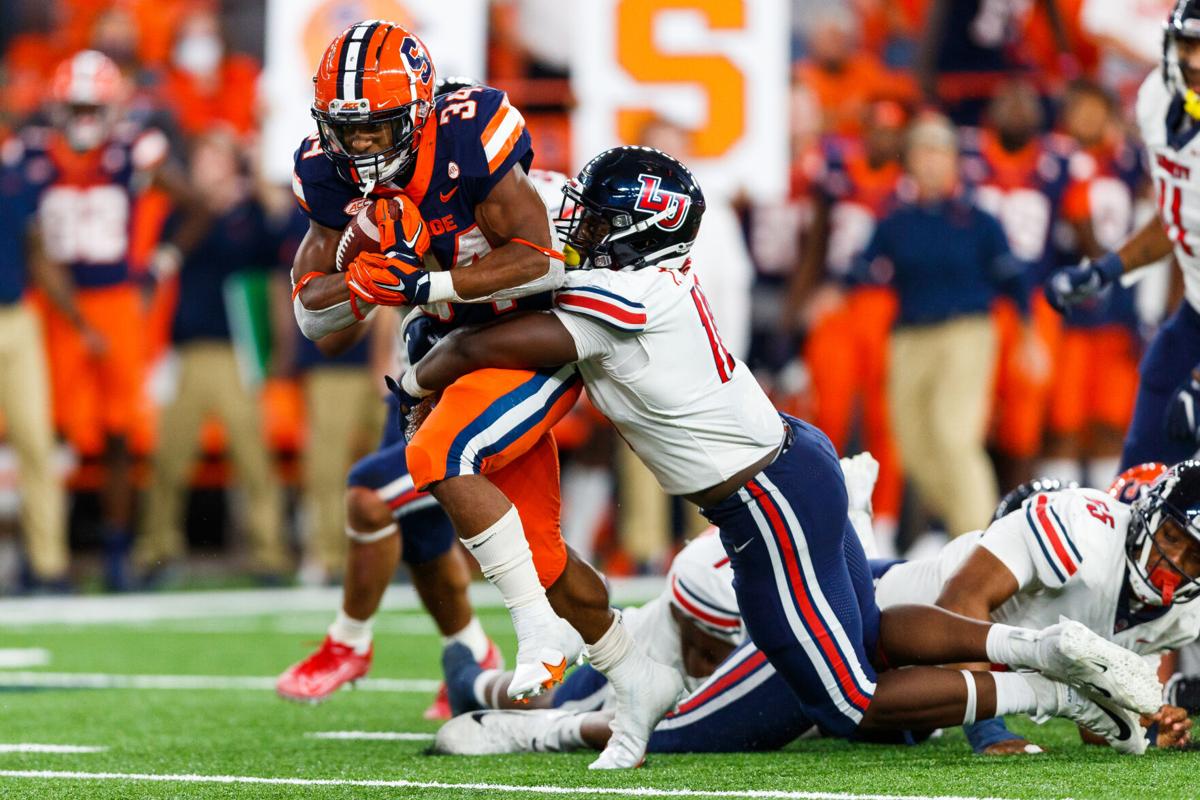 Syracuse running back Sean Tucker picks up yardage as Liberty defensive end TreShaun Clark tries to bring him down Friday night inside the Carrier Dome in Syracuse, New York. 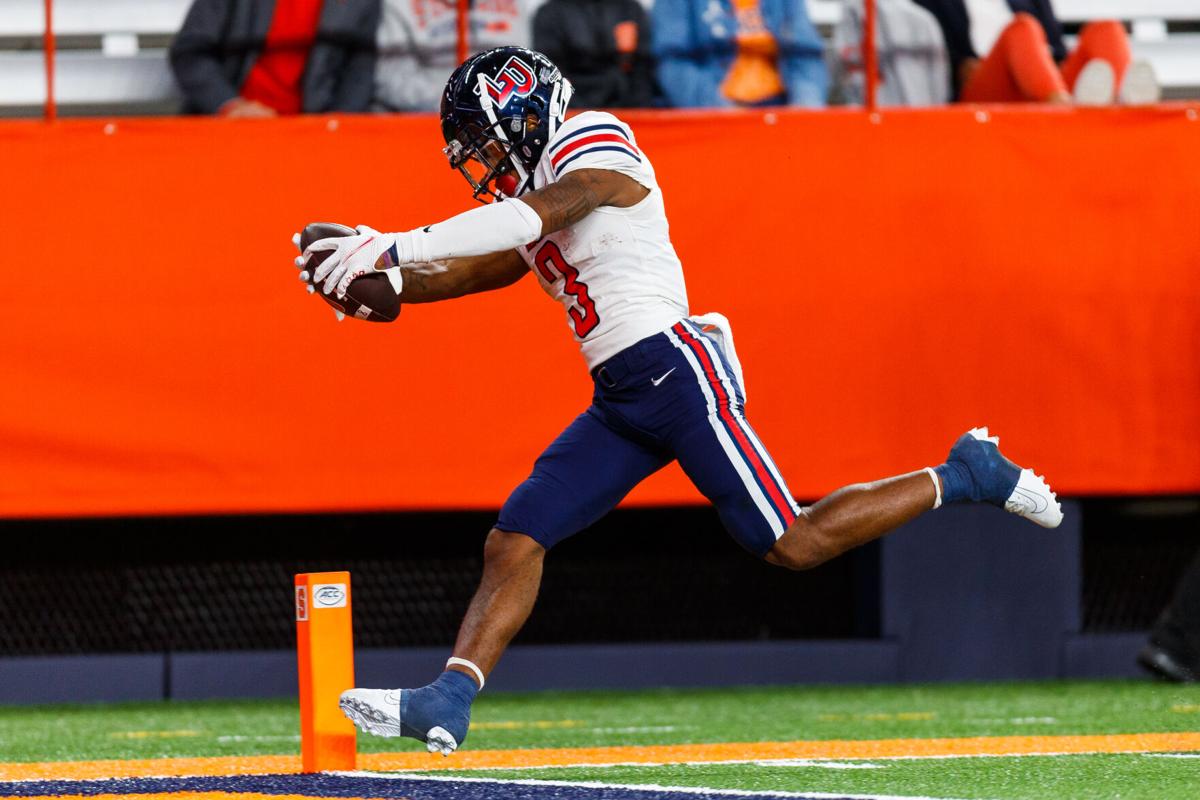 DeMario Douglas crossed the goal line to complete a 33-yard touchdown reception early in the fourth quarter that tied the game at 21 between Liberty and Syracuse Friday night inside the Carrier Dome in Syracuse, New York.

SYRACUSE, N.Y. — Liberty rallied from a 14-point deficit by protecting Malik Willis in the pocket. Willis engineered a pair of touchdown drives to tie the game, and the Flames had an opportunity late in the fourth quarter to drive again to possibly win.

Then the Syracuse pass rush, which had greeted Willis with a wave of orange and blue jerseys in the backfield for the majority of the first half, finally got to him again, and it resulted in the game-turning play.

Andre Szmyt’s 35-yard field goal as time expired lifted Syracuse to what turned into a thrilling 24-21 triumph over Liberty (3-1) in Friday’s primetime showdown in the Carrier Dome.

Willis, despite the miscue, helped bring Liberty back from a 14-point deficit with a pair of touchdown passes to tie the score at 21.

He found CJ Daniels down the left sideline on a free play for a 23-yard score with 2:57 left in the third quarter to cut the deficit to 21-14, and then on the following drive connected with DeMario Douglas on an out-and-up for a 33-yard score to tie the game at 21 with 14:31 left in the fourth.

Liberty had a chance to take the lead with a little more than eight minutes remaining, but Willis was stopped for a 1-yard loss on fourth-and-goal from the 2.

Syracuse was forced to punt on its ensuing drive.

Willis then picked up 10 yards on a designed run to start the following drive. On the second play, he rolled to the left but was hit by Cody Roscoe before he could release the pass.

The ball came loose, and Mikel Jones recovered at the Liberty 30.

Syracuse (3-1) milked the rest of the time off the clock and set up Szmyt for the game-winner.

The second-half rally helped Liberty’s offense overcome a dreadful start. The Flames were overwhelmed by the Syracuse defense for the first 25 minutes of the first half. The Orange recorded two third-down sacks to end a pair of Liberty drives, and the Flames were unable to sustain much of anything on offense.

Willis, with the pressure in his face, completed 3 of his first 6 passes for 31 yards.

He got the offense going on the Flames’ penultimate drive of the first half that ignited an offense that had become stagnant.

His 22-yard completion to Treon Sibley down the left sideline gave the Flames needed breathing room. Two plays later, Willis connected on a pass to Noah Frith down the right sideline to the Syracuse 7.

Frith, on the play, slid his left foot on the Carrier Dome turf to have a foot in bounds on the completion, and that set up the Flames for the first time inside the Syracuse 10-yard line.

They didn’t wait too long to finally find the end zone, as Willis swung a pass out to Shedro Louis in the flat, and he ran through a tackle attempt to finish the scoring play.

Willis completed all three of his pass attempts for 54 yards on the scoring play.

Liberty, with 93 seconds left in the half, found life and trailed by one score.

The late momentum shift was needed, as Syracuse used its short passing game and the running of Sean Tucker to take a 14-0 lead to start the game.

It marked the first time Liberty trailed by more than seven points since a lopsided 55-27 loss to Virginia on Nov. 23, 2019.

Syracuse finally broke through on a 12-play, 92-yard drive to take the lead.

Garrett Shrader, who got the start at quarterback over Tommy DeVito, capped the lengthy drive by diving over the pile for a 1-yard score to put the Orange ahead 7-0 with 13:40 left in the second quarter.

The drive, which was backed up to the Syracuse 4, was extended when Elijah James was called for an illegal hands to the face. The 15-yard penalty allowed the Orange to pick up a first down instead of facing third-and-10 from the shadow of its goal line.

The Orange wasted little time on its subsequent drive, going 55 yards in four plays. The drive was helped out by a pass interference call on JaVon Scruggs, and Tucker followed by taking a pitch to the left and scoring from 37 yards out for the two-touchdown advantage.

DENTON, Texas — Liberty star quarterback Malik Willis was transported to a nearby medical facility after suffering a left foot injury in the s…

McCaw: Liberty in a good situation with FBS independence, but monitoring conference realignment

For now, independence appears to be Liberty’s future, even with the Flames still in the exploratory process of evaluating a conference home.

Malik Willis went from being unable to put any pressure on his left foot to scrambling around, finding open receivers and helping Liberty get into the end zone in a dramatic victory at North Texas.

There is a new face among the Associated Press Top 25 pollsters for this college football season.

JaVon Scruggs was exhausted. The Liberty safety felt like he played an eternity in the blazing sun on the Apogee Stadium turf. Then he looked at the stat sheet and realized why it felt like an eternity: The Flames’ defense was on the field for 95 plays.

Scruggs, Liberty defense ready to lock in and execute at North Texas

Liberty veteran offensive line playing with a chip on its shoulder

Momentum was squarely on Liberty’s sideline late in the first quarter against Louisiana-Monroe. Skyler Thomas returned a blocked field goal to…

Liberty coaches still 'sick' and 'upset' after loss to ULM

Syracuse running back Sean Tucker picks up yardage as Liberty defensive end TreShaun Clark tries to bring him down Friday night inside the Carrier Dome in Syracuse, New York.

DeMario Douglas crossed the goal line to complete a 33-yard touchdown reception early in the fourth quarter that tied the game at 21 between Liberty and Syracuse Friday night inside the Carrier Dome in Syracuse, New York.