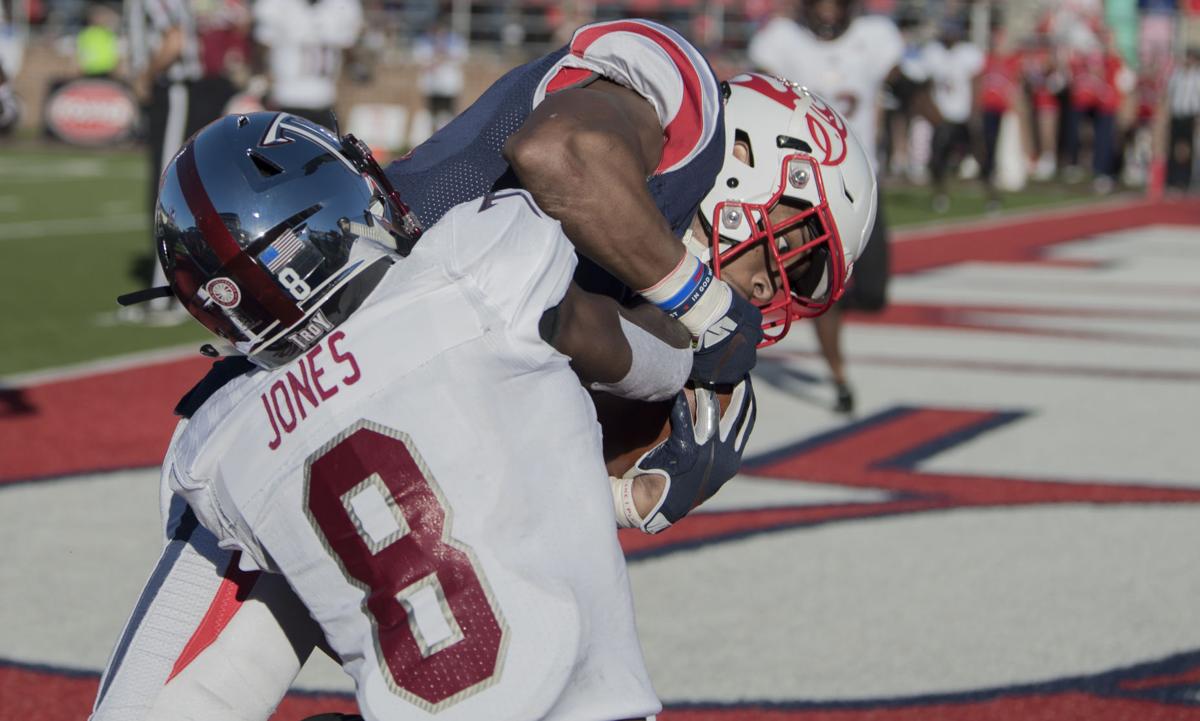 Flames receiver B.J.Farrow hauls in the game-winning touchdown late in the fourth quarter as Troy defender Marcus Jones makes a tackle in the end zone. 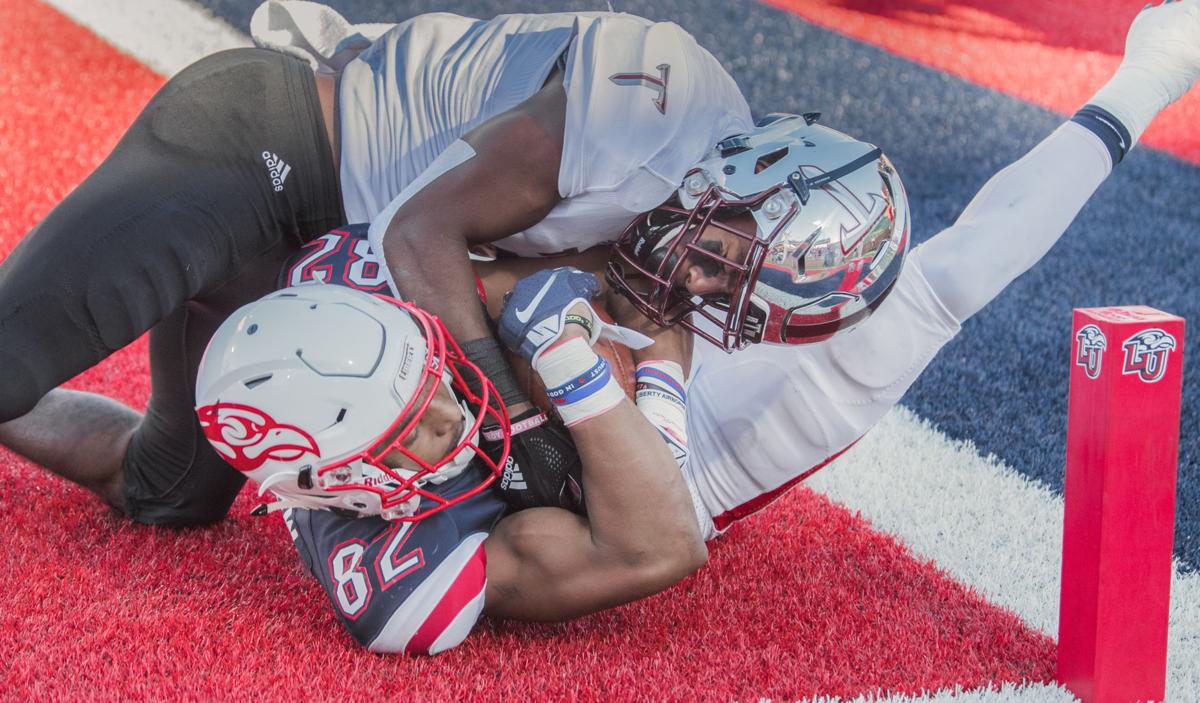 LU receiver B.J. Farrow hangs onto the ball as he scores the game-winning touchdown despite Troy defender Marcus Jones' attempt to rip the ball out. 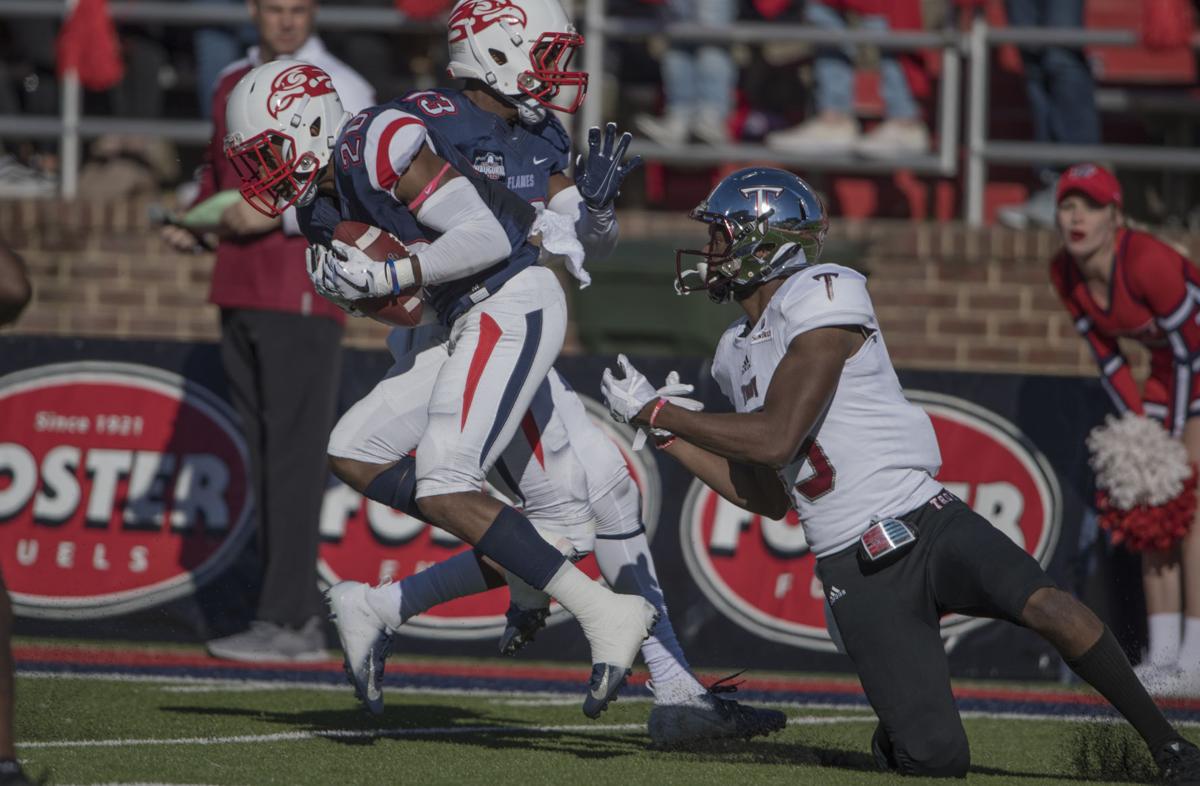 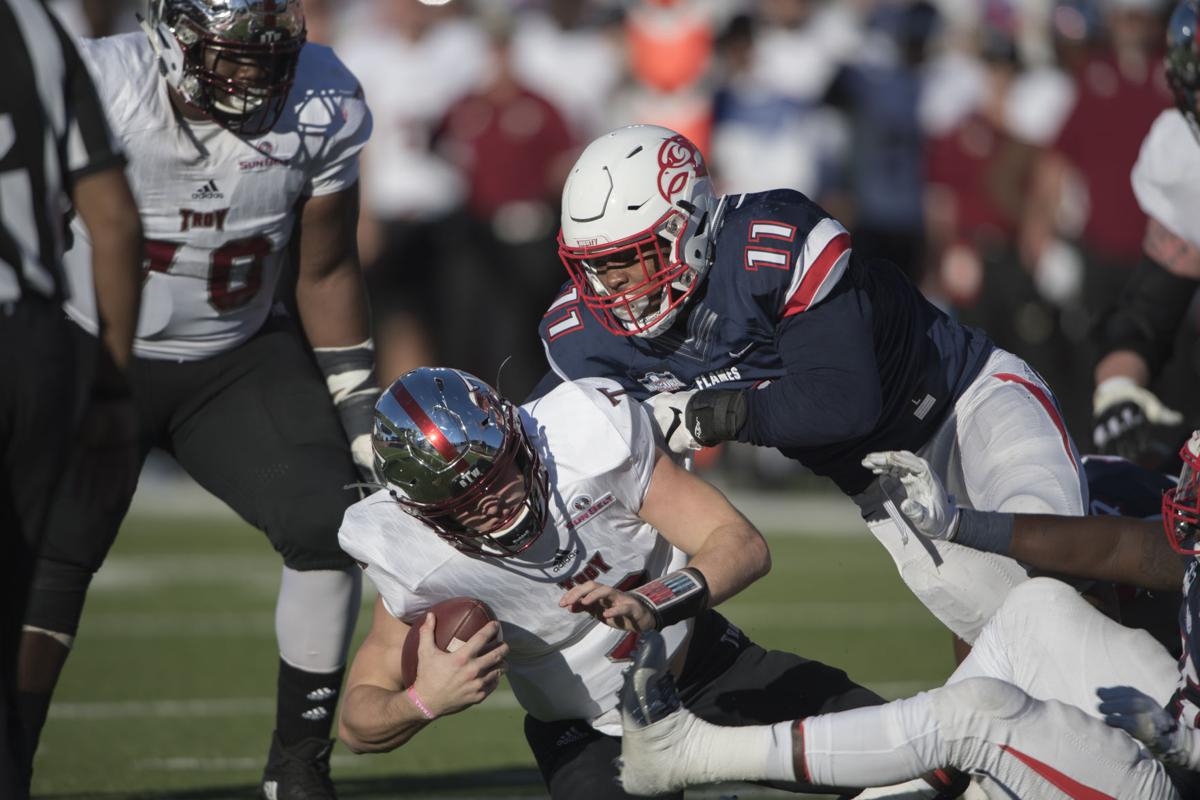 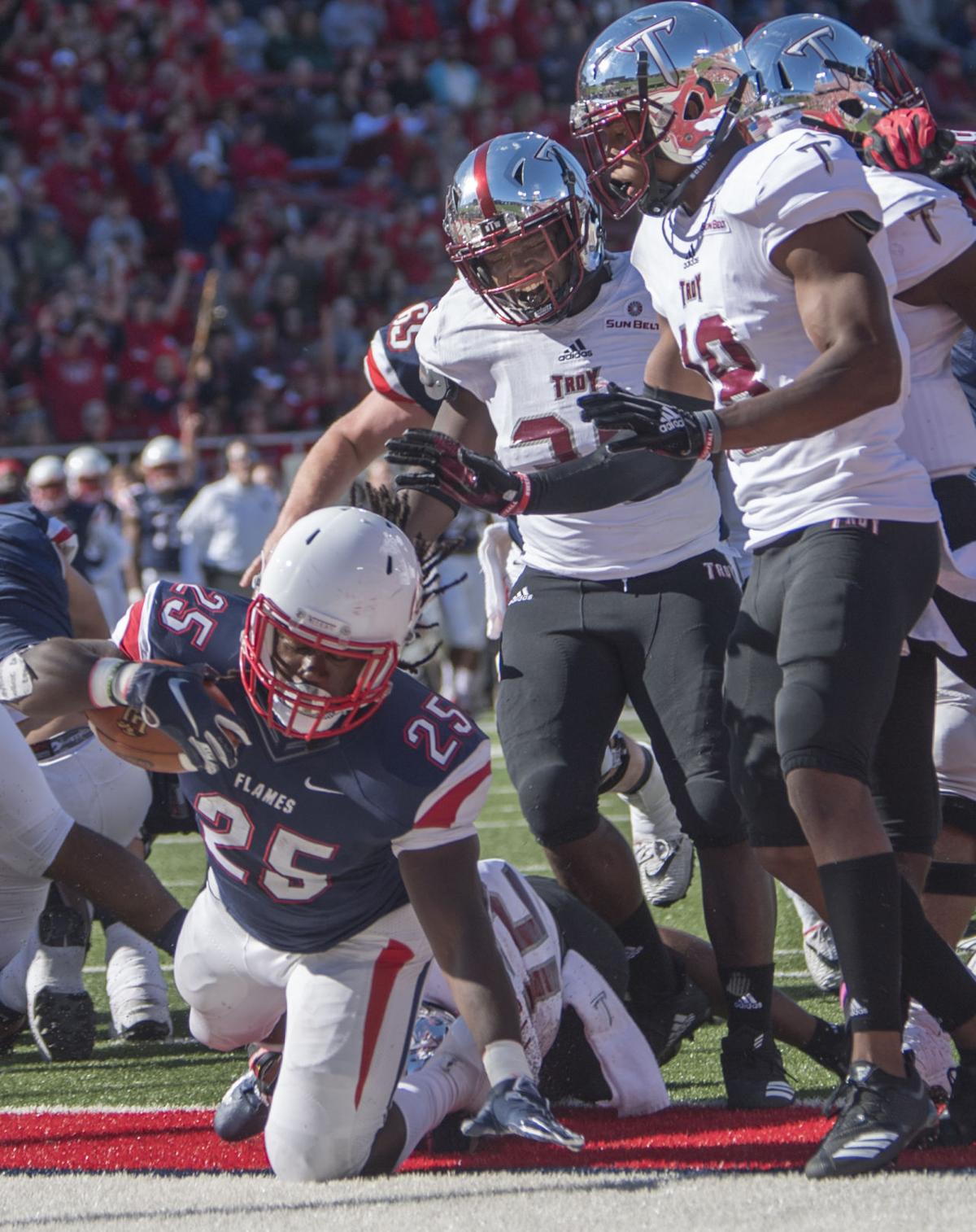 LU's Peytton Pickett gets into the end zone for a score against Troy.

Liberty’s biggest defensive adjustment against Troy wasn’t on the field.

It was in the coaches’ box.

Defensive coordinator Robert Wimberly moved from the sideline up to the fifth floor of the Williams Stadium press box, and Wimberly’s eyes in the sky benefited his defense.

The Flames played faster and displayed poise and confidence they lacked in previous weeks. The team’s best defensive effort of the season set up the offense’s go-ahead touchdown late in the fourth quarter for a 22-16 victory over the Trojans before 17,839 on a sun-splashed Saturday afternoon.

Wimberly, in his seventh season as the Flames’ defensive coordinator, moved up to the coaches box, and linebackers coach Josh Bookbinder and cornerbacks coach Marshall Roberts moved down to the sideline.

With the move, position coaches worked with the players directly on the sideline while the offense had the ball, instead of Wimberly coaching three different positions (safeties, linebackers and cornerbacks) after relaying coaching from Bookbinder and Roberts in the coaches box.

“We were able to make the most adjustments that we’ve made since I’ve been a coordinator just every series, just because you have position coaches talking to their young men,” Wimberly said.

“The adjustments definitely helped,” Liberty strong safety Elijah Benton said after finishing with seven tackles and a pass breakup. “ … Throughout the season we’ve been getting the calls kind of late, and [Wimberly] going up in the box, we got the calls a whole lot faster, and so it was easier to communicate and tell each other what we’re seeing.”

Troy used two quick pass plays of 49 and 23 yards to score at the end of the first quarter and take a 7-0 lead. Quarterback Sawyer Smith found mismatches in the secondary and connected with Damion Willis for the first big play before going to Deondre Douglas for the touchdown.

Smith and backup quarterback Gunnar Watson combined to throw for 70 yards on 9-of-21 passing through the final three quarters, and the Troy running attack was limited to 3.4 yards per attempt.

“They hurried us up two plays in a row, but I felt like the throws were the greatest,” Wimberly said. “I did not panic, and I just decided where going to do what we’re still doing. … They responded great in the second half.”

The Trojans had six second-half drives, four of which reached Liberty territory. However, the Flames limited Troy to a pair of Tyler Sumpter field goals, the second giving the Trojans a 16-14 lead with 12:48 remaining in the second half.

“It was crucial, especially from a defensive standpoint,” Benton said of the second-half stands, “but also from their offensive standpoint, it takes away a whole lot of energy, and it’s demoralizing for them to be able to move the ball down the field but not really be able to score, and when they did score on the two drives to only get field goals.”

The Flames’ penultimate offensive drive featured a trio of third-down conversions — all passes by quarterback Buckshot Calvert. The Troy defensive line harassed the junior quarterback frequently. But Calvert still connected with tight end Fidel Ogbeifun for 27 yards to convert the first third down, then found senior wide receiver B.J. Farrow twice for gains of 15 and 7 yards to get the ball to the Troy 9.

Then Calvert threw a jump pass to the back corner of the end zone that Farrow won over Troy cornerback Marcus Jones for the go-ahead touchdown with 2:23 remaining.

“I threw it up and gave him a chance. He made a great play,” Calvert said.

“My coaches trust me to make a play. We needed a play right then and there,” Farrow added. “I was the guy they trusted to get it, so it was up to me to go get it, and I did.”

Farrow had a season-high eight catches for 101 yards.

Calvert threw for 238 yards and two touchdowns on 17-of-32 passing to bounce back from a dismal first quarter that featured an interception. In the final three quarters, Calvert was 16 of 27 for 225 yards, recording both of his touchdowns in that span.

“We made plays when we had to make them,” Liberty coach Turner Gill said. “It wasn’t pretty … but you’ve got to find a way to win these kind of games. That’s why I’m so proud.”

The Liberty secondary lost two players, including a projected starter, to the transfer portal in late June. The coaching staff quickly has mad…

Brandon Robinson, who spent the majority of the 2019 season as Liberty’s primary backup quarterback, announced Monday on his Instagram page he…

Liberty picked up its sixth verbal commitment in the 2021 recruiting class Sunday, when cornerback Jaiden Hill announced his decision on socia…

Wendell McClain spent Monday morning on the football field at Tift County High School in Tifton, Georgia. He and his teammates, though, could …

Nate Hampton was among the large swath of high school juniors who attended the Liberty football junior day March 7. Hampton and the other pros…

Flames receiver B.J.Farrow hauls in the game-winning touchdown late in the fourth quarter as Troy defender Marcus Jones makes a tackle in the end zone.

LU receiver B.J. Farrow hangs onto the ball as he scores the game-winning touchdown despite Troy defender Marcus Jones' attempt to rip the ball out.

LU's Peytton Pickett gets into the end zone for a score against Troy.