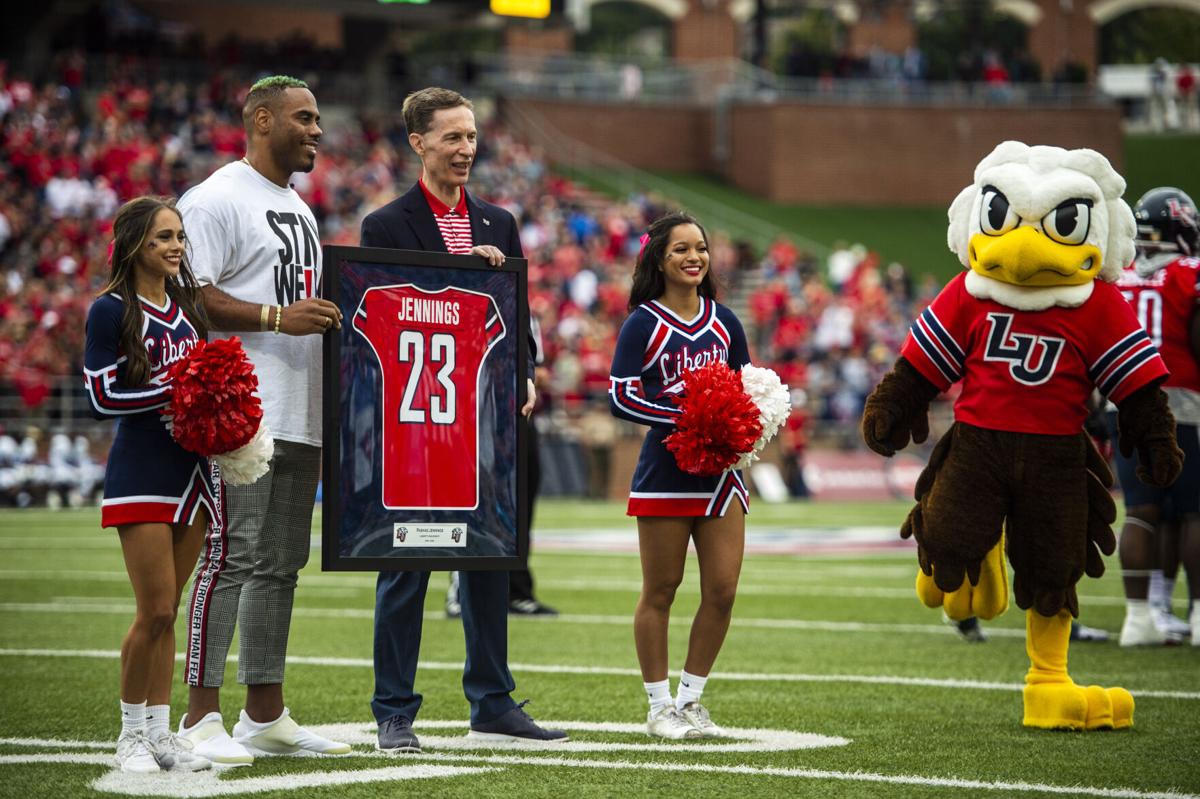 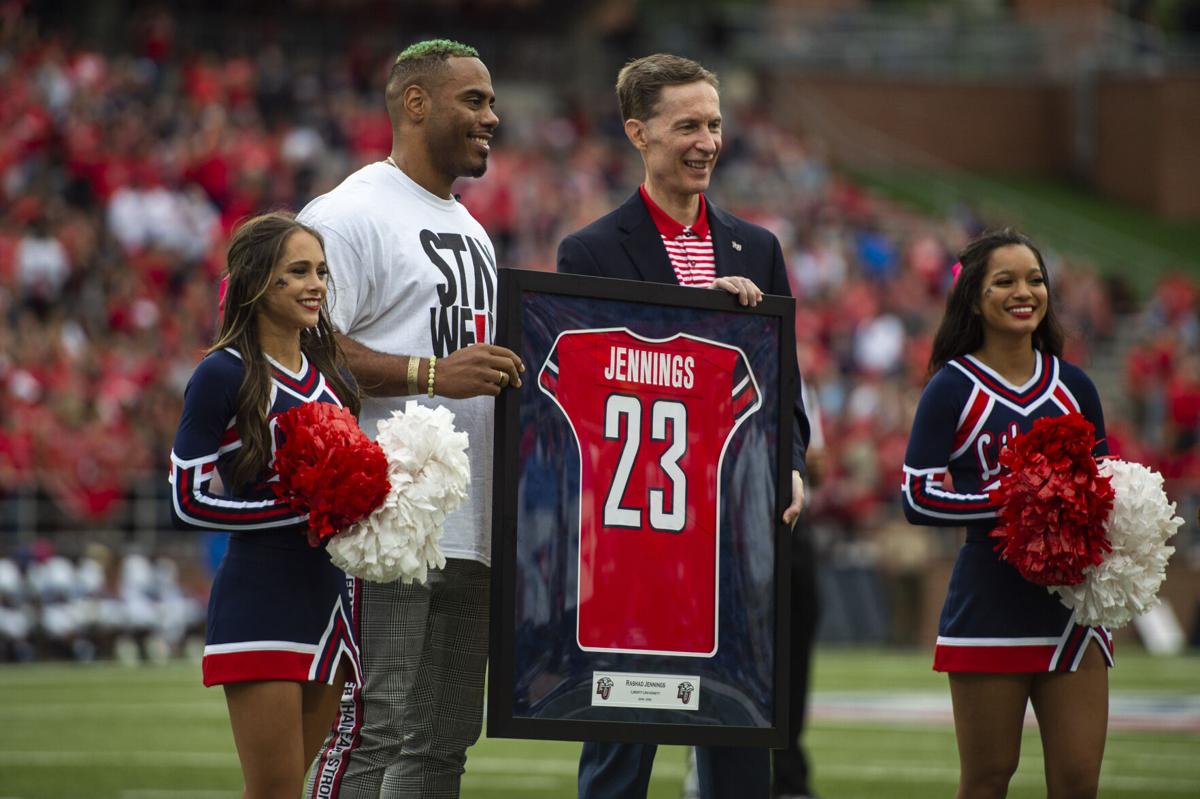 Rashad Jennings soaked in the moment. The cascade of applause coming from 19,935 fans in Williams Stadium. His family, close friends and former teammates cheering him on. The framed jersey sitting just in front of him.

The Forest native had to wait an extra year to be immortalized by the Liberty football program.

It was worth the wait.

Jennings became the fifth person in program history to be honored with a jersey retirement held Saturday during the Flames’ 41-13 Homecoming victory over Middle Tennessee.

“What’s really amazing is the years to come, as long as I live, there’s a legacy right there that my kids and grandkids and their grandkids can tell the story about why that name looks just like theirs,” Jennings said. “That’s actually your great-great grandfather and what he did. That’s why I try to live a life that people can mimic, because I want generations to come to look up what I did.”

Jennings’ No. 23 joins Edwards’ No. 83 and Green’s No. 86 to be retired. Those jersey numbers can still be worn by other players, while Falwell’s No. 71 is the only number that is not worn in any sport on campus.

Liberty announced in May 2020 that Jennings’ number was going to be retired, but the ceremony was pushed back because of the coronavirus pandemic.

“It was real nice to see them,” Jennings said.

Jennings, in three seasons with the program, rushed for 3,633 yards and set program records with 42 career rushing touchdowns, 22 100-yard games and 278 points scored.

He was a consensus first-team All-American in 2018 and was a back-to-back Big South Conference offensive player of the year in 2017 and ’18.

He played for seven seasons in the NFL with the Jaguars, Raiders and Giants, and won the reality TV competition show "Dancing with the Stars" shortly after his playing career concluded.

Jennings was inducted in the Liberty athletics Hall of Fame in 2018.

“It does mean a lot,” he said. “I know it’s not about me. I tell people that I represent an era of people, a time period that I happened to be coined because of it. It’s not just me.”

Skyler Thomas stared into a sea of fans holding up three fingers early in the third quarter. The sight brought a smile to the face of the Liberty strong safety.

The memory of his former teammate at Washington State was alive in the gesture, a nod to the number the late former WSU quarterback Tyler Hilinski wore.

Liberty honored Hilinski with the gesture and by having players wear special decals on their helmets as part of College Football Mental Health Week.

The Flames teamed up with Hilinski’s Hope Foundation, founded by Mark and Kym Hilinski after their son, Tyler, committed suicide on Jan. 16, 2018. The foundation offers resources to help promote awareness and education of mental health and wellness for student-athletes.

“That meant a lot to me. Tyler was one of my friends and my teammate and everything, and we just liked to hang out and kick it,” Thomas said. “For us to honor him way over here on the other side of the country, he still has that impact even though his situation. That just meant a whole lot to me that we’re still honoring and remembering him and he’s never forgotten.”

Liberty coach Hugh Freeze credited Kristie Beitz, the senior athletics director for academic affairs, for doing the research and choosing to team up with Hilinski’s Hope for this week.

“It’s something that’s real in this life," Freeze said. "The worst thing for young men or young women is to be battling something like that and to feel like you’re all alone and have no one to talk to about it. We try to bring awareness to it often.”

The first media timeout of Saturday’s game gave Liberty a chance to honor and welcome back a handful of the 154 students who were part of Lynchburg Baptist College’s inaugural class in 1971.

Those former students were spread out around Williams Stadium and were unable to be individually recognized.

Flames quarterback Malik Willis earlier this week voiced his thanks for those students who chose to attend a university in its early years.

“I appreciate them building that foundation for us, giving us a place to call home and we can go out there and play for the glory of God,” Willis said. “It’s just amazing to think there’s a university out here where you can do something like that. Me coming from another university, a lot of people weren't focused on that, so it was really cool to have a place that you could focus on that and make that your main goal. I just want to thank them.”

DENTON, Texas — Liberty star quarterback Malik Willis was transported to a nearby medical facility after suffering a left foot injury in the s…

McCaw: Liberty in a good situation with FBS independence, but monitoring conference realignment

For now, independence appears to be Liberty’s future, even with the Flames still in the exploratory process of evaluating a conference home.

Malik Willis went from being unable to put any pressure on his left foot to scrambling around, finding open receivers and helping Liberty get into the end zone in a dramatic victory at North Texas.

There is a new face among the Associated Press Top 25 pollsters for this college football season.

JaVon Scruggs was exhausted. The Liberty safety felt like he played an eternity in the blazing sun on the Apogee Stadium turf. Then he looked at the stat sheet and realized why it felt like an eternity: The Flames’ defense was on the field for 95 plays.

Scruggs, Liberty defense ready to lock in and execute at North Texas

Liberty coaches still 'sick' and 'upset' after loss to ULM

Malik Willis’ contagious smile he typically flashes during practices has been replaced by a laser-focused look.

Liberty veteran offensive line playing with a chip on its shoulder

Momentum was squarely on Liberty’s sideline late in the first quarter against Louisiana-Monroe. Skyler Thomas returned a blocked field goal to…