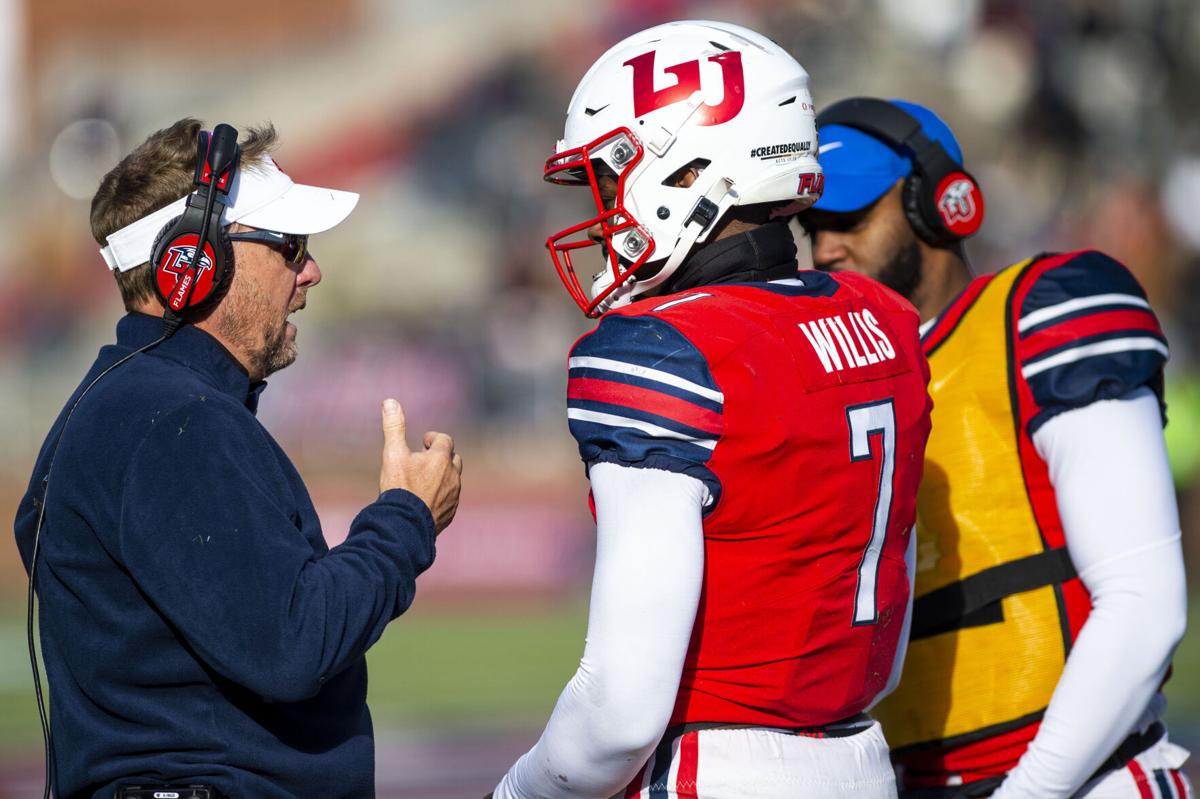 Liberty coach Hugh Freeze speaks with quarterback Malik Willis between quarters during a game against Army at Williams Stadium on Saturday. 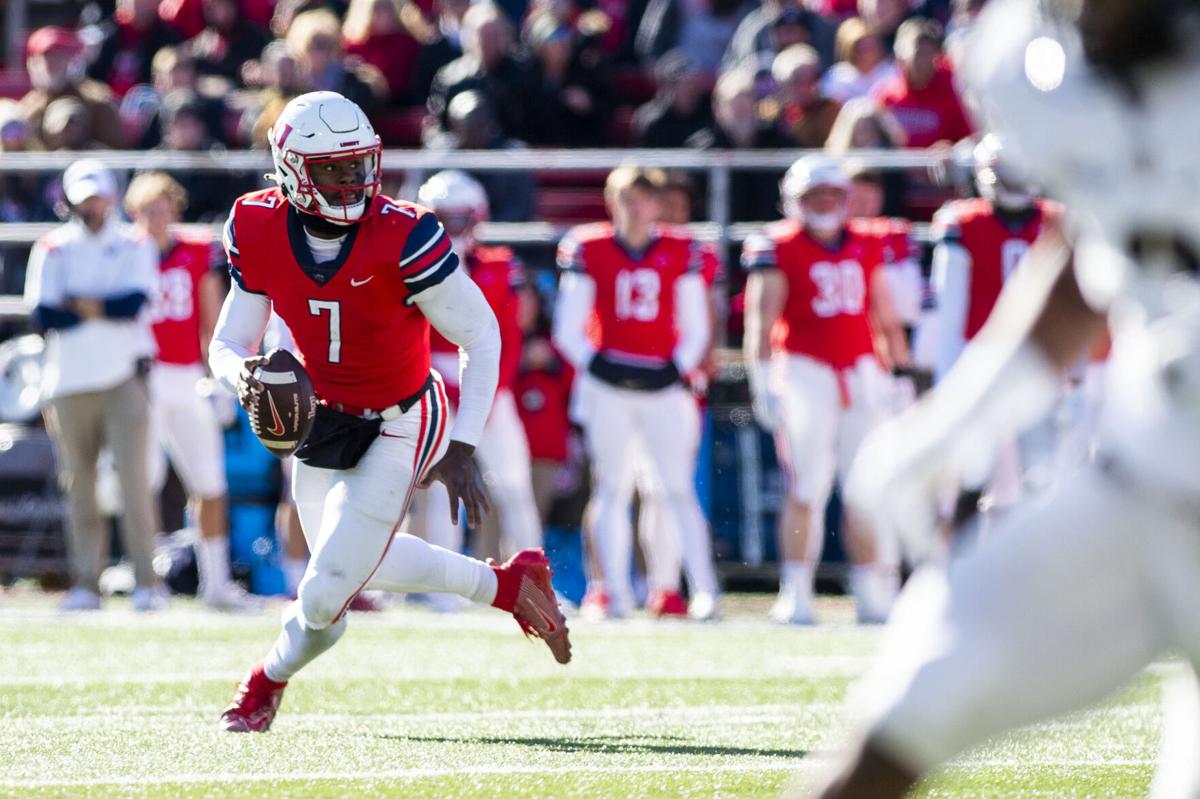 Liberty quarterback Malik Willis scrambles while looking to pass during a game against Army at Williams Stadium on Saturday.

The loudest ovation during the Senior Day festivities came for the 25th and final player. As soon as Malik Willis’ name was announced, Liberty fans stood and applauded the quarterback who has delivered electric moments for two seasons at Williams Stadium.

Willis is working on his MBA and elected to participate in Senior Day with his family members in attendance. He has not publicly announced whether he is entering the NFL Draft or returning for his final season of eligibility.

“I haven’t really thought about it,” he said this week.

While Willis said he hasn’t thought about the future, that hasn’t stopped NFL Draft analysts from projecting Willis as a first-round selection and one of the first quarterbacks to come off the board.

The NFL Mock Draft Database compiled 78 big boards from various websites, and Willis currently is projected as the 10th overall pick. He is the 20th-best draft-eligible player.

“He’s brought a lot of excitement with the other seniors and players that have helped make this program more relevant. It’s not just him, but obviously watching a talent like that, that doesn’t happen all the time,” Liberty coach Hugh Freeze said of Willis. “We certainly hope to recruit some more that are like him so that we can continue winning and going to bowl games and ultimately winning a conference championship in a few years, but in the meantime, I sure hope that all of our people and fans send our seniors out with great gratitude. Malik’s a big part of that for sure, and he’s a special talent.”

Willis threw his only interception of the game late in the fourth quarter to end the Flames' final drive. That is where frustration boiled over and turned into a skirmish in front of the Army bench.

Willis was assessed a 15-yard unsportsmanlike penalty for taking his helmet off, and center Thomas Sargeant was flagged for unnecessary roughness.

Willis was upset over Army's Chris Frey hitting him near the helmet after the play was over, which led to players from both sides trading shoves.

"I didn't see any of that. Malik Willis has done so much for this program. It's frustrating to all of us when you don't win," Freeze said. "It would probably be frustrating to you if you were struggling at something that you really want to do well at.

"That's one thing you don't have to question about Malik is how much he cares and how hard he plays. I wish he would play within himself some when pressure is on him like it is, and he doesn't throw off his back foot some. We're all frustrated. I'm frustrated, too."

Scruggs, Chibueze do not play

Liberty was without two important pieces of its defense against Army.

Rover JaVon Scruggs did not play for the first time since the 2019 season with an undisclosed injury, and defensive tackle Henry Chibueze also was ruled out.

“It was powerful,” defensive end TreShaun Clark said of their absences. “They tell us every day, next man up. You have to be prepared to back up the person in front of you.

“Everybody should be able to do the exact same thing as the person in front of them, and that’s why they’re able to put us in there and be confident that without Scruggs or without Bueze, we can still be a dominant defense. I feel like we did show that. We just weren’t focused enough.”

Scruggs, an Appomattox native, did not play in the second half of last week’s loss to No. 23 Louisiana. He participated in the coin toss as one of the three captains and was on the sideline with the team.

Benjamin Alexander started in Scruggs’ spot at rover, while Kendy Charles filled in for Chibueze as the fifth starting defensive lineman.

Different face on the sideline

Defensive coordinator Scott Symons spends the games in the coaches’ booth to give him a better perspective of how the opposing offenses are lining up.

He elected to spend Saturday’s game against Army on the sideline. That moved defensive line coach Josh Aldridge up into the booth.

Willis scored on a 7-yard touchdown with 19 seconds left in the third quarter to cut the Flames’ deficit to 31-16. Many expected an extra-point attempt to make it a 14-point game heading into the fourth quarter.

Freeze kept the offense on the field. Willis was stopped on the two-point run attempt, and the Flames entered the final 15 minutes trailing by 15.

“Analytics said, it tries to put you in a position to win the game in regulation instead of overtime. After we didn't make the two-point conversion, it didn't feel like the right thing,” Freeze said. “ … I want analytics to explain that a little more to me, but ultimately it's my call. I still wish we had a chance for it to matter or not.”

Liberty lost consecutive games at home for the first time since the 2017 season. The Flames lost to Saint Francis and Kennesaw State in their final FCS season. … Liberty finished the regular season with 3,020 passing yards and 2,123 rushing yards. It is the first time since 2014 the Flames eclipsed 3,000 passing yards and 2,000 rushing yards in the same season. … The Flames' third-straight loss matches their longest at the FBS level. They lost three consecutive games, all on the road, to UMass, Virginia and Auburn late in the 2018 season.

Army takes advantage of short fields in win over Liberty

Liberty coach Hugh Freeze speaks with quarterback Malik Willis between quarters during a game against Army at Williams Stadium on Saturday.

Liberty quarterback Malik Willis scrambles while looking to pass during a game against Army at Williams Stadium on Saturday.