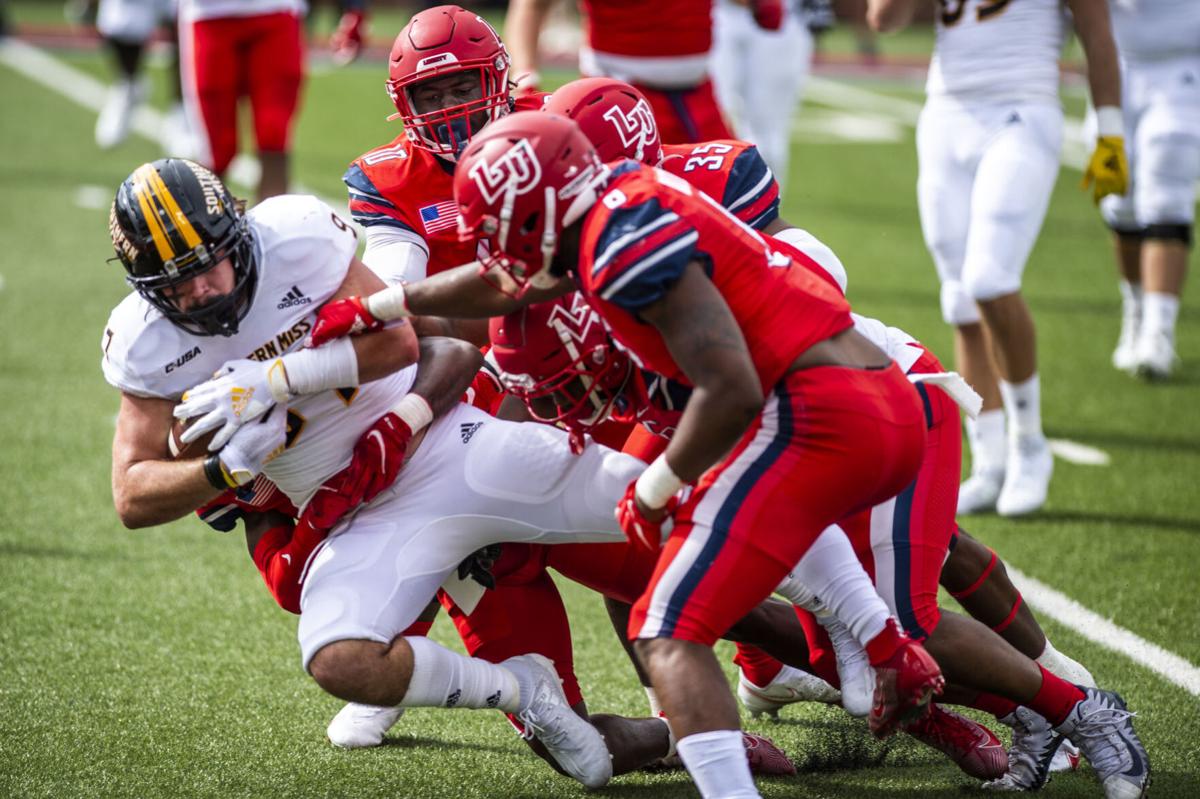 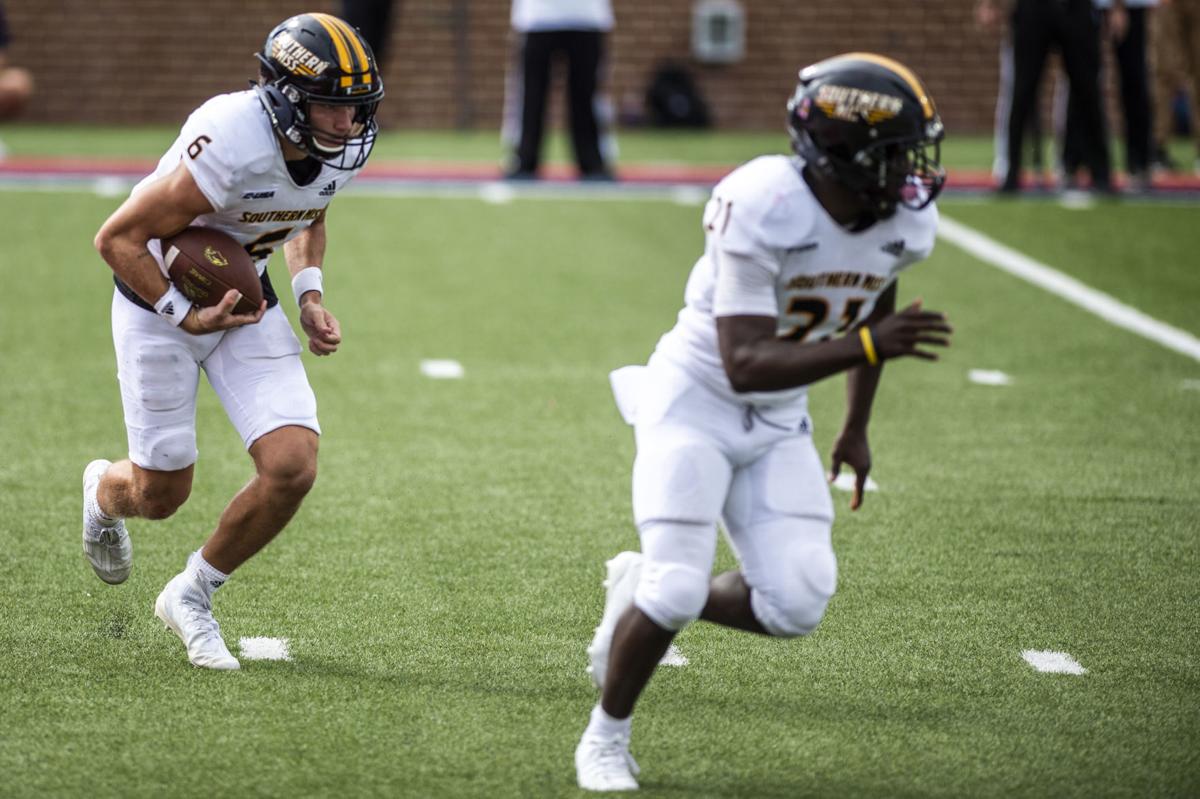 Southern Mississippi quarterback Tate Whatley runs the ball during a game against Liberty University at Williams Stadium in Lynchburg on Saturday, Oct. 24, 2020. 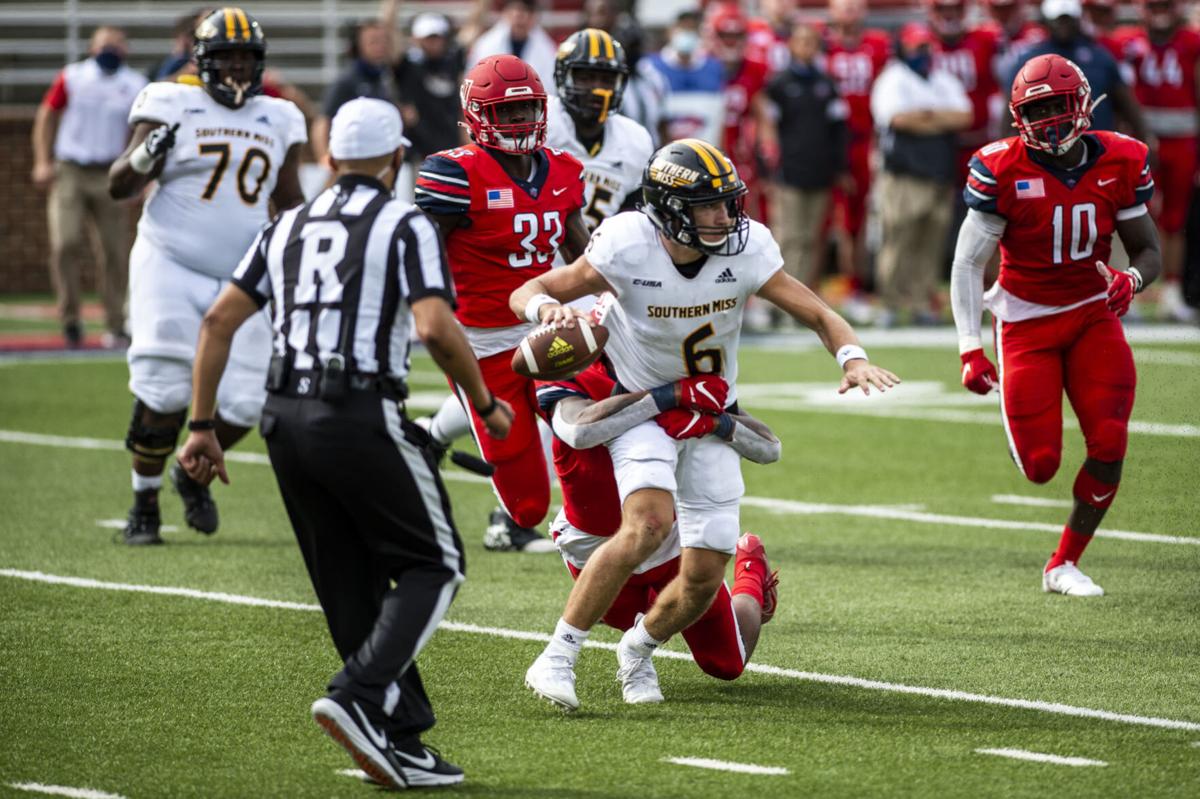 Southern Mississippi quarterback Tate Whatley is taken down by Liberty defensive end Durrell Johnson during a game at Williams Stadium in Lynchburg on Saturday, Oct. 24, 2020.

Liberty linebacker Anthony Butler was going through his pregame ritual when he and his teammates started hearing rumblings about a huge development in Saturday’s game against Southern Miss: Golden Eagles quarterback Jack Abraham didn’t make the trip to Lynchburg.

Tate Whatley, who hadn’t appeared in a game this season, was getting the start.

Butler and defensive end TreShaun Clark both said the Flames prepared for Abraham and Whatley because of the possibility one or the other couldn’t play.

While Whatley was bottled up for most of the first half, he broke through with a big third quarter.

The Southern Miss quarterback ran for three of his four touchdowns in the third quarter to help the Golden Eagles cut a 28-point halftime deficit to one touchdown, but the Liberty defense clamped down and held serve the rest of the way in a 56-35 victory at Williams Stadium.

“It did take a while for us to start getting that consistent pressure because we were preparing just to beat them around the edge, and he wasn’t dropping as deep as the other quarterback would have,” Clark said. He had seven tackles and the Flames’ lone sack. “We had to really step into our element and really focus on our rushes.”

The Eagles were aided by Liberty losing a fumble and failing to recover a USM onside kick.

“I don’t think it would have been 35 without the fumble and onside kick,” Flames coach Hugh Freeze said.

The Liberty defense, though, took over after the once comfortable lead was cut to one score.

The Flames (6-0) forced a punt, Jimmy Faulks came up with an interception, and the defense forced two turnovers on downs to allow the offense to score three more times and pull away.

Whatley rushed for 52 yards and completed 15 of 26 passes for 188 yards and a fourth-quarter touchdown to Jason Brownlee (five catches, 114 yards).

“It was the same offense and I thought he threw it really well and played well,” Freeze said of Whatley. “It really didn’t change a whole lot because they were so similar.”

Mack scores in return to rotation

Liberty redshirt senior Joshua Mack, who didn’t play last week at Syracuse because of an infection in his right elbow, carried the ball nine times for 17 yards as quarterback Malik Willis and running back Shedro Louis handled most of the responsibilities on the ground.

Mack, though, found the end zone on a 1-yard run with 1:27 remaining in the fourth quarter for his first rushing touchdown since Sept. 26 against FIU.

He didn’t flash the same decisiveness on his runs Saturday after being limited in practice because of swelling in his elbow. He wore a white protective sleeve against Southern Miss.

“He looks like he hasn’t practiced in two weeks. It hasn’t been quite two weeks, but he sure doesn’t look like himself,” Freeze said. Hopefully we can get him back to normal in this off week.”

Faulks comes up big filling in for Dabney

Liberty cornerback Emanuel Dabney suffered a right knee injury on the third play of the game. He was going up to defend a pass to Brownlee when he planted his knee into the Williams Stadium turf and it did not give as he fell to the ground.

Dabney did not return, opening the door for Jimmy Faulks to play his most snaps this season.

Faulks recorded a fourth- quarter interception — his first in more than a year — and helped the Flames’ secondary slow down Southern Miss’ passing attack.

Freeze did not have an update on Dabney’s status after the game, but praised Faulks for his ability, as a redshirt senior, to not be dejected over a lack of playing time this season with Dabney and Chris Megginson (Heritage) shining as starters.

Faulks and Freeze shared a laugh on the sidelines after his interception.

Freshman defensive end Stephen Sings was ejected for targeting on Whatley’s touchdown pass to Brownlee with 18 seconds remaining in the fourth quarter. He will miss the first half at Virginia Tech on Nov. 7. “It’s a loss. We’re going to need everybody plus some to go into Blacksburg and I sure hate it that it’s that way,” Freeze said. … Wide receiver CJ Yarbrough (shoulder) played sparingly and had one catch for 14 yards. Noah Frith (hamstring) did not play for the fourth straight week. Javian Lofton (partially torn PCL) also did not play. The Flames’ open week could help get them back before the matchup with the Hokies. “I think we’ll be close to getting most everybody back,” Freeze said. … Butler led the Flames with 11 tackles.

Malik Willis threw six touchdown passes, added a seventh score on a lengthy rushing touchdown that helped put the game away in the fourth quarter, and Liberty remained undefeated by beating Southern Miss.

Southern Mississippi quarterback Tate Whatley runs the ball during a game against Liberty University at Williams Stadium in Lynchburg on Saturday, Oct. 24, 2020.

Southern Mississippi quarterback Tate Whatley is taken down by Liberty defensive end Durrell Johnson during a game at Williams Stadium in Lynchburg on Saturday, Oct. 24, 2020.