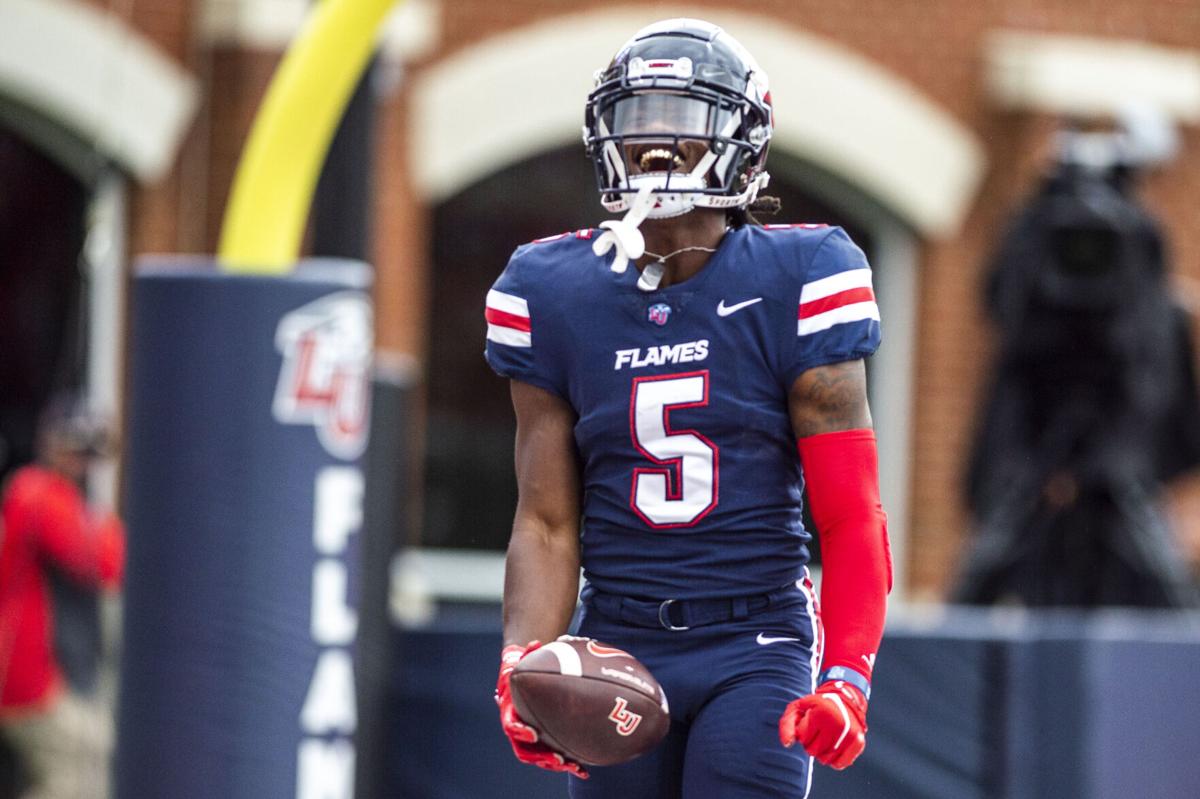 Liberty wide receiver DJ Stubbs enjoys a touchdown against UMass at Williams Stadium on Oct. 30. Stubbs is six receptions from 150 in his career. 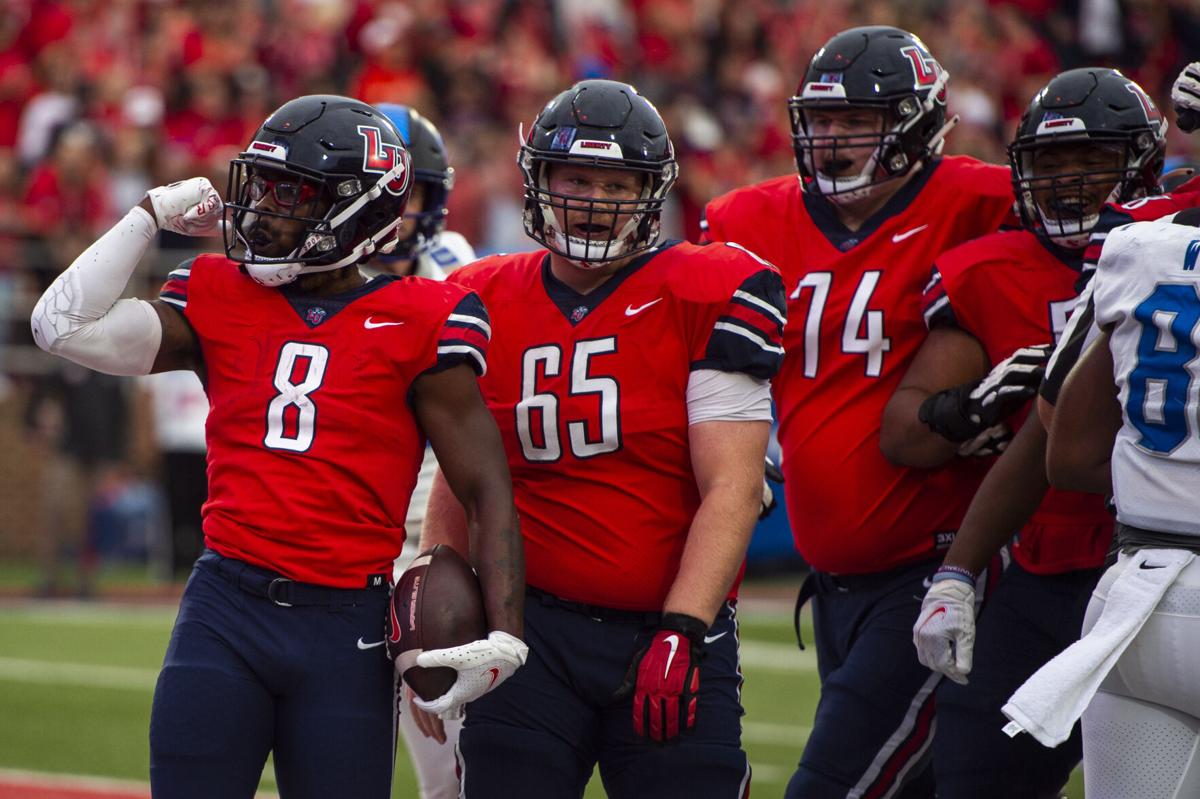 Liberty running back Joshua Mack celebrates a touchdown with center Thomas Sargeant (65), right tackle Bryce Mathews (74) and left guard Damian Bounds during an Oct. 9 game against Middle Tennessee at Williams Stadium. All four super seniors will be honored during Senior Day in the Flames’ regular-season finale Saturday against Army. 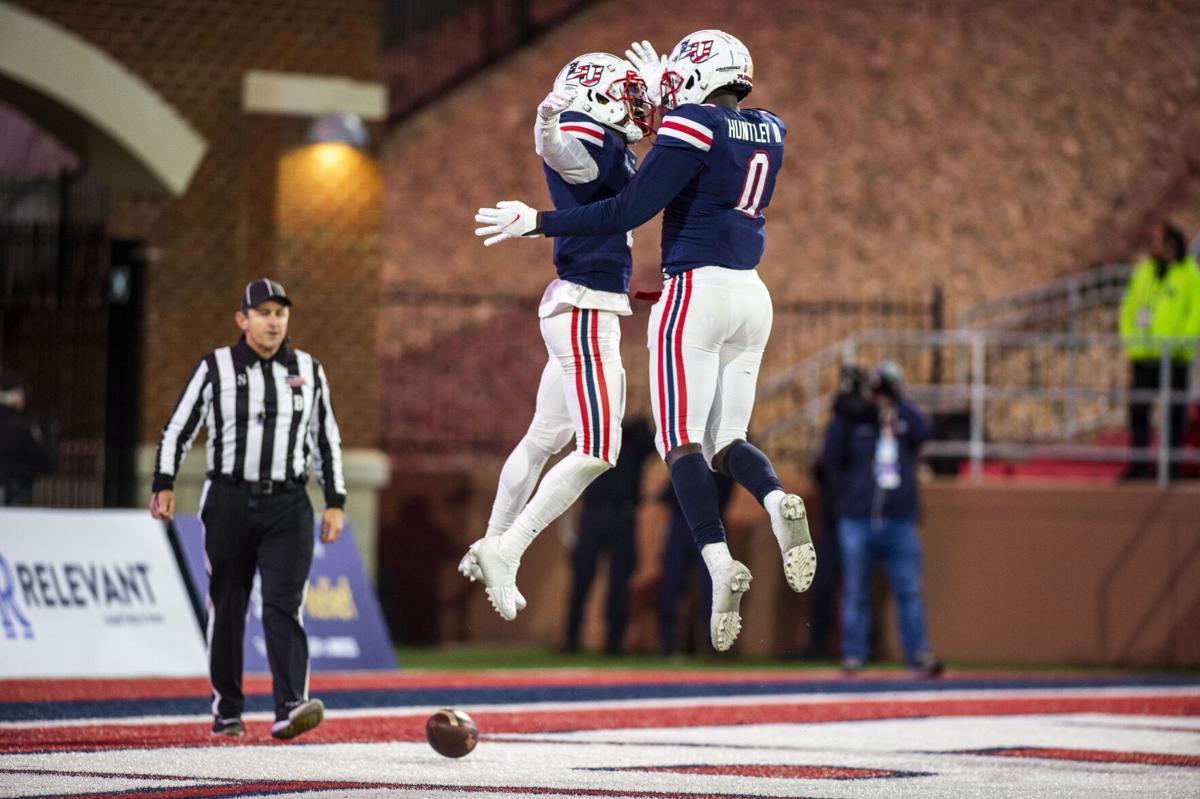 Liberty tight end Johnny Huntley (right) and wide receiver Kevin Shaa celebrate after a touchdown from Shaa during a game against Louisiana this past weekend at Williams Stadium. Huntley and Shaa will be honored during Saturday's Senior Day festivities prior to the regular-season finale against Army.

Ralfs Rusins has spent the past three regular-season home finales thinking he was going to participate in Senior Day. The first time that happened was in 2018, and the Liberty nose guard was told he had one more season.

It happened again in 2019. Then a third time in 2020 when the NCAA allowed each player to receive an extra year of eligibility because of the coronavirus pandemic.

Now, it’s finally setting in for Rusins that this is finally the moment he will play in his final game at Williams Stadium.

“This time I don’t think it’s going to be like that,” Rusins said. “The feeling hasn’t come to me yet, hasn’t set in yet, that this is the last one. I think closer to Saturday and after Saturday it will slowly set in, and kind of exciting but also kind of a sad moment for me.”

Rusins, one of 20 seventh-year seniors in the Football Bowl Subdivision this season, will be joined by 24 other seniors and super seniors at Liberty who will be honored prior to Saturday’s noon kickoff against Army.

Rusins and fellow super seniors Benjamin Alexander, Damian Bounds, Thomas Sargeant, Tristan Schultz and DJ Stubbs have been with the program since the Flames (7-4) were members of the Big South Conference in the Football Championship Subdivision. They have been described as instrumental in helping the program transition to the FBS ranks.

Liberty has won at least six games in every season since 2017 and is the third current FBS team to become bowl eligible in each of its first three seasons in the top-tier subdivision. Marshall and Appalachian State are the others.

“These seniors have really made this program relevant. It’s going to be sad to say goodbye to a lot of those guys,” Liberty coach Hugh Freeze said. “They deserve to go out the right way, and hopefully everyone in this building understands that and will prepare accordingly to play a really good football team in Army.”

Those established super seniors are joined by 11 others who elected to use the extra year of eligibility because of the pandemic (Rashaad Harding, Trevor Hobbs, Johnny Huntley, Storey Jackson, Elijah James, Duron Lowe, Joshua Mack, Bryce Mathews, Kevin Shaa, Cedric Stone and Skyler Thomas), as well as other seniors who have not played as much in recent seasons, such as running backs Frank Boyd and Tyron Staples (Liberty High in Bedford).

The biggest super senior impact has come on the offensive line, with three players who have been mainstays up front since the Flames’ final season in the FCS ranks.

Sargeant has started 58 consecutive games at center, which is the fourth-longest streak in the nation behind a trio of players (Syracuse’s Airon Servais, Coastal Carolina’s Trey Carter and Boston College’s Pen Petrula) who have started in 59 straight games.

Schultz has made 45 starts at left and right tackle, while Bounds has started in 22 of the 52 games he has played at left guard.

“I’m definitely trying to make the most out of them,” said Sargeant, who has started every game at center since the 2017 opener at Baylor. “Coach [Ed] Gomes sent out a text to me the other day. It basically said don’t count the days, make the days count. That’s something I’m trying to take advantage of. I’m trying to be grateful for every day that I have here left. It’s been long. You start to think about it as your time comes to an end, but I’m grateful to have had the career that I’ve had here.

“Just taking advantage of every opportunity I have.”

Sargeant and Alexander are the only two super seniors from the FCS days that joined Liberty as walk-ons and earned their way to scholarships. Sargeant has been the only starting center the Flames have known in the FBS era, while Alexander used a breakout 2019 campaign that featured him prominently making plays in the Cure Bowl to get onto scholarship.

Rusins admitted he felt like walking away from the sport in 2018 because he wasn’t being properly utilized, and the new coaching staff revitalized his career.

“He’s helped be a cornerstone in building this,” defensive coordinator Scott Symons said of Rusins.

Alexander, a safety, also wanted to stop playing before earning his opportunity.

“It’s been a wild ride. I can’t take any of that credit. That’s all God. There’s a time where I wanted to give up, but my parents are like, ‘Don’t do it, don’t do it. You’ve worked too hard for this,’” Alexander said. “I just kept trusting that the opportunity would present itself, and it did. That’s all glory to God. I’m just waiting for my moment, you know. Taking a backup role and what not and earning my way up and then being able to contribute and help these guys and help everyone win, it’s just a blessing.”

Stubbs, the lone wide receiver among the group of former FCS recruits, has played in 56 of 58 games since the beginning of 2017. He is six receptions away from 150 for his career.

Brown’s gritty play, especially on defense, has helped Liberty open the season with the program’s best start since the 1997-98 campaign. The Flames’ strong start will be challenged at 4 p.m. Saturday when they face Florida Gulf Coast.

Liberty wide receiver DJ Stubbs enjoys a touchdown against UMass at Williams Stadium on Oct. 30. Stubbs is six receptions from 150 in his career.

Liberty running back Joshua Mack celebrates a touchdown with center Thomas Sargeant (65), right tackle Bryce Mathews (74) and left guard Damian Bounds during an Oct. 9 game against Middle Tennessee at Williams Stadium. All four super seniors will be honored during Senior Day in the Flames’ regular-season finale Saturday against Army.

Liberty tight end Johnny Huntley (right) and wide receiver Kevin Shaa celebrate after a touchdown from Shaa during a game against Louisiana this past weekend at Williams Stadium. Huntley and Shaa will be honored during Saturday's Senior Day festivities prior to the regular-season finale against Army.