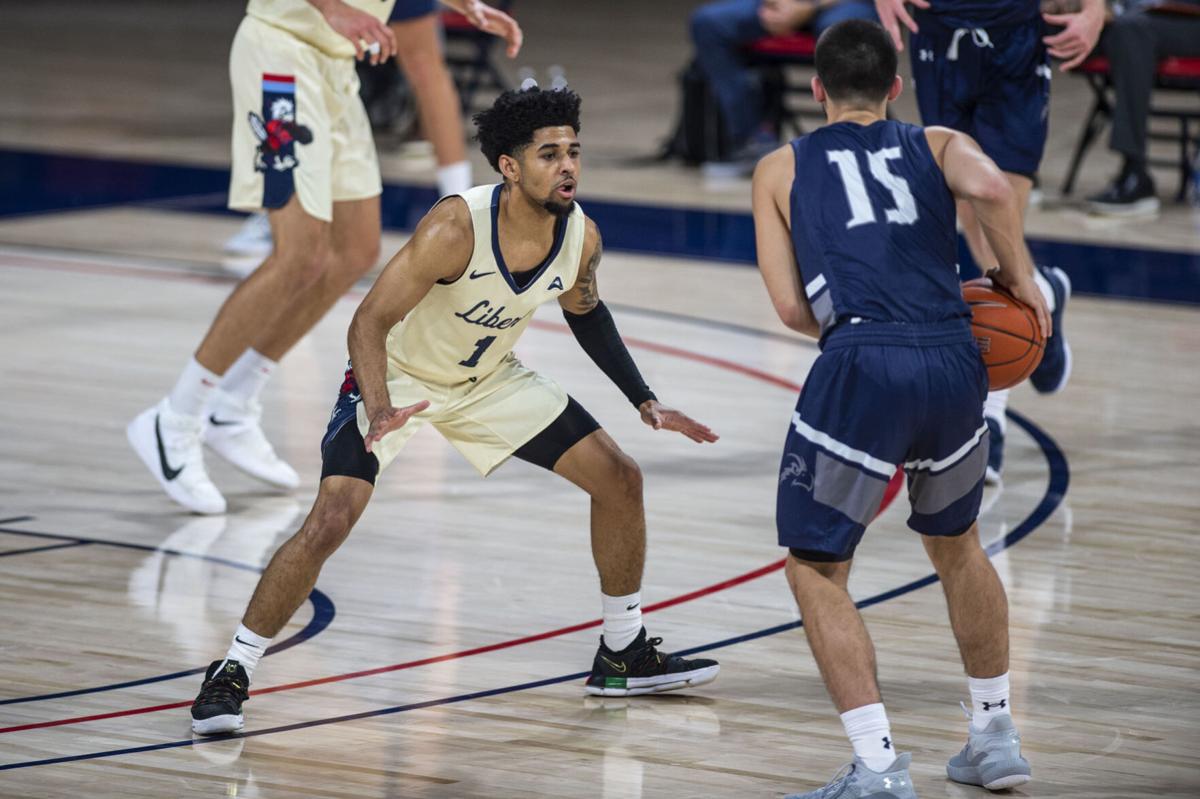 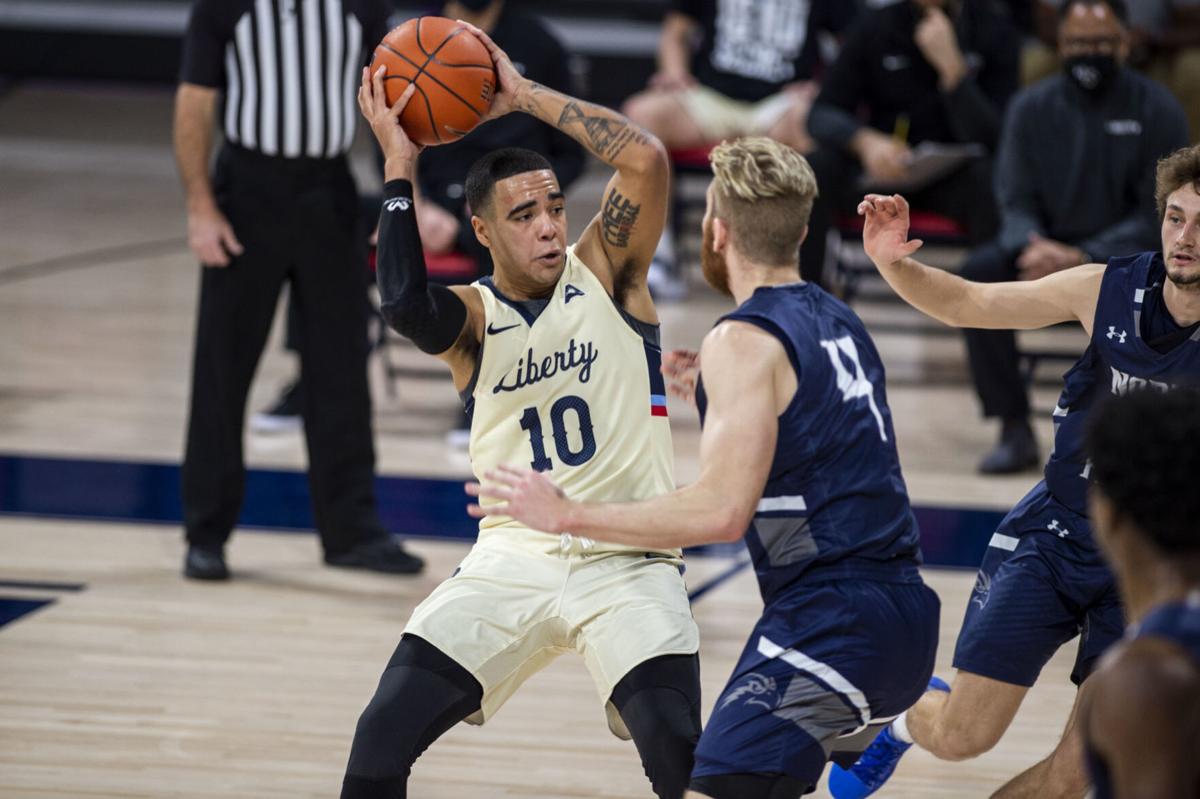 Liberty University forward Elijah Cuffee protects the ball from a defender during a game against North Florida University in Liberty Arena on Friday, Feb. 12, 2021. 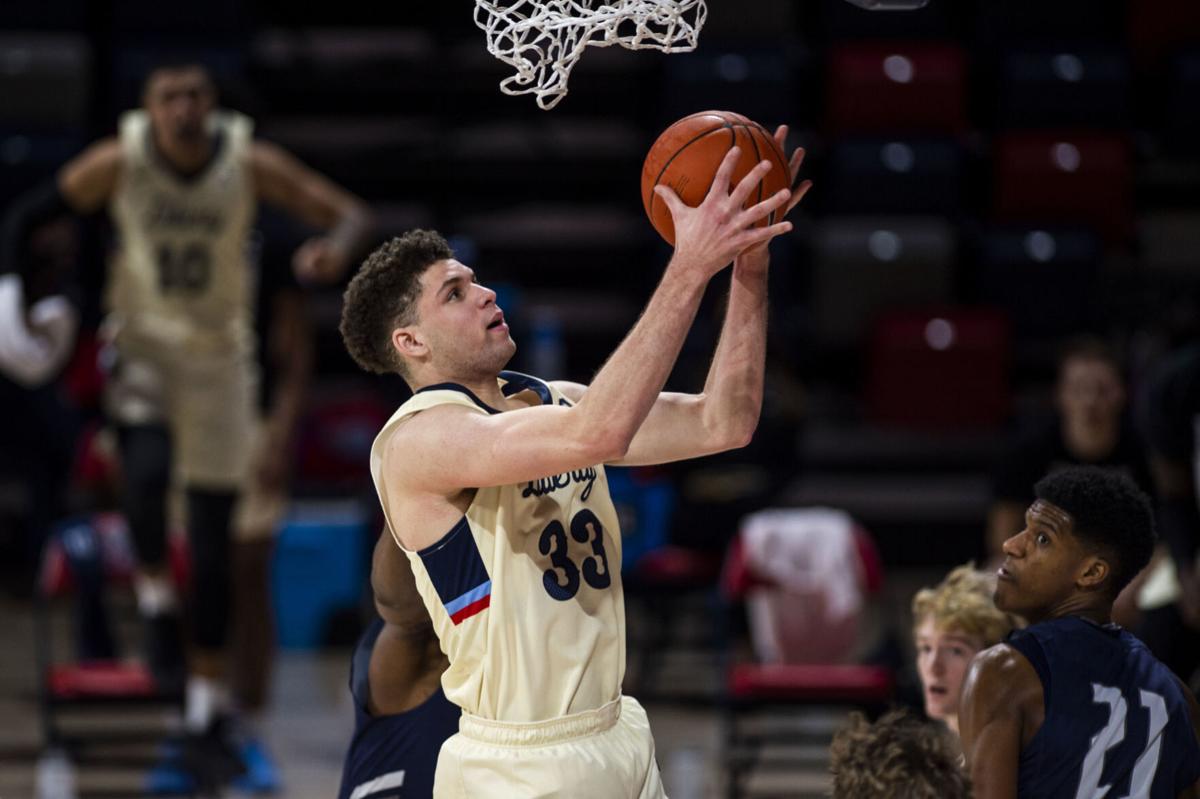 Liberty University forward Shiloh Robinson goes up for a shot during a game against North Florida University in Liberty Arena on Friday, Feb. 12, 2021.

Chris Parker didn’t experience the traditional recruiting process a little less than a year ago. The point guard, who was finishing up his studies at Henderson State and looking to go to a Division I program as a graduate transfer, had to rely on virtual campus tours and video clips sent to him by the coaching staffs.

Liberty, in addition to the virtual tours, made sure Parker was inundated with videos to simulate the experience of playing games in Lynchburg. The Flames finished the 2019-20 season with one of the nation’s longest home winning streaks, and they wanted Parker to see the advantages of playing in front of a raucous crowd.

“Just looking at the old tapes and the videos they sent me while they were recruiting me, I could see that’s one reason, for sure, is that the crowd was probably overwhelming for a lot of teams,” Parker recalled late last week.

Parker and the Flames haven’t played in front of a capacity crowd at Liberty Arena this season. Liberty, like every college program in Virginia, is limited to 250 fans for home games.

The lack of energy created by the screams and jeers of a home crowd hasn’t impacted Liberty in the 2020-21 season that has been defined by the coronavirus pandemic.

The Flames entered their home series against North Alabama today and Tuesday with the nation’s second-longest home winning streak. Liberty (17-5, 8-2 ASUN Conference) has won 34 straight at home and aims to extend that mark in its final games at Liberty Arena this season.

“To do it in this climate where the max is 250, and 34 wins in a row at home, that may not ever get accomplished again,” Flames coach Ritchie McKay said. “I try to take each game as its own entity because of my competitiveness; I just want to win the next game. I don’t think it has anything to do with the game at hand, but I will look back on it one day and shake my head. That’s quite an accomplishment, especially with what was on the line last year.”

Liberty’s winning streak included a perfect 17-0 mark inside the Vines Center last season. The final three triumphs came in the ASUN Conference tournament, in which the Flames overcame lackluster performances against NJIT and Stetson to rout Lipscomb in the title game.

Liberty is 11-0 inside Liberty Arena this season, and its home winning streak is second to Gonzaga’s 49 straight triumphs inside McCarthey Athletic Center.

“I’m really proud of our group,” McKay said. “I think it’s not to be celebrated when it’s going on because the more attention you bring to it, the more fuel you’ll add to the opponent’s fire, but I do feel like it’s something that we’ll appreciate long after it’s over.”

In the 34 home games that have followed, Liberty has allowed more than 70 points only once — an 82-77 victory over North Florida on Feb. 20, 2020 — and won all five ASUN tournament games.

“I would just say our program and how we do things — being defensive and knowing that when people come here, they’re going to have to play against us defensively,” senior guard Elijah Cuffee said. “Then they’ve got to play on the rim that we shoot on a lot. It’s just a comfort of playing offensively, and then taking that defensive mentality with us. It’s not anything we’re worried about like we’ve got to win at home. It’s just us going out there and playing, and it’s worked out for us.”

The Flames have shared two straight ASUN regular-season titles and won both conference tournament crowns since joining the league prior to the 2018-19 season.

Liberty’s ability to defend its home court — it is 44-1 at home since joining the ASUN — has been a key factor in the success the Flames have enjoyed in the new league.

Parker saw that mentality in every video the coaching staff sent him, and he’s been able to experience it first-hand this season, even with a limited number of fans allowed inside the new $65 million Liberty Arena.

“I just think the way that we play defense. Everybody’s locked in, and then at home, I think it’s just easier because it’s comfortable,” he said.

“We practice here day in and day out. I think everybody here takes pride in just protecting the home court and protecting Liberty and our name.”

McDowell, who nearly left Liberty basketball program, shining off the bench for Flames

It is a scene that has unfolded many times this season for Liberty. Keegan McDowell, fresh off the bench, provides a spark. He curls off scree…

Darius McGhee shot a blistering 12 of 18 from the field and 8 of 11 from 3-point range against the Knights.

Liberty football notes: Flames' roster 'deeper than we've ever been,' plus notes on position changes and staff moves

Hugh Freeze spent a good portion of Monday’s spring practice looking around at the number of players dressed out in Liberty apparel. The Flame…

Emily Lytle tallied four of her six 3-pointers in the third quarter and scored a game-high 22 points as Liberty rallied to defeat Stetson.

Brady Gulakowski gave Liberty the lead for good with a two-run home run in the second inning, then added an insurance run with an RBI double i…

Cuffee has been a constant in the starting lineup for the past three seasons.

Mathieu clubbed a two-run home run in the second inning that opened the floodgates for Liberty's 16-2 shellacking of North Carolina A&T in Liberty’s home opener.

"It's just this season": Liberty's remaining ASUN schedule in flux because of weather, COVID

All of that control and ability to navigate through a normal campaign has been thrown out the window in 2020-21.

Liberty University forward Elijah Cuffee protects the ball from a defender during a game against North Florida University in Liberty Arena on Friday, Feb. 12, 2021.

Liberty University forward Shiloh Robinson goes up for a shot during a game against North Florida University in Liberty Arena on Friday, Feb. 12, 2021.