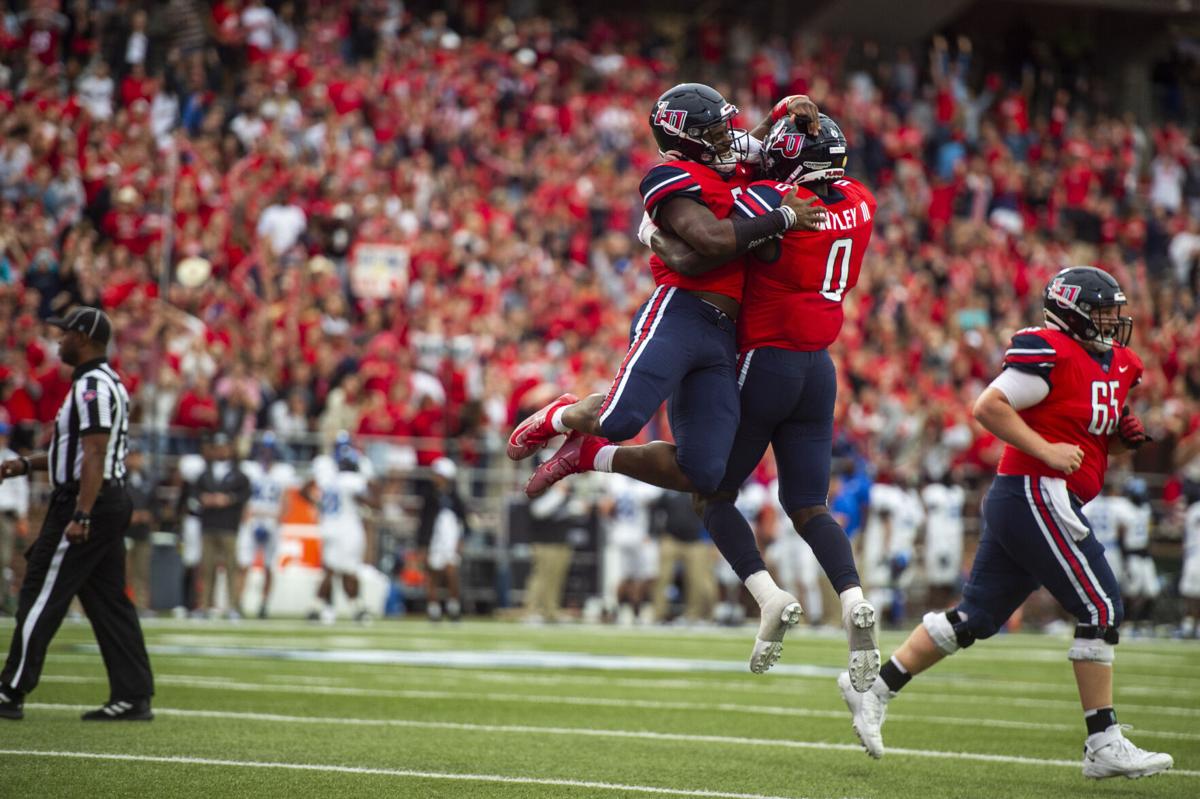 Liberty quarterback Malik Willis and tight end Johnny Huntley III celebrate after a touchdown during a game against Middle Tennessee State at Williams Stadium on Saturday. 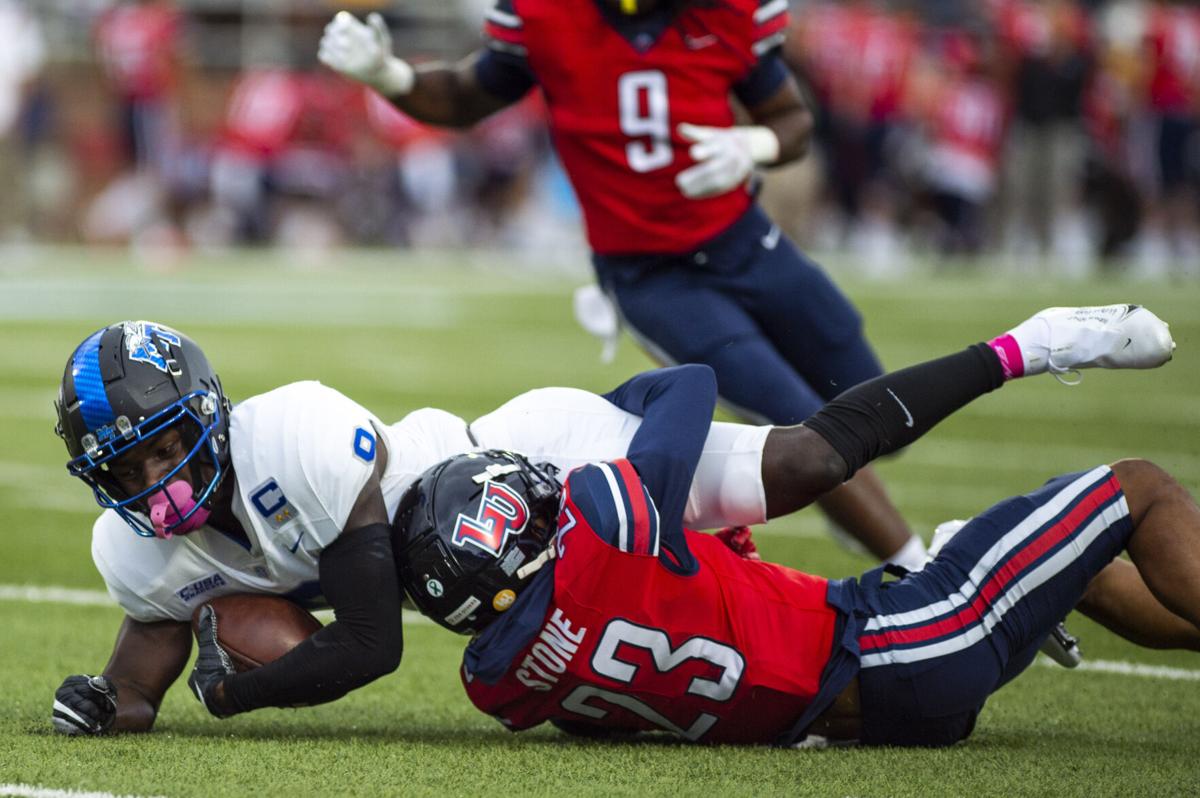 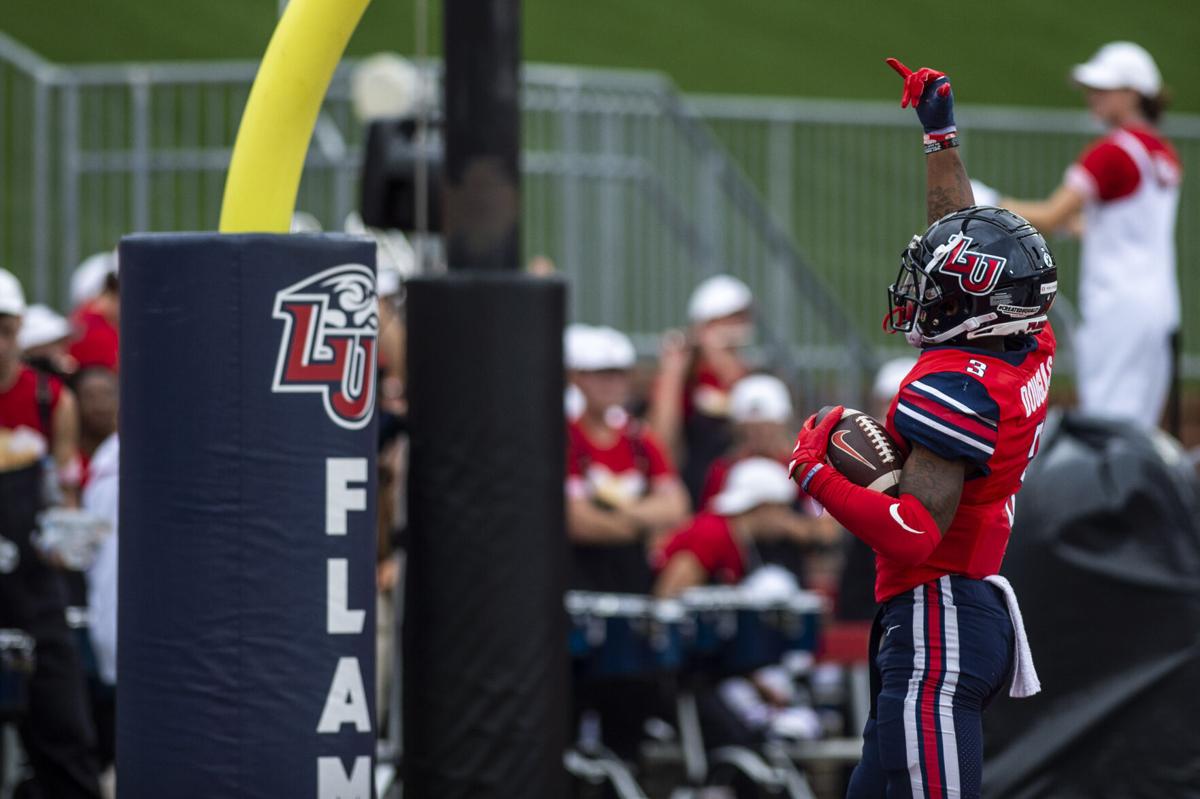 Skyler Thomas and his defensive teammates had a singular message for Malik Willis after he came off the field early in the third quarter: We’ve got your back.

The Liberty defense wasn’t worried about Willis throwing his second interception in as many attempts, or the fact the electric signal caller was picked off for the third time by Middle Tennessee’s opportunistic defense.

The Flames were ready to make another stop and get the ball back in Willis’ hands.

“We’ve got the best player in college football. As a defense, we’ve just got to get the ball in his hands,” Thomas said. “Him being able to be explosive as he is, that just excites the whole defense. His momentum sets us up. All we need to do is put the ball in his hands and he’s going to make us successful.

"It’s great having 7 back there. He’s a great player. I love watching him play.”

Liberty’s defense responded by limiting Middle Tennessee to seven points off those three miscues. Willis, despite the struggles, made the Blue Raiders pay when he was able to maintain possession.

Willis accounted for three touchdowns and delivered more highlight-worthy plays. The defense held its fourth opponent of the season to less than 100 rushing yards. It added up to a 41-13 Homecoming victory before an announced crowd of 19,935 at Williams Stadium.

“I feel like it’s just a testament to them and how into the game they were and how much tenacity they showed,” Willis said of the defense.

Liberty (5-1) made MTSU one-dimensional with a stifling run defense that yielded a meager 35 yards on 21 attempts. The Blue Raiders (2-4, 1-2 Conference USA) were aided by a pair of late runs that helped them top the 30-yard mark.

“They were tougher than us up front,” MTSU coach Rick Stockstill said. “They dominated us.”

It was a dominating performance all the way around for Liberty, which rushed for 227 yards and averaged 5.4 yards per carry.

Joshua Mack, whose carries were limited over the past several weeks, rushed for a season-best 91 yards on 14 attempts, marking the second time this season he has led the team in rushing.

He had a 2-yard touchdown in the third quarter that gave the Flames a 34-13 lead.

T.J. Green added 30 yards and his first rushing touchdown in a Liberty uniform. He scored on a 1-yard plunge with 6:55 left in the second quarter to put the Flames ahead 21-0.

“I was just happy those guys got going,” Willis said.

Willis completed nine of his first 10 passes, but finished 17 of 30 for 222 yards, two touchdowns and three interceptions.

It is the third time he has thrown multiple interceptions in a game at Liberty after it happened twice in 2020. He threw a trio of picks in a one-point loss to North Carolina State and had two interceptions in the Cure Bowl win over Coastal Carolina.

“Those are unacceptable. I’m not happy with my performance, but I’m happy I got to go out there and glorify God and I’m happy we got the W at the end of the day,” Willis said.

“I wasn’t going to fold and get into a little shell. That’s not ideal that I went out there and turned it over three times, but we’ve just got to work on it. We’re going to watch this film and get better from it.”

He got off to a sizzling start with touchdown passes of 35 and 5 yards to DeMario Douglas and Jerome Jackson, respectively, to help Liberty race out to a 14-0 lead at the end of the first quarter.

Douglas caught six passes for a career-high 156 yards. His previous career high was set last week with 128 yards at UAB.

Willis’ third interception led to MTSU cutting the deficit to 26-13 on Chase Cunningham’s 31-yard touchdown pass to Jarrin Pierce with 8:07 left in the third quarter.

That touchdown pass, which came on fourth down, was only the second touchdown allowed by the Flames in the third quarter this season.

“The defense played really, really well. I think they’re playing at a high level, and that’s incredibly good to see because we’re still very inconsistent on offense,” Liberty coach Hugh Freeze said. “Obviously we needed them to play well tonight with us turning the ball over.”

Six players ran the ball for MTSU, and Chaton Mobley led the Blue Raiders with eight yards on four attempts.

Cunningham threw for 230 yards and two touchdowns on 22-of-42 passing.

He was sacked three times. One of his sacks, by Henry Chibueze, resulted in a safety and Liberty taking a 26-7 lead.

“We couldn’t protect [Cunningham],” Stockstill said. “We never got anything established in the run game. We couldn’t block and get anything going from there.”

Liberty quarterback Malik Willis and tight end Johnny Huntley III celebrate after a touchdown during a game against Middle Tennessee State at Williams Stadium on Saturday.