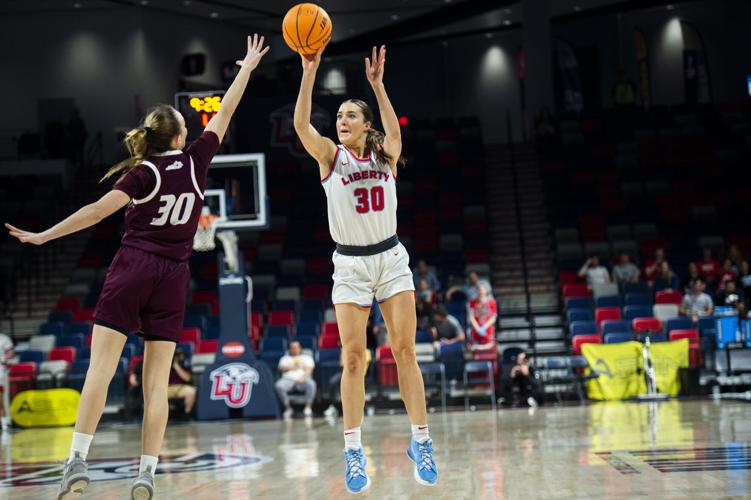 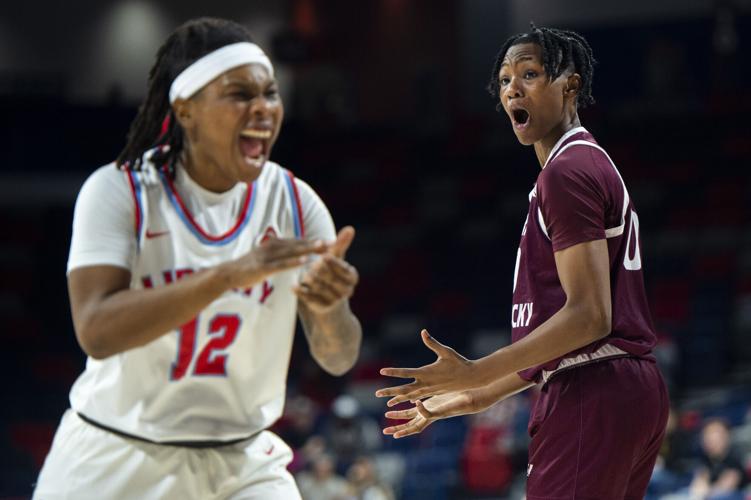 Carey Green wrote a popular phrase on the whiteboard before his Liberty women’s basketball team took the court Sunday afternoon in the ASUN Conference tournament quarterfinal round: “Where focus goes, energy flows.”

The commonly used quote from Tony Robbins carried significance for the Flames. If they focused on the defensive end and made it difficult for Eastern Kentucky to score, energy would be created on the offensive end.

That came to fruition in a big way in a dominating first half that all but sealed another trip to the ASUN semifinals.

Eastern Kentucky did not make a field goal in the second quarter. Liberty’s stingy defense, coupled with Priscilla Smeenge’s hot shooting, allowed the Flames to build a double-digit lead that was never in jeopardy during a 77-57 whipping of the Colonels before an announced crowd of 542 inside Liberty Arena.

The Flames (27-3) advance to the semifinal round and will play at Jacksonville State (23-6) at 7 p.m. Wednesday. The Gamecocks, the No. 1 seed from the West Division, easily defeated Jacksonville, 70-56, in another quarterfinal contest.

Liberty seized control with a dominating first half to build a 37-12 halftime lead.

The Flames shot a blistering 52% from the field while not allowing the Colonels to get into any rhythm on the offensive end.

EKU (15-16) did not make a shot from the field over the final 12 minutes of the first half and missed their final nine attempts as Liberty stretched a 14-7 lead into the comfortable halftime advantage.

“We were so dialed in with our defense early in the game,” Green said. “It sort of set a tempo the way we’re playing defense and rebounding.”

The Colonels were 0 of 7 from the field in the second quarter and scored four points thanks to a pair of free throws from both Bria Bass and Kalissa Lacy.

“We just weren’t making shots. … We normally shoot better than that,” Eastern Kentucky senior forward Jayla Johnson said. “It just wasn’t our night in the first half.”

“I was just telling Coach Green, I was kind of taking everything as it came to me,” Smeenge said. “My teammates did a great job of finding me at the right times. When you’re in March Madness, you really have to be confident and locked in. I think everyone on the team did that from the starters to the bench.”

Lacy led the Colonels with 15 points in 10 minutes off the bench. Johnson had 13 points and six rebounds.

Those two combined for 26 points in the second half as EKU’s offense came to life.

EKU shot 15 for 29 from the field over the final 20 minutes as the game’s pace favored the Colonels’ up-tempo style.

The Colonels had 12 first-half points and scored 11 points in the first 2 ½ minutes of the third quarter.

“More of our inconsistencies have been offensively this year. Typically we’ve played pretty solid defensively, and offensively when we’re attacking the basket, getting to the rim, drawing fouls, we do a better job,” Eastern Kentucky coach Greg Todd said. “Typically we play better in the second half, but a tough first half. Sort of crazy to score 12 points in the first half and then turn around and get 45 points in the second half.”

Liberty matched EKU in the third quarter by shooting 11 of 18 from the field and connecting on 4 of 7 attempts from beyond the arc.

The Flames were shooting 54.3% from the field and 50% from 3-point range before allowing the bench to get most of the playing time in the fourth quarter.

Ten players got into the scoring column for Liberty.

“It was awesome to see that everyone could contribute today,” Smeenge said.

A rundown of the area's news and results from Sunday.

Devyn Howard had to learn to be proactive, instead of reactive, once she transitioned to shortstop in the middle of March. The Liberty infield…

A rundown of the area's news and results from Thursday.

A rundown of Wednesday's college news and results, plus the Hillcats splitting a doubleheader with the Red Sox.

Liberty's Willis falls out of first round in NFL Draft

Malik Willis has to wait until Friday to likely hear his name called in the NFL Draft.