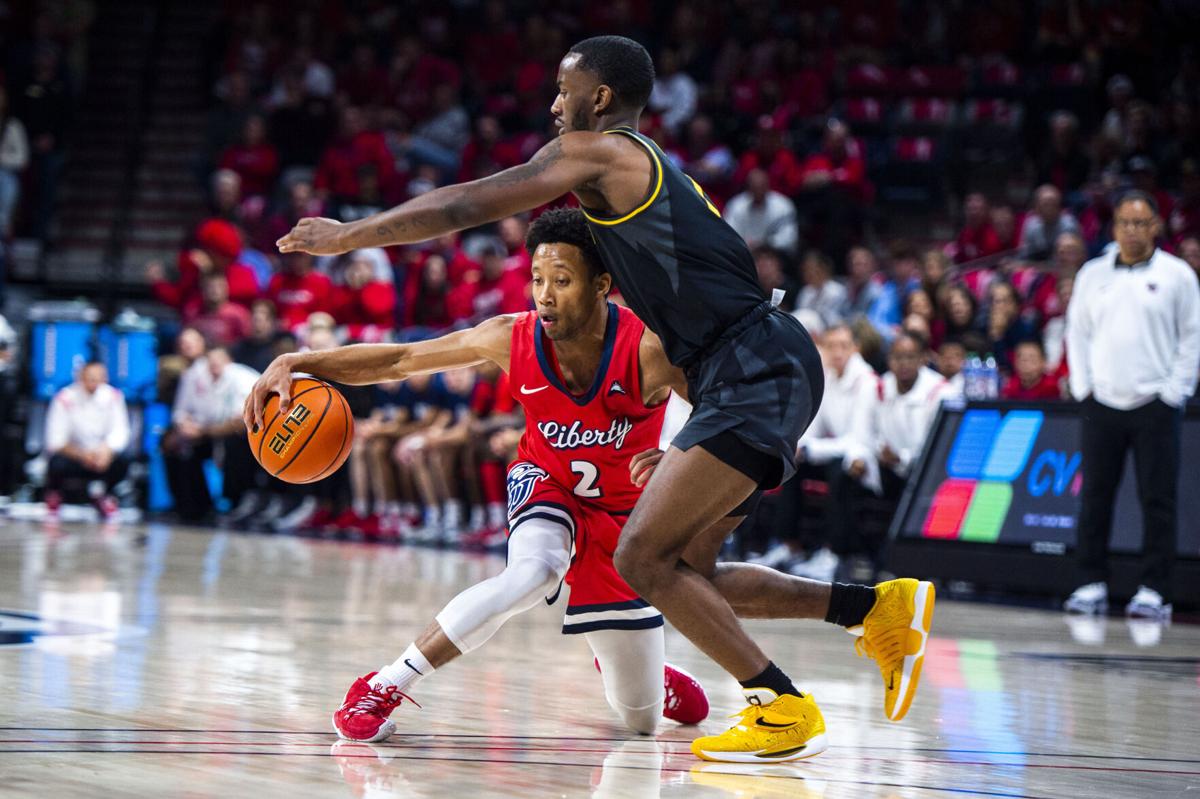 Liberty guard Darius McGhee looks to drive past a Missouri defender during Thursday’s game at Liberty Arena. McGhee scored 20 points in the victory. 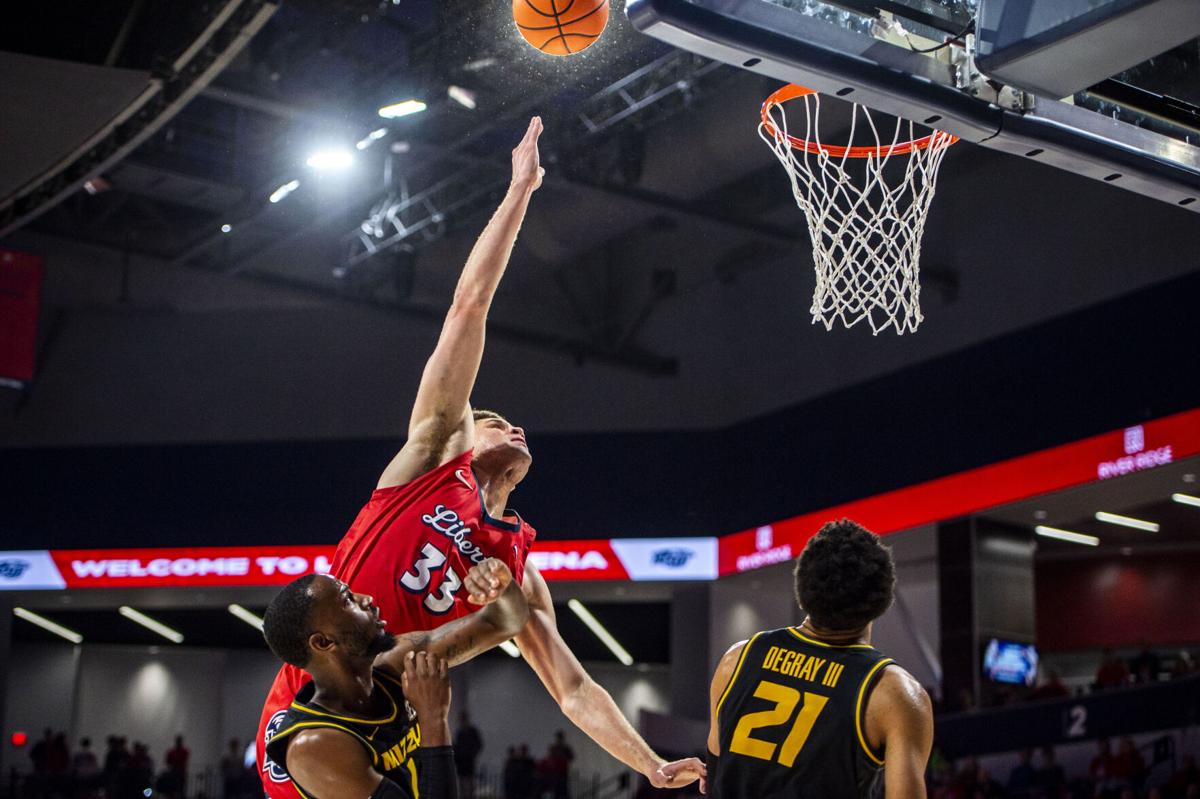 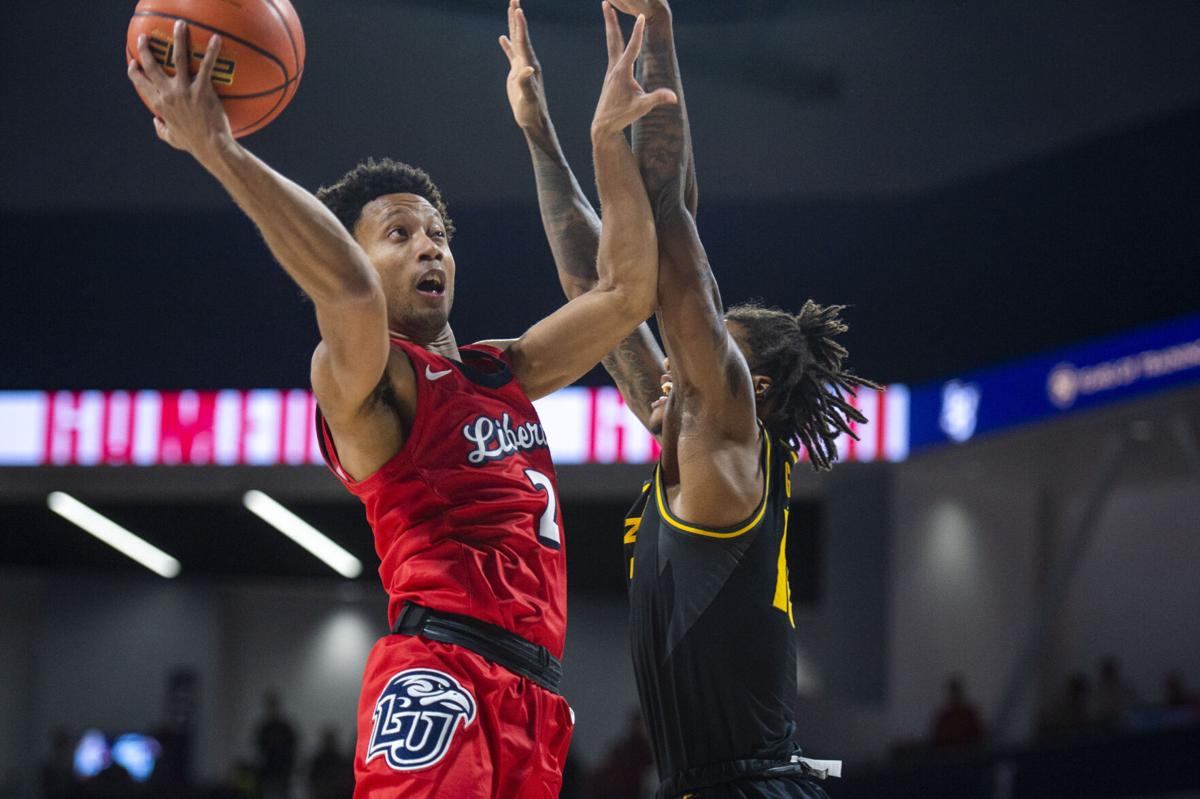 Liberty guard Darius McGhee goes up for a shot against Missouri at Liberty Arena on Thursday. McGhee finished with 20 points. 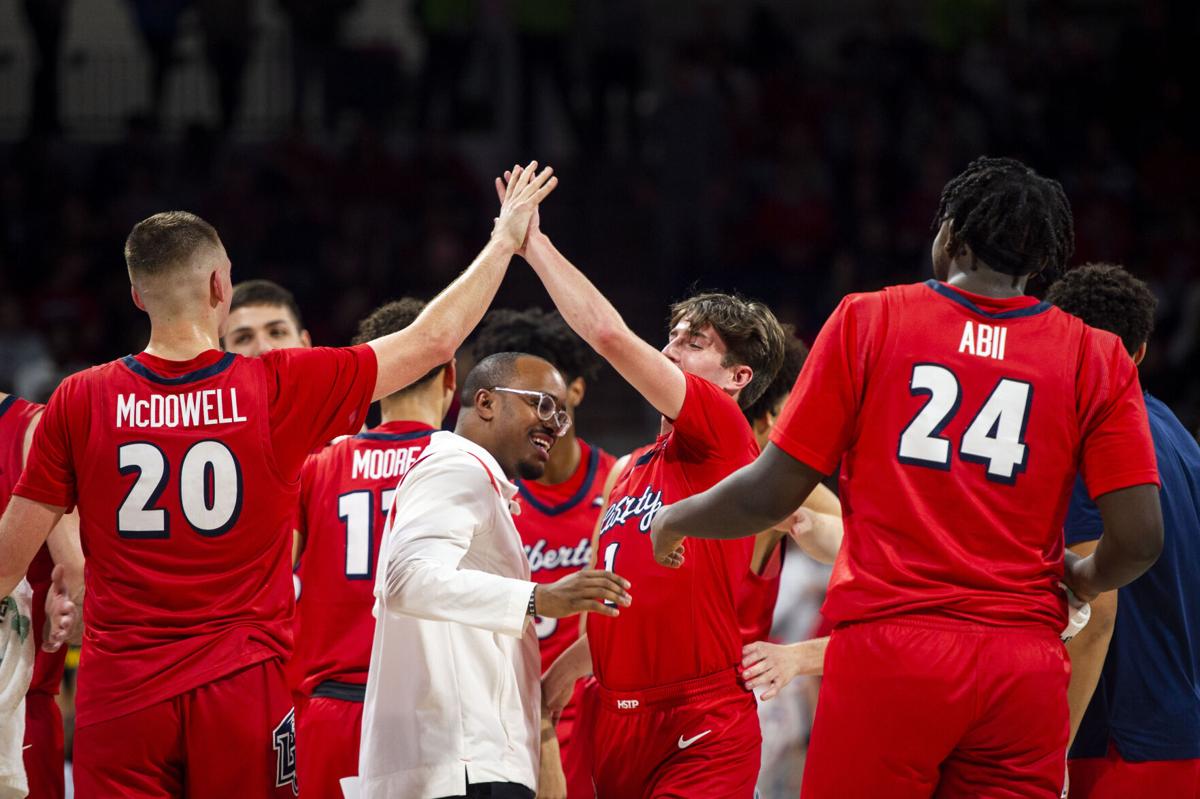 Liberty players high-five as they come off the court during a game against Missouri at Liberty Arena on Thursday, Dec. 2, 2021.

The back-and-forth exchanges expected between the Flames and Tigers after last season’s tussle in Columbia, Missouri? They were nonexistent.

What it turned into was the type of performance many have come to anticipate from Liberty during its dominating three-plus-year run as one of the country’s more consistent mid-major programs.

Liberty suffocated Missouri with a dominating defensive first-half. McGhee led three players in double figures with 20 points. The end result was a 66-45 win over the Tigers before a rowdy, sellout crowd of 4,005.

“They played well,” Missouri coach Cuonzo Martin said. “They got their heads up early, made plays, and we were a step slow and they made big shots early.”

The Flames (4-3) extended the nation’s second-longest home winning streak to 39 games and recorded their first home win over a Power Five program in that stretch.

Liberty improved to 5-5 against SEC teams since the beginning of the 2018-19 season, and those five wins have come in the last eight matchups.

“I think this is a mustard seed game,” Liberty coach Ritchie McKay said. “ … When we first got here, we just had a belief … that if we committed to the process and tried to honor that, something good was going to happen. This was evidence of that.”

The Flames’ performance Thursday night mirrored the types of victories they have delivered against ASUN Conference foes and fellow mid-major opponents. The pack-line defense methodically wears down those combatants, and players like McGhee hit big shots to help turn the tide completely in Liberty’s favor.

What Liberty did in the opening 20 minutes against the Tigers (4-4) was something it hadn’t been able to do even against foes with comparable rosters.

Missouri shot a miserable 3 of 21 from the field and missed all seven of its 3-point attempts in the first half. The Tigers had more turnovers (15) than points (14) as Liberty raced out to a 35-14 halftime lead.

“I thought our defensive effort was excellent,” McKay said. “That was as well as we’ve played for 40 minutes defensively, including our scrimmages.”

The Tigers didn’t make a field goal until the 12:01 mark of the first half, when Kobe Brown hit a second-chance layup.

Brown was 3 of 6 from the field in the first half, while his teammates were 0 of 15.

By the time Brown made the Tigers’ first shot, Liberty led 16-5.

When his second shot went in with 3:42 remaining in the first half, the Flames’ advantage blossomed to 33-9.

“They put so much pressure on your offense, as well as your defense,” Martin said.

McGhee scored 11 of his 20 points in the first half. He added four assists and five steals.

Shiloh Robinson, who set a career high in scoring with 13 points last Saturday against Maryland-Eastern Shore, topped that with 15 points on 6-of-10 shooting against the Tigers. He added three rebounds.

Brown finished with a team-high 14 points and pulled down a game-high 10 rebounds. Amari Davis added 13 points.

The rest of the team combined to shoot 5 of 27 from the field.

“We were really connected,” Robinson said. “ … We’re just trying to be hard to play against. We were able to do it for the most part.”

Brown and Davis scored on back-to-back possessions late in the second half to trim the deficit to 56-41. Robinson and McGhee combined to hit three 3s in a four-possession stretch to extend the lead back to 20.

Keegan McDowell scored in double figures for the third straight game with 12 points. He added six rebounds for Liberty.

The Flames have won three straight after losing on the road at LSU and in back-to-back games to Iona and Manhattan in the ASUN/MAAC Challenge.

McKay said previously he and associate head coach Brad Soucie thought the defensive performance against Manhattan was similar to the Flames’ last loss at home on Jan. 29, 2019 against Lipscomb.

The triumphs over Bethune-Cookman and Maryland-Eastern Shore featured stretches here and there of the type of defense Liberty has become known for under McKay.

Liberty put it all together Thursday in an outing that could be a defining one in this season.

“It was just a growth period. We got through that, and we really had to unify and really hone on with our system and with our program,” McGhee said. “We’ve just been harping on that and leaning on those things throughout this stretch. When you win games like this, it helps guys and gives them confidence to show this is the right way to do it, it works.”

Dribbles: Blake Preston came off the bench and scored seven points and pulled down five rebounds in 11 minutes. He made all three of his shots. “Blake didn’t get the minutes he’s used to, but boy he was efficient with the minutes he had," McKay said. … Freshman Brody Peebles had six points on 2-of-2 shooting from 3-point range. … Fellow freshman Joseph Venzant pulled down a career-high seven rebounds and only took one shot while serving as the Flames' go-to perimeter defender.

Liberty guard Darius McGhee looks to drive past a Missouri defender during Thursday’s game at Liberty Arena. McGhee scored 20 points in the victory.

Liberty guard Darius McGhee goes up for a shot against Missouri at Liberty Arena on Thursday. McGhee finished with 20 points.

Liberty players high-five as they come off the court during a game against Missouri at Liberty Arena on Thursday, Dec. 2, 2021.