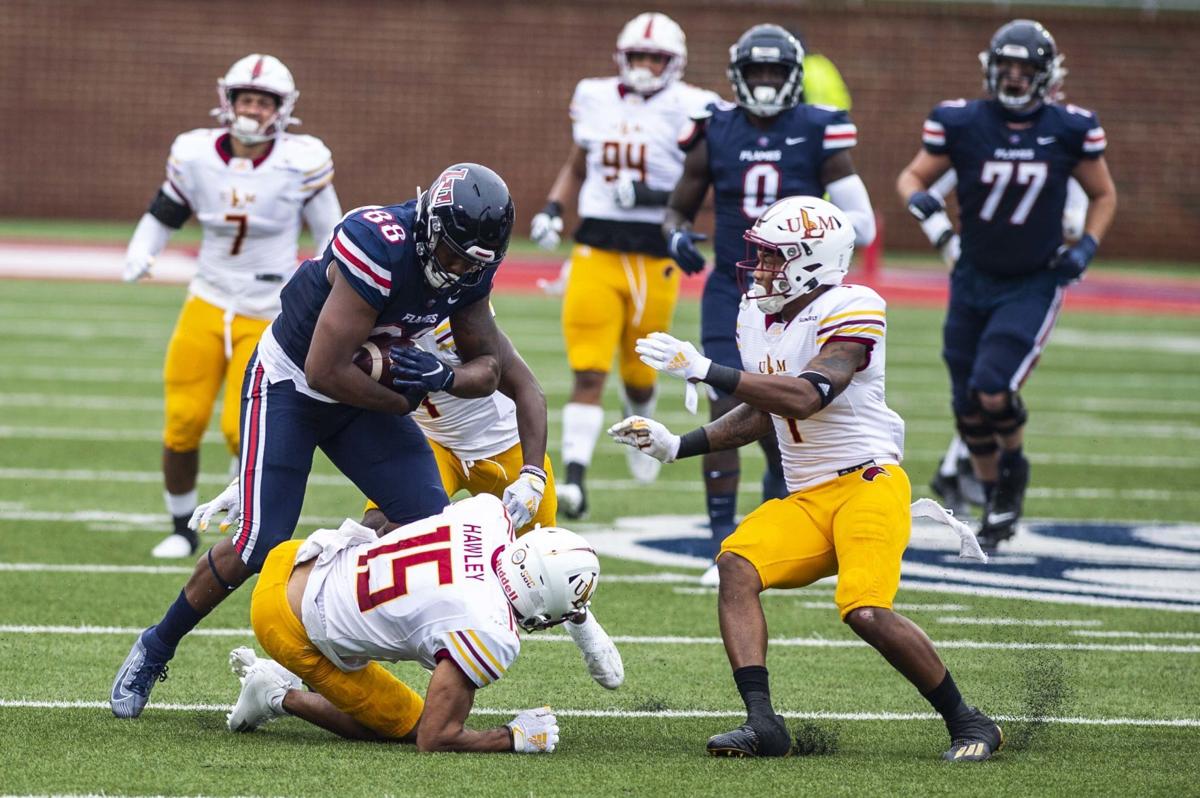 Liberty University tight end Jerome Jackson runs through defenders during a game against Louisiana-Monroe at Williams Stadium in Lynchburg on Saturday, Oct. 10, 2020. 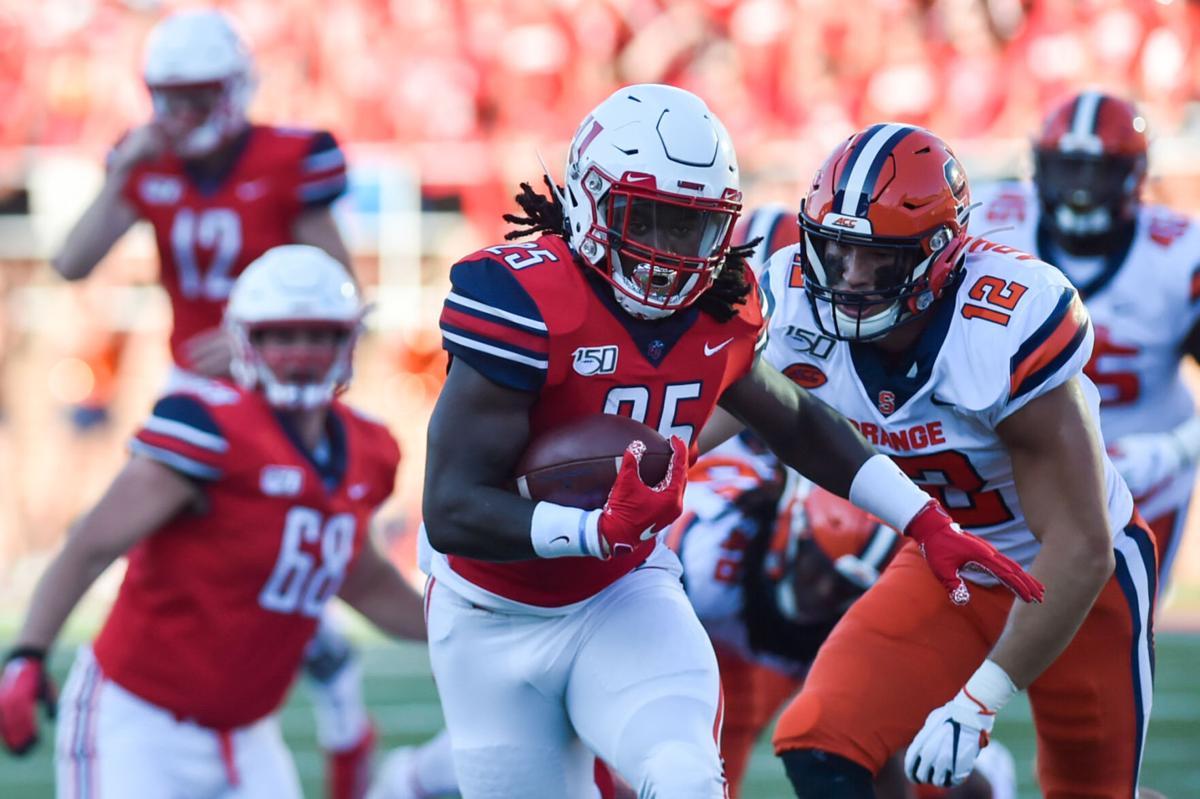 Liberty running back Peytton Pickett runs through the right side for a 12-yard gain during the first quarter Saturday, August 31, 2019 at Williams Stadium.

The Liberty locker room was understandably dejected as the players sat at their respective lockers following a 24-0 loss to Syracuse in last season’s opener. All of the pomp and circumstance surrounding the Flames’ first time hosting a Top 25 team had completely worn off.

Something kept nagging at nose tackle Ralfs Rusins. He and the rest of the defense did their part to keep the Flames in the game. They made plays in the backfield, forced turnovers and, aside from a big run allowed here and there, held their own against a Power Five opponent.

That feeling hasn’t escaped Rusins leading into Saturday’s noon kickoff between Liberty and Syracuse at the Carrier Dome.

“I think this week is personal for a lot of guys,” Rusins said. “It’s especially personal for the D-line because I think we did good last year, and I think we can do even better this year. This year, we want to do even more.

Rusins and the Flames (4-0) enter this matchup against the Orange (1-3, 1-3 Atlantic Coast Conference) with plenty of motivation, momentum and confidence.

It also doesn’t hurt Las Vegas has Liberty pegged as a three-point favorite. The Flames are favored to beat a Power Five team for the second time in program history. (LU was the trendy pick to beat Rutgers last season.)

“Most definitely it’s a special opportunity. You only get so many opportunities like this when you’re playing college football,” Flames running back Peytton Pickett said. “We don’t necessarily look at it like that, but in the back of our minds, we know how important this game is to us. We go into every game the same — we’ve just got to stay focused and play our game and everything will turn out just fine.”

Liberty enters this game as the favorite thanks to its defensive play. The Flames rank fifth in the nation in total defense (260 yards per game), sixth in passing yards allowed (155.3), 11th in scoring defense (18), and 12th in third-down defense (28.8%).

Those gaudy numbers have come at the expense of FCS program North Alabama and hapless Louisiana-Monroe in the past two weeks, and Rusins invoked a Latvian saying that the Flames “can’t have this star-sickness” when playing the Orange.

“Basically the idea is when you reached a point somewhere you think you’re all high and mighty, especially in sports,” he said, “ … then you think you’re the top dog and don’t prepare for the next one as well.

“We’ve had two good weeks and now we’re just not going to prepare for the next game because, like, we’re good,” Rusins added. “We need to prepare like we have been preparing. … This is the game that matters.”

Flames defensive coordinator Scott Symons said Syracuse “will be by far the best team we have played to this point,” and the Orange’s Power Five depth should allow them to overcome the loss of starters Tommy DeVito (quarterback) and Andre Cisco (All-American safety).

Rex Culpepper is expected to get the start at quarterback for an offense that ranks 70th in the nation in scoring (19.3 points per game) and hasn’t found much consistency this season.

The job of replacing Cisco falls to true freshman Rob Hanna, who is tasked with replacing the defense’s best playmaker. The Orange are allowing more than 230 rushing yards per game, and they face the nation’s seventh-best rushing offense.

Liberty is averaging better than 250 yards per game on the ground, and the running backs want to atone for a dismal showing last season.

The Flames were held to minus-4 rushing yards, their worst output since a dreadful showing in the 2016 finale at Coastal Carolina.

“Coming out of a game with negative-4 rushing yards, that’s terrible no matter where you play. You can play Division I, NAIA, that’s terrible,” Pickett said. “It’s definitely a point of emphasis, at least for us in our room, to be able to run the ball. ... Other teams have been having success. We’ve been watching film. If we just come out and do what we’re supposed to do, we’ll be able to run the ball on them.”

Syracuse’s past two opponents, Georgia Tech and Duke, rushed for 275 and 363 yards, respectively, and Liberty has found success running the ball this season behind quarterback Malik Willis, running backs Joshua Mack and Pickett, and an experienced offensive line.

That production has helped the Flames’ defense stay off the field and not get fatigued.

Syracuse ran 79 plays in last season’s game. LU’s four foes this season have run between 51 and 61 plays, and the Flames have won the time of possession battle in three of four games.

“[Today] will tell. We certainly go into every game hoping to run the football just so that we can stay balanced,” Flames coach Hugh Freeze said.

“I think their front is very good. They flash. Can we handle all the stuff they do and allow us to run the football? I sure hope so. I think we can make it a game if we can run the football, for sure.”

Today’s game is the first of three ACC opponents the Flames will play this season. Liberty was the “plus-1” opponent for Syracuse, Virginia Tech and N.C. State in a season altered by the coronavirus pandemic.

'We have to be physical': A look at how a group of undervalued, overlooked offensive linemen became a strength for Liberty

An offensive line filled with seniors recruited to play at the FCS level, coupled with younger linemen who were part of the program’s initial FBS recruiting classes, have developed a rapport for playing more physically than their opponents.

Tate Whatley ran for three of his four touchdowns in the third quarter to help the Golden Eagles cut a 28-point halftime deficit to one touchdown, but the Liberty defense clamped down and held serve the rest of the way in a 56-35 victory.

Malik Willis threw six touchdown passes, added a seventh score on a lengthy rushing touchdown that helped put the game away in the fourth quarter, and Liberty remained undefeated by beating Southern Miss.

Emanuel Dabney carried an awfully big chip on his shoulder when he arrived at Liberty prior to the 2019 season. The cornerback spent the previ…

Raise your hand if you thought Liberty was going to make it to the end of October and play all of the games on the schedule up to this point.

Liberty returns home for one game against Southern Miss before its first open week of the altered 2020 season. That means a familiar staple re…

The two programs nailed down the date Wednesday. Liberty will play UMass at noon on Black Friday at Williams Stadium. It is the third in a 10-game series between the teams slated to be played through the 2027 season.

Liberty University tight end Jerome Jackson runs through defenders during a game against Louisiana-Monroe at Williams Stadium in Lynchburg on Saturday, Oct. 10, 2020.

Liberty running back Peytton Pickett runs through the right side for a 12-yard gain during the first quarter Saturday, August 31, 2019 at Williams Stadium.