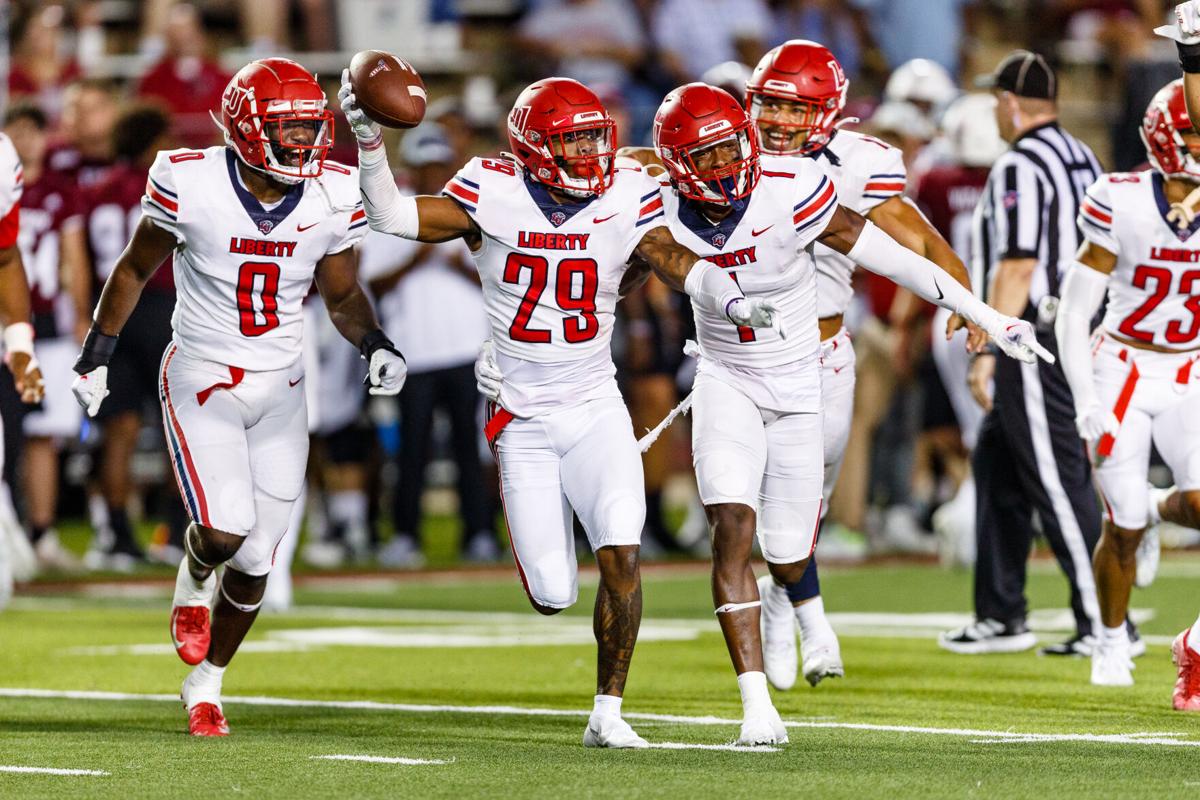 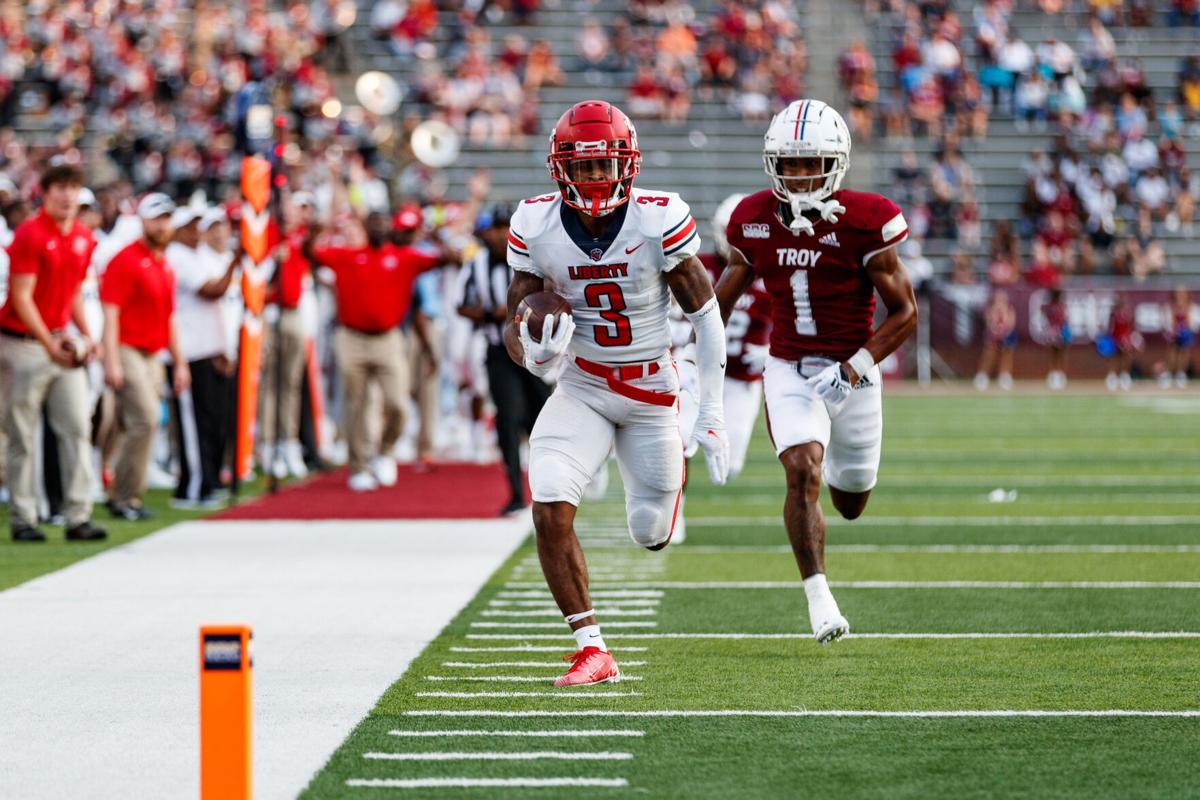 Liberty wide receiver DeMario Douglas runs into the end zone to complete a 32-yard touchdown reception in the first quarter Saturday against Troy at Veterans Memorial Stadium in Troy, Alabama. 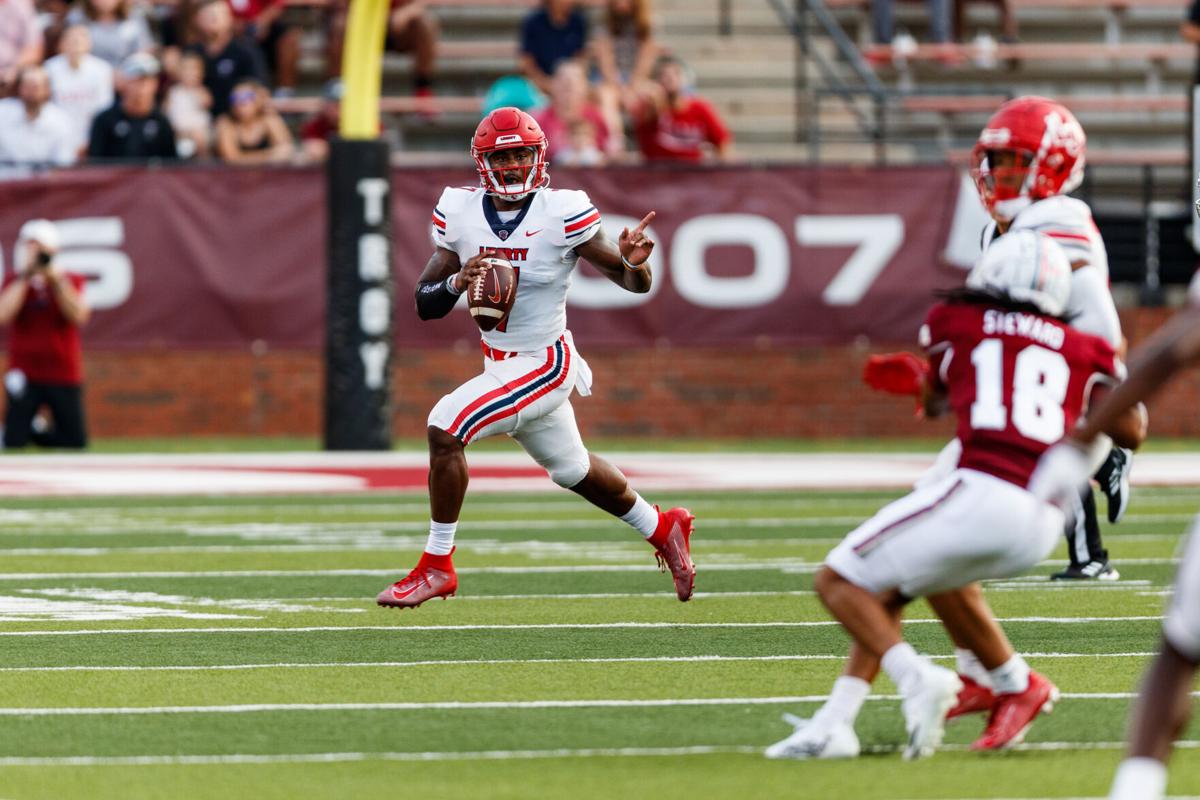 Liberty quarterback Malik Willis looks for an open receiver during the first quarter Saturday against Troy. Willis passed for 154 yards, rushed for 93 and accounted for three touchdowns at Veterans Memorial Stadium in Troy, Alabama.

TROY, Ala. — The first words out of Hugh Freeze’s mouth to his defensive coaches as soon as Troy’s fourth-down play got it to the 1-yard line were simple: Get a stop and force the Trojans to burn their final timeout.

Liberty’s defense responded with a stop to force second down. Then another stop forced Troy to use its final timeout. And Storey Jackson came up with a sack to back up the Trojans even more.

It was everything Freeze wanted and then some.

Liberty held Troy to 131 yards of offense over the final three quarters, Malik Willis accounted for three touchdowns, and the Flames claimed a 21-13 victory over the Trojans before an announced crowd of 24,714 at Veterans Memorial Stadium.

“They got three stops. That was beautiful,” Freeze said.

The Flames (2-0) limited Troy (1-1) to 232 yards of offense, recorded five sacks and posted their first takeaway (Duron Lowe interception) of the young season.

The stingy performance did feature a pair of fourth-down plays on the Trojans’ final drive that gave some life to the home sideline.

Luke Whittemore got behind Chris Megginson on a fourth-and-3 play and picked up 35 yards to the Liberty 1-yard line.

That is when the defense responded to Freeze’s challenge.

Taylor Powell was forced out of bounds at the 1 by Ahmad Walker on a bootleg, and Kimani Vidal was stuffed at the line of scrimmage on the second-down play.

Powell, on the third-down play after the timeout, was sacked by Storey Jackson to force fourth down from the 11.

A busted coverage in the middle of the field allowed Powell to find Deyunkrea Lewis wide open for a touchdown that cut the Trojans’ deficit to eight points.

“We really just tried to match their energy and their tempo,” Jackson said of Liberty’s defense, “and with that we just started bringing a lot more people at the quarterback, getting him off the spot and making him make quick decisions and bringing that pressure.”

Willis accounted for two touchdowns in the season-opening victory over Campbell and delivered again against Troy.

The star quarterback completed 13 of 18 passes for 154 yards and two first-half touchdowns, and he rushed for a game-high 93 yards on 20 attempts.

His 4-yard rushing touchdown early in the fourth quarter gave the Flames a 21-7 lead.

“I thought he willed us to win,” Freeze said of Willis.

Willis and the Liberty offense got off to a hot start by scoring on their first two drives.

He connected with DeMario Douglas on a wheel route for a 32-yard score to tie the game at 7, and then the Flames took the lead for good when Willis found Jerome Jackson over the middle on a fourth-down call from the 2-yard line midway through the second quarter.

“Everybody was hitting on all cylinders,” Willis said of the early offensive execution.

The Liberty running attack allowed the Flames to maintain possession for 39 minutes.

Green and Shedro Louis were lined up frequently alongside Willis in the backfield, and both Green and Louis (19 yards on seven carries) were able to find running room around the edge.

“From film we noticed they didn’t take the backs out of the backfield well, like they didn’t go with them well,” Green said. “We thought that if we had two backs in the backfield, it would throw their whole mindset off. They weren’t prepared for it. We just put it in this week. It was a shock for them. … It was successful.”

Troy had 101 yards of offense on its two first-half drives. The opening sequence — a 13-play, 75-yard march that took more than five minutes off the clock — culminated in B.J. Smith’s 5-yard touchdown run around the left side to give the Trojans a 7-0 lead.

“The first drive, they had a good drive running the ball, but after that we just had to shut down the run and make them a one-dimensional team, which I think we did,” Jackson said. “There’s things that we need to work on, but I think we did a good job with that.”

Troy’s offense didn’t muster much in the second half until its final drive down two scores.

The Trojans had life after Alex Barbir’s 33-yard field goal attempt was blocked (Freeze felt Troy lined up illegally over the center), and were able to pick up 64 yards to cut the deficit to eight points.

Powell completed 18 of 25 passes for 211 yards as the rushing attack finished with a meager 21 yards on 24 attempts.

“I thought our defensive staff and kids played a solid, solid football game,” Freeze said. “Anytime you hold somebody to 21 rushing yards, that’s pretty good. We’ll take that any time.”

Liberty's defense suffocates Old Dominion in the second half

Hugh Freeze could sense it. His defense, which surrendered touchdowns on back-to-back drives to close the first half, was frustrated. An other…

The spread dropped to 6 1/2 points in favor of the Flames (3-0) after Monday’s movement, and if they remain favored, it will mark the third time in as many seasons they will be favored against a Power Five opponent.

There are 25 players from Liberty and Old Dominion that took the field Sept. 1, 2018, when the Flames made their FBS debut. Nineteen of them w…

Sargeant, a former walk-on, reflects on 50 consecutive starts at center for Liberty

Liberty football notebook: Salter not ready 'to take significant snaps' despite being ruled eligible, and more

Stubbs and Douglas have been the most consistent weapons in Liberty’s passing attack.

Liberty wide receiver DeMario Douglas runs into the end zone to complete a 32-yard touchdown reception in the first quarter Saturday against Troy at Veterans Memorial Stadium in Troy, Alabama.

Liberty quarterback Malik Willis looks for an open receiver during the first quarter Saturday against Troy. Willis passed for 154 yards, rushed for 93 and accounted for three touchdowns at Veterans Memorial Stadium in Troy, Alabama.