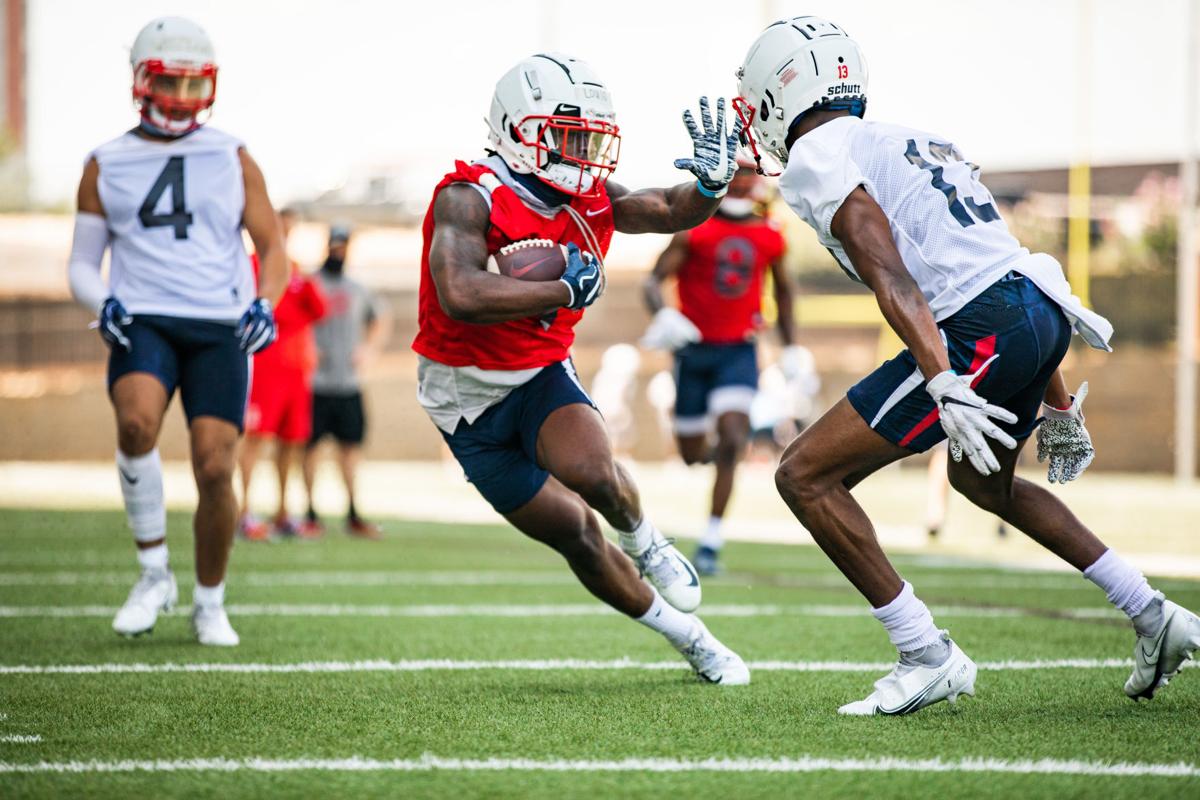 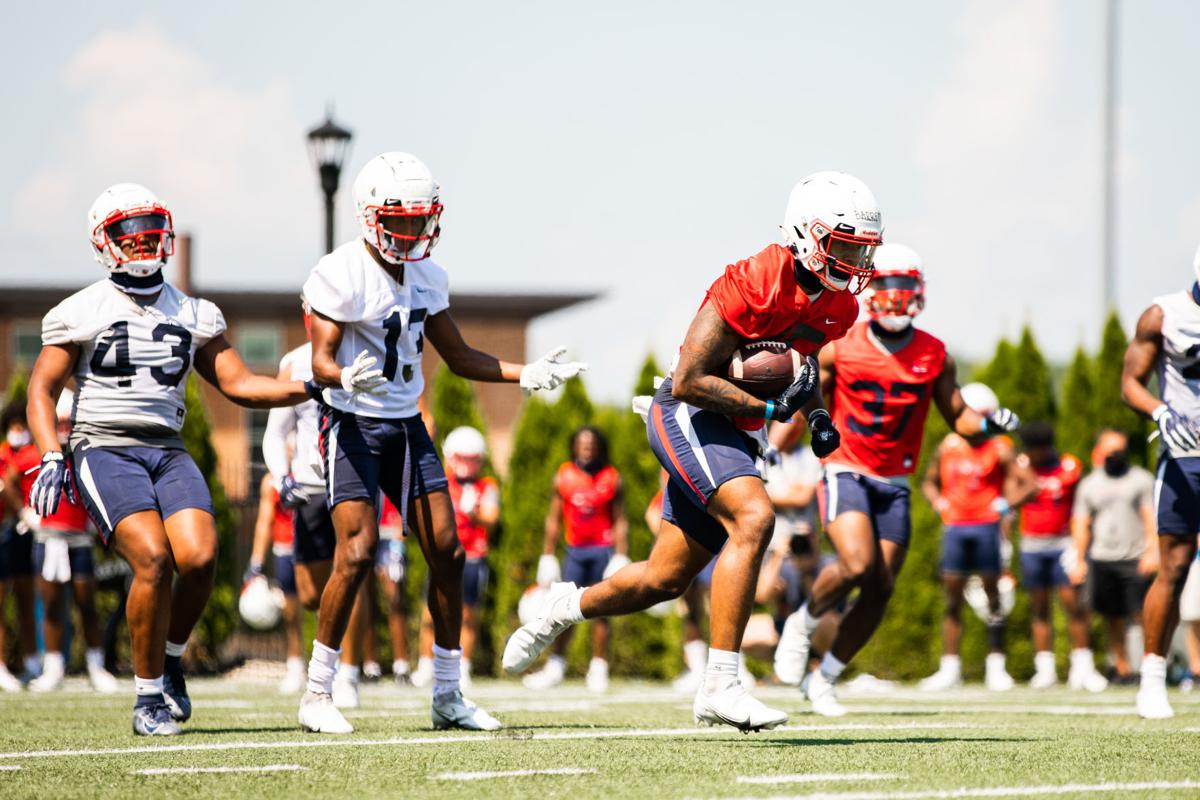 Liberty tight end Chris Barrett runs up the field after making a reception during the Flames' second practice of training camp Monday, August 10, 2020. 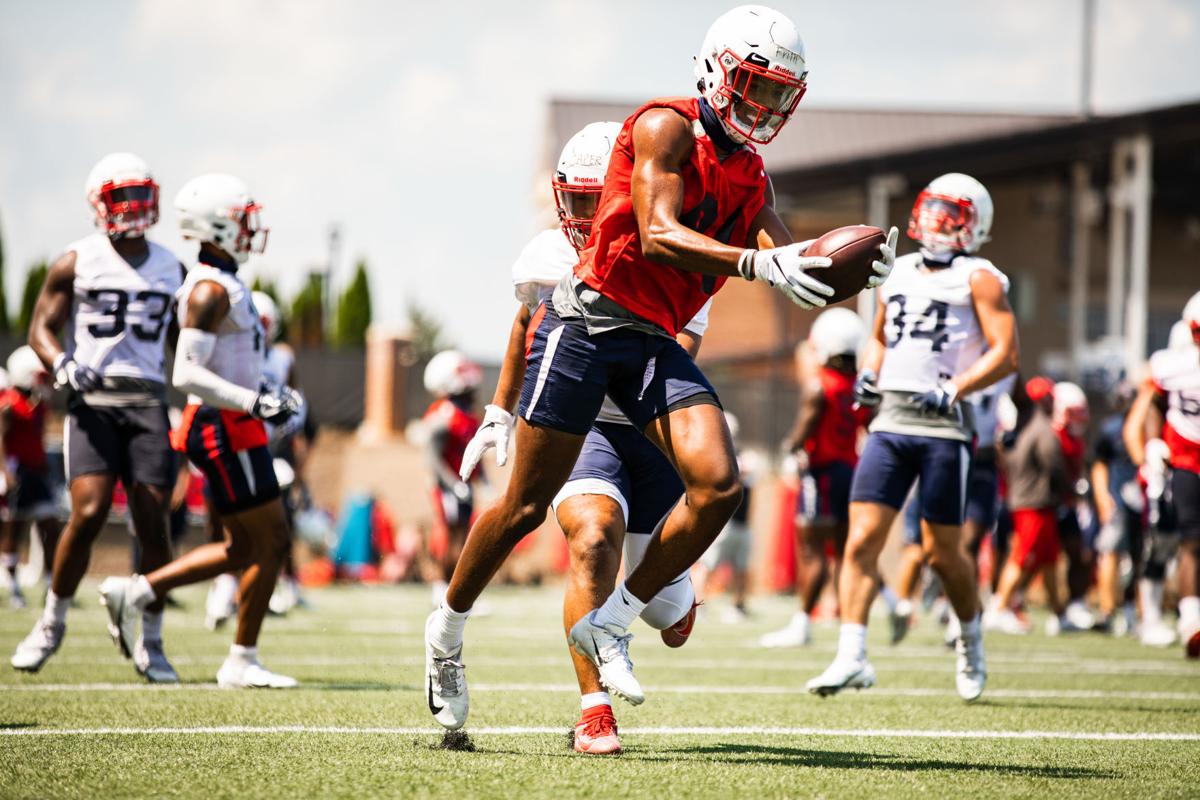 Liberty’s Hugh Freeze was one of several prominent college football coaches who voiced approval Monday of a movement to save the 2020 season.

Freeze, in a virtual press conference with local media, said he and the Flames are “absolutely 100%” in favor of playing a college football season this fall, even with Power Five conferences debating whether to postpone or cancel games amid the coronavirus pandemic.

Old Dominion announced Monday it was not playing football or other sports this fall, and the Big Ten Conference is reportedly considering either canceling or postponing the season with other conferences potentially ready to follow suit.

“I think everybody just really wants to know what’s going to happen. I’m sure our kids are no different. They read social media,” Freeze said. “They’re all in. If you’re asking me if our kids want to play, you bet your bottom dollar. We want to play; we want to coach.”

Freeze, who previously coached at the University of Mississippi, joined a group of coaches that includes Alabama’s Nick Saban, Ohio State’s Ryan Day and Michigan’s Jim Harbaugh in publicly supporting a players’ movement to play football this fall.

Quarterbacks Chris Ferguson and Johnathan Bennett both tweeted their support of playing this season, and defensive end Austin Lewis tweeted a football season “is needed.”

“I think our players, we’re living in a day and time where they have and deserve a voice in what goes on. I love to see them banding together with the desire to play,” Freeze said. “I think that’s the type of kids we enjoy coaching. Again, the young men don’t know everything that goes into those discussions that the college presidents have to have and the responsibilities that they have in making those decisions, and those are the ones that are very difficult. I’m totally supportive of the fact that our players want to play.”

Freeze announced Monday several players had previously tested positive for COVID-19, and added those players “were not extremely sick in any manner.” He did not specify how many players tested positive.

“We’re not even having anyone that needs to get tested for symptoms in the last week or so,” the coach said.

Liberty had not previously announced coronavirus testing results for student-athletes, and Freeze on Friday said he, his staff and the players were tested two weeks ago.

Athletic director Ian McCaw late last week said the program is following the testing and safety protocol guidelines mandated by other conferences, like the ACC, in order to play those opponents this season.

“We’ve been very, very blessed,” Freeze added. “I think our medical team that we lean on for advice and for protocols, we’ve been very, very conservative and tried to if there was any chance someone was in the contact tracing, we certainly put them in quarantine pretty quickly to try to protect them.”

Freeze said he loved the energy his players brought to Monday’s second practice of training camp and how hard they pushed each other during the 90-minute session, a sign of his team’s want to play football this fall.

“Moving forward, now that we’re here and there’s uncertainty and this, that and the other, in my mind we’re practicing whether we have a game or not,” defensive line coach Josh Aldridge said. “It’s like Coach said, we have to take it a day at a time and win this moment. We’re not getting ready for an opponent right now anyway, so we’re just focusing on getting better at our fundamentals and doing our job and keeping our head down, if you will.

“Not that we’re not acknowledging it, but to be honest, it wouldn’t change how hard we’ve got to go at practice whether we’re playing a game in a month or not. We’re out there and we’re going to give the effort that’s our standard and the standard won’t change.”

Freeze opened Monday’s practice with a team meeting addressing the uncertainty of football being played in 2020. He reiterated that none of the members of the football team gathered in the indoor practice facility has control on what the final outcome will be for the season, as university presidents and athletic directors plot the course for what will be decided in the coming days and weeks.

“This virus, you can catch it a lot of different ways obviously, and I’m not convinced that our kids are at any more risk from playing football,” Freeze said, “but there’s part of me also that understands that’s just a small piece of this pie that administrators have to think about. There’s a lot of dynamics that go into pulling off a college football game.”

Liberty recorded three consecutive stops on defense after WKU rallied to tie the game, and those defensive stands were vital for the Flames securing a 30-24 victory Saturday.

Freeze and Liberty play their first home game of the pandemic-altered 2020 season at 1 p.m. Saturday when Davis and FIU visit Williams Stadium.

'The alpha wolf': JaVon Scruggs has transformed into Liberty's leader in the secondary

Appomattox native JaVon Scruggs enters his junior season as an unquestioned leader in the secondary. Flames coach Hugh Freeze and defensive coordinator Scott Symons rely on the 5-foot-11, 180-pound Scruggs to be their eyes and ears on defense.

The Flames certainly had a spectacular debut last weekend at Western Kentucky. Liberty became the fourth team this season to eclipse 350 rushing yards in a single game.

Gone are record-setting seniors instrumental in the program’s transition to the Football Bowl Subdivision, and there are still question marks as to who will fill the voids at key positions. Those types of transitions are nothing new for Hugh Freeze.

Malik Willis’ phone rang Monday morning and on the other line was Liberty quarterbacks coach and co-offensive coordinator Kent Austin.

Liberty tight end Chris Barrett runs up the field after making a reception during the Flames' second practice of training camp Monday, August 10, 2020.