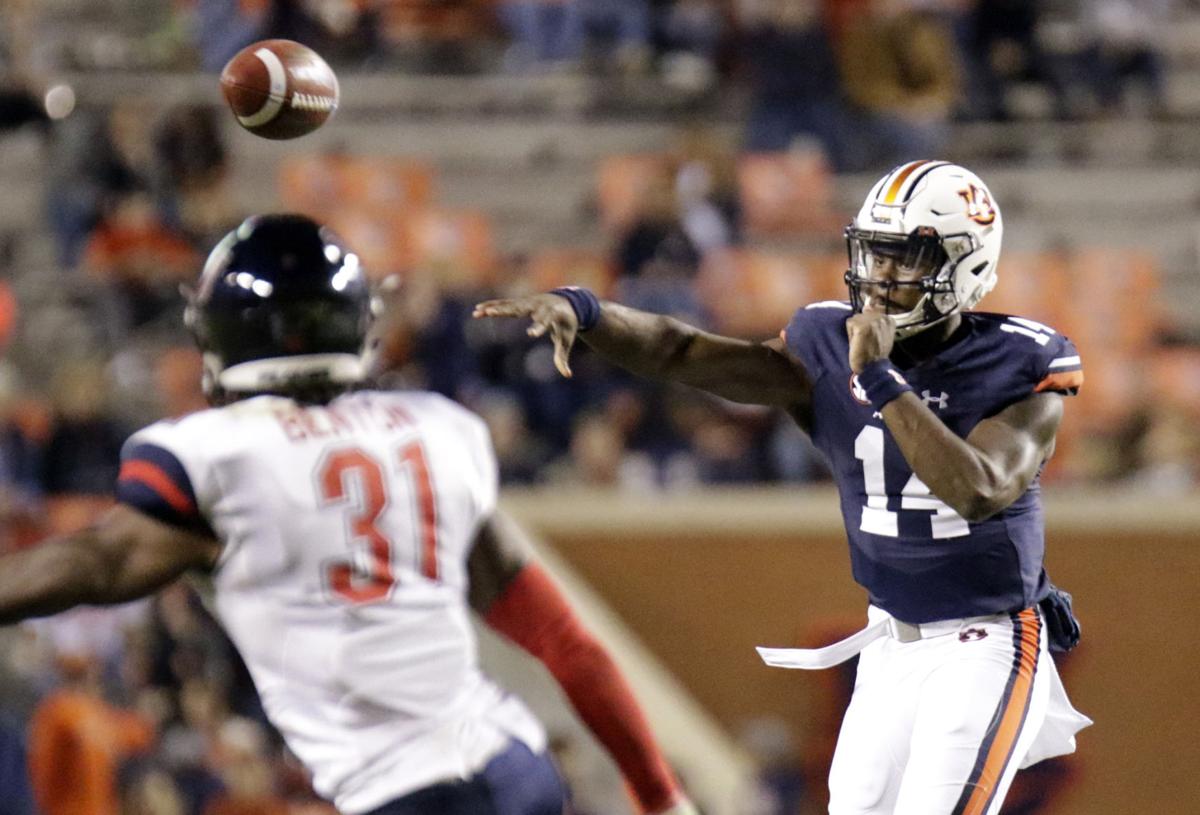 Auburn's Malik Willis (14) throws the ball in the second half. Auburn vs. Liberty football on Saturday, Nov. 17, 2018, at Jordan-Hare Stadium in Auburn, Ala. 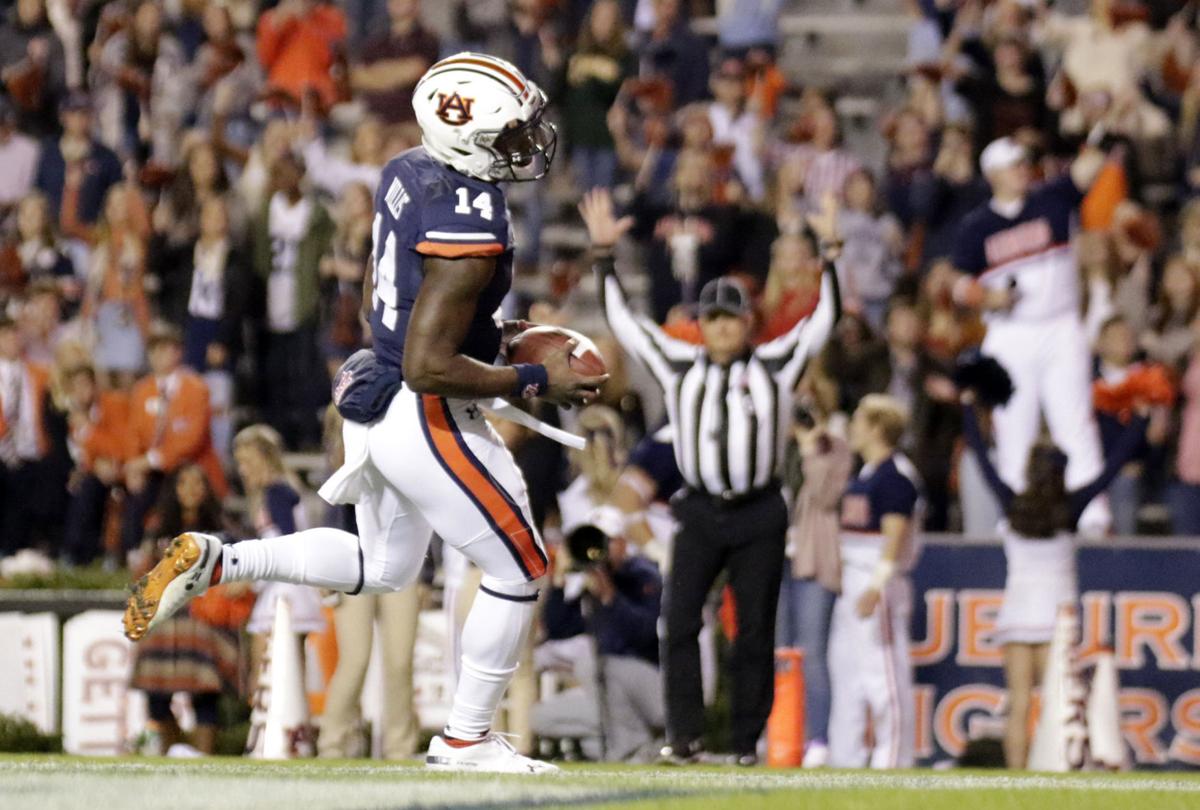 Auburn's Malik Willis (14) carries the ball toward the goal line for a touchdown in the second half. Auburn vs. Liberty football on Saturday, Nov. 17, 2018, at Jordan-Hare Stadium in Auburn, Ala. 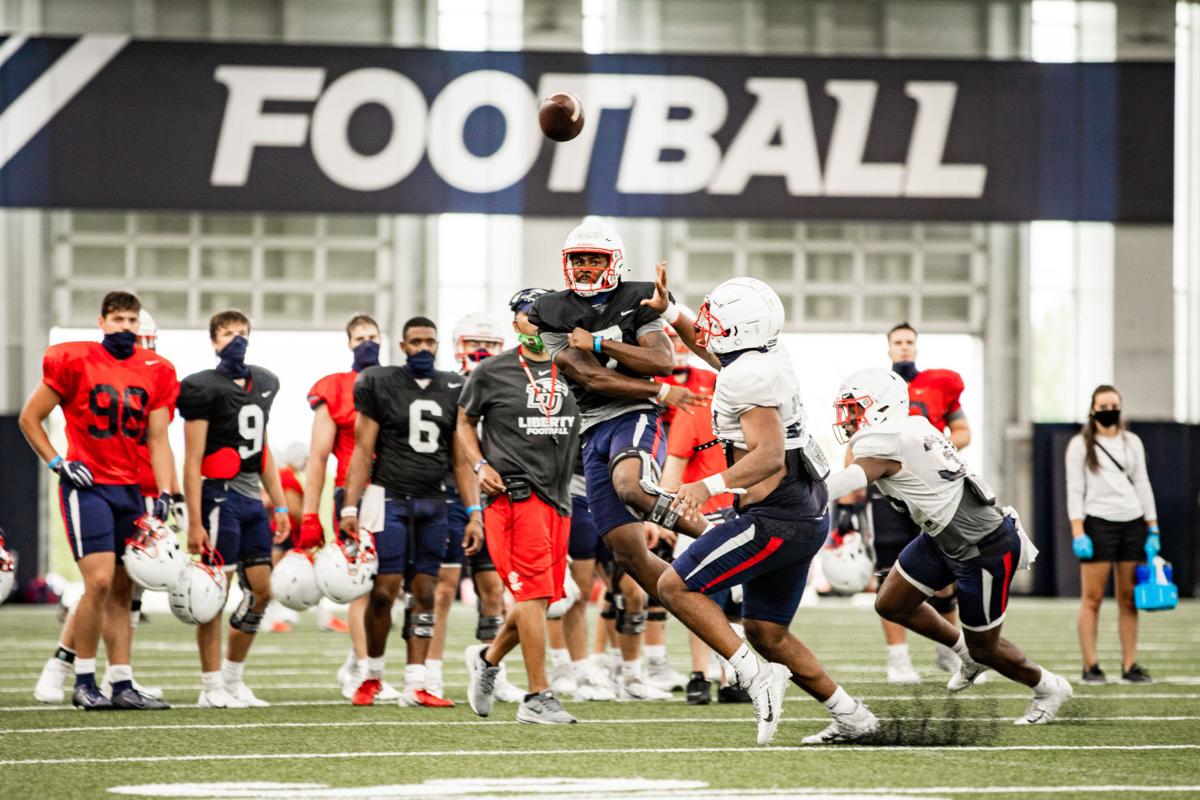 Quarterback Malik Willis releases a pass while under pressure during a Liberty football practice Aug. 12 in the indoor practice facility.

Malik Willis’ phone rang Monday morning and on the other line was Liberty quarterbacks coach and co-offensive coordinator Kent Austin. The Auburn transfer was expecting to find out if he or another signal caller was going to be the Flames’ starting quarterback in Saturday’s season opener at Western Kentucky.

Austin delivered the news Willis had been waiting to receive for nearly four years: The dual-threat quarterback won the job and will guide the offense when the Flames meet the Hilltoppers at Houchens-Smith Stadium.

“I’m really excited. This is an opportunity of a lifetime,” Willis, a redshirt junior, said Tuesday. “I plan on going out there and taking advantage of it.”

Saturday’s start will be Willis’ first at the collegiate level and will come 1,379 days after he started in the 2016 Georgia High School Association Class 7A state title game as a senior at Roswell High School.

He spent the 2017 and 2018 seasons as Jarrett Stidham’s backup at Auburn, and then transferred following the 2019 spring practice session when he was not in the running for the Tigers’ starting quarterback position.

The NCAA denied Willis’ waiver for immediate eligibility after he arrived at Liberty, and he worked on the scout team last season as Buckshot Calvert led the Flames to a victory in the Cure Bowl.

“Everything happened for a reason,” Willis said. “I’m just glad God had something for me. I take it as a gift.”

Willis’ dual-threat ability allows Flames coach Hugh Freeze to open up his RPO offense and utilize the quarterback in a multitude of schemes, similar to how Freeze utilized Chad Kelly at Ole Miss.

“Good player, good athlete, can run and throw, and he fits Coach Freeze’s system with the RPO game and all that,” Western Kentucky coach Tyson Helton said of Willis. “It’s going to be a great challenge for our defense. We’re going to have to cover the whole field.”

What Freeze and Austin had to do during the extended training camp was develop Willis’ potential as a thrower, particularly when he has to elude defenders in the pocket. Austin noted Willis initially had trouble re-establishing his hips when he was on the run and often threw from a three-quarter angle that resulted in passes sailing above the targeted wide receiver.

Austin set up drills for Willis to repeat his delivery so it became as consistent as possible and the release would not be affected if he is throwing from the pocket or scrambling to the edge.

“He’s never been taught how to move and to re-establish a quick base and distribute his weight on the throw,” Austin explained. “What we tried to do is mimic where the last part of the throw is as consistent as possible so the release doesn’t get affected.

“Malik has a tendency, because he’s so athletic, to get his hips out of alignment with his shoulders and his arm. He’ll try to find a receiver with his arm and many times that ball will come out three-quarter, and in camp, when he misses, he misses high because of that. We’ve worked really hard at correcting that.

“He’s gotten a lot, lot better at that so that doesn’t hinder his play-making ability, but when he tries to buy time and find a receiver, he still needs to fundamentally make sure that he’s in position to make that throw more times than not.”

Willis, because of his lack of playing time in two seasons at Auburn, never got the opportunity to throw much during his 12 appearances. He attempted a meager 14 passes and completed 11 for 69 yards and one touchdown.

He showcased his electric running ability when he had the chance, with 309 rushing yards and two scores on 28 carries.

“I’ve been in games, I’ve played in games. It’s just this time, I get to start from the beginning, that’s all,” Willis said. “I just have to go out there and execute and just do what the coaches’ game plan has for us.”

Austin’s plan of attack in training camp focused on harnessing Willis’ natural talents and allowing the Atlanta native to grow mentally in the offense. Austin had Willis and the other quarterbacks, including the others who battled for the starting job in Chris Ferguson and Johnathan Bennett, go over plays in their minds and how they would attack any type of coverage they could potentially face.

The many mental reps served Willis well on the field; he separated himself from the others in the final week of training camp as things began to click within the offense.

“He’s been in the 90 percentile in both categories [mental and physical execution] really for the last week,” Austin said. “He also brings the ability to make big plays with his feet, his athleticism. He’s a dangerous player.

“That being said, I think the other two are well-prepared as well and can go in the game and run our offense effectively and move the ball and put the ball in the end zone. But I think Malik’s understanding of the offense, which he demonstrated here recently, combined with his big-play ability, probably separated the decision for [Coach Freeze].”

Willis’ running ability opens up possibilities for the Liberty offense that wasn’t showcased last season with Calvert at the helm. Calvert, who rewrote a good portion of the program’s record book, was a pure pocket passer who seldom scampered out of the pocket.

Austin said Monday the entire repertoire of quarterback runs in the playbook will be available when Willis steps on the field.

“I definitely think it opens it up,” running back Joshua Mack said. “The D-ends, they can’t rush up field; they’ve got to actually stay home because we have a quarterback that can get out of the pocket, use his legs and extend drives.”

Willis waited nearly four years to be named the starting quarterback and be given the keys to a college football offense. That journey is one he is not taking lightly heading into a 2020 campaign that is anything but normal with the coronavirus pandemic threatening every week.

Auburn's Malik Willis (14) throws the ball in the second half. Auburn vs. Liberty football on Saturday, Nov. 17, 2018, at Jordan-Hare Stadium in Auburn, Ala.

Auburn's Malik Willis (14) carries the ball toward the goal line for a touchdown in the second half. Auburn vs. Liberty football on Saturday, Nov. 17, 2018, at Jordan-Hare Stadium in Auburn, Ala.

Quarterback Malik Willis releases a pass while under pressure during a Liberty football practice Aug. 12 in the indoor practice facility.