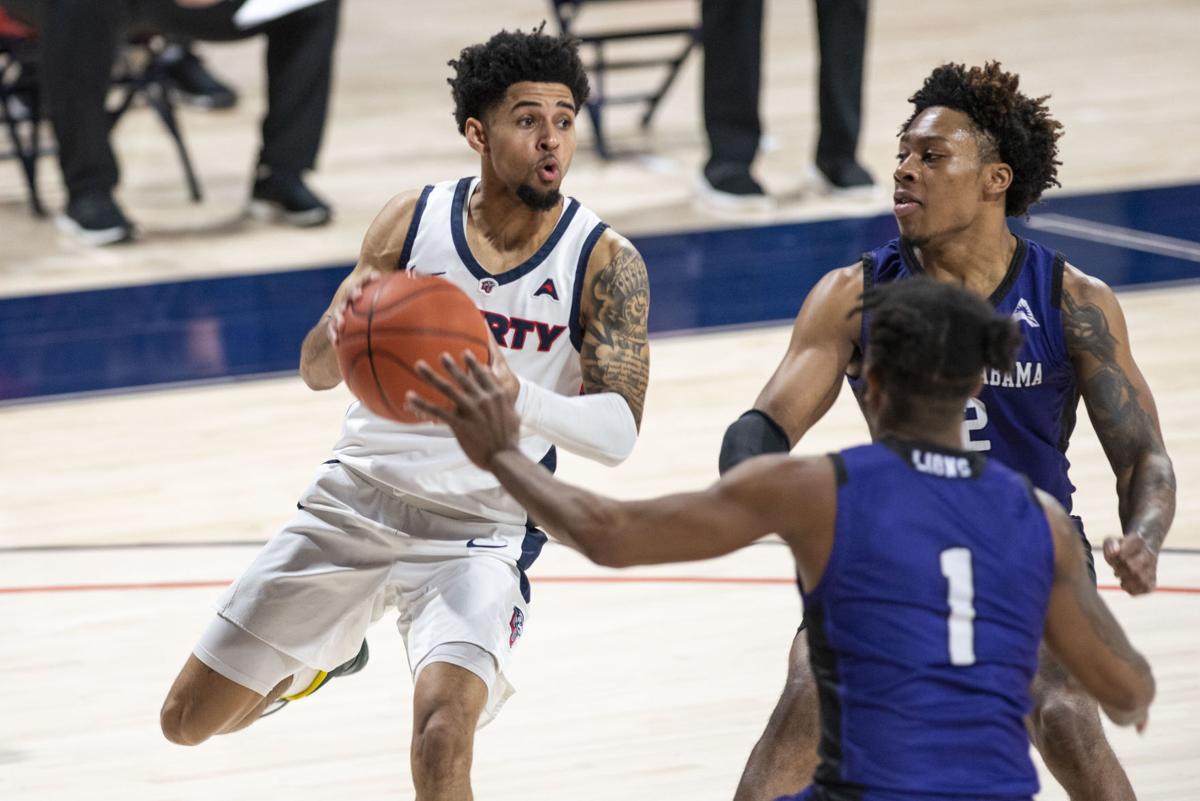 Liberty guard Chris Parker looks to pass during a game against North Alabama earlier this season. Parker leads the Flames with 97 assists and is second in scoring at 10.3 points per game. 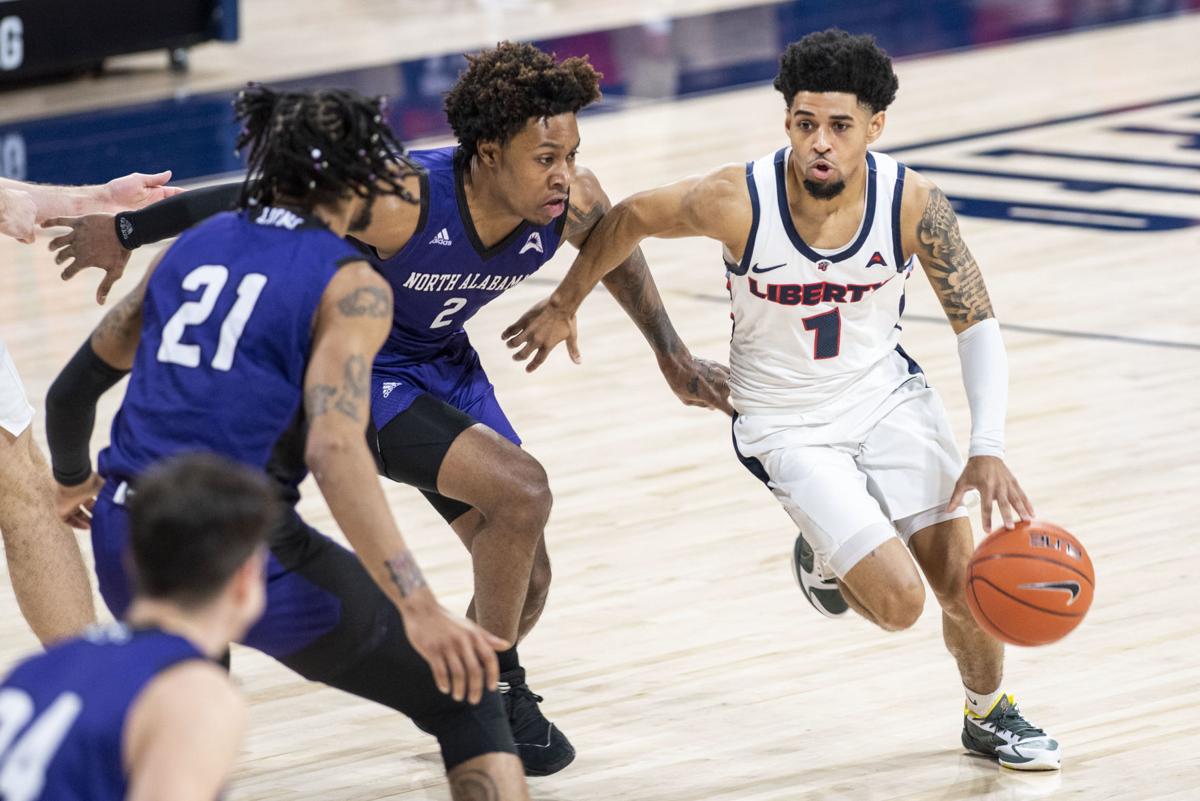 Chris Parker was still processing the loss of not playing for Henderson State in the 2020 NCAA Division II Tournament when he began shifting his focus to finding a new program to play for as a graduate transfer. The point guard, a star for the Reddies, had to navigate the unchartered waters of being recruited during the early stages of a global pandemic and eventually weigh his options.

Parker determined his next stop with one goal in mind: Get a chance to participate in an NCAA Tournament before venturing into a professional career. He wanted the opportunity to play in March Madness and experience the exhilaration of competing against the nation’s best.

It became clearer and clearer by the day where he was going to transfer — Liberty.

“It’s simple: I came here for one reason and that was to win a championship and go to the tournament,” Parker said a little more than a week ago after the Flames won the ASUN Conference tournament title and locked up the automatic bid to the NCAA Tournament. “I didn’t have any other intentions coming here. Basically, I accomplished what I wanted to accomplish with this team.”

Along the way to helping Liberty secure its third consecutive ASUN tournament title, Parker embraced his role on this season’s team and helped the offense become more efficient and effective. Flames coach Ritchie McKay and Parker’s teammates have lauded his play in helping Liberty (23-5) earn a No. 13 seed in the NCAA Tournament’s Midwest Region. The Flames play No. 4 seed Oklahoma State (20-8) at 6:25 p.m. Friday inside Indiana Farmers Coliseum in Indianapolis. The game will be broadcast on TBS.

“For him to embrace a role that he came from at Henderson State, where he was the man, he took all the shots, but to embrace the role of, hey, I’ve got to be just as much of a distributor as I am a scorer, if not more, and I’ve got to play defense … in this system. That’s hard,” McKay said. McKay was named the District Three coach of the year Tuesday by the National Association of Basketball Coaches (NABC).

“He’s taken on that challenge and continued to improve, and we wouldn’t be where we are without him.”

Parker began the season in the Flames’ starting lineup and came off the bench only once during the 28-game campaign. The 6-foot-1 guard leads the team in assists with 97, is second in scoring at 10.3 points per game, and he’s shooting 46.2% from the field.

His contributions, though, go beyond the box score. His ability to dribble-penetrate and beat defenders has created not only easy scoring opportunities at the rim for him, but allowed Parker to find open teammates beyond the arc.

McKay and assistant coach Derek Johnston retooled the offense before the season to suit Parker’s strengths. The off-ball screeners and movement have allowed the Flames, who play at a more methodical pace, to be one of the nation’s most efficient teams.

“I think he’s been critical. I love playing with Chris,” junior guard and ASUN player of the year Darius McGhee said. McGhee was named to the NABC District Three first team Tuesday.

“Chris makes everything easier for everyone because of his ability to make plays with the ball in his hands. He’s a super-high threat to opposing teams in a lot of different actions for us. I love playing with Chris. It makes it easier when you’re someone playing off the ball [with] somebody who draws that much attention with the ball in their hands.”

Parker averaged nearly 14 points per game and owned an assist-to-turnover ratio of 1.57 in his three seasons at Henderson State.

That type of production and leadership were the type of qualities McKay has recruited in graduate transfers since he returned to guide the Flames prior to the 2015-16 season.

The first two graduate transfers, Anthony Fields in 2015-16 and Ray Chen in 2016-17, helped in laying the foundation for the program and identifying the type of player McKay has sought to recruit. Field’s integrity and maturity “glued us together,” according to McKay, and the coach added Chen’s selflessness and sacrifice was part of “being a part of something bigger than himself.”

While neither of them tasted an NCAA Tournament berth, the Flames’ success soon after helped McKay to begin landing graduate transfers who could produce in a bigger way on the court.

Keenan Gumbs, a Division III transfer from Schreiner, spent the 2018-19 season as the Flames’ most important bench player with his versatility allowing him to play multiple positions as Liberty made the NCAA Tournament.

Parker’s on-court production has been his biggest contribution during a season dominated by the pandemic.

“Chris, he’s definitely had the greatest impact from a numbers standpoint,” McKay said. “We were able to shift our offense a bit because of how talented Chris Parker is.”

The offense has thrived under Parker, but he said his biggest growth has come on the defensive end. It was a challenge at first learning the intricacies of the pack-line defense from McKay and associate head coach Brad Soucie, but Parker has learned to embrace it and allow it to become a strength.

“I think that’s probably the most rewarding. Basically I can put that on my resume — I graduated with the pack-line defense,” Parker said. “I think I can carry that going into my pro career and I know I was a part of a really good defensive team. I think that’s where I grew the most and was the most rewarding. … I know a couple of years from now I’ll appreciate all the defensive stuff they taught me.”

“It’s simple: I came here for one reason and that was to win a championship and go to the tournament. I didn’t have any other intentions coming here. Basically, I accomplished what I wanted to accomplish with this team.” -- Chris Parker, Liberty guard

Stenhouse turned to a source outside of auto racing to help with the mental side of making sure those bogey finishes don’t turn into double or triple bogeys: Liberty football coach Hugh Freeze.

Liberty head coach Hugh Freeze on Wednesday called Walker “one heck of a football player,” and said Seegars’ future will likely be as a Jessie Lemonier-type defensive end playing the Bandit position.

The butterflies were swirling in Anthony Butler’s gut Thursday afternoon. The former Liberty linebacker, who spent one season in the program a…

Jodie Conolly scored two goals, Azul Iritxity Irigoyen recorded her second shutout of the season against Temple, and No. 6 Liberty claimed a 2…

Malik Willis, in his first season as a starter in 2020, made the right decisions on a consistent basis.

Liberty guard Chris Parker looks to pass during a game against North Alabama earlier this season. Parker leads the Flames with 97 assists and is second in scoring at 10.3 points per game.