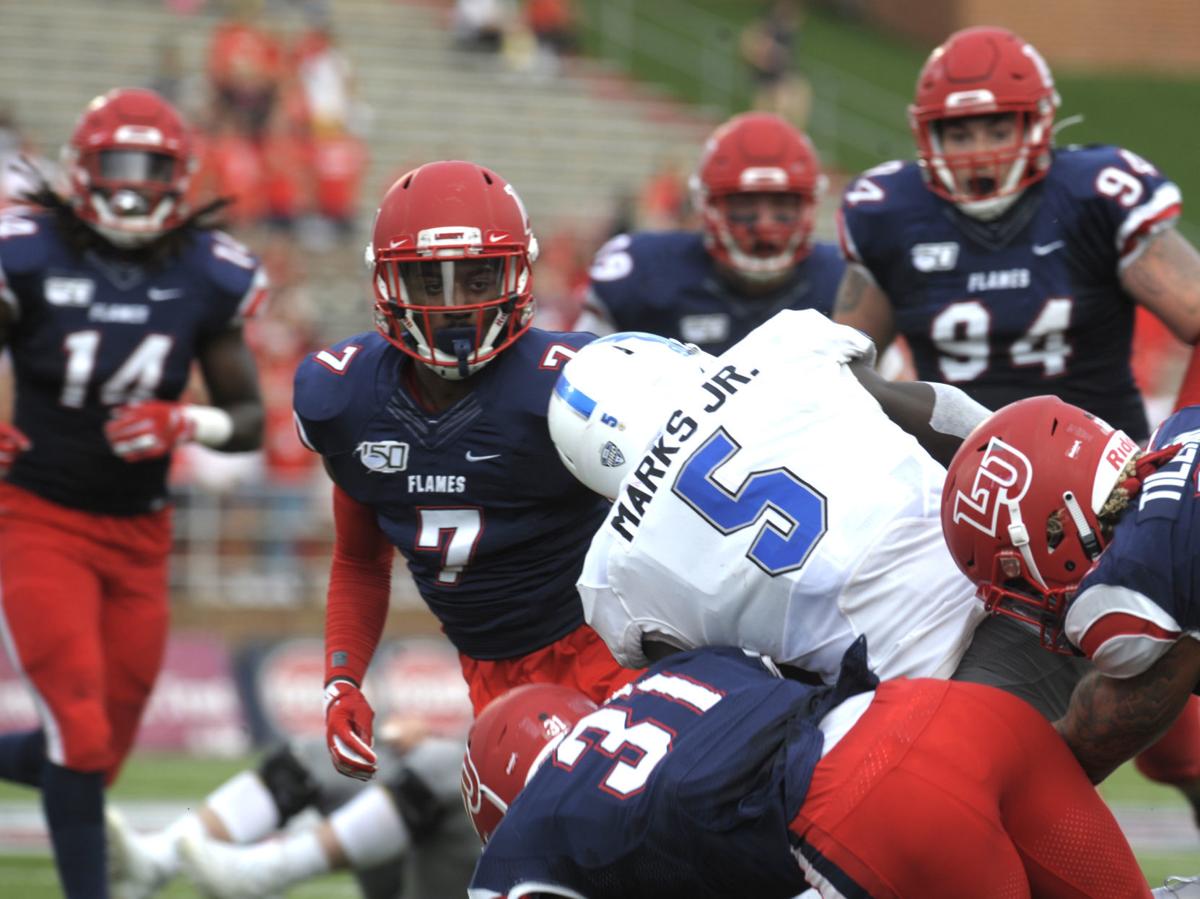 Liberty freshman nickelback Tayvion Land (7) closes in on a play as teammates corral Buffalo running back Kevin Marks during the Flames' victory over the Bulls Sept. 14, 2019 at Williams Stadium. 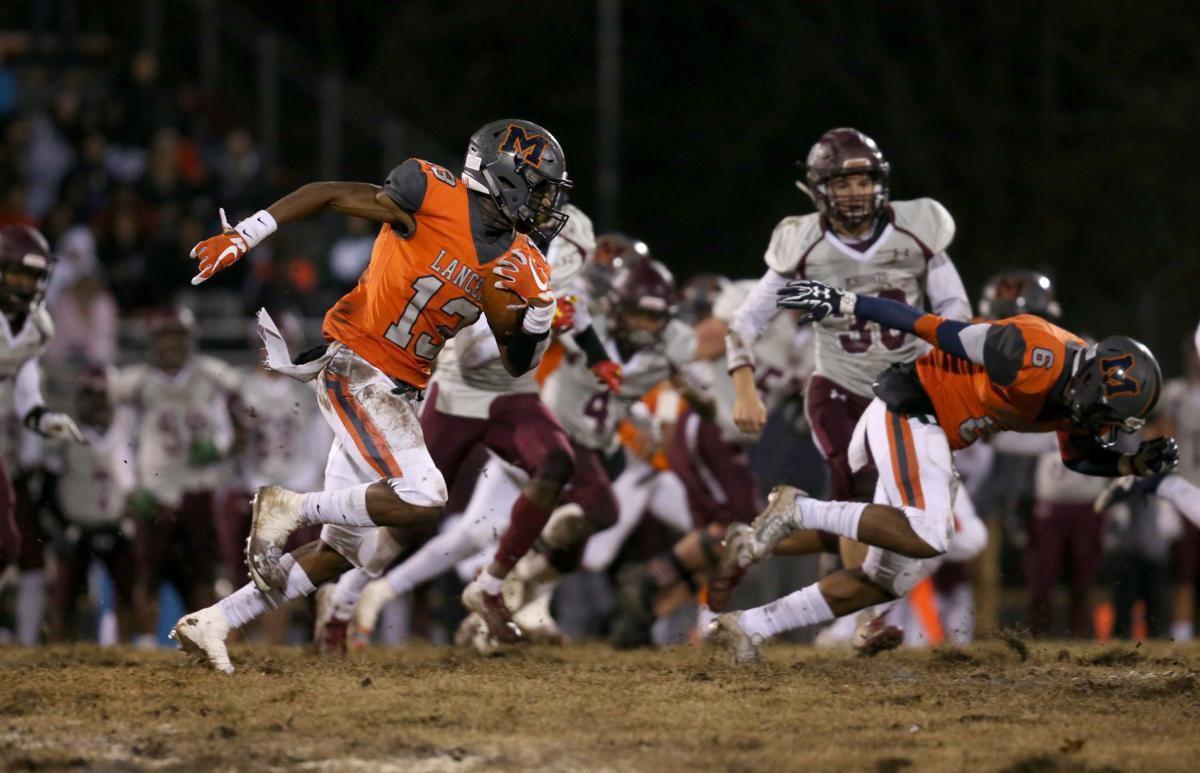 Manchester's Tre Clark takes off on a kick return during the second round of the Class 6 playoffs on Saturday, Nov. 17, 2018, against Thomas Dale.

A pair of sophomore defensive backs on the Liberty University football team announced Monday they are entering the transfer portal and leaving the Flames program because of “racial insensitivity” and cultural incompetence “in the leadership of the university.”

“My short time spent with the athletic department and most professors at Liberty University was much appreciated as it helped me improve my skills, gain new experiences, and meet a diverse group of friends,” Land, the program’s first four-star recruit out of Ocean Lakes High School in Virginia Beach, said in his statement. “Unfortunately, due to the racial insensitivity displayed by leadership at Liberty University, I have decided to enter my name into the transfer portal and no longer be a student-athlete at Liberty University. I pray that I am able to be provided with [an] opportunity at a new school that respects my culture and provides a comfortable environment.”

Clark, who attended Manchester High School out of Richmond and started seven of the team’s final 10 games of the 2019 season, released his statement less than 20 minutes after Land.

“I have decided to enter my name into the transfer portal and I will no longer be attending Liberty University,” the statement read. “This decision has been well thought out and prayed on. This decision is simply bigger than football or the program. The program, staff, and teammates were a complete blessing to my life. Over this year I have developed relationships that I will forever cherish and bonds that will not be broken. However due to the cultural [incompetence] within multiple levels of leadership, it does not line up with my code of ethics. So therefore I had to do what I felt like was right in my heart and I pray that you support me and pray for me as I find a new home to further my education and football career.”

The incident, which helped spark protests across the city and prompted at least four black employees to resign from the Christian institution, has trickled down into the athletic department.

Liberty football coach Hugh Freeze issued a statement June 3 following “incredible and eye-opening dialogue with our players and staff” in the wake of George Floyd’s death in Minneapolis, Minnesota. The statement called for "unity, compassion, and love" ... "in lasting change to racial injustice."

“I think every university has challenges at times because of the perception that somebody might have nationally or somewhere that’s different,” Freeze said Thursday during a virtual press conference. “My message simply has always been: Come and see, and come and see the great things our leadership has done, led by President Falwell, who has been incredible to our program and to me personally, and get to know exactly.

“Sometimes things are said or done that, in hindsight, I might say, ‘Man, I wish I would have said that differently or done that differently or not done that.’ I think all of us are in that boat. We live in an environment today where everybody’s opinion on whatever somebody else does, they can say it, whether it’s true or it’s not true, that they can say it. My message has simply always been: 'Man, come and see.'

“In my talks with my players, the issue around race is real. We are committed to being very open and transparent with our players and talking to them about any issue, and how we can understand and how we can help, and I’m thankful we’ve been able to have those honest conversations with our kids. I’m thrilled that the feeling among our team is that they haven’t felt anything but acceptance and grace here at Liberty University. That starts with our leadership. That’s the message that we have. Come get to know our people, not just what you read about them or see about them, but come get to know them.”

Falwell issued a lengthy apology earlier this month after he faced an avalanche of criticism following his decision to post a tweet aimed at undermining an order by Northam that masks be worn inside all retail stores, government buildings or while using public transportation to help slow the spread of the coronavirus.

“I was adamantly opposed to the mandate from @GovernorVA requiring citizens to wear face masks until I decided to design my own,” Falwell wrote in the May 27 tweet, which has since been deleted. “If I am ordered to wear a mask, I will reluctantly comply, but only if this picture of Governor Blackface himself is on it!”

Attached to the tweet was an image of a mask bearing a racist photo that appeared on Northam’s medical yearbook page and — when made public last year — sparked a scandal that nearly forced him from office. The photo showed a person in blackface and another in a Ku Klux Klan costume.

The controversial tweet did not have an impact on two players who have verbally committed to play for the Liberty football program beginning in the 2021 season.

Wendell McClain, a cornerback from Tift County High School in Tifton, Georgia, was the first cornerback to verbally commit June 10.

Nate Hampton, a three-star quarterback out of Davie County High School in Mocksville, North Carolina, verbally committed a little more than a week ago.

“Some of the media can flip some words. I try not to pay as much as attention to it,” he said. “That doesn’t change anything for me, to be honest with you.”

At least four black employees have resigned from the school in protest of the tweet, according to public posts and conversations with workers.

In response to Falwell, nearly three dozen black alumni penned a letter demanding Falwell immediately withdraw the tweet, calling it racist. The group denounced Falwell for what they said was “infantile behavior” and suggested he step down to focus on a career in politics.

On June 8, the same group sent a letter to Falwell thanking him for the apology. But they also urged him to surround himself with more ethnically diverse pastors and advisors.

Clark and Land were expected to be major contributors in the secondary for Liberty in the upcoming season. Clark was projected to start at cornerback, and Land was slated to play significant snaps at nickelback.

Jeremy Peters, a former cornerback at Liberty who graduated after the 2018 season, tweeted: “Another day, more athletes leaving Liberty smh! Hopefully they can hear us now.”

Clark posted 38 tackles and broke up six passes, and Land recorded 23 tackles and a fumble recovery during his freshman campaign.

The football program began voluntary workouts June 1, and the entire roster was on campus June 15.

The Liberty secondary lost two players, including a projected starter, to the transfer portal in late June. The coaching staff quickly has mad…

Brandon Robinson, who spent the majority of the 2019 season as Liberty’s primary backup quarterback, announced Monday on his Instagram page he…

Wendell McClain spent Monday morning on the football field at Tift County High School in Tifton, Georgia. He and his teammates, though, could …

Liberty freshman nickelback Tayvion Land (7) closes in on a play as teammates corral Buffalo running back Kevin Marks during the Flames' victory over the Bulls Sept. 14, 2019 at Williams Stadium.

Manchester's Tre Clark takes off on a kick return during the second round of the Class 6 playoffs on Saturday, Nov. 17, 2018, against Thomas Dale. 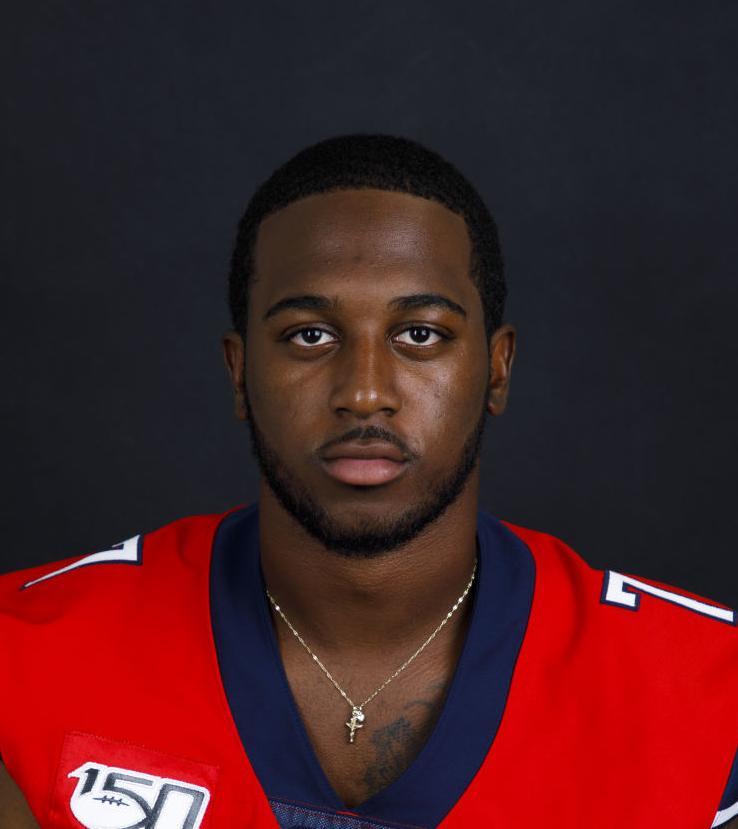 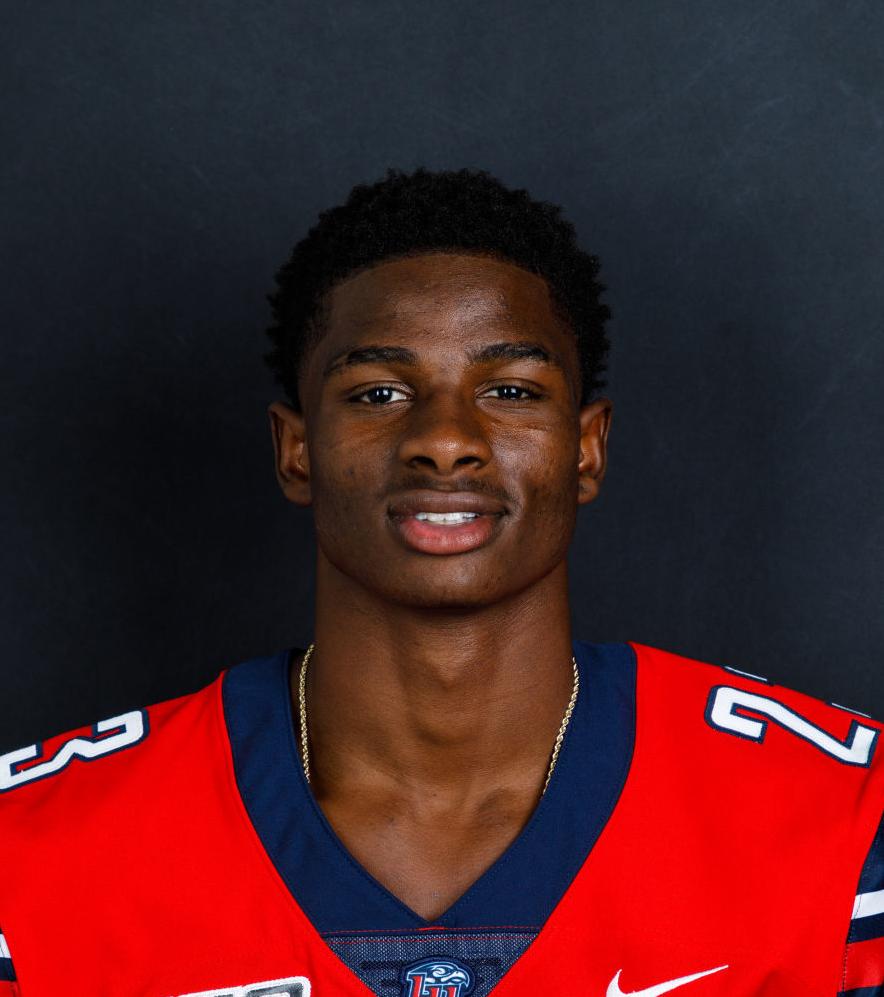