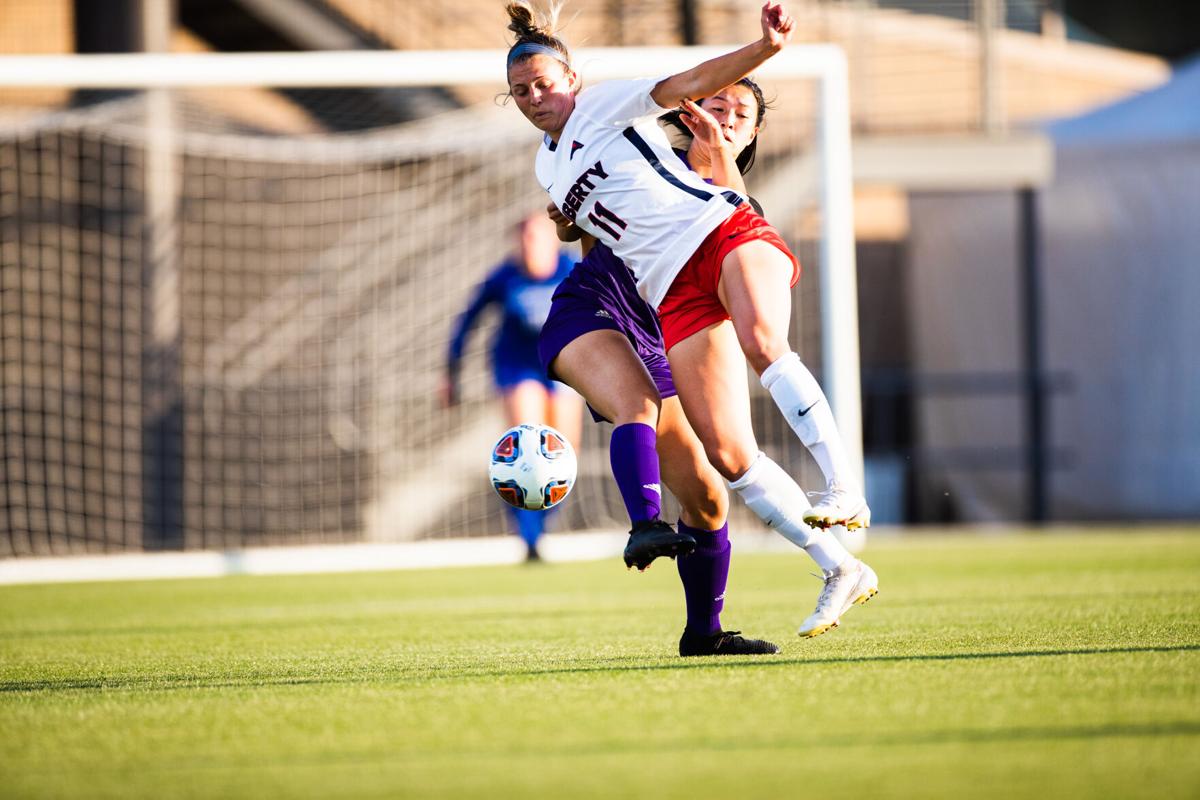 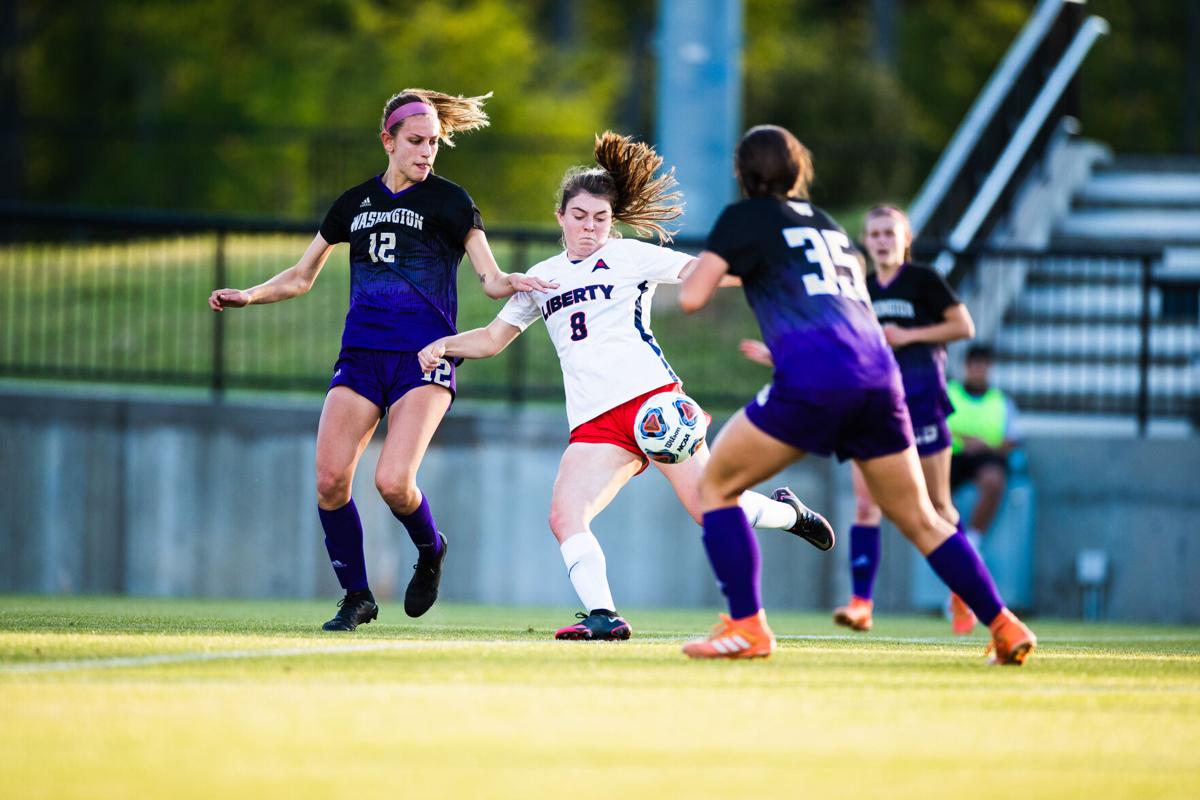 Liberty forward Chloe Marr (center) attempts a shot while under pressure from Washington’s Kala McDaniel and Laura Roberts (35) during the NCAA women’s soccer tournament first-round matchup at the Sportsplex in Matthews, North Carolina.

Lang Wedemeyer has preached to his young Liberty women’s soccer team this season the opening five minutes of each half, particularly to start a match, are vital. Those early moments set the tone, settle the butterflies circling in the stomach and allow a flow to develop on the pitch.

When those returning players finally sit down and digest how Tuesday’s NCAA Tournament first-round matchup against Washington played out, they’ll see how crucial it is to not surrender an early goal and give momentum to the other squad.

Washington midfielder Ameera Hussen’s goal 67 seconds into the match gave the Huskies the lead for good as they pulled away for a 3-0 victory over Liberty at the Sportsplex in Matthews, North Carolina.

“We didn’t come out as well as we needed to in that first five minutes. We gave them a little too much space than we should have,” Flames senior center back Cora Duininck said. “There were a couple of mistakes earlier that ended up leading into a domino effect, and then it was just a poor clearance, you lose your mark, and they’re going to take advantage of that.

The Huskies’ early attack led to Hussen’s goal. Washington made a concerted effort to get the ball into the 18-yard box, and a deflected shot near the right edge of the box rolled to Hussen, who delivered a one-timer to the lower left corner of the net that gave the Huskies a 1-0 lead.

The Flames (7-6-5) settled in and make adjustments and had their best chance to tally the equalizer in the 37th minute when Lissi Gordon’s shot from the left side of the box was punched away by Washington goalkeeper Olivia Sekany.

Liberty kept the ball on Washington’s side of the field for the next three minutes until Mary Johnston’s through ball to Karlee Stueckle down the right side produced some breathing room for the Huskies.

Stueckle barely had enough time to gather in the pass behind Liberty left back Sophia Palladino (Jefferson Forest) when she chipped a shot toward the net that barely cleared a diving Melody Jayroe. The ball took a big bounce and landed in the top left of the goal to give the Huskies a 2-0 lead in the 41st minute

“We were having a difficult time with their physicality and athleticism,” Wedemeyer said. “They were winning a lot of balls in the air and we were having a hard time solving that problem for periods of time in the first half.”

The Huskies put the match away in the 52nd minute off a set piece. Kaylene Pang’s free kick was directed to the back left of the box, and midfielder Olivia Van Der Jagt’s header found the back of the net for a 3-0 lead.

Washington held a 2-to-1 advantage on Liberty in shots (14 to seven) and shots on goal (six to three). Sekany and Caeley Goldstein (two saves) combined for the shutout.

Jayroe finished her collegiate career with three saves. Goldstein’s saves came in a three-minute stretch in which the Flames attacked.

McKinley Burkett, whose penalty kick in overtime lifted Liberty over Kennesaw State in the ASUN Conference title match, recorded a shot on goal in the 85th minute that Goldstein corralled.

Chloe Marr got off two shots (one on goal) in a two-minute stretch, and her second led to a diving save from Goldstein.

“I thought actually in the second half we were much, much better,” Wedemeyer said. “We switched a few things up, we possessed the ball, we created some really dangerous chances, and again we played right with them. Unfortunately we didn’t score when we needed to.”

Forward Bryson Spell officially signed his National Letter of Intent on Thursday and is the fourth and final member of Liberty's 2021 recruiting class that includes guards Brody Peebles, Joseph Venzant and DJ Moore.

Liberty, compared to the three at-large selections Iowa, Louisville and Northwestern, held the advantage in most every metric. The Flames ranked second in RPI, had the fourth toughest strength of schedule, and ranked fourth in average computer ranking.

“It’s a really exciting time,” Nicaise Muamba said Monday after the selection show. “The first time was really exciting, but now I get to share that with the whole team. That’s really much more special.”

Bishop-Riley never hesitated in returning to Liberty for her super senior season, and she has rewritten several pages in the Liberty record book. Plus, she also set a first in NCAA history.

Liberty kept getting runners on base against Breana Burke, but the Lipscomb starting pitcher found ways to escape jams and prevent the Flames …

Liberty (7-5-5) faces off against Washington (9-3-3) in the first round scheduled for 7 p.m. Tuesday at the Sportsplex in Matthews, North Carolina.

Breana Burke wildly jumped up and down just inside the pitching circle. Her Lipscomb teammates charged from the dugout and joined in on the ce…

It took Allie Schwab and Hanna Bishop 15 minutes to get into an offensive rhythm Friday night.

The thrill of Liberty’s 7-2 series-opening victory over Coastal Carolina on Friday night was not at the forefront of Scott Jackson’s mind as he made a walk down the hallway toward the athletic trainer’s room.

Liberty forward Chloe Marr (center) attempts a shot while under pressure from Washington’s Kala McDaniel and Laura Roberts (35) during the NCAA women’s soccer tournament first-round matchup at the Sportsplex in Matthews, North Carolina.