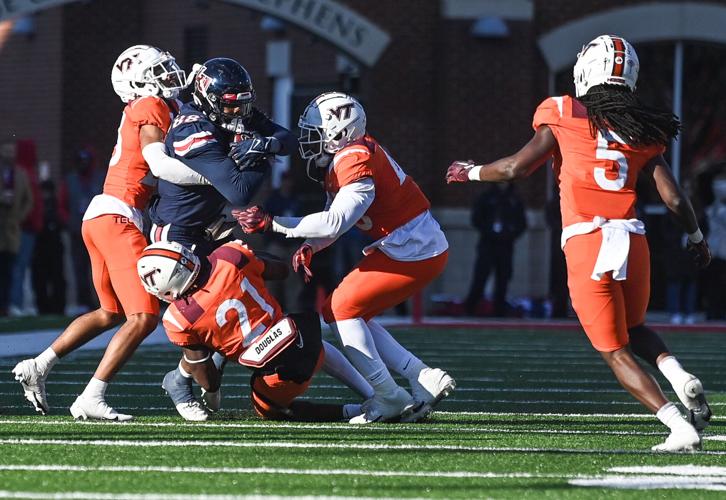 Liberty tight end Jerome Jackson protects the ball after a reception as a host of Virginia Tech defenders attempt to bring him down at Williams Stadium on Saturday. 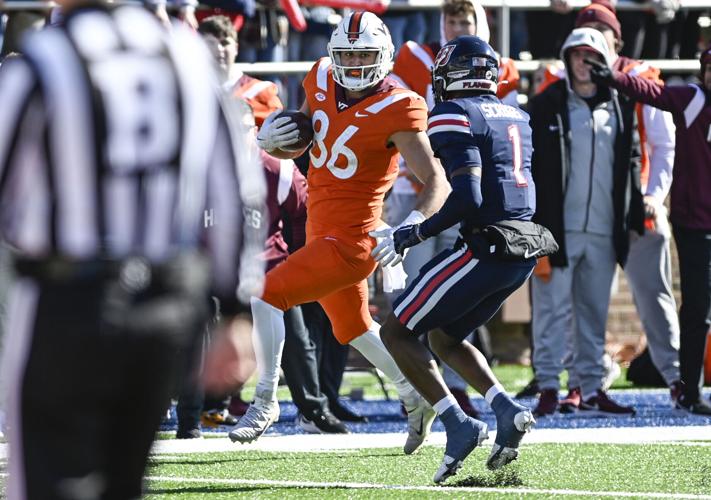 DeMario Douglas hadn’t had much time to process Saturday’s loss to Virginia Tech when the wide receiver turned his attention to Liberty’s regular-season finale. The fourth-year sophomore wasn’t thrilled with losing a second straight game in agonizing fashion, and he thought back to how the 2021 regular season unfolded.

“We’re going to pick it up. We’ve got this last game at home, but we can’t leave a bad taste in our mouth,” Douglas said after the 23-22 loss to the Hokies. “It can’t be like last year where we lost the last couple of games.”

The Flames ended the 2021 regular season on a three-game losing streak, to be exact, and the final two setbacks in that streak came at Williams Stadium.

The end of 2022 is unfolding in a similar fashion. Liberty was 8-1 and ranked 19th in the Associated Press Top 25 poll after posting impressive victories over BYU and Arkansas, but a three-point loss at UConn was followed by the one-point home setback to Virginia Tech.

Douglas said he sensed the loss at UConn was a possibility because of a slow Thursday practice. He added it was the exact opposite leading up to the matchup against the Hokies, with a Thursday practice with great energy.

“From a players’ standpoint, I think a lot of guys started to get content and weren’t being as bought in as we had hoped,” punter Aidan Alves said. “We’re hoping to just really throw all this junk behind us and the next game’s the most important game.”

That led to Flames coach Hugh Freeze spending Monday morning’s team meeting trying to find what was the difference between how his team performed against the Cougars and the Razorbacks compared to the losses against the Huskies and the Hokies.

He played back the ending of both the BYU and Arkansas games to show the team the postgame celebrations, and then the dejection of the setbacks in the past two games.

Freeze wanted to know what the difference was between those marquee victories and narrow losses.

“That’s the question I think a coach has to answer because I go through it all in my mind, because nobody hurts or feels the sting more than I or wants the responsibility more than I. Is it that simple or is there something else? Are we unmotivated?” Freeze said. “We’re the toast of the town and I’ve said before you have to handle successes and failures equally the same, they both can be your enemy. I said we’ve got to find out. If it’s as simple as we’ve got to go to work and go to practice and let’s play better Saturday, but if there’s something else that is causing us to be undermotivated or less passionate about competing for 60 minutes, then we’ve got to address that.”

Freeze turned to the 12-member culture council to address the team. That group includes the likes of Douglas, Alves and free safety JaVon Scruggs (Appomattox), three players who experienced the end of the 2021 season when the Flames came up short against Ole Miss, Louisiana and Army.

Douglas and Scruggs saw the hurt the losing streak inflicted on the seniors from that team, and how losing in their home finale was not how they wanted their time at Liberty to conclude.

That is the message Scruggs conveyed to the rest of the team. The 21 players being honored on Senior Day, including Scruggs, want their final memory at Williams Stadium to be a victorious one that helps the team reach the nine-win mark.

“I’m telling them why we should do that, why we should want this, and guys like myself and Durrell [Johnson] and all those other guys that put the time in here before and just seeing this thing get on an uphill climb,” Scruggs said. “It was really a good dialogue because we’re not a coach-led team; we’re a player-led team. That’s what ultimately set us apart from all the other teams and ultimately that’s what set us apart from all the other teams that we’ve had here at Liberty in the past to now, we’re more of a player-led team now.”

The losses to end the 2021 campaign were a bit more lopsided than this season’s down-to-the-wire setbacks. The Flames lost at Ole Miss by 13, then turned around and lost at home by 28 and 15 points to Louisiana and Army, respectively.

The losses to the Ragin’ Cajuns and Black Knights featured Liberty getting off to slow starts and frantically trying to get back into the game in the second halves.

Liberty, this season, has been in contention to win in the fourth quarter of the past two losses, but the offense couldn't generate a late drive to either tie or take the lead.

The council wanted to make sure the team wasn’t dwelling on the past two losses but on rebounding, like it did after an early season loss at Wake Forest when the Flames responded by rattling off six straight victories.

“I think that everyone just needs to own up to the mistakes that were made and move on,” right guard Cooper McCaw said. “You’re not going to get anywhere if you keep the past in mind. You’ve just got to own the film, fix the mistakes that were made last week and move on and do everything you can this week to fix those things and make it a goal to correct them in the next game.”

Liberty became bowl eligible more than one month ago after a one-point win over Gardner-Webb. (Speaking of the Runnin’ Bulldogs, they won the …

Durrell Johnson has become a menace for opposing offensive coordinators during the past three weeks. The Liberty defensive end totaled 9.5 tac…

Bollinger taking advantage of his opportunities in Liberty's offense

There’s a trivia question that has made the rounds in Lynchburg in recent years: Who secured the catch in the 2018 season finale that allowed …

There were various reports from national college football writers linking Liberty coach Hugh Freeze to the vacancy at Auburn.

Liberty and New Mexico State are meeting on Thanksgiving weekend for the third time since 2018. The two institutions, separated by more than 1…

Virginia Tech took advantage of the Flames’ quarterbacks losing two fumbles in the fourth quarter and secured the marquee win of Brent Pry’s first season at the helm.

Liberty hopes to send seniors, like Scruggs, out with a win over New Mexico State

JaVon Scruggs has walked onto the Williams Stadium turf 29 times throughout his career at Liberty. Seventeen of those walks have come as a cap…

Liberty tight end Jerome Jackson protects the ball after a reception as a host of Virginia Tech defenders attempt to bring him down at Williams Stadium on Saturday.