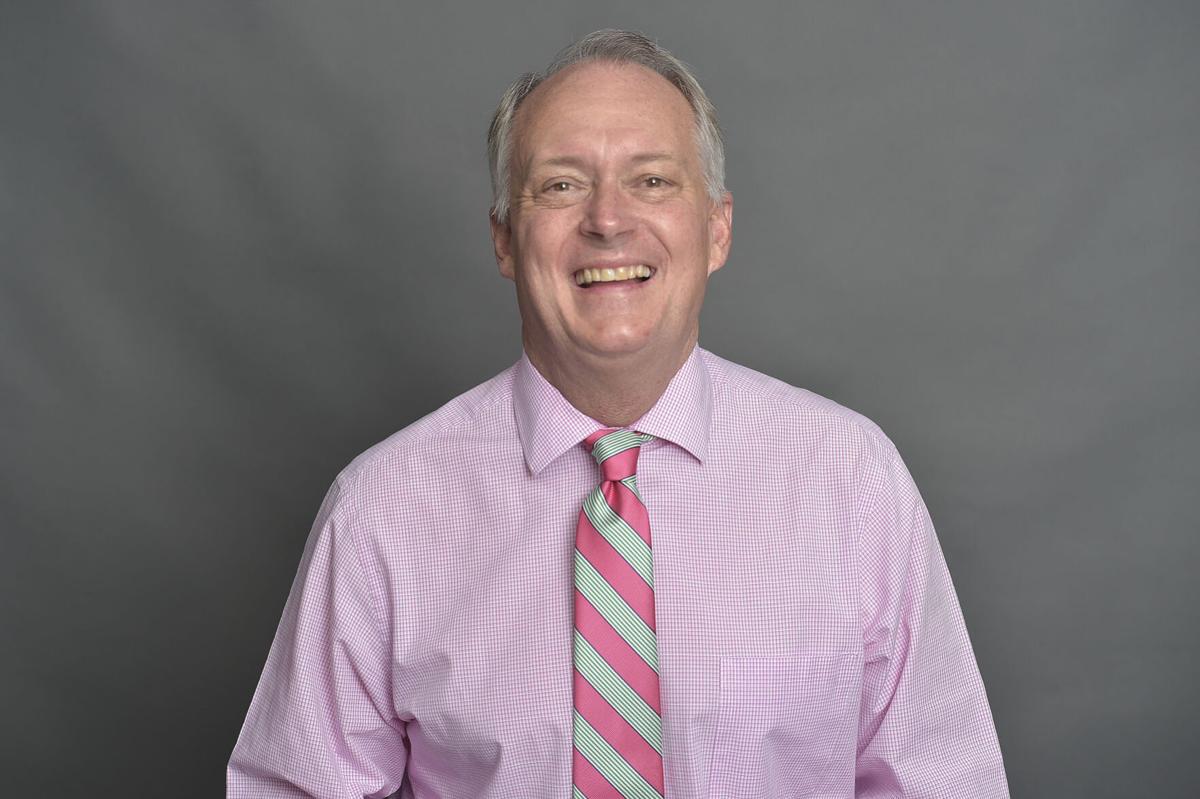 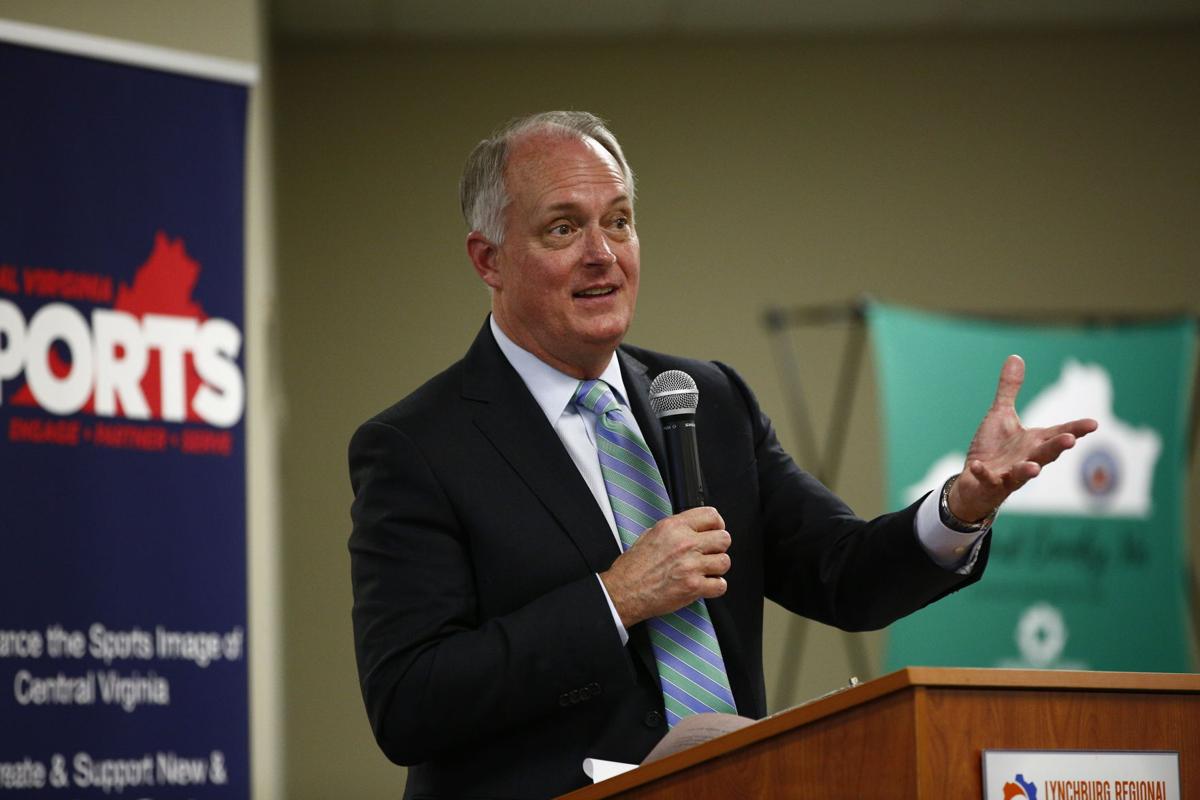 Dennis Carter, former ABC 13 sports director, speaks during a dinner in his honor at the Lynchburg Regional Business Alliance in Lynchburg on Sunday, Feb. 16, 2020.

He’s back in the saddle again — part-time, anyway, and not on television. Instead, he’s returned to the medium he used to jumpstart his career more than 40 years ago.

Less than nine months after he signed off for the final time as sports director and capped a 36-year career at ABC 13, Carter has signed on again, this time alongside anchor Rich Roth on “The Sportsline,” which Friday wrapped its first week at its new home on 105.9 WLNI-FM. The show runs from 5 to 7 p.m. Monday through Friday.

Retirement just didn’t suit Carter too well. He was happy spending more time with his wife, Regina, and his father, Lewis, who lives in Danville, where Carter got his start in radio on WBTM by writing 30-second commercials and eventually hosting a three- to four-minute sports segment during evening commutes.

But after leaving WSET at the end of 2019, Carter realized something was missing. The retired life, combined with the coronavirus pandemic, left him feeling a little stir-crazy.

“This gets me out of the house and out of my wife’s hair for a few hours,” the affable Carter said of the new gig. “I really missed being part of the sports scene, so this is the perfect opportunity for me to dive back in.”

Roth, who co-owns WLNI along with “Morningline” co-host Mari White, is excited to get “The Sportsline” running again. The show had several homes over the years, including at WLNI, 100.9 WIQO-FM and 93.3 FM.

In its current format, Roth said “The Sportsline” will focus mostly on Lynchburg-area sports. He’d thought for years about hosting a show with Carter. One day after Carter retired, Roth gave him a ring.

“And Regina [Carter] said, ‘How quickly and for how long can you get him out of the house?’” Roth recalled with a laugh.

For Carter, nothing can take the place of TV. After a four-year stint on radio and at the Danville Register & Bee, he began his television career — for which he seemed destined — at WSET in 1983.

Now, the part-time radio work offers him a chance to break free from his just-the-facts TV persona. He can offer his opinion, add commentary and laugh and joke more often.

“I needed to lighten up a little bit, to be honest,” Carter said. “I think at first I was a little too tight, afraid to give my opinion because that was different. But Rich has loosened me up a bit, because he knows our job is not just to give the facts but to entertain people. They might be in their cars after working a long day at the office and they want to be entertained a little.”

Or as Roth put it, “an escape from reality.” He believes he and Carter already have developed a strong chemistry for listeners seeking to unwind.

So between interviews last week with people like Frank Beamer and Anthony Poindexter, listeners got to know Carter a little better.

“One of the things we learned this week is that Dennis can’t swim,” Roth said. “It’s one of those things you never would have guessed. … Now he has a chance to cut loose a little bit. He’s got a great personality and great sense of humor.”

Throughout his television career, Carter was a frequent guest on local sports radio shows. But his role then was as a reporter; now he’s a host who’s gone from packing information into a two- or three-minute TV segment to stretching material out across a two-hour time slot.

The new format may take some getting used to, Carter noted, but Roth said the show has “a nice flow and feels natural.”

And Roth is happy to have a future hall of famer on board. “He is Lynchburg sports,” Roth said.

Carter was to be inducted into the Virginia Sports Hall of Fame in April, but the ceremony was postponed indefinitely because of the pandemic.

In addition to the show’s college and pro mix, Carter hopes to talk about local high school sports, one of his passions.

Roth, who owns the rights to “The Sportsline,” signed off from a different station on Jan. 31, 2019. Now he has Carter as a sidekick on WLNI, which features news/talk programming during the day and covers roughly a 50-mile radius that includes Lynchburg and surrounding counties.

And Carter is happy to return to the sports scene. He missed everything about it: the thrills of Friday nights, the connections with athletes and coaches and the camaraderie with co-workers.

“Once you’ve done something for so long,” he said, “it gets in your blood.”

One of the year's best feel-good stories has met the cold realities of the NFL.

After Further Review: A highlight-filled Week 1

Mistakes were in abundance. So were the heroics.

First the "Redskinettes" and later "The First Ladies of Football," for the first time since 1962 the Washington Football Team won't have cheerleaders this season.

Football teams in the Seminole District are scrambling to find replacement games after E.C. Glass and Jefferson Forest suspended their seasons…

Dennis Carter, former ABC 13 sports director, speaks during a dinner in his honor at the Lynchburg Regional Business Alliance in Lynchburg on Sunday, Feb. 16, 2020.