It's been nearly a year since high school sports returned following a 10-month pandemic layoff.

Much took place during that time. School boards argued about the return to athletics, setting different standards on return-to-play policies. Athletes slowly started trickling back into gyms and fields. And many returned to form while navigating a world that looked much different than it had previously. The year also produced lengthy virus layoffs and season-ending quarantine periods for athletes across the area.

It was a year of disappointment and uncertainty, elation and heartbreak, determination and grit. And playing in the middle of a pandemic amplified all those emotions.

After being diagnosed with multiple myeloma in the fall of 2020 and then undergoing rounds of intense treatment, Raiders football coach Doug Smith returned to the sideline this fall for the first time since the 2019 season.

Smith — who coached remotely when Appomattox won its fifth state title in six years during in the abbreviated spring campaign — was excited to return, and the beloved coach was welcomed back with open arms.

"Man, I love this," Smith said at practice one August afternoon as he prepared Appomattox for its first game of the season. "Just because of what God has done in my life, I want to explode and overflow to these guys what he's doing for me. And that's thankfulness, gratefulness, never take things for granted and just love every moment, good and bad."

Smith initially had been burdened by his cancer diagnosis, but the coach who has been outspoken about his beliefs relied on faith during those uncertain times.

Everyone, it seemed, from fans and players to opposing coaches, were glad to see the coach return. In the fall he led ACHS to an 11-2 record and a trip to the Class 2 state semifinals.

The Heritage phenom captured seven state titles during her junior year, setting up the possibility of a massive senior campaign. She won three titles during the Class 3 indoor championships in March (triple jump, long jump, 55 dash) before leading Heritage to the team title at the outdoor championships in June. On that hot at LU's track & field complex, Oakes won the triple jump, long jump and 100 dash and accounted for 46 of Heritage's 74 points by herself.

Her junior year was exceptional. Oakes became an all-American for the third time, performed at the AAU Junior Olympics in Texas and attended an elite invite-only triple jump academy Sioux Falls, South Dakota.

Another thrilling moment took place early this month when Oakes signed her national letter of intent to Stanford University, surrounded by her family, friends and coaches.

Before she heads out west, Oakes has one more year to showcase her talents. Heritage track coach Don Alexander, a student when Heritage opened in 1976 and a coach at the westside school for decades, spoke about Oakes at her signing.

"I've seen all the athletes come through," Alexander said, "and I'm just gonna dub her as the top athlete to come through here."

The Red Devils put together an incredible 17-0 season last spring, led by UVa signee Eden Bigham, who threw four perfect games, five additional no-hitters and posted a 0.07 ERA, good enough for the VHSL record book. One of those perfect games occurred in the state semifinals.

As dominant as Bigham was, Rustburg found itself embroiled in a fight in the state championship late in June. Bigham and New Kent's Gracie Ellis went toe to toe from the circle for six full innings. But the Red Devils finally got to Ellis in the top of the seventh, and catcher Carly Hudnall delivered the go-ahead single. Bigham shut the door in the seventh with three strikeouts to give her 16 on the day, and Rustburg won 1-0.

It was RHS's first softball championship since 1997. Appomattox and Amherst also won softball titles in sterling fashion the same day, making for a busy evening on the high school circuit.

Megan Knight accomplished something in June that no other female from Lynchburg and its surrounding counties ever had: she won a Virginia High School League state singles title.

At E.C. Glass, female athletes have been trying break through that glass ceiling for decades. Glass had won state team titles and doubles championships, but Knight was one of three athletes who had come up short in their state singles bid before June.

And 2021 was the year Knight put the past to bed. She defeated Hanover's Raine Weis, her greatest rival. Knight had dreamed of revenge since her 2019 title loss to Weis. When she got her chance, the Hilltoppers standout took advantage.

"I guess it's proof to any girl out there that they can do it," Knight said of her title. "I'm not tall, I'm not tanned. I have fair skin and red hair. I'm very petite. I don't look like a tennis player. But any girl that wants it, they can definitely go get it."

E.C. Glass' DJ Best was a healthy 33-year old boys basketball coach when he was diagnosed this summer of Wegener's Disease, a rare autoimmune disorder. It was a jarring revelation for the Virginia Beach native, who served as an assistant for several years at Glass before taking over for longtime coach Roy Roberson in 2019.

Best got sick in July and eventually had to be admitted to the hospital, where during the course of an almost two-week stay, he was placed on a ventilator and into intensive care.

After a lengthy recovery period, Best has returned to the sidelines for Glass. He already has missed a few games because of further procedures, but the Hilltoppers are playing for their coach this season, and together their bond is growing closer.

"It's a chance to say we can't take anything for granted," Best said. "We can't take plays off. We can't take games off. And I think that will tie into us playing extremely hard this year."

'I hope the kids are ready to rock and roll': Heritage and E.C. Glass to clash Thursday

The rivals meet at Heritage at 6 p.m. Thursday for the final time of the 2021-22 regular season.

Heritage senior Kyle Ferguson scored a career-high 30 points and went 14 of 17 from the free-throw line.

A rundown of the day's area high school events. 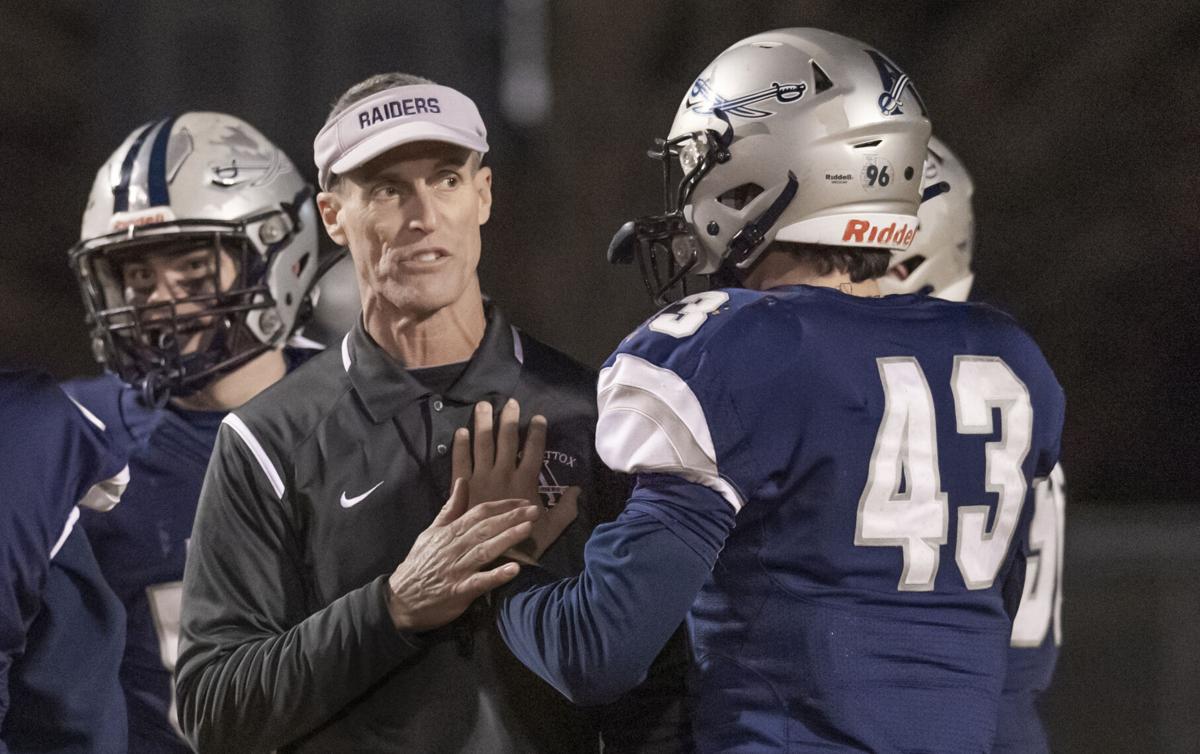 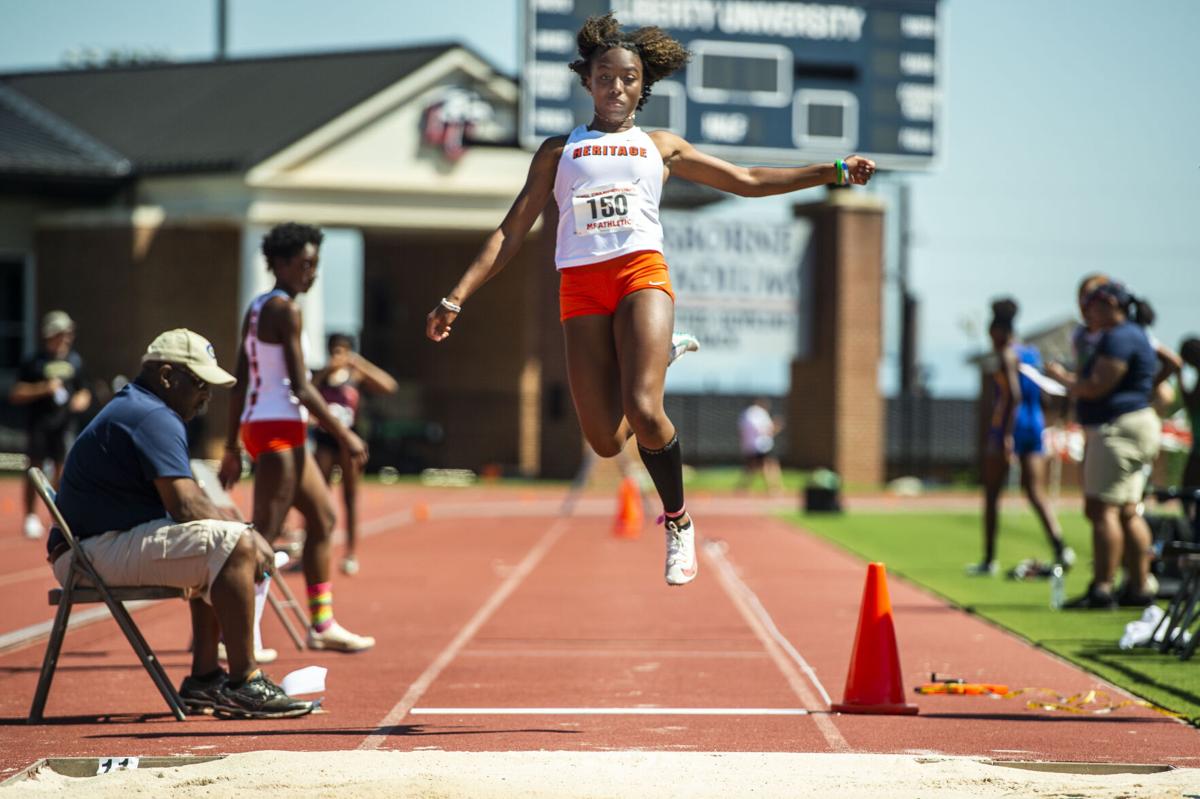 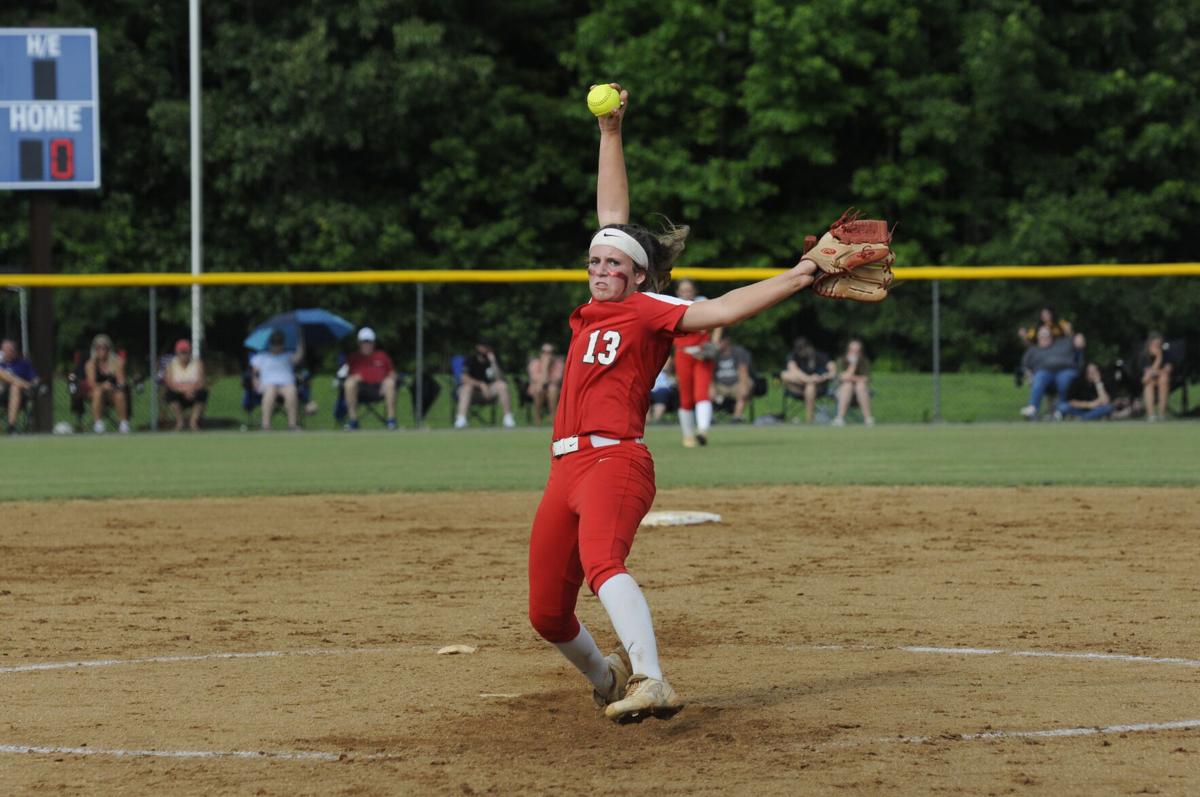 Rustburg's Eden Bigham winds up at the Class 3 state championship game in June. 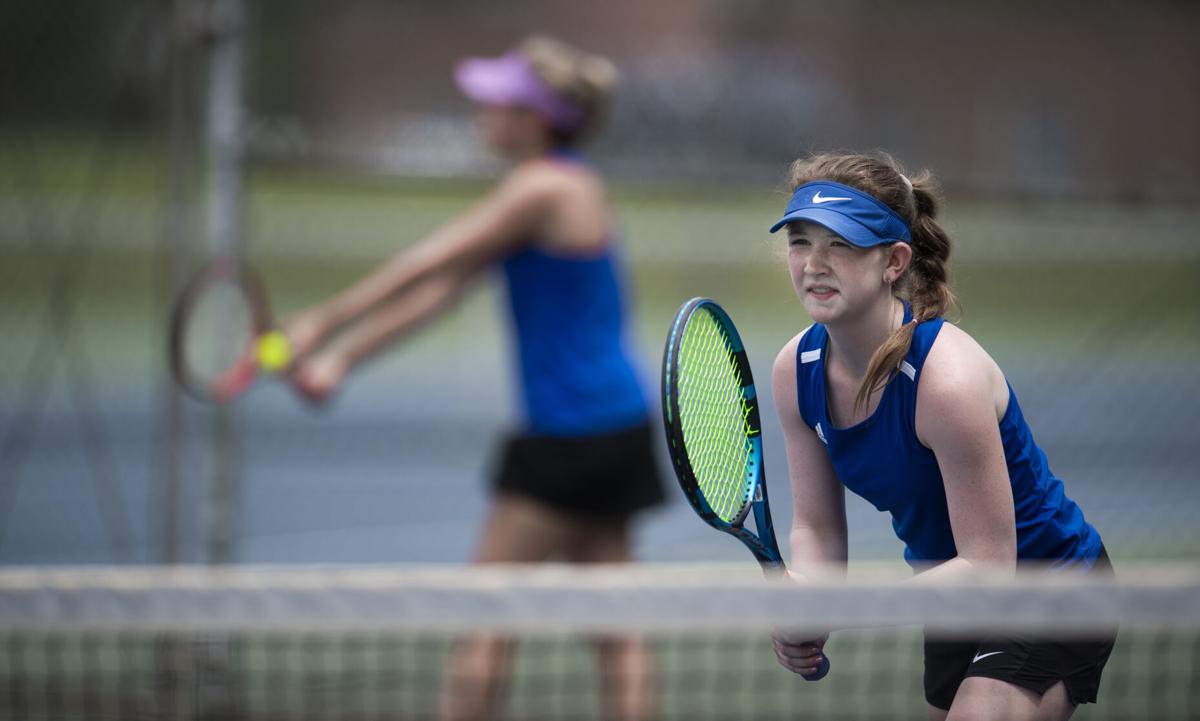 Megan Knight (right) plays at the net as her doubles partner, Grayson Laughon, prepares to serve in the Region 4D doubles semifinals in June. 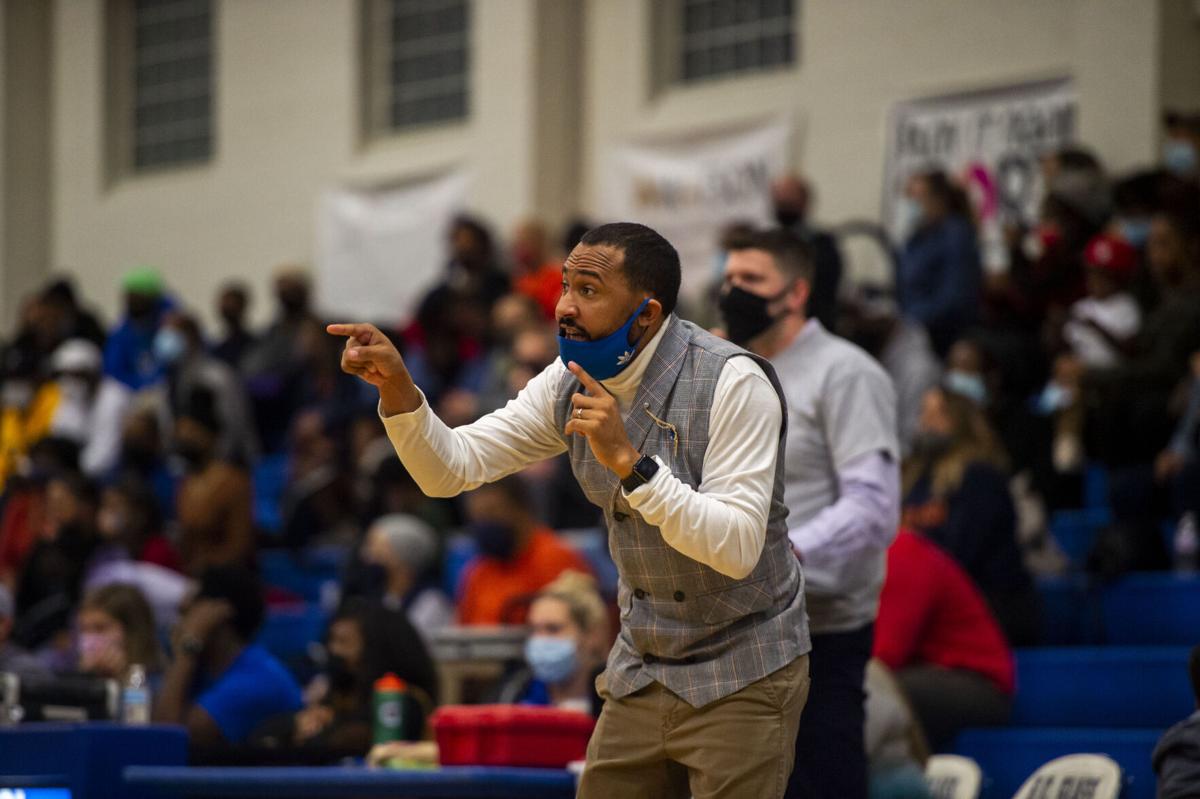 E.C. Glass coach DJ Best instructs his players during a game against Heritage at McCue Gymnasium on Dec. 6.