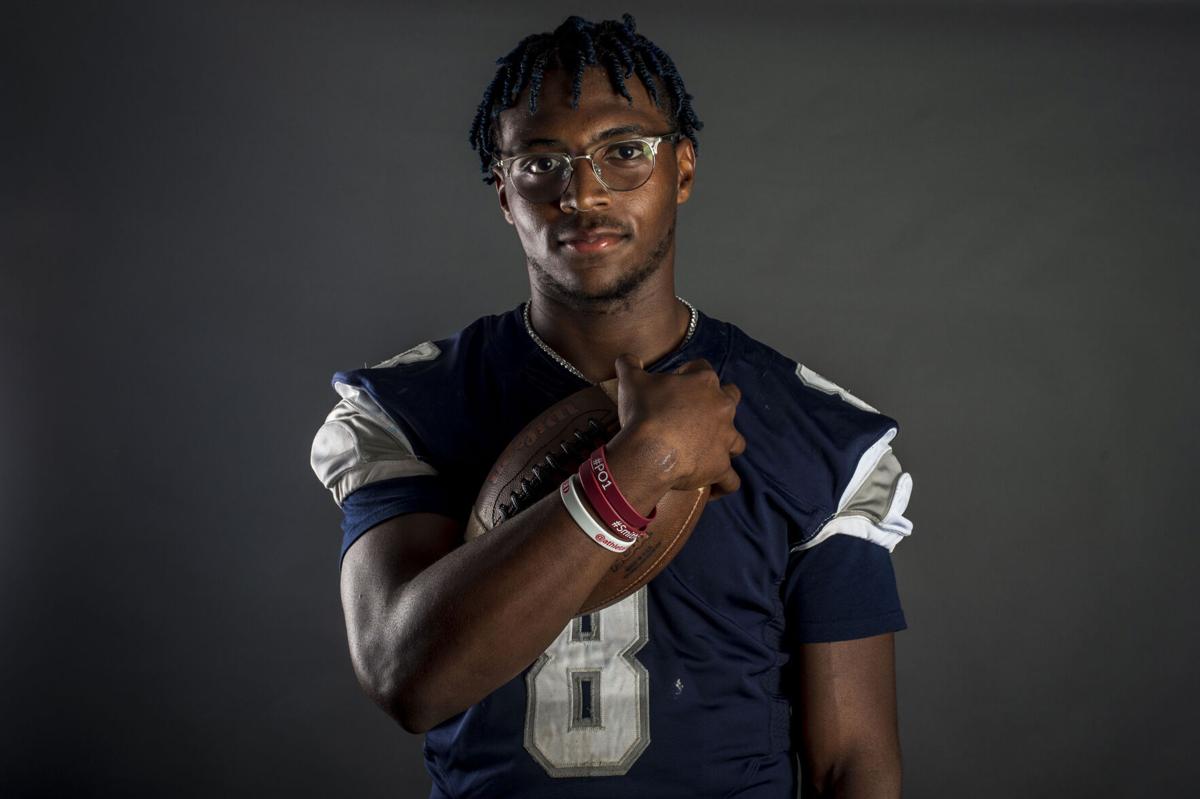 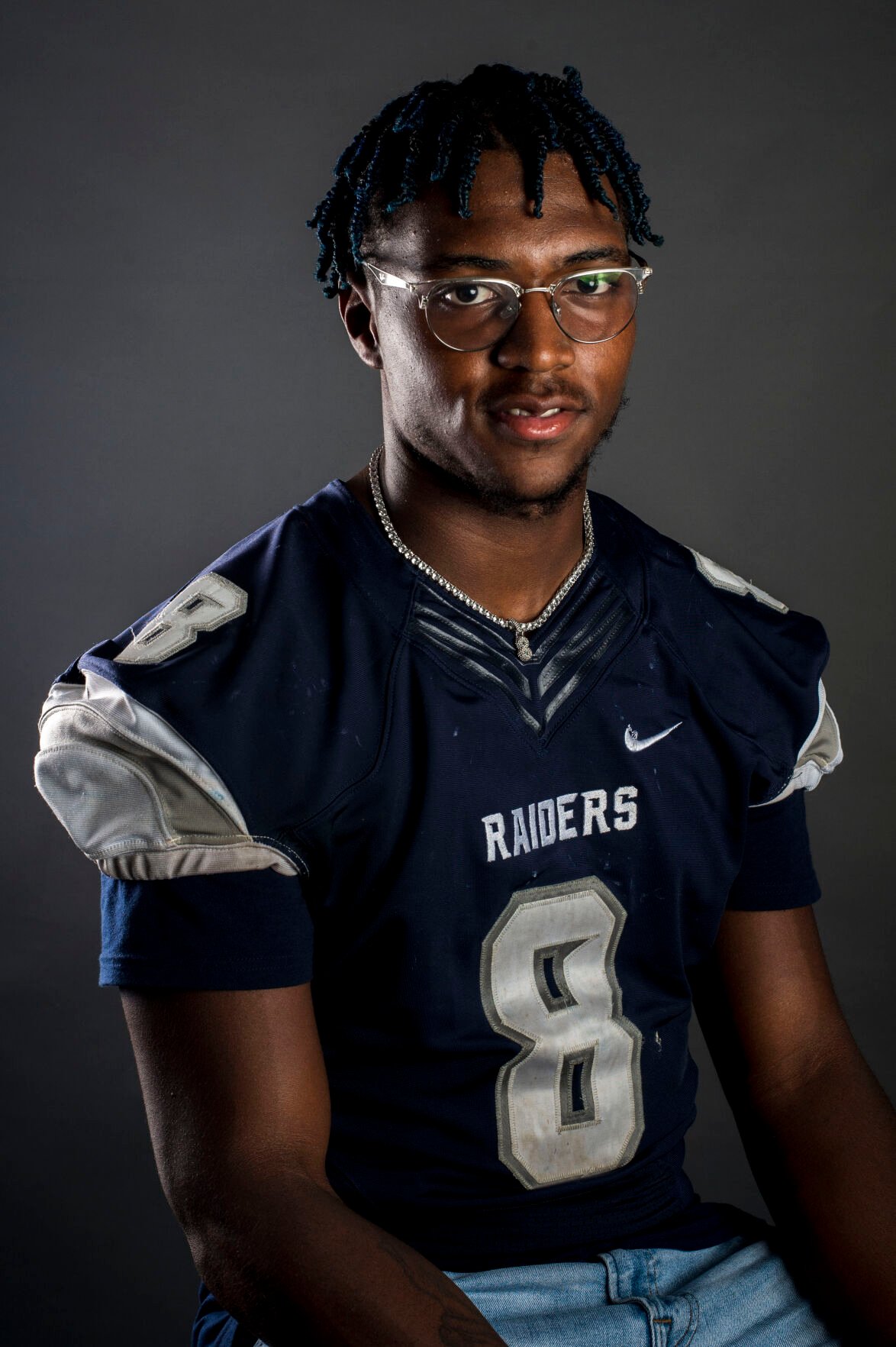 ALL-STAR STUFF: Tre Lawing commanded the Appomattox offense at quarterback as an underclassman, but his play as a junior was otherworldly. He rushed for 592 yards in 10 games (on 73 attempts for an average of 8.1 yards per carry) and threw for 562, tallying 1,154 all-purpose yards. Lawing accounted for 27 touchdowns (15 rushing, 12 passing) while also taking on extra defensive duties. In short, he was everywhere. On a sun-splashed day in May at Stuarts Draft, Lawing helped Appomattox bring home its fifth state championship in six years when he accounted for three touchdowns (two passing, one rushing), rushed for 63 yards and threw for an additional 63. On defense, he finished the season with 50 tackles (33 solo, 17 assisted), seven tackles for a loss, one fumble return, one interception, six passes defended and one blocked punt. The guy who folks in Appomattox knew would be a standout varsity player long before he arrived in high school lived up to his potential, and heads into his senior season as one of the area's most dynamic playmakers to watch. In the spring season he was reliable, a durable leader who stayed cool in the clutch and willed Appomattox to victory.

ALL-STAR STUFF: The 6-foot-2 commander of LCA's offense committed to UVa this spring and led the Bulldogs to a 6-2 season and a trip to the Class 3 state semifinals. ... Had a 60% passing rate (61 of 101) and threw for 851 yards and 11 touchdowns. ... A first team all-Lynchburg Area all-district member.

ALL-STAR STUFF: Led the Raiders with 594 rushing yards on just 48 attempts for a whopping 12.4 yards per carry. ... Also scored 11 touchdowns across 10 games. ... Scored Appomattox's first touchdown of the day in the state championship game and added a 40-yard fumble return for another score in the third quarter.

ALL-STAR STUFF: Led the Pioneers in rushing by churning up 680 yards on 78 carries, good enough for an 8.7 yards-per-tote average. ... Also led the team with 13 touchdowns and was a member of the all-Lynchburg Area coaches second team.

ALL-STAR STUFF: Tallied 723 rushing yards on 97 carries (for 7.4 yards per carry) and scored 10 touchdowns. ... Was the engine that moved LCA's high-powered offense forward. ... Was named team MVP and was an all-Lynchburg Area coaches selection at outside linebacker.

ALL-STAR STUFF: Put together a sensational senior season by leading Appomattox with 208 receiving yards off only eight catches, for a 26-yard average. ... Also scored three touchdowns, one of which occurred in the Class 2 state championship game.

ALL-STAR STUFF: Led a Brookville corps that made waves all season by posting 415 receiving yards and scoring three touchdowns. ... Scored a 97-yard touchdown on a pass from Drake McDaniel. ... A Division I recruit and a first team all-Lynchburg Area honoree in the Seminole.

ALL-STAR STUFF: A three-year starter and multi-time all-district and all-region performer with multiple FBS and FCS offers, including Army. ... Made 15 catches for 193 yards and three touchdowns.

ALL-STAR STUFF: At 6-foot-5, 295 pounds, is a high-level recruit and ranked the No. 1 offensive tackle in Virginia and 12th nationally for the Class of 2022 by 247Sports. ... Holds offers from all across the Division I landscape, including Alabama and Notre Dame.

ALL-STAR STUFF: Was named a first team all-Lynchburg Area offensive lineman for the Seminole District and provided pivotal play on the line with his 5-foot-11lm327-pound frame.

ALL-STAR STUFF: Has served as a critical part of William Campbell's offense and defense for the last four years and altered opponents' plans with his 6-2, 253-pound frame. ... Received multiple Division I and II offers during his high school career.

ALL-STAR STUFF: Named a first-team all-Virginia High School Coaches Association member at OL after earning those same honors for the VASCA all-Region 2C team. ... As a two-way player, also racked up 34 tackles, five for a loss and two sacks for the Raiders.

ALL-STAR STUFF: Scored four touchdowns off returns for the Pioneers. ... Was selected as the all-Lynchburg Area Seminole first-team kick returner. ... Had one kickoff and three punt returns for scores and averaged 22 yards per return. ... Has returned seven kicks for touchdowns in his varsity career.

ALL-STAR STUFF: Put up mind-blowing numbers for the Raiders by returning five kicks for a whopping 320 yards, good for a 64-yard average per return. ... Also returned two of those five kicks for touchdowns.

ALL-AREA DEFENSIVE PLAYER OF THE YEAR

ALL-STAR STUFF: Every team that went against Brookville in the pandemic-abbreviated spring football season found out one thing: Lance Blankenship was a beast. The defensive tackle, who signed his National Letter of Intent in late May and then left for Harrisonburg after the school year ended to begin training at James Madison, turned up the turf in his senior season. He was voted defensive player of the year on the all-Lynchburg Area team (selected by coaches from the Seminole District) and finished the season with 50 tackles (31 solo, 19 assisted) and a team-high 17 tackles for a loss, while adding four sacks, a forced fumble and a fumble return. He even contributed on offense with 58 rushing yards on 10 attempts and a touchdown. He also moved to left tackle at one point during the season, when Brookville needed that spot filled because of an injury. "And he freakin' manned up the whole night," Brookville coach Jon Meeks said at the time. That's the type of player Blankenship proved himself to be during his high school career — a guy who would give his all and do anything that was asked of him to bring his team success.

ALL-STAR STUFF: Provided pivotal play for LCA on both sides of the ball and at defensive tackle was key to a defense that allowed just 12.7 points per game. ... Has received multiple all-district and all-region honors in addition to the Division I attention he's received from the some of the best programs in the country.

ALL-STAR STUFF: Racked up 54 total tackles, 11 for a loss, and added three sacks, one force fumble and a whopping five fumble recoveries across 10 games. ... Also delivered a 70-yard punt in the state championship game that pinned Stuarts Draft deep in their own territory in the fourth quarter, resulting in a key three-and-out. ... Took home first-team DE honors in Region 2C for the Virginia High School Coaches Association.

ALL-STAR STUFF: Finished the season with 40 tackles (32 solo) and put on a show in his senior year with 10 tackles for a loss, 15 QB hurries, three sacks, three caused fumbles, two fumble recoveries and one pass break-up. ... Was a first team selection on the all-Lynchburg Area coaches team for Seminole District players.

ALL-STAR STUFF: Used his 6-foot-3, 230-pound frame to lead the Bees with 65 total tackles (18 solo) and added 10 tackles for a loss and a QB hurry. ... Was a first team all-Lynchburg Area selection after helping BHS hold opponents to single digits in three of seven games.

ALL-STAR STUFF: Second on his team with 61 tackles (22 solo) and also finished with 12.5 tackles for a loss, 2.5 sacks, a QB hurry and two forced fumbles. ... A first team all-Lynchburg Area coaches team selection.

ALL-STAR STUFF: Was named the Region 2C player of the year by the Virginia High School Coaches Association. ... Intercepted five passes in 10 games and defensed 10 passes. ... Returned two of those interceptions for touchdowns and was everywhere on the field, with a team-high 76 tackles (a whopping 42 solo), one tackle for a loss, two fumble returns, one blocked return touchdown and two blocks on special teams. ... Also earned VHSCA all-state honors first team on defense (DB) and on offense (at kick returner).

ALL-STAR STUFF: Used his 6-5 frame, 190-pound frame to haul in three interceptions, one of which he returned for a touchdown and defend eight passes. ... Also wrapped up 44 total tackles (27 solo), had two tackles for a loss and two fumble recoveries.

ALL-STAR STUFF: Finished with 45 tackles (an eye-popping 40 were solo). ... Also had a forced fumble and a sack while garnering first team all-Lynchburg area honors at DB.

ALL-STAR STUFF: Was a mainstay for the youthful Hilltoppers, providing quality kicking and punting duties. ... Delivered some massive kicks in his senior season to pin the opposition and give Glass' defense good field position. ... Was a soccer standout as well, earning first team honors in both sports for the Seminole District.

ALL-STAR STUFF: Returned several punts for touchdowns in his junior season and provided dynamic play to put LCA's potent offense in strong field position. ... Also handled kickoffs for the Bulldogs and was so strong that teams tried to avoid kicking the ball in his direction.

ALL-STAR STUFF: Took on additional defensive duties this year and stood out on that side of the ball, too, with 50 total tackles (33 solo), seven for a loss, six passes defended, one block on special teams and one fumble recovery for a touchdown. ... In addition to being names VHSCA offensive player of the year, was also first team VHSCA all-state and al-region defensive all-purpose selection.

ALL-STAR STUFF: The Raiders defensive coordinator, who authored the defense Appomattox has found so much success in since 2015, stepped into the role of interim head coach during the spring season because coach Doug Smith was undergoing treatments for multiple myeloma and unable to attend games. While Smith coached remotely during games, Castello took over in person on the sidelines and ran day-to-day operations. In research conducted this spring, this reporter could find no other instance in the history of high school sports in Virginia in which a interim coach won a state title. Castello, it appears, made history when Appomattox defeated Stuarts Draft in May to claim their second straight state title and fifth in six seasons.

Are the Green Bay Packers pretenders?

Could Arkansas keep their impressive start going against Texas A&M (-4.5)?

Could Arkansas keep their impressive start going against Texas A&M (-4.5)?

The White Sox are AL Central Champs, but can they make a run?

The White Sox are AL Central Champs, but can they make a run?

ICYMI: A look at all of The News & Advance's All-Area teams and athletes of the year for the winter, fall and spring high school seasons i…