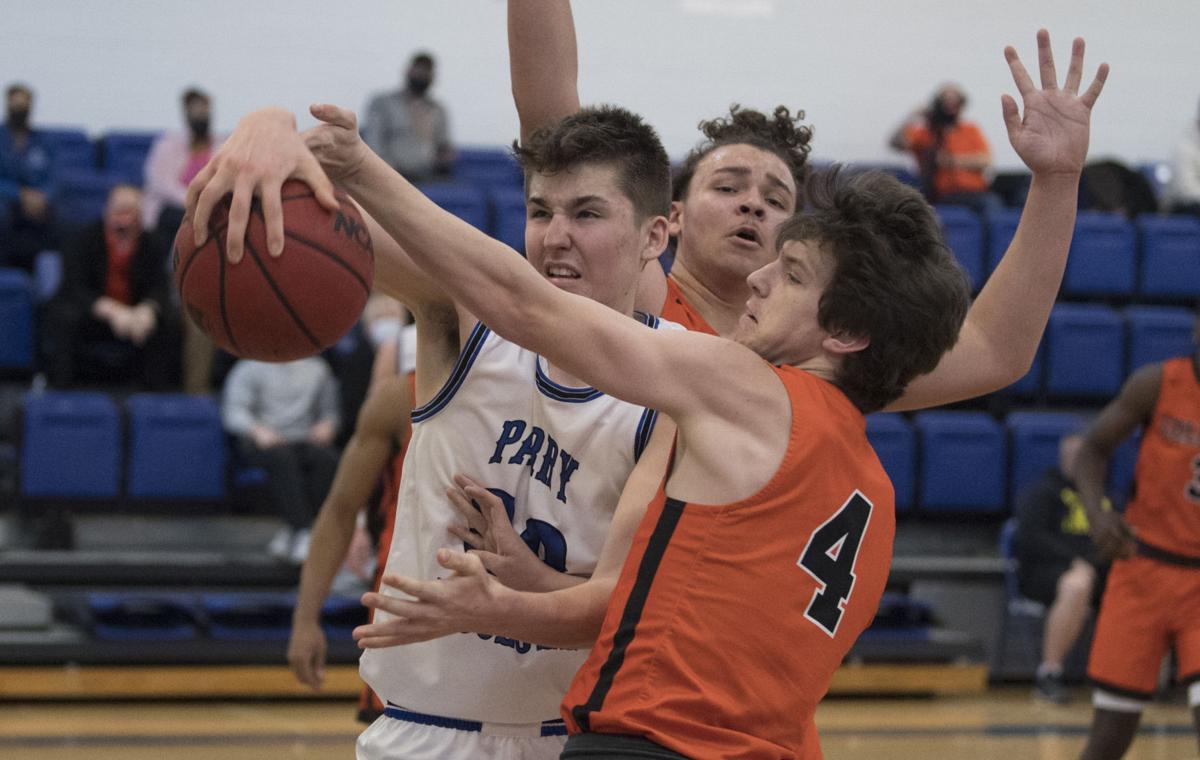 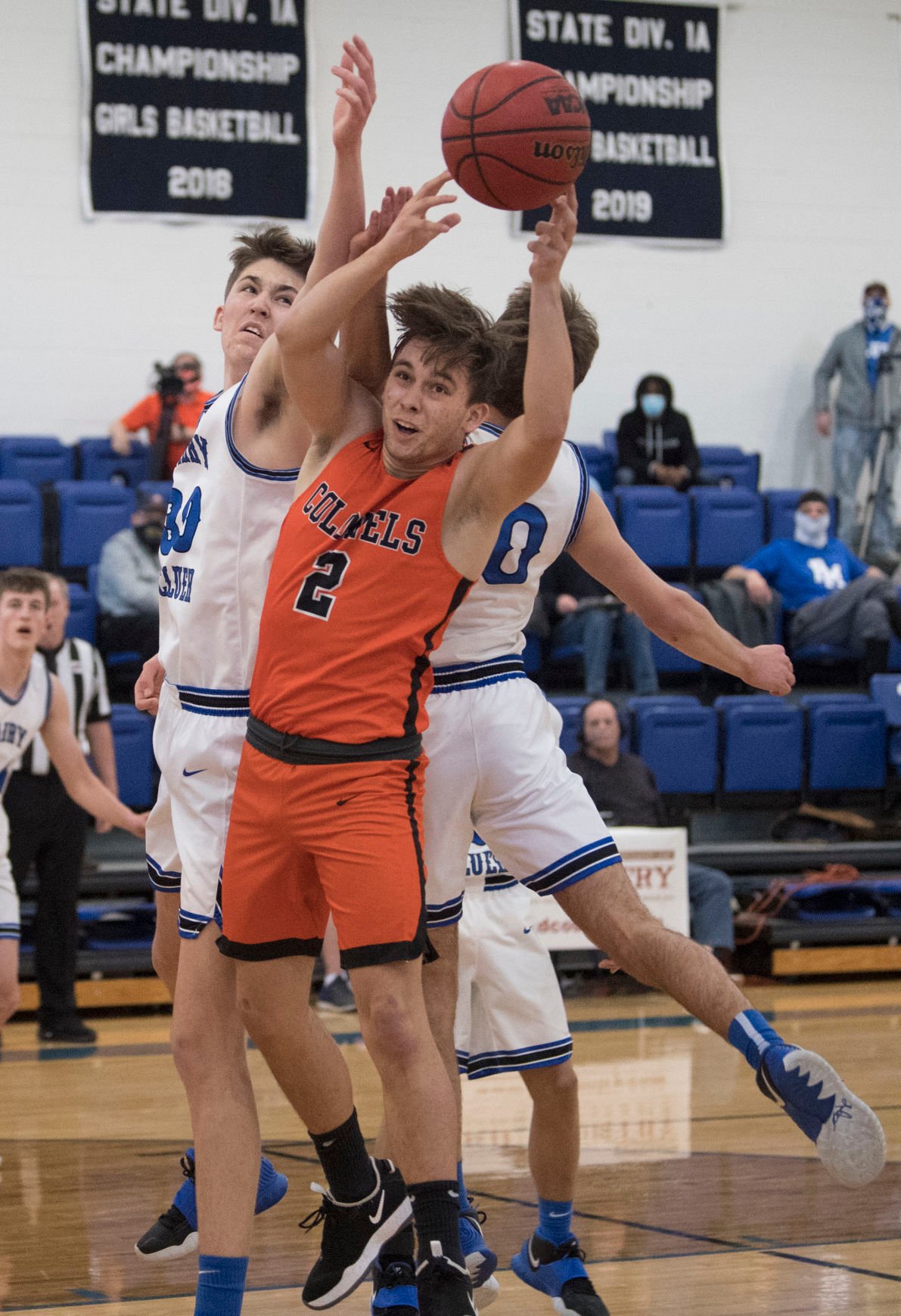 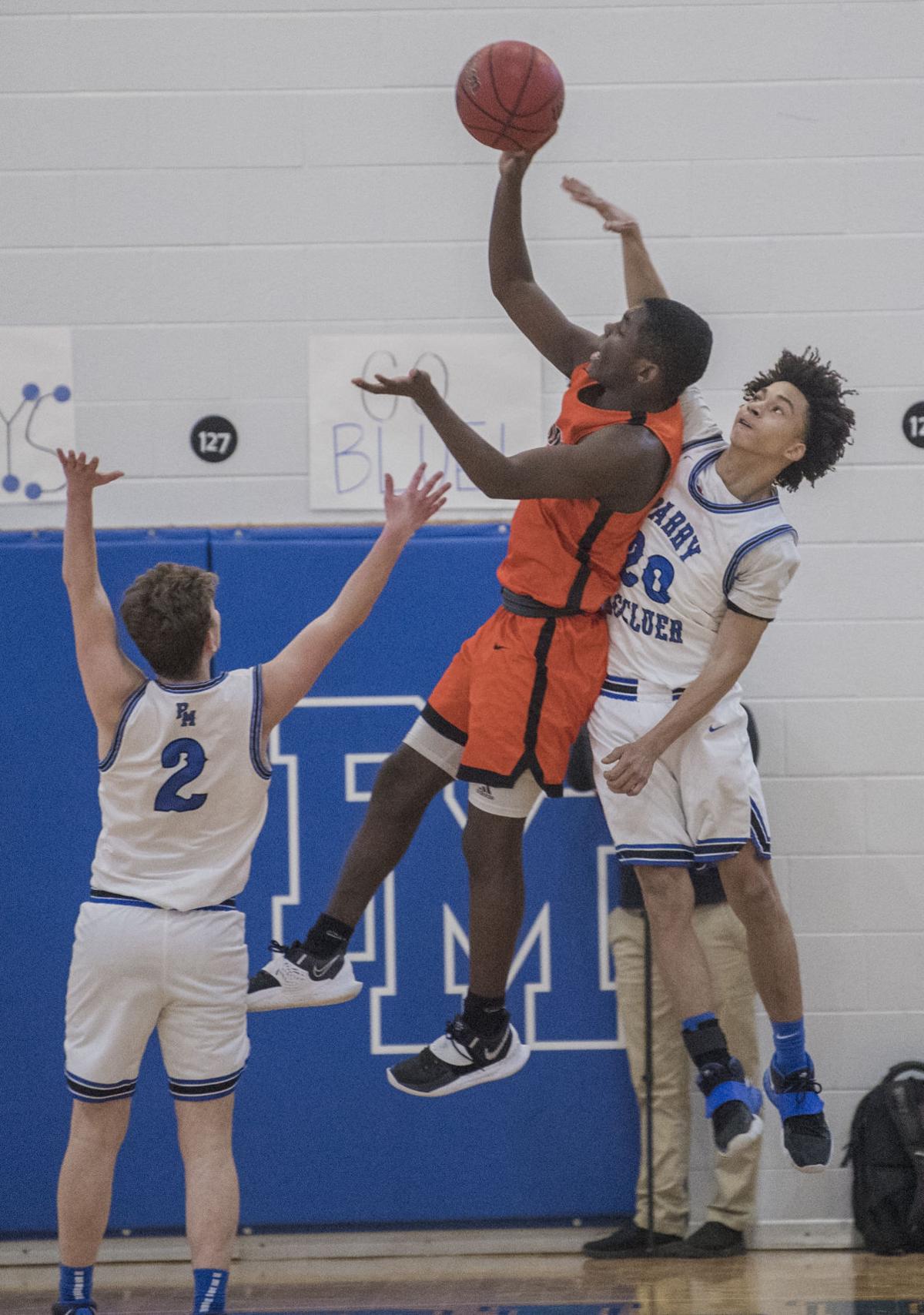 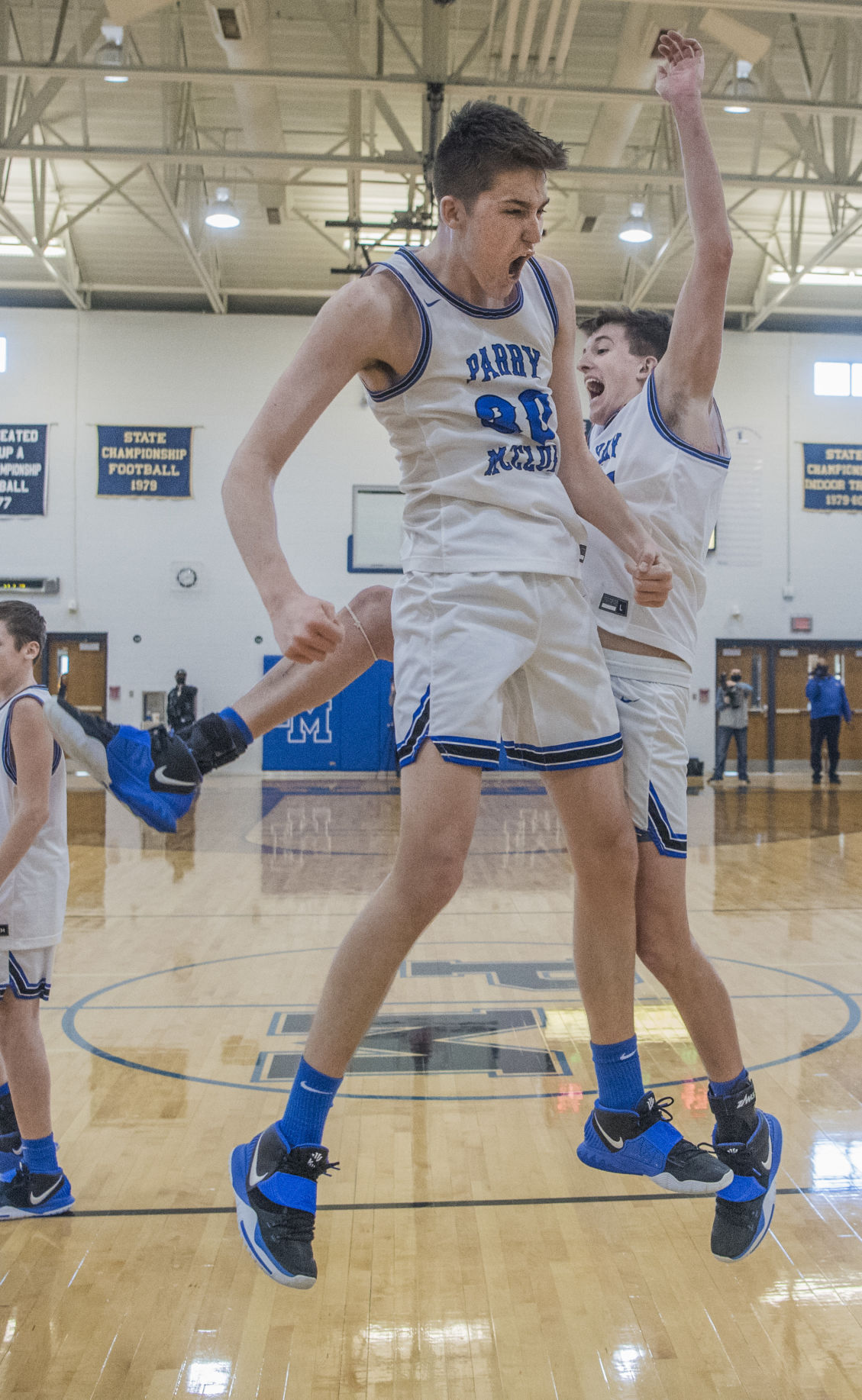 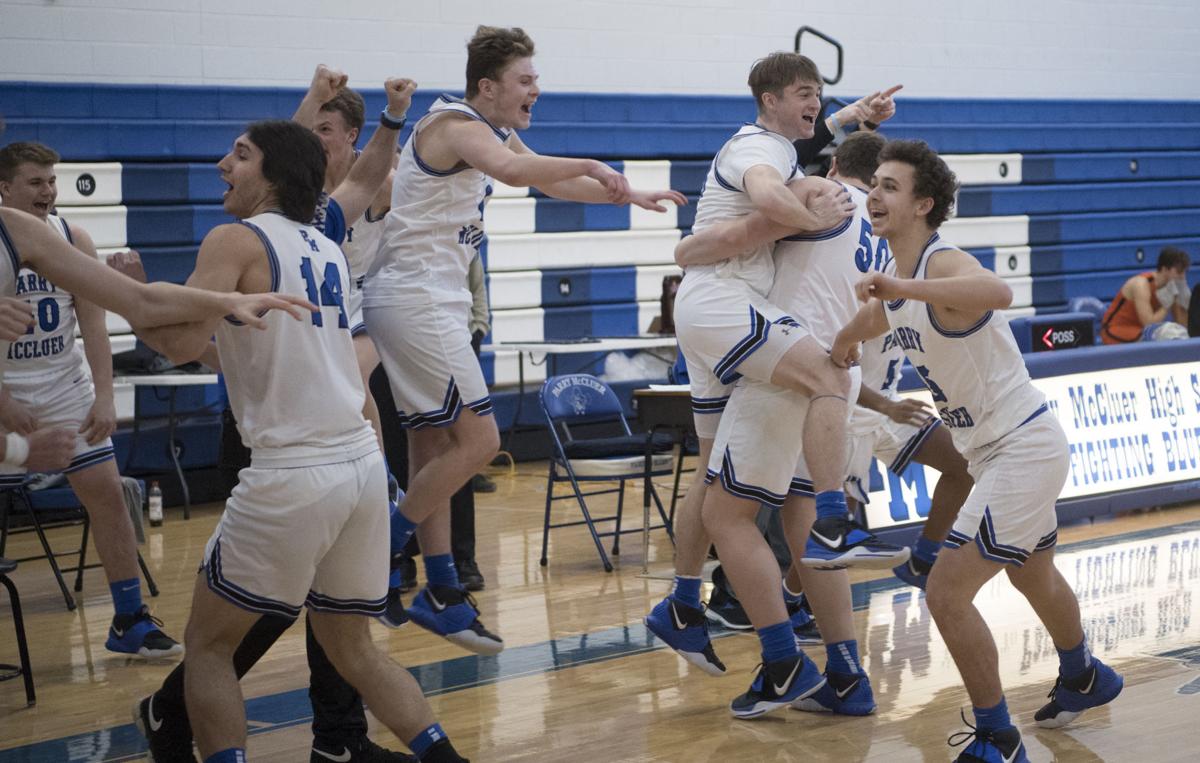 The Fighting Blues were the state runner-up in 1959, ’61 and ’94. Then there’s the famous 1977 state semifinal that went to five overtimes, the longest state game in VHSL history. Cartolaro played in that one for Parry McCluer and watched J.J. Kelly come away with the win.

The long drought is over. Six years after leaving Altavista, where he brought home four state titles as a coach before eventually becoming head coach at his alma mater, Cartolaro put the Fighting Blues in the winner’s circle.

Parry McCluer put together a strong second half to overwhelm Altavista, 56-39, in Saturday’s Class 1 state championship.

McCluer (16-1) erased an eight-point first-quarter deficit by outscoring the Colonels 13-3 in the second quarter and then poured it on in the third with a 24-point frame.

The Fighting Blues were led by 6-foot-11 center Spencer Hamilton, who shot up like a weed during his freshmen and sophomore years. He’s now a junior, and people in Buena Vista say he’s still growing. On Saturday, he finished with 17 points, eight rebounds, five blocks and two assists.

And that was after Altavista (9-5) held him in scoreless in the first quarter and most of the second. Hamilton didn’t score until 50 seconds before halftime, when his layup gave McCluer its first lead of the game at 17-15.

“Hamilton is tough, man,” Altavista coach Casey Johnson said. “He’s skilled and big. You just don’t find that. You can talk about it, you can’t show that in practice, how big he is. And then he’s hitting tough baseline shots that are going in. And you just have to tip your hat to that guy.”

After Hamilton’s lackluster first half, Cartolaro often positioned the big man in the corner, away from the basket so he could drive or shoot mid-range shots.

“He said my game would pick up, and it did,” Hamilton said.

Sophomore forward Stuart Hunt led the Colonels with 16 points. He drained four 3-pointers to help Altavista stick around. Despite McCluer’s onslaught, Altavista only trailed by nine with 1:28 remaining in the third. But Hamilton owned the post, McCluer senior Will Dunlap heated up in the second half to finish with 12 points, and the Colonels missed some easy transition buckets that could’ve turned things in their favor.

Altavista swarmed McCluer players with zone pressure and traps, but didn’t consistently get the types of turnovers throughout the game it caused in the first quarter, when the Fighting Blues turned it over four costly times.

Jayllen Jones and Marquel Dawkins finished with six points apiece for Altavista. Jones, a football and track star, played in his final high school basketball game after hitting a buzzer-beater Wednesday that vaulted his team into the state championship game.

“We’re just proud that we actually made it here,” Jones said. “And I know my guys are gonna be even better next year. And they will get back here and they’re gonna keep going.”

It was a respectable, if not admirable campaign by Altavista, which emerged as a serious contender after three straight losing seasons. The run to the title game was particularly enthralling, as the Colonels dispatched two opponents to claim the region crown, then erased a 13-point third-quarter deficit in the state semifinal.

“They have nothing to feel bad about. ... They got to the state finals. That’s an unbelievable accomplishment. They need to be proud,” Johnson said.

Jones was the last Altavista player out of the locker room after the loss.

“It’s been a great season with this group of guys,” he said.

“They’re all very welcoming and very hardworking. They make this team seem like a real, true family, and I’ve proud to be with them.”

It was the fifth state title for Cartolaro, the coach who is closing in on 600 victories. Never fair to say which one was the sweetest, because they all were special in their own way. But this one felt extra rewarding for the decorated coach.

“I’m just blessed,” he said, “and it almost feels like a dream.”

His players, he pointed out, are a close-knit bunch.

They’d likely celebrate the title together throughout the night.