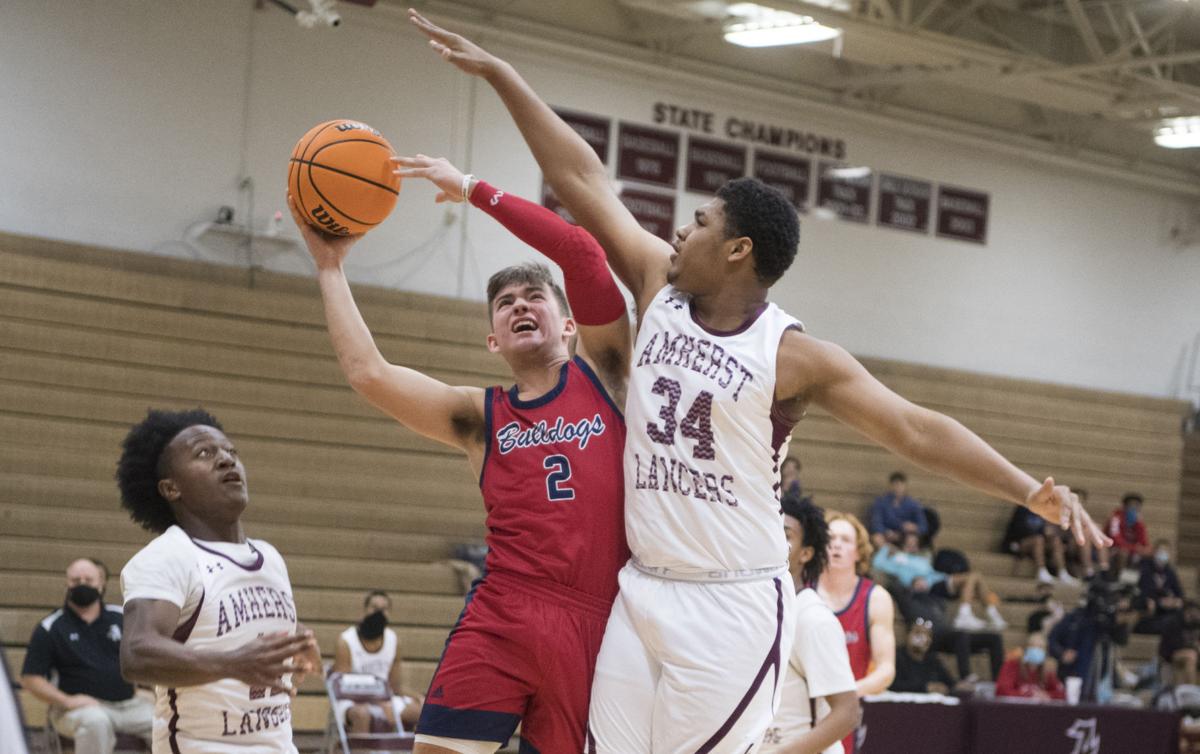 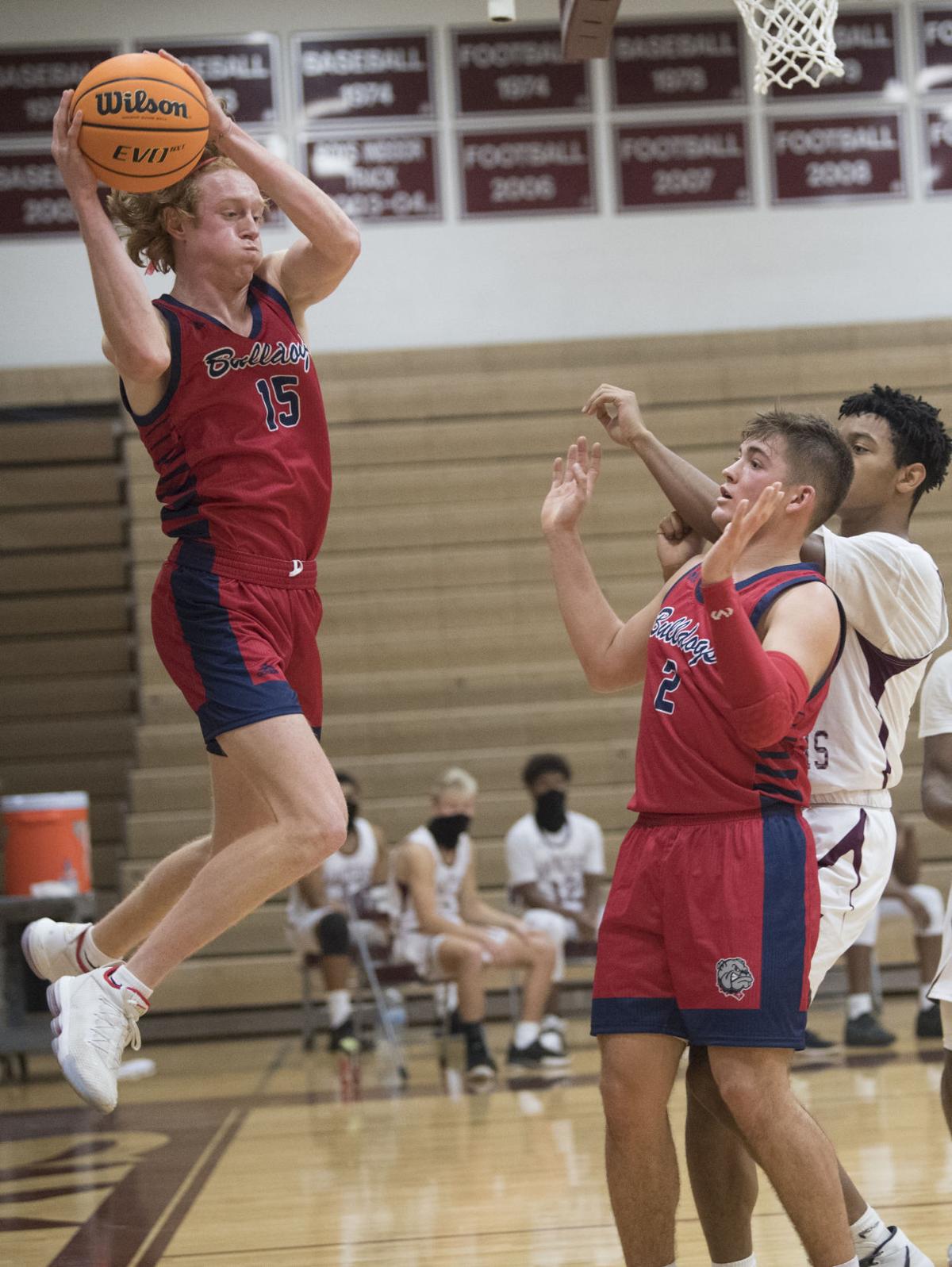 LCA forward Sully Holmes leaps to save ball from going out of bounds during Thursday's game at Amherst. 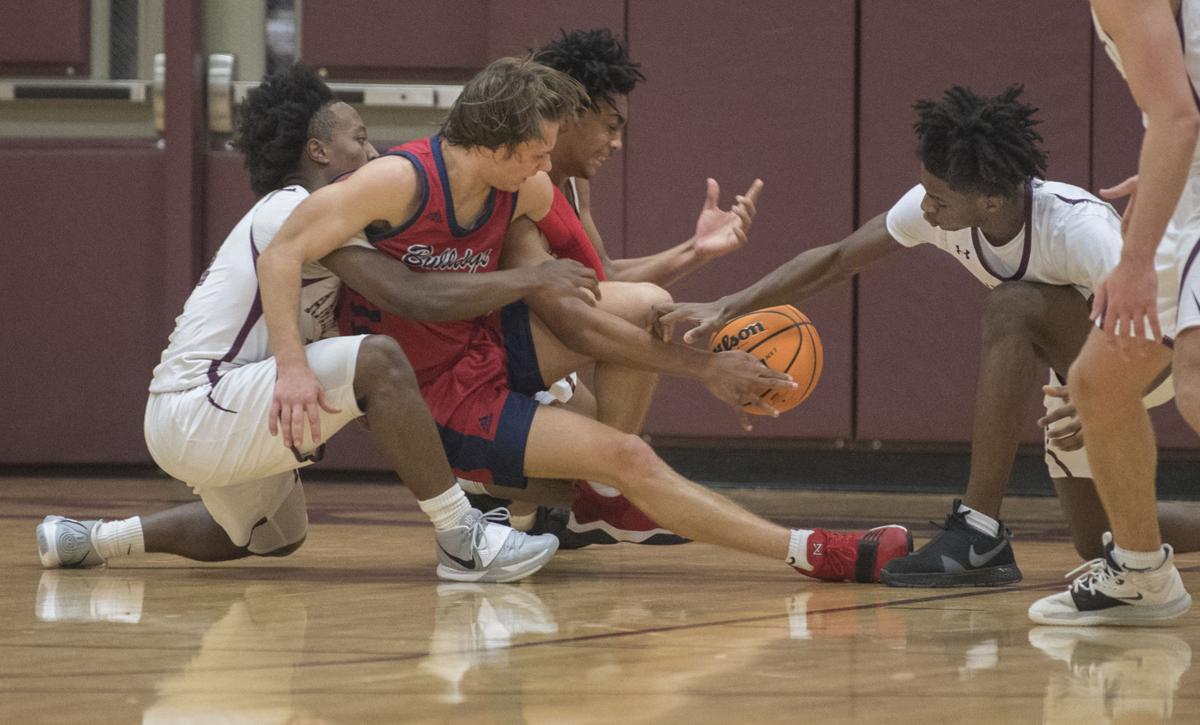 A single Liberty Christian player is surrounded by several Amherst players battling for a loose ball Thursday night in Amherst. 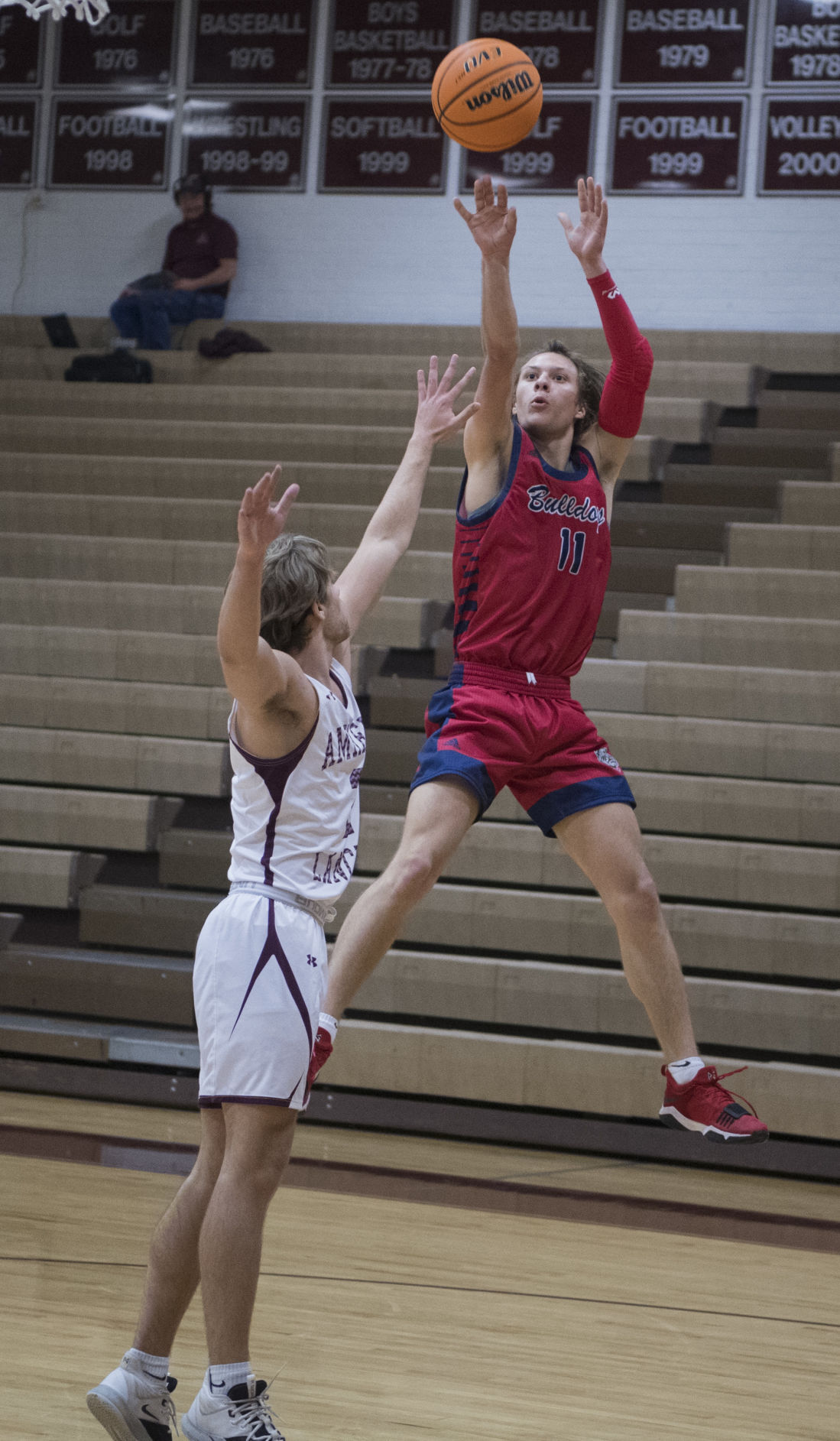 AMHERST — Shouts bounced off the walls in the hallway next to the gym at Amherst County High School late Thursday evening. These were sounds of jubilation amid an otherwise quiet atmosphere inside the sparsely populated building.

The cheers followed a momentous couple hours for the Amherst boys basketball team. After nearly a year of waiting, they’d finally gotten back on the court with teammates, donning crisp, white uniforms emblazoned with their program’s maroon lettering for their first game of the season. And, of course, the fact they’d just beaten one of the Seminole District’s heavyweights, Liberty Christian, certainly helped.

After trailing for the game’s first 17-plus minutes, Waugh and the Lancers took over in the second half, going on to capture a 53-47 victory over the Bulldogs.

“Glad we got [to play],” Amherst coach Segar Jordan said, admitting he had doubts about whether he’d even be able to lead his team in a game this school year amid the coronavirus pandemic. “And glad we got the W.”

Jordan’s squad was powered by Waugh, whose 7-0 scoring spurt to open the second half gave Amherst the lead and set the Lancers on the path to victory.

Waugh, who finished with 16 points, cut Lancers’ deficit to 26-24 when he somehow knocked down a short shot in the paint as he was fouled and fell the ground. He completed the three-point play, then added to his tally with a layup off an LCA turnover and two free throws resulting from a foul on his putback attempt.

“We were kind of slumping at the beginning of the half,” Waugh said. “I wanted to come out and finish some buckets and put some points on the board.”

The Lancers’ lead was 29-26 after he knocked down the shots from the charity stripe.

LCA and Seth Hildebrand pulled even at 38-all by the end of the third quarter, then again at 42-42 halfway through the fourth quarter. But Amherst, thanks to its offensive rebounding and ability to get out in transition, pulled away late.

ACHS (1-0) scored 10 straight over the next three minutes, including six points in a one-minute spurt.

The Bulldogs got an easy basket off an Amherst turnover and knocked down two free throws late to cut the Lancers’ lead to six, but time ran out on their comeback attempt.

“We didn’t execute the best,” LCA coach Paul Redgate said of his team’s offensive efficiency in the second half in particular. “I expected that a little bit with our first game back.”

Before Amherst’s second-half turnaround, the Bulldogs were the aggressors, leading by as many as 10 points in the second quarter.

Sully Holmes led LCA (0-1) with 16 points. He and Hildebrand did most of the work offensively by driving to the basket, but many of those contested shots came up short.

The Bulldogs were without five players Thursday, including reigning Seminole District Player of the Jalen Leftwich, who averaged 16 points per game last year.

Redgate said those players were all out because of issues related to COVID-19 or contact tracing.

“Some guys were thrusted into new roles,” Redgate said of his team, which only found out about those players being out a couple days ago, “and I think our guys played really hard. Give Amherst credit. They came out and executed and made some big-time shots.”

Amherst played to their advantage in numbers by getting baskets in transition, and, after settling for too many long jumpers early, drawing fouls by getting in the paint. Nine players scored for ACHS.

“They started to get a little too deep. … We try to limit the other team’s paint touches, and tonight we didn’t do a great job of that,” Redgate said.

“Amherst got into the paint almost at will in the second half especially, and that opened up a lot of opportunities for them.”

The Lancers missed some opportunities from the free-throw line, where they were 4 for 11, but tallying double-digit offensive rebounds helped offset those mistakes.

The Bulldogs weren’t good from the line, either, finishing 9 for 21.

“You’re not gonna win too many games if you do that. We’ve gotta knock down the easy ones,” Redgate said.

The coach said there’s plenty to work and improve on going forward, adding he hopes to have those missing players back soon.

Waugh and the Lancers, like others around the area, are hoping they can get as many games in as possible while dealing with the unpredictable nature of the season.

It was the height of summer, sometime in the early 1990s, and college-bound Lee Lewis posed for a photo beside a talented kid named Greg Hofma…

LCA came out on fire in the third quarter, using a 16-0 run to break away and earn their second victory in 48 hours over the Hilltoppers.

Justyn Fernandez led the Bishops with 32 points and six rebounds.

Some area schools set to begin winter sports this week, others still on hold

Play begins this week for teams in the Dogwood and Seminole districts, but some schools are still sidelined and plenty of uncertainty remains.

First prep games inside the Lynchburg area set for Thursday

Winter sports are underway. The Altavista boys basketball team opened the season for Lynchburg-area squads with a resounding 65-43 victory at …

Word around the Seminole District is that Haddon Smith can shoot.

With three of the seven teams in the Dogwood District currently unable to play because of coronavirus restrictions, Altavista's boys basketball team added a game to its schedule Wednesday: a road matchup against an old friend.

The Virginia Independent Schools Athletic Association will not hold a state wrestling tournament, although schools have the option to hold an unsanctioned invitational, VISAA executive director Dick Kemper said.

LCA forward Sully Holmes leaps to save ball from going out of bounds during Thursday's game at Amherst.

A single Liberty Christian player is surrounded by several Amherst players battling for a loose ball Thursday night in Amherst.