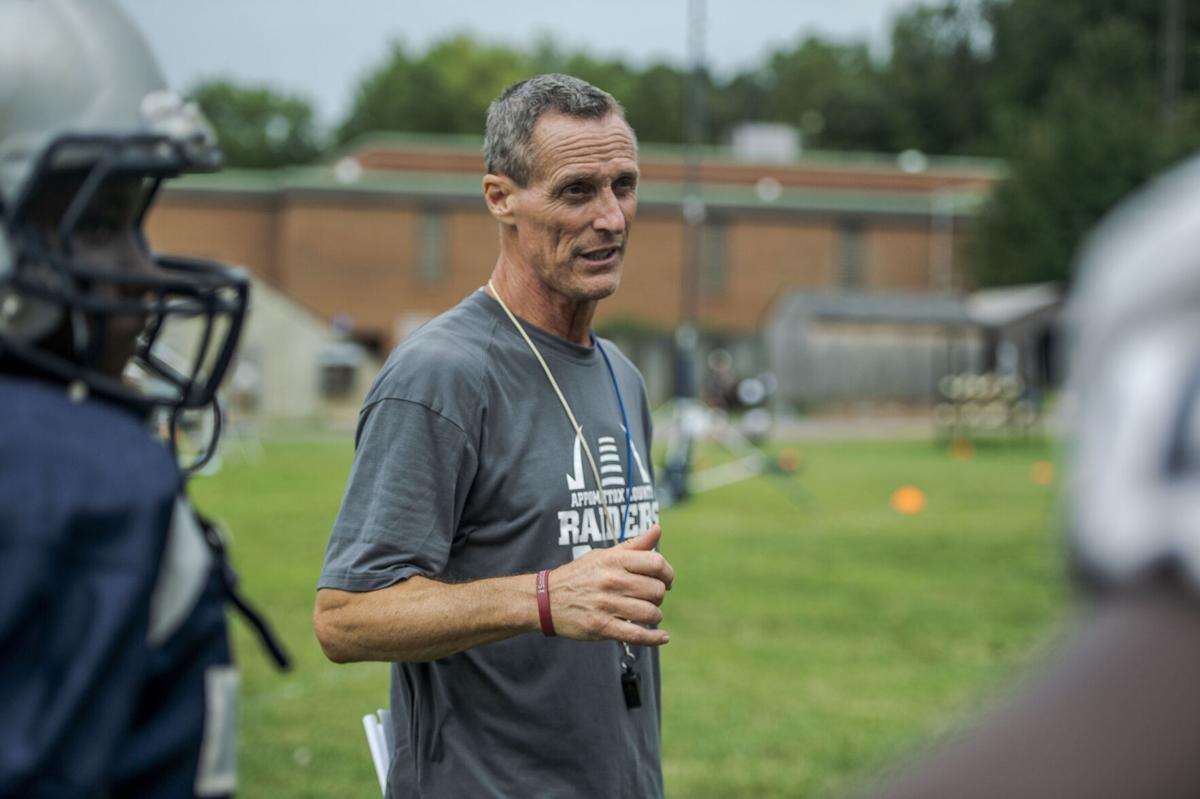 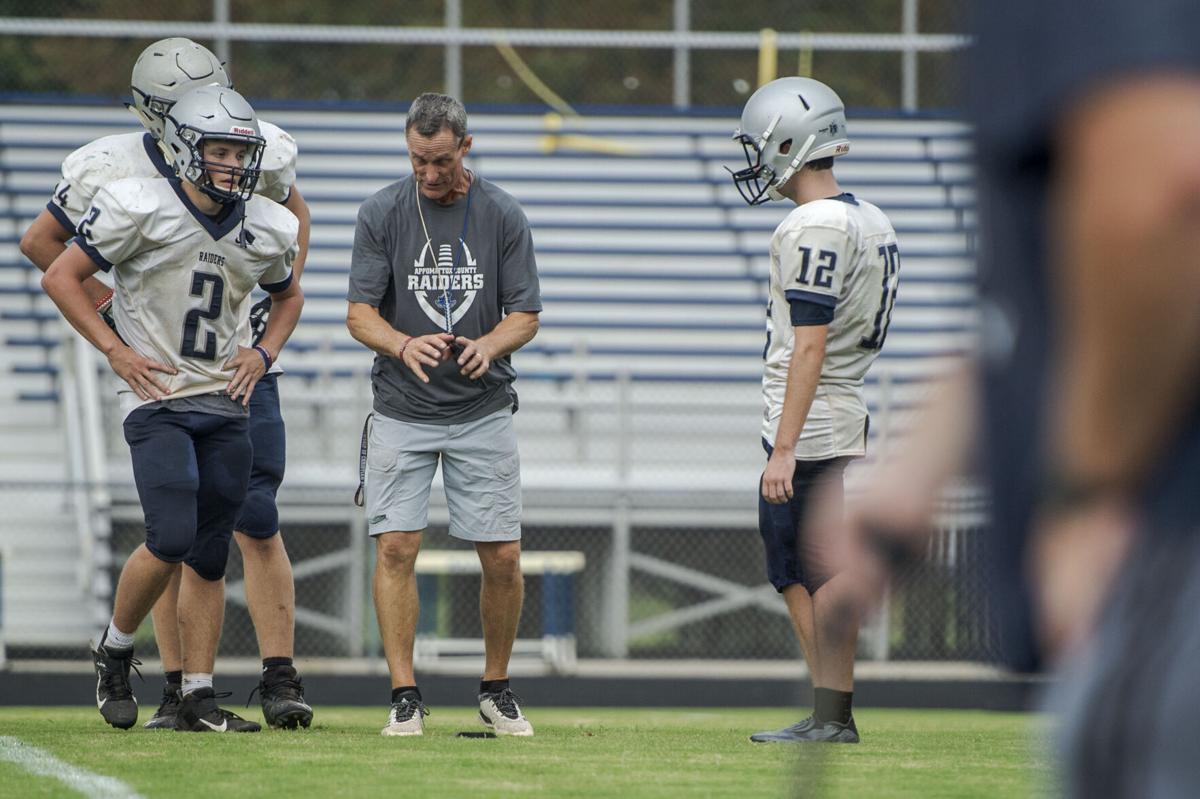 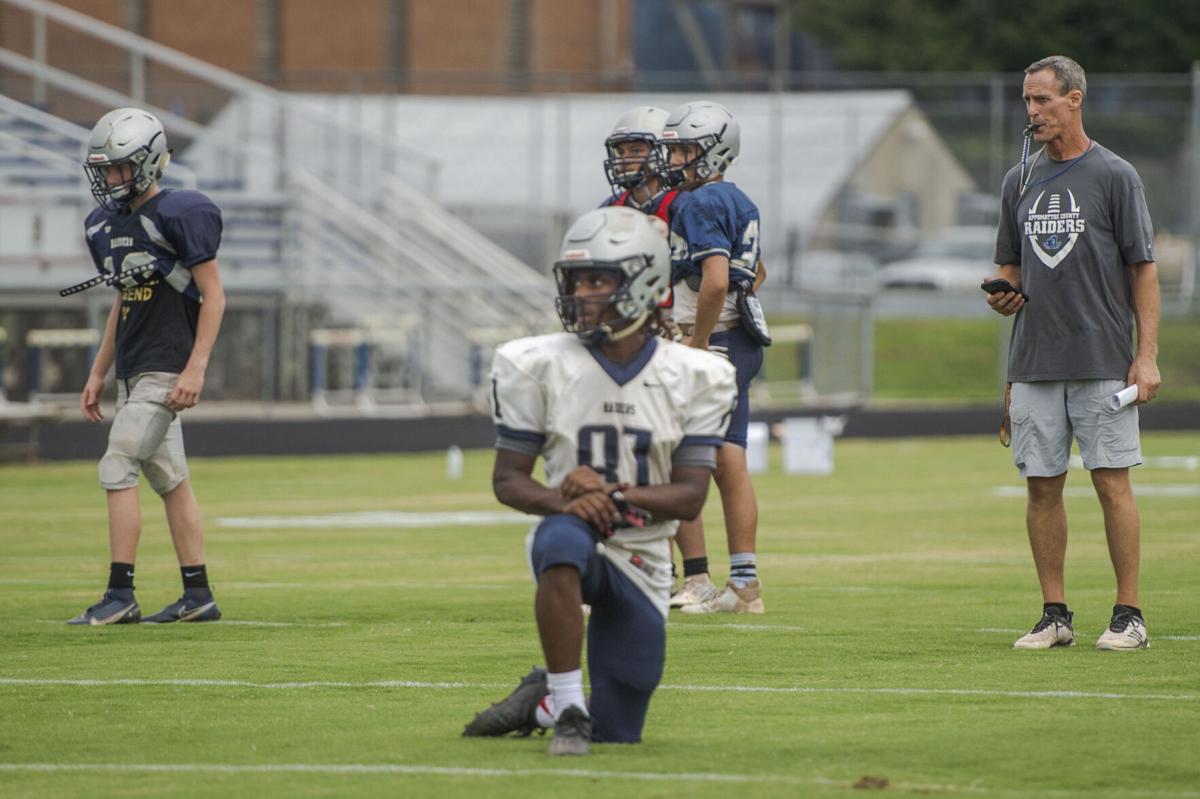 APPOMATTOX — Sometimes you don't realize how much you love something until it's gone.

That's the message Doug Smith has learned about getting back to the game he loves. He's back to practice sessions, back to working out regularly, back to the place he calls home, armed with a new sense that each day is a gift.

And on Friday, the Appomattox football coach will stand on the sideline at Bragg Stadium for the first time since 2019 as the Raiders open their season by hosting Rustburg at 7 p.m. Smith coached from home in the spring as he underwent treatments for multiple myeloma, which he was diagnosed with in the fall of 2020.

"Man, I love this," Smith said as Appomattox worked out Tuesday on its practice field adjacent to Bragg, which likely will be packed with fans Friday for the annual Battle of the Lantern. "You take it for granted sometimes. Just because of what God has done in my life, I want to explode and overflow to these guys what he's doing for me. And that's thankfulness, gratefulness, never take things for granted and just love every moment, good and bad."

He didn't always talk with this sort of confidence or carry himself with the same level of determination. Even his smile, the one that has always radiated with authenticity, appears different, now glowing with a joy that seems otherworldly. To understand that, you have to know that it's joy Smith asked for and it's joy that gets him through each day. You have to know there was a dark period of uncertainty that's been replaced with happiness.

After receiving his initial diagnosis, "those first eight days were a real struggle," Smith said. "I couldn't get peace, I couldn't find joy. I didn't know what was going on. It was almost like you're under attack by darkness."

He faced brutal facts. That multiple myeloma has no cure. That sometimes patients only live one or two years after being diagnosed. That his life would now be dramatically altered. That he may not be able to dance with his daughter Noelle at her wedding. That he may have to give up football. All of that weighed him down.

Then something clicked like a light switch for Smith, who has always been outspoken about his faith. "I need to start getting my life focused on what it needs to be focused on," he told himself. "That was kind of me getting my heart right, which helped me physically later down the road."

He went through 12 weeks of treatments that involved radiation, chemotherapy and injections. He spent 18 days at Duke Cancer Center in Durham, North Carolina. Underwent a stem cell transplant. Lost more than 20 pounds at one point and weighed in at 159.

Doctors told him to avoid detailed workouts during his recovery. Everything from pushups to squats to weightlifting to running would be permanently out of the question because there was too much of a chance Smith could suffer a broken bones. He could walk a mile a day, they said. Other than that, he'd have to make a complete lifestyle change.

Smith was undeterred. He began lifting to put to put on weight and exercises regularly. He works out with players at school and is back to working full time at Appomattox, after originally planning to only work three days a week. He's still undergoing tests and misses school sometimes but is always at practice. "I feel too good!" he said.

And Smith recently received good news: his most recent blood test showed no sign of cancer, and on Monday, his white blood cell count was up to 5.5, a level doctors told him not to expect. He is currently undergoing a six-week treatment and will have a more thorough bone biopsy Sept. 27.

"That's when they'll tell me if I'm good to go to one pill a day," Smith said, "and that's what I think is gonna happen. If not, I've got to do the transplant again. I'm not going around saying I don't have [cancer] because I don't know. I'm just telling you only God knows."

Smith had always planned to return for this season, but the timeline was uncertain. It all depended on whether he'd improved. Now, he said he's in no pain.

"It's honestly a blessing," senior quarterback Tre Lawing said. "We didn't even think he was gonna be back. Just having him here, it brings motivation. It makes us want to work harder. And with him pushing everybody, it makes us work 10 times harder every day."

With Smith at home during the spring, Appomattox claimed its fifth state title in six years. Defensive coordinator Stephen Castello stepped into the main coaching role and became the first interim football coach in Virginia High School League history to lead a team to a state title. Before preseason practices began in August, Smith already had informed Castello he'd have to reprise his role if Smith was unable to make a comeback. That still could happen if Smith has to undergo another stem cell transplant.

"He was the best find 10 years ago," Smith said of his longtime assistant. "One of the best friends. He's so loyal and unbelievable. ... The whole staff was great [in the spring season], and they really deserve all the credit."

Raiders center Jacob Williams was impressed Smith could rejoin the team. "God is good," Williams said. "He brought him back under circumstances when it looked like he wasn't gonna be able to come back this year. But having him back, it's allowed a lot of people to get one-on-on development that they didn't have in the spring because we were kind of short staffed."

A couple weeks ago, when Appomattox faced Liberty Christian in a scrimmage at Bragg, Smith looked around and took in the sights and sounds. Back in the spring, he didn't feel like talking on the phone or watching TV. He'd get excited for game times in front of his computer, but otherwise he had little energy. So to look around Bragg that day and realize how far he'd come was special.

It'll be even more meaningful Friday, his first official game on the sideline since Dec. 14, 2019, when the Raiders defeated Stuarts Draft in Salem.

"I think it'll be awesome," he said. "[The scrimmage] was unbelievable. I was like, 'This is crazy. I can't believe it. I didn't know this was gonna happen.'"

The coach did get that dance with Noelle, who got married over the summer. And he's living each day with a new sense of purpose and a greater faith than he had before his diagnosis. All while trying to push this team forward and perhaps to greatness once again.

"I'm just saying thank you, Lord," Smith said. "I just wanna praise his name and say he's a miracle worker. He's done things for me that I don't deserve. So I've got to testify. I've got to say what he's done for me has been a miracle."

Prep Football Roundup: Appomattox gets back on track, and more